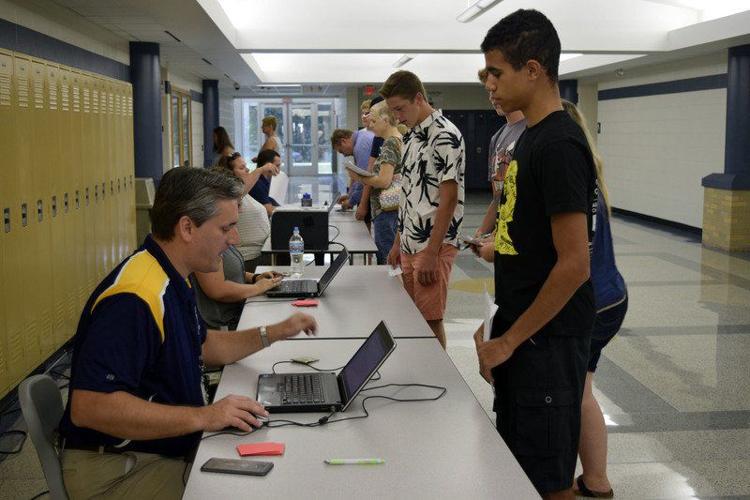 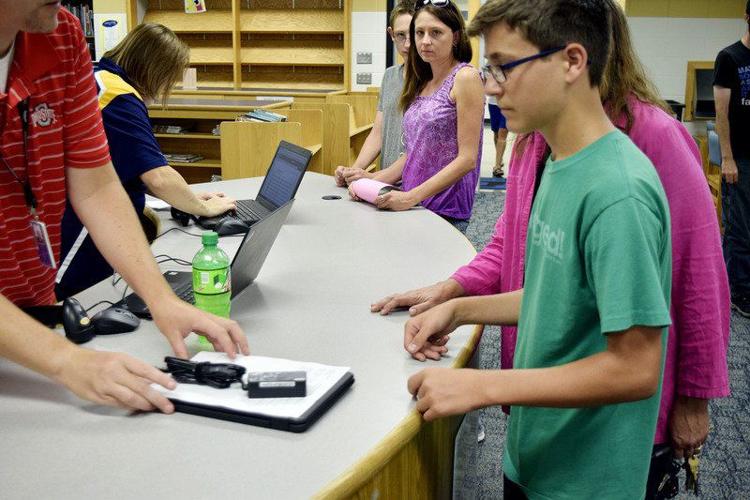 CHRISTINA CLARK | THE GOSHEN NEWS Riah Haarer, a freshman, and his mother Vanja, pick up his laptop from the media center for the school year.

CHRISTINA CLARK | THE GOSHEN NEWS Riah Haarer, a freshman, and his mother Vanja, pick up his laptop from the media center for the school year.

BENTON — Fairfield secondary-level students Monday were introduced to the new way they will learn.

Junior and senior high school students were handed laptop computers they will use to access all their course curriculums in their classes during the coming year. Providing laptops for each of the students is part of the district's 1-to-1 program effort to prepare the students for the work force and college, according to school officials.

"It's different, we'll have to get used to it," said Riah Haarer of having to manage his own laptop. "But other than that, I'm looking forward to it. We have done a lot of computer work for English, math, all the disciplines were on computers. So we did a lot of stuff on computers (before)."

The 1-to-1 program came about partially as a response to feedback from students who had graduated.

"One of the things we hear from people who graduate and going off to college, is that there's an expectation in college, or even in the work force, that students know how to work through modules, or work through online learning environments. We want to make sure students can do that," said Superintendent Steve Thalheimer.

The students will have a new tool to learn with this year, as well as new curriculum to adapt to.

"A lot of their course content will be on Google Suites for access to curricular materials. Our social studies and math curricula from the publishers are online, in addition to many of our vocational areas that have textbooks that are online like cosmetology and our vet tech program," explained Thalheimer.

The process to move toward a laptop program started five or six years ago, according to Thalheimer, when the school board was looking into new curriculum adoption.

"There was an innovation grant that was available, so we applied for that. Some of our senior boys helped us do a piece of that, which was a video. They did a phenomenal job on that video, especially since they had no stake in it. They just did it to help the school," said Fairfield Principal Amy Bertram of the transition to laptops.

After acquiring the grant, the school district's staff members did their research.

"We used that grant to do Five Star Technology, and to go to other schools and see what they did wrong, so we could try not to have the same pitfalls. So we did that all year long last year," Bertram said.

Having witnessed challenges in other programs, the school staff hopes to anticipate some challenges and have seen how other difficulties were addressed.

The goal for Monday, however, was to get the students their laptops and get them set up for their first day of class.

After receiving their laptop, students were directed to tables in the hallway to set up their machines.

An important step was "getting them logged in for the first time, to get all the updates on the computer before they leave," explained Nick Jones, assistant principal at Fairfield Jr.-Sr. High. "If they left before logging in, they wouldn't work."

As far as that process, Jones thought the process was going very well for their first time.

"It's just little things, remembering that their password has to have characters, and then the other thing is we had some students who had just registered yesterday and they did get into our computer system, but they didn't have their stuff set up yet. So far, I'd say that's almost perfect, smooth sailing," he said.

The computers give students a little more responsibility, as well as freedom. There are restrictions on the use of the Lenovo ThinkPad laptops, but that is mostly within the school's walls.

"The restriction is mostly on our network, so someone was asking me 'can I use Facebook at home?' Yes, because it's going through your network. When you come here: No. Same with YouTube. It'll work at home, but here it is restricted use and the teacher has to approve content before it's available to students. We have firewalls in our systems, but other than that, not a lot (of restrictions)," Jones said.

Students at Fairfield Jr-Sr High begin classes, with their new technology set up and ready to go, on Friday.

Christina Clark may be reached at christina.clark@goshennews.com or at 574-202-8722.

Do you think free, open recycling sites are necessary in Elkhart County/Goshen?

Elkhart County is shutting down its last recycling site by the end of March because of public misuse. During the Jan. 23 Goshen City Council meeting, Mayor Jeremy Stutsman mentioned the city will be opening a recycling site before the last county site shuts down. This city site will be monitored by cameras and fines issued for misuse. There will also be public education on what to leave at the site. Do you think free, open recycling sites are necessary in Elkhart County/Goshen?