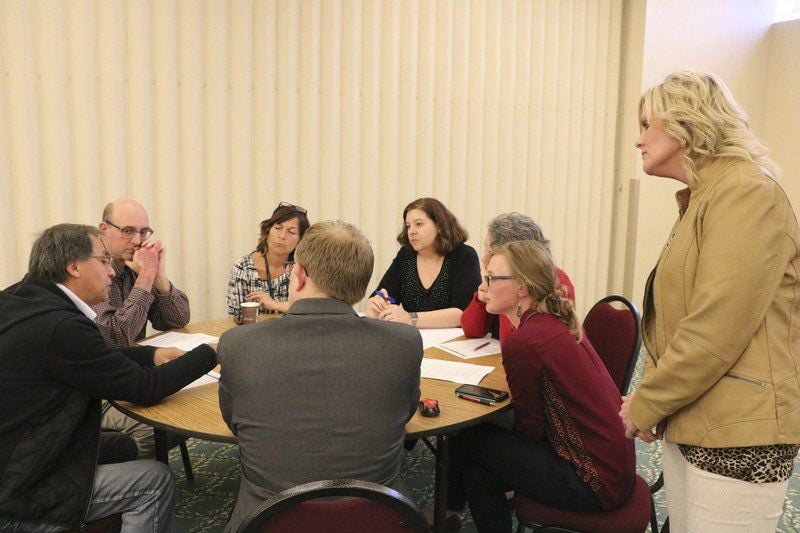 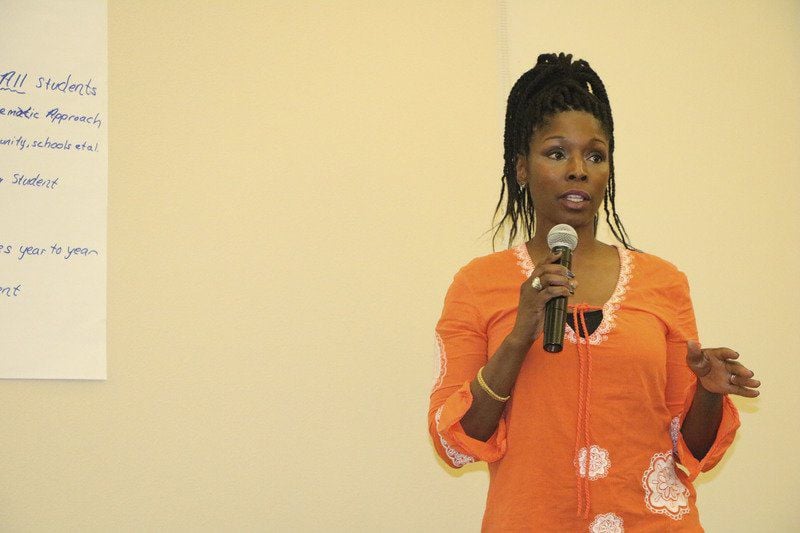 SHEILA SELMAN | THE GOSHEN NEWSTessa Sutton with Elkhart Community Schools presents her group's ideas and suggestions Tuesday evening at Goshen College's Church-Chapel following their discussion on how to support all students while meeting new federal education requirements as the state develops its plan for Every Student Succeeds Act. 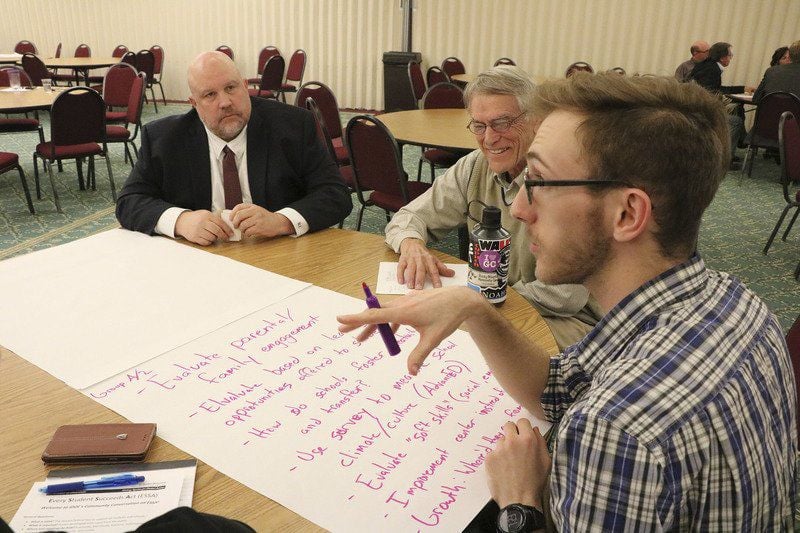 SHEILA SELMAN | THE GOSHEN NEWSTessa Sutton with Elkhart Community Schools presents her group's ideas and suggestions Tuesday evening at Goshen College's Church-Chapel following their discussion on how to support all students while meeting new federal education requirements as the state develops its plan for Every Student Succeeds Act.

GOSHEN — Educators and parents brainstormed Tuesday night at Goshen College’s Church-Chapel, helping state officials chart a path for its plan for the Every Student Succeeds Act.

ESSA, a federal law passed in 2015, replaces No Child Left Behind. Indiana State Superintendent of Public Instruction Jennifer McCormick told the crowd said she wants to “make sure voices are heard.”

Goshen is just one of the stops state officials are making in March. McCormick said the Department of Education is trying to host meetings in each of the state’s nine congressional districts.

“This is a really good turnout,” she said.

With McCormick were Patrick McAlister, policy director for the IDOE, three members of the Indiana State Board of Education and someone to film the responses.

McAlister presented the timeline for the plan, with final submission to the U.S. Department of Education set for Sept. 18. But first, the plan must be submitted to Indiana Gov. Eric Holcomb in August.

Those who attended the Goshen College session — mostly educators from throughout Michiana — divided into teams to take on those group discussions. One of those teams was for those who preferred speaking in Spanish and mainly consisted of parents.

The groups had 30 minutes to brainstorm and then present their findings.

Cathy DeMeyer, a science teacher at Goshen High School and president of the Goshen Education Association, was one of the presenters. After hearing all of the groups, she said, "It's reassuring that the community is on the same side as the teachers (making sure students can flourish and grow). I love hearing that we all feel the same way."

The findings all had similar themes:

• How can schools best measure student progress? The suggestion was to use nationally known tests to assess academic achievement and to use multiple assessments.

• How can that progress be best reported to families and to the public?

• Are students proficient and ready for the workforce or college when they graduate?

• How well are students doing after high school? How can that be measured?

• How can schools become more creative to better adapt to changing cultures?

• Look at the student as a whole and not just on how they do on tests.

• Make the DOE website more dynamic and in multiple languages; perhaps develop a mobile app that is user-friendly.

• Latino students may have a learning curve in English, but they still have skills in other areas such as math. Keep them engaged in those areas.

• Communicate with families in Spanish and English.

• How do schools retain teachers?

• Schools should have sustained financial resources for consistency in program development.

• Staff should have training and collaboration time during their school day.

• Evaluate school systems on their growth and not just pass/fail.

State officials plan to have the document drafted and submitted by June 30. At that point, it will be open for public comment throughout July.

McAlister said there will be an online version of this meeting from 6:30 to 8 p.m. April 24, using the same outline. For more information about these meetings or ESSA, people can contact McAlister at pmcalister@doe.in.gov.

The group notes will be posted at the ESSA website doe.in.gov/essa.