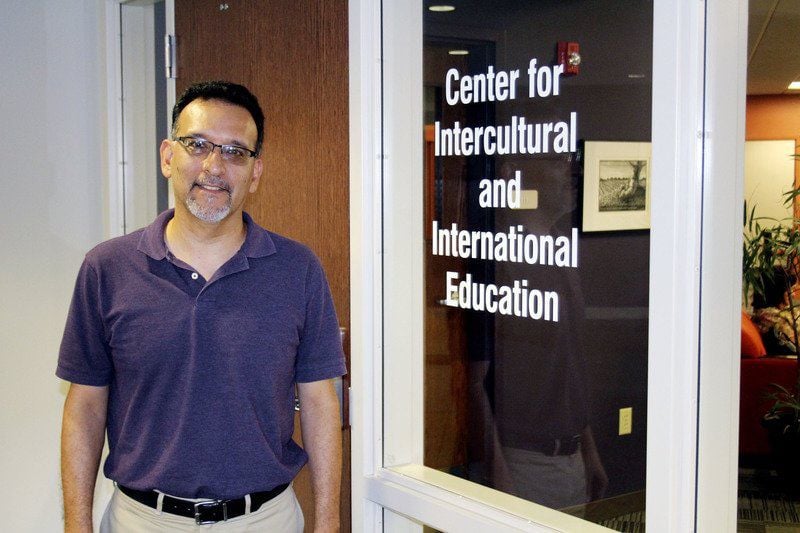 JOHN KLINE | THE GOSHEN NEWSGilberto Perez, senior director of Intercultural Development & Educational Partnerships at Goshen College and one of 40 torchbearers nominated to participate in Elkhart County’s portion of the Indiana Bicentennial Torch Relay Oct. 4, stands near the entrance to his office at the Center for Intercultural and International Education at the college Wednesday afternoon. 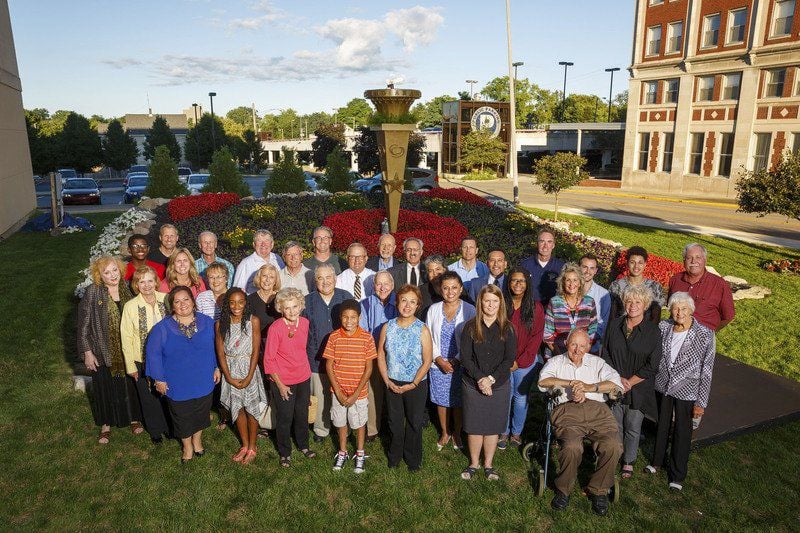 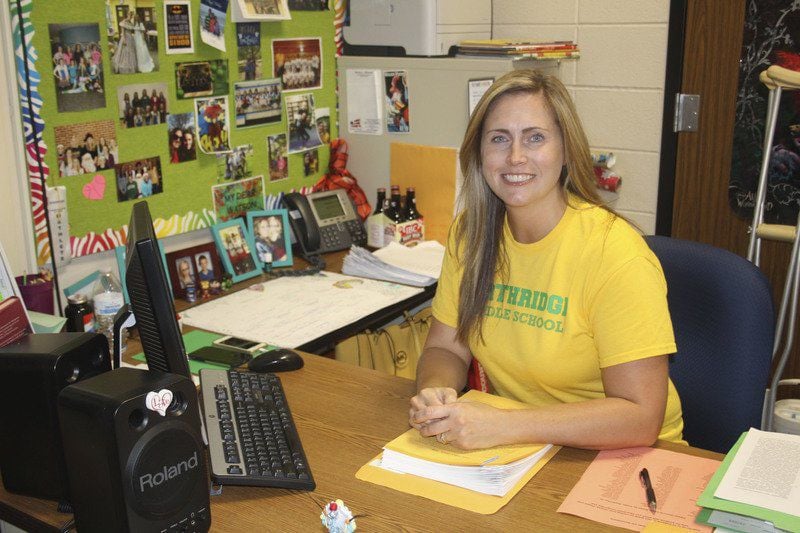 JOHN KLINE | THE GOSHEN NEWSJudith Mantyla, a teacher at Northridge Middle School and one of 40 torchbearers nominated to participate in Elkhart County’s portion of the Indiana Bicentennial Torch Relay Oct. 4, sits at her desk at the school Wednesday afternoon.

JOHN KLINE | THE GOSHEN NEWSGilberto Perez, senior director of Intercultural Development & Educational Partnerships at Goshen College and one of 40 torchbearers nominated to participate in Elkhart County’s portion of the Indiana Bicentennial Torch Relay Oct. 4, stands near the entrance to his office at the Center for Intercultural and International Education at the college Wednesday afternoon.

JOHN KLINE | THE GOSHEN NEWSJudith Mantyla, a teacher at Northridge Middle School and one of 40 torchbearers nominated to participate in Elkhart County’s portion of the Indiana Bicentennial Torch Relay Oct. 4, sits at her desk at the school Wednesday afternoon.

GOSHEN — While Elkhart County residents Gilberto Perez Jr. and Judith Mantyla may not be running marathons to prepare for their role as torchbearers in Indiana’s upcoming Bicentennial Torch Relay, that doesn’t means they aren’t taking the job seriously. In fact, nothing could be farther from the truth.

Perez Jr. and Mantyla make up two of the 40 area residents nominated to participate in the county’s portion of the bicentennial relay. Patterned after the Olympic Torch Relay, the 3,200 mile state relay will pass through all 92 Indiana counties and will serve as one of the major commemorative events of the 2016 Bicentennial celebration.

The county’s torchbearers, who represent outstanding contributions to education, arts and culture, business and public service, will be walking, jogging and riding vehicles symbolic of Indiana’s history and heritage beginning from the relay’s starting point at the MyBrook dairy farm, 57922 C.R. 43, Middlebury, at 9 a.m. Tuesday, Oct. 4. Following the kickoff, the torch will then continue on a 52-mile, 5.5 hour trek through Middlebury, Elkhart, Goshen and Wakarusa before ending at Amish Acres in Nappanee at about 2:30 p.m.

Currently serving as senior director of Intercultural Development & Educational Partnerships at Goshen College, Perez Jr. has been a Goshen resident for the past 15 years, having moved to the area from Puerto Rico where he was practicing social work. He would continue that practice for the next 12 years, primarily in the areas of Ligonier and Noble County, before eventually making the shift over to the college to teach social work.

“I felt very honored that someone from the community would consider me worthy to carry the torch for Indiana, and surprised as well,” Perez Jr. said of his nomination as one of the county’s 40 torchbearers. “I didn’t expect to be nominated for that, so I was surprised and happy.”

Speaking to his preparations for the upcoming relay, while he hasn’t implemented any new training or exercise routines — he’s only running a quarter of a mile — Perez Jr. said he has been taking advantage of much of the available information and training materials being provided through the county’s bicentennial committee at the direction of committee co-chairs Sonya Nash of the Elkhart County Convention & Visitors Bureau and Elkhart County Redevelopment Coordinator Laura Coyne.

“This has all been wonderfully organized by the folks who are leading this from our convention and visitor’s bureau,” Perez Jr. said. “Sonya Nash, I only have great things to say about her leadership with what has been happening, and organizing and sending out information. I have been to one meeting, and while I have not been able to make any of the training sessions in terms of the different locations, I have worked on the videos that they’re sending for us to see how to carry the torch, those kinds of things. I know it’s only a short jaunt, but it’s my responsibility to carry the torch, so I feel honored to do that and want to carry it proudly for all the people who have come before us here in Indiana that have done really good work to make the state what it is today.”

While Perez Jr. plans on running for his leg of the relay, Mantyla, a language arts teacher with Middlebury Community Schools currently living in Goshen, will be teaming up with fellow torchbearer and Middlebury educator Nancy Hannah to carry the Bicentennial Torch on an Amish-driven horse-drawn carriage.

Mantyla, formerly of Michigan, arrived in Goshen 10 years ago when her husband, Scott, took a job with Lippert Components. Together they have a son, Avery, a freshman at Northridge High School, and a daughter, Julia, a seventh-grader at Northridge Middle School.

In addition to her job as a teacher, Mantyla also coaches girls’ basketball for the corporation and serves as one of two Student Council advisers. She also helped found the corporation’s eighth-grade Civics in Action program, and was recently awarded the Middlebury Chamber of Commerce Volunteer of the Year award.

“My husband was the one who actually nominated me, so I didn’t know about the relay until I got the news that I had been chosen,” Mantyla said of her selection as a torchbearer. “It’s very exciting to be able to be part of such a big event.”

Given that she will be riding in a horse-drawn carriage for her leg of the relay, Mantyla said she hasn’t been doing much physical preparation for the event, though like Perez Jr. she is taking full advantage of the various training and informational materials being provided by the county bicentennial committee.

“The committee has done a great job of organizing different events and things like that for us to take part in, and training, and working out the route, etc.,” Mantyla said. “To be honest, I really just have to show up and make sure I carry the torch properly. So its been a pretty smooth process so far.”

Speaking of the torch, Mantyla said she’s looking forward to getting to use some of its neat, high-tech features, such as an embedded camera capable of taking selfies.

“We’ve been able to see the torch, and feel how light it is, and there are also a lot of neat features that go along with it that make it pretty cool,” she said. “They had a little training session to talk to us about how to go through the process of carrying it, because the torch itself has the capability to take photos and video clips along the way so that you can see the hand-off, and the crowd along the route, etc.”

As for the chance to ride in the carriage with a fellow educator from her school corporation, Mantyla said that’s just icing on the cake.

“That was one of the things that the committee was able to do that was really nice,” Mantyla said of the opportunity to share the carriage with Hannah. “They were able to make adjustments to the route so that both of us could be carrying the torch in close proximity to the school. So we’re pretty excited.”

For a full list of county torchbearers as well as dates, times, locations and background for the relay, visit https://elkhartcounty2016.com.