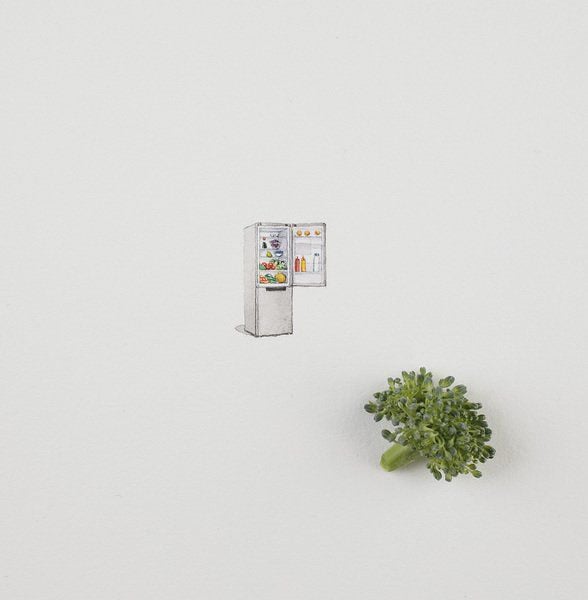 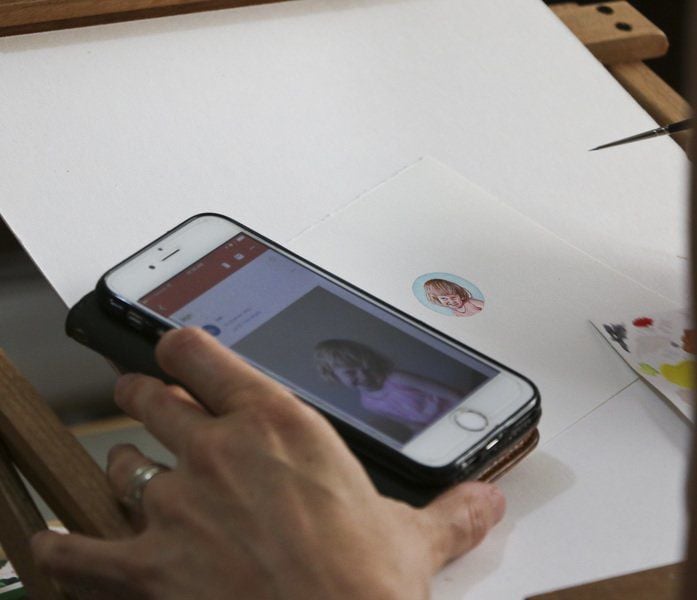 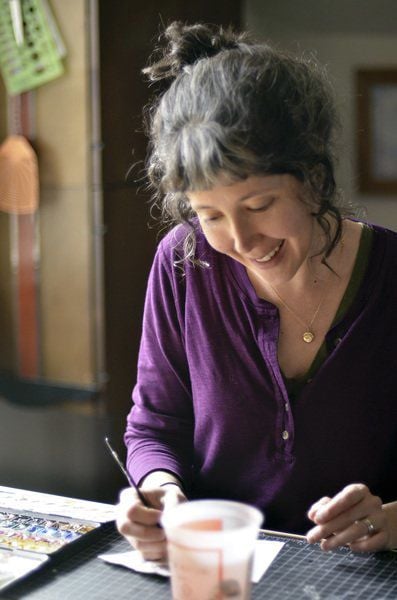 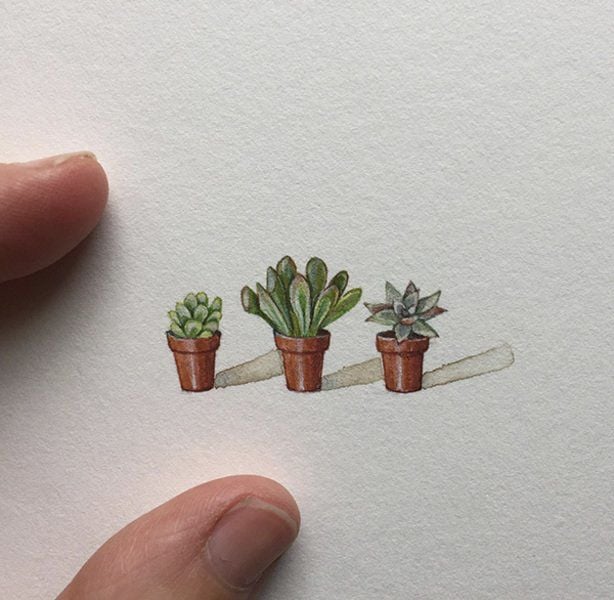 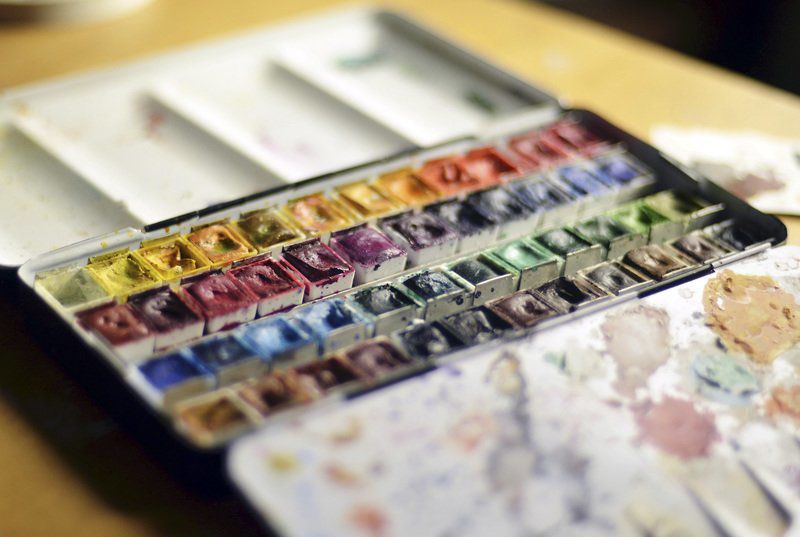 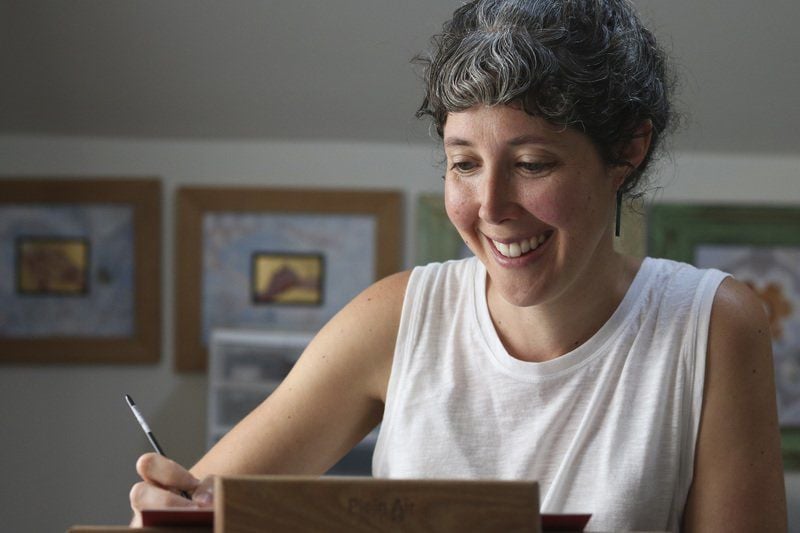 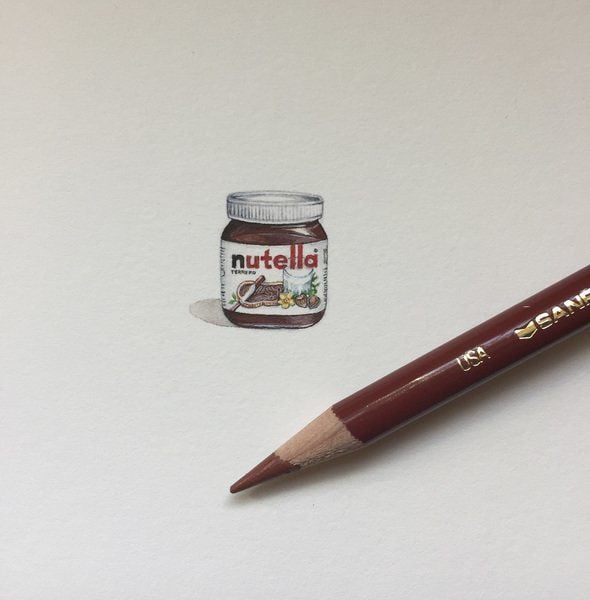 PHOTO CONTRIBUTED | GRANT BEACHYA miniaturized drawing of a jar of Nutella is shown. 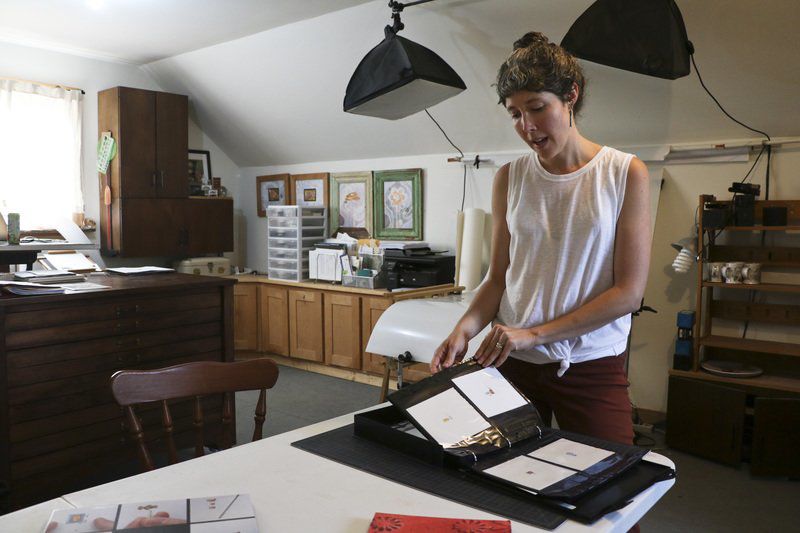 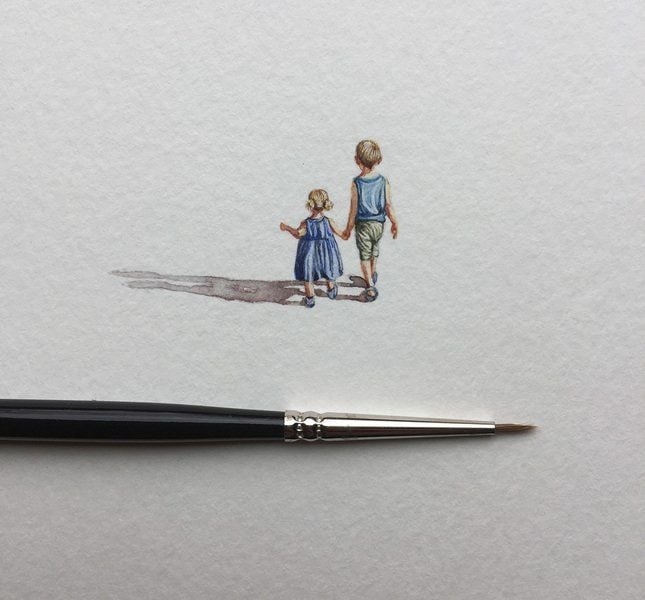 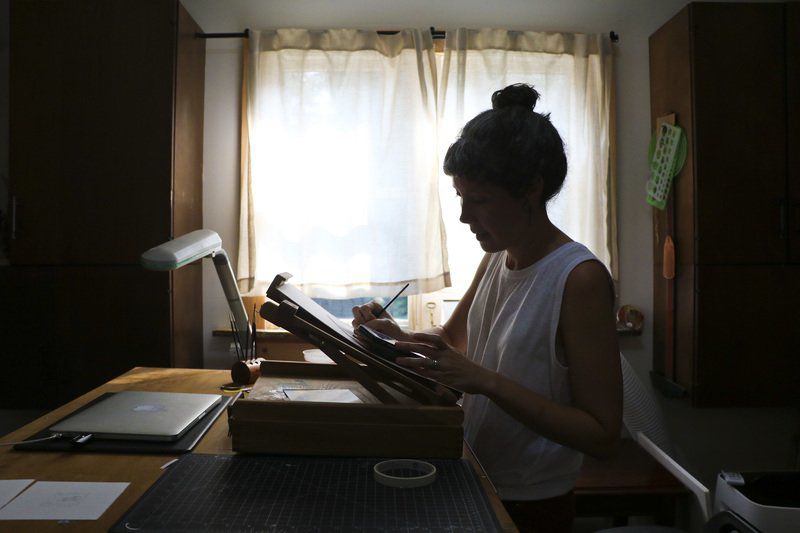 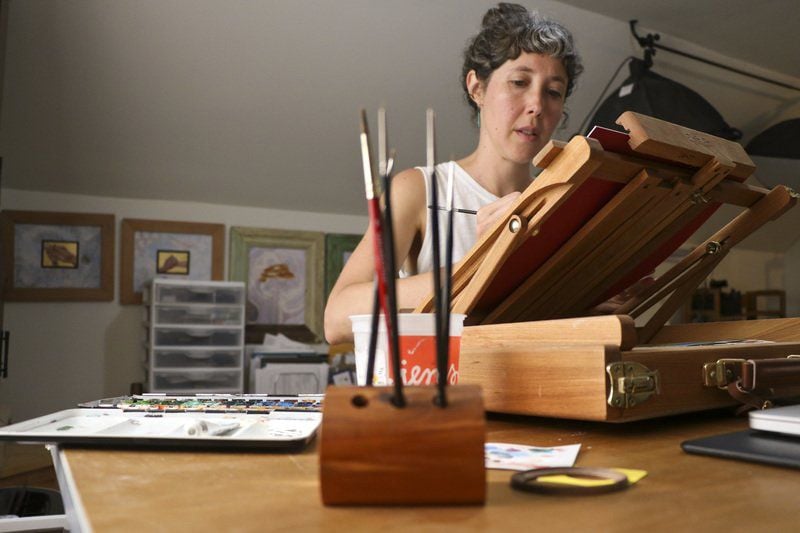 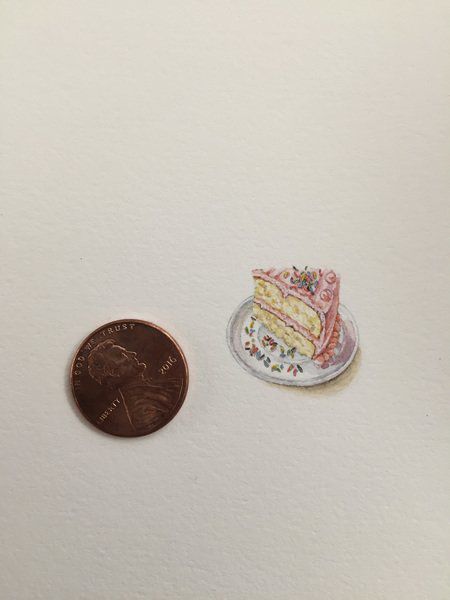 PHOTO CONTRIBUTED | GRANT BEACHYThis miniature drawing is about the size of a penny. 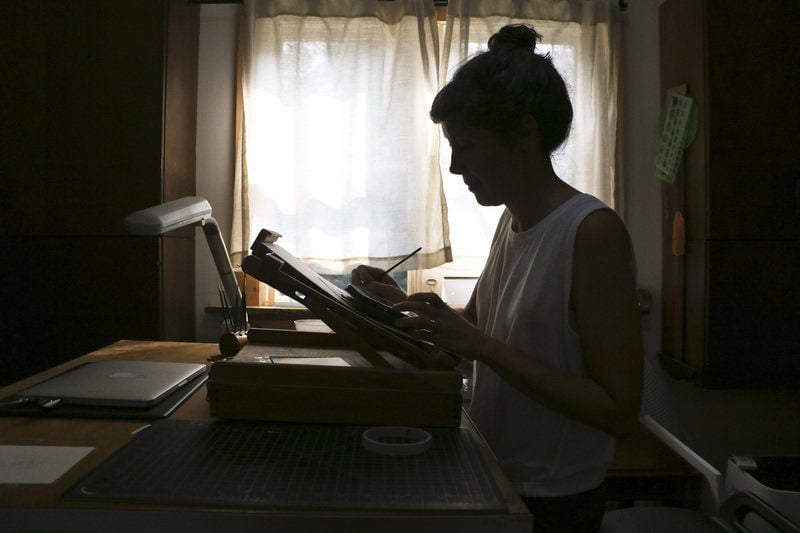 PHOTO CONTRIBUTED | GRANT BEACHYA miniaturized drawing of a jar of Nutella is shown.

PHOTO CONTRIBUTED | GRANT BEACHYThis miniature drawing is about the size of a penny.

GOSHEN — Brooke Rothshank paints small things. As in tiny things with tiny brushes. Her art is confined to the center 1-inch square on 6-by-6-inch white paper, looking starkly insubstantial surrounded by all that empty space. Frequently, her subjects seem insubstantial too. Then the conversations start.

Take her watercolor Nutella jar, a stamp-sized delight that elicits smiles and memories of sitting at the kitchen table, furtively spreading chocolate on bread and calling it lunch.

Then there’s a wrinkled pair of shrunken gardening gloves. And a snapshot of two children holding hands.

Her studio features a window-lit table where she has painted miniature portraits, tiny teacups, a battery, a goldfish in a bowl the size of a thumbnail — in short, a litany of everyday things.

Most recently, Rothshank and her potter husband, Justin, wrapped up a series of 52 paintings. The collection was a visual journal of small gratitudes, one for each week in 2017. The couple collectively designated the resulting 104 art pieces as the “Gratitude Project.”

2016 was a difficult year for the Rothshanks, Brooke explained. Relatives died. And their third child, a girl they named Bryn, was still recovering from life outside the NICU after being born seven weeks early.

“Just politically, in the world … it was a tough year for a lot of reasons,” she said. “We wanted to find ways to not be focusing on the hard stuff all the time. We decided we wanted to be looking for gratitude. … We were both doing our own thing, but then coming together at the end of the week.”

Rothshank flipped through an album of prints from the Gratitude Project, pointing to a slice of birthday cake. “That was Bryn’s gestational birthday, and so that’s a special one. All these do have a different meaning.”

Next was a miniature painting of an open refrigerator. She painted it the week the family returned from vacation to find their essential kitchen appliance had died.

“Fortunately for us, my parents had stopped over … (and) discovered what had happened. And they cleaned it out for us. Even though it was a mess and it still stunk, it was really wonderful that they had taken out the rotten chicken in the freezer,” she recalled. When the time came for her to choose a token symbol of gratitude for the week, a refrigerator made sense. She was grateful for her parents’ help. She was grateful the family could afford a new refrigerator.

“There were a lot of things to feel good about even though that was not an awesome thing that happened,” she continued. “So it’s the idea of retraining your brain to look for ‘What are the things I can see that are good even in a situation that might not be ideal?’”

She cautioned against interpreting the practice too seriously. Forcing themselves to find the small gifts everyday, no matter the situation, affected their year in quiet ways more than by providing a life-changing shift.

“So there were definitely times when one or the other of us was like, ‘I still have to do my gratitude thing!’” she laughed. “Because of kids, things get busy. We want to find ways we’re accountable for how we live and how we are examples to our children.”

Though most of Rothshank’s project paintings are of objects rather than individuals, it is clear her children have played a part in the shape of her life today. In fact, though she had been immersed in the world of miniatures for a while, it was the birth of her second child that spurred her to confine the work to 1-by-1-inch watercolors.

In 2014, for instance, she developed a practice of completing one tiny piece a day.

“I was feeling stuck in the studio with not enough time to finish (a full 1/12-scale miniature painting). These little watercolors were something that I could finish in one naptime. That felt good because I could be productive, and it was a way for me to commit to art-making. That consistency, I have found, is really key for a lot of things,” she said.

The last daily painting from 2014 is an ultrasound image: she and Justin were expecting their third child, Bryn, impelling a more dormant creative season for Brooke — until the Gratitude Project.

Rothshank’s dedication to a consistent artistic practice has taken a different turn this year. Her studio time is deliberately fragmented between commissioned work, a miniature advent calendar and an offshoot of the Gratitude Project: a book, set to be released in October by Parallax Press.

“It’s called ‘Tiny Gratitudes,’” she said. “Our goal was we would share the work once the project was complete.” The book will include all 52 paintings alongside her meditations chronicling the images.

In the book and otherwise, the stories behind Rothshank’s tiny art pieces are part of the magic. The objects are often less important than the memories they invoke. The same goes for commissioned work, which are often paintings of children’s objects or nostalgic bits and bobs such as bottle caps or coins.

“Miniatures remind me of jewelry, which is a very personal gift,” she said. “... They can represent for people a meaningful or very special moment in time. I’ve thought about it in different ways. But with jewelry, I think about how you need to be up close to see it. With miniatures, you draw close to it and have to share this small space to appreciate it.”

Brooke will have a gallery show Sept. 22 at Artlink, 300 E. Main St., Fort Wayne. She will have advance copies of “Tiny Gratitudes” for viewing.

Her work will also be shown in November at the American Midwest Museum of Art, 429 S. Main St., Elkhart.