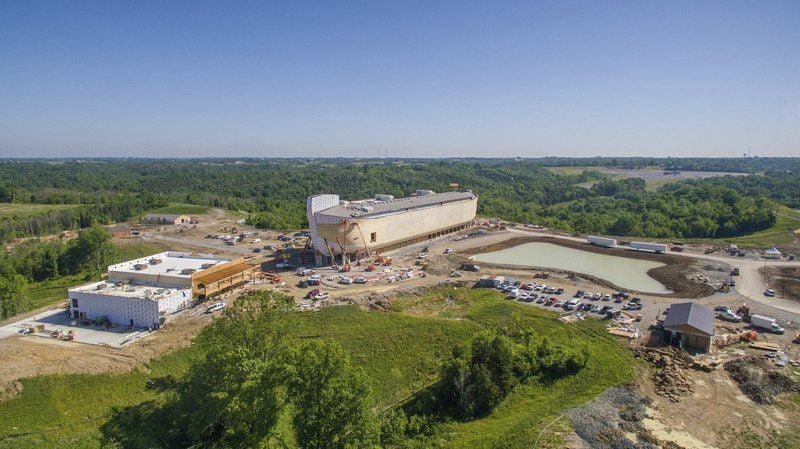 PHOTO CONTRIBUTEDThis aerial photo shows the Ark Encounter attraction in Kentucky that will open to the public Thursday. 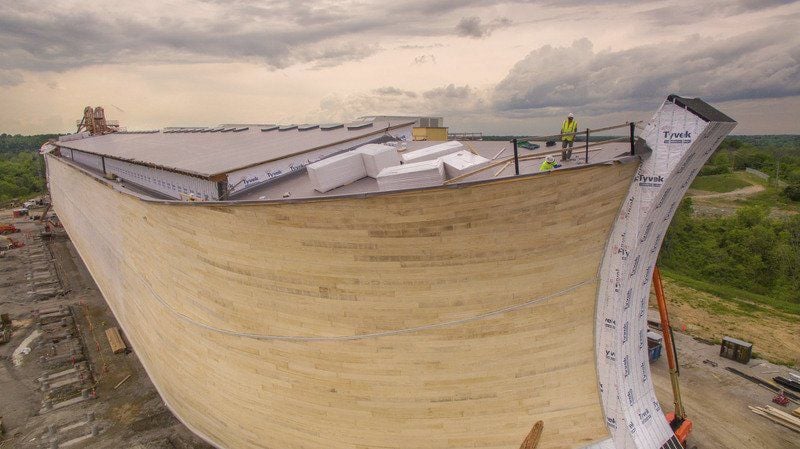 PHOTO CONTRIBUTEDWorkers are dwarfed by the reproduction Noah's Ark that has been created in Kentucky to tell the story from the Book of Genesis. 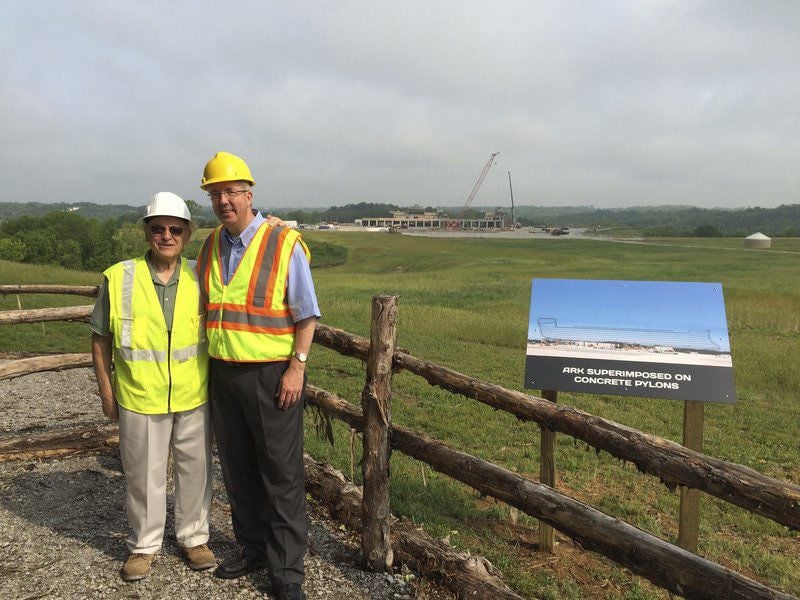 PHOTO CONTRIBUTEDLeRoy Troyer, left, and Craig Baker, a member of the Answers in Genesis and Crosswater Canyon board of directors, stand together with the Ark Encounter project in the background. 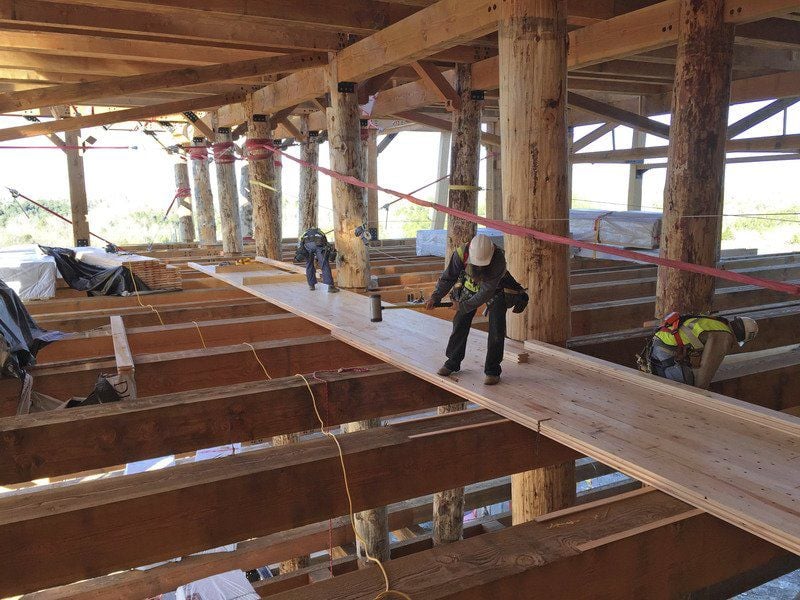 PHOTO CONTRIBUTEDWorkers lay the flooring inside the Ark Encounter, which features timbers processed in Elkhart County. 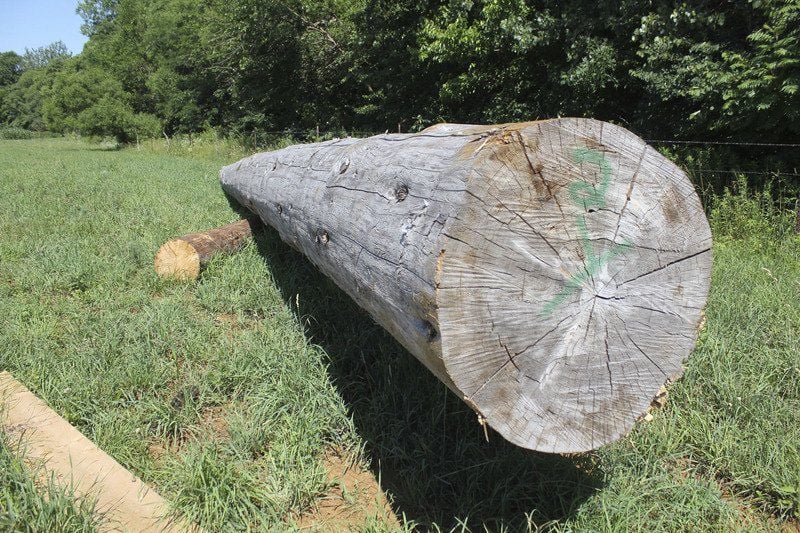 ROGER SCHNEIDER | THE GOSHEN NEWSThis large Englemann spruce log rests at the Bontrager sawmill shop east of Benton. Other similar logs were processed at the shop for the Ark Encounter project in Kentucky.

PHOTO CONTRIBUTEDThis aerial photo shows the Ark Encounter attraction in Kentucky that will open to the public Thursday.

PHOTO CONTRIBUTEDWorkers are dwarfed by the reproduction Noah's Ark that has been created in Kentucky to tell the story from the Book of Genesis.

PHOTO CONTRIBUTEDLeRoy Troyer, left, and Craig Baker, a member of the Answers in Genesis and Crosswater Canyon board of directors, stand together with the Ark Encounter project in the background.

PHOTO CONTRIBUTEDWorkers lay the flooring inside the Ark Encounter, which features timbers processed in Elkhart County.

ROGER SCHNEIDER | THE GOSHEN NEWSThis large Englemann spruce log rests at the Bontrager sawmill shop east of Benton. Other similar logs were processed at the shop for the Ark Encounter project in Kentucky.

It’s the first ark LeRoy Troyer has ever designed, so he used the only plans he could find, those from the Book of Genesis.

Troyer, a Middlebury resident, is the architect for the Ark Encounter project in Kentucky that has constructed a duplicate of Noah’s Ark along I-75 in Williamstown as a way of educating the public about the Old Testament story of Noah and Christianity in general. The attraction will open Thursday and its grand opening will run for 40 days and 40 nights, as part of the recognition of the biblical account of the rainfall that created the great flood Genesis describes. Troyer said a study predicts up to 1.6 million people could visit the attraction annually.

“This is an outgrowth of the Creation Museum...” Troyer said and added, “It is really great to be able to tell the Bible story.”

The attraction will also tell the story of Jesus and the Christian path to salvation. The $120 million project will eventually have a 1,500-seat restaurant, Noah’s village, a replica of the Tower of Babel and exhibits that will tell the story of the Israelites exodus from Egypt and possibly a small 1st century Nazareth village. There will also be theaters, an aviary and other items, according to Troyer. He said it will take 10 to 12 years to complete all of the project on the 800-acre site.

The ark portion of the project had a budget of $70 million, which included land acquisition, site preparation and other work. Inside the ark are 132 exhibit spaces.

“This replica is an example of what may have been,” Troyer said. “We don’t know what it (the ark) was, but according to Genesis there was winds and waves and it didn’t roll over.”

He said an expert on ships was a consultant on the project and everyone involved drew heavily on the story of Noah in Genesis when designing the project. The ark is 510 feet long and more than four stories tall. Humans standing in its bow are dwarfed by the ark’s size.

“For me it is more than a building,” Troyer said, “It’s the purpose behind it.”

The creation museum was founded by Ken Ham, who believes the Book of Genesis is a literal account of the earth’s creation and early years. The story of Noah, his ark full of plants and animals and how God used a planet-wide flood to rid the earth of all humans except Noah, his wife, their three sons and wives, who God deemed as righteous, covers chapters 6 to 9 in Genesis. Ham is also the founder of Genesis is the Answer, which is developing the ark-themed attraction.

How he got involved

“I grew up on a farm southwest of Middlebury south of the Essenhaus on C.R. 22 and on an Amish farm,” Troyer said.

Amish teens often end their education after the eighth grade and that was something Troyer found he needed to work around when he decided to apply to attend the University of Notre Dame.

“I wanted to be an architect since fourth grade,” he said while on the phone from the ark building site.

He was able to enter Notre Dame and graduated in 1971. He now is part of his family-owned architecture and engineering company The Troyer Group in Mishawaka.

Based on his company’s experience with other religious and timber frame projects and through a series of references and contacts, his company was hired in 2009 to be the planner and architect for the Ark Encounter’s master plan. He pointed out that he has relied on other experts for advice and planning of many aspects of the project.

Among the many projects his company has designed are the Countryside Farmers Market in Elkhart and the Nazareth Village attraction in Nazareth, Israel, which is a reconstructed village from the time of Jesus and allows visitors to experience life from that era.

“Right now we probably have over 100 Amish, Beachy Amish or Anibaptist types working on the project,” Troyer said. “Without their skills and help we would not be close to opening up. And they sense there is a purpose behind it and that makes a difference. You are building a facility that is part of their spiritual life.”

The ark framing is made mostly from dead, standing Englemann spruce trees from Colorado, according to Troyer. The boat is sheathed in pine.

While his company has designed other timber-framed buildings, “This is the largest single and certainly the most diverse because everything is custom designed,” Troyer said.

That meant that during construction a lot of workers with skills in timber-framed building techniques were needed. Most of those were found in the Anabaptist communities in Pennsylvania, Ohio, Kentucky, Illinois and Indiana.

“A year ago in June we set the first timbers,” he said. The largest timbers are about 36 inches in diameter and 50 feet tall.”

There are 64 timbers in the ark that are 50 feet long, according to Troyer, and more that are smaller.

Some of those timbers were worked at David and Rudy Bontrager’s sawmill shop along C.R. 37 east of Benton.

“The people in the northern Indiana community were engaged in this,” Troyer said. “I reached out to a number of people we knew.”

Among those people were the Bontragers and Orie and Earnest Lehman. Troyer estimated that about 100 people in northern Indiana worked on the ark in some manner.

Rudy was busy Thursday at his sawmill, cutting a large log for an order of wood. As an old yellow Minneapolis Moline tractor powered the mill in the background, he said his family operation cut the notches in the large spruce logs so they could be fitted together once they got to Kentucky.

“We don’t have a lot of that around here,” he said of the Englemann spruce. “It was nice wood to work with.”

The sawmill crew used chainsaws to cut the notches and did some trimming up with the large sawmill blade.

Rudy showed two of the extra uncut large logs that were still on site and waiting to be picked up. The tag on the end said it was to be cut 16-by-24 inches and left 50 feet long.

The ark project impresses Rudy because of its size and scope and its ties to the Book of Genesis.

“It is kind of interesting,” he said. “To compare with what Noah would have done... It’s all based on God’s guiding.”

Some steel plating being used in the ark was fabricated by and Jomar Machining & Fabricating along C.R. 22 in Middlebury, according to Troyer.

How did Noah do it?

The workers who constructed the ark used modern tools, heavy equipment and engineering techniques. Asked how Noah could have built a similar structure in his time, Troyer simply said, “We don’t know. According to the Bible it took about 100 years, but as far as tools, we don’t know.”

He said many scholars have speculated how such a watercraft could be built by Noah and his three sons.

“One scholar’s account is that people who lived longer then had accumulated so much more knowledge,” Troyer said.

According to Genesis Noah used pine pitch to caulk his ark's seems and make it watertight. But the modern ark won’t float.

When asked if the boat would float should another flood occur, Troyer chuckled. “There are too many holes in the backside of the arc,” he said.

And, he reminded that the Genesis account of the flood cites God as saying he would never inundate the earth again.

Troyer said Ark Encounter has a 4,000-space parking lot with the expectations it will become a major tourist attraction.

“It won’t be as big an attraction as Disney World,” he said, “but it will be the largest religious themed attraction in the country, if not the world.”

And he added, “When when you come and see it, people are just awestruck by it.”