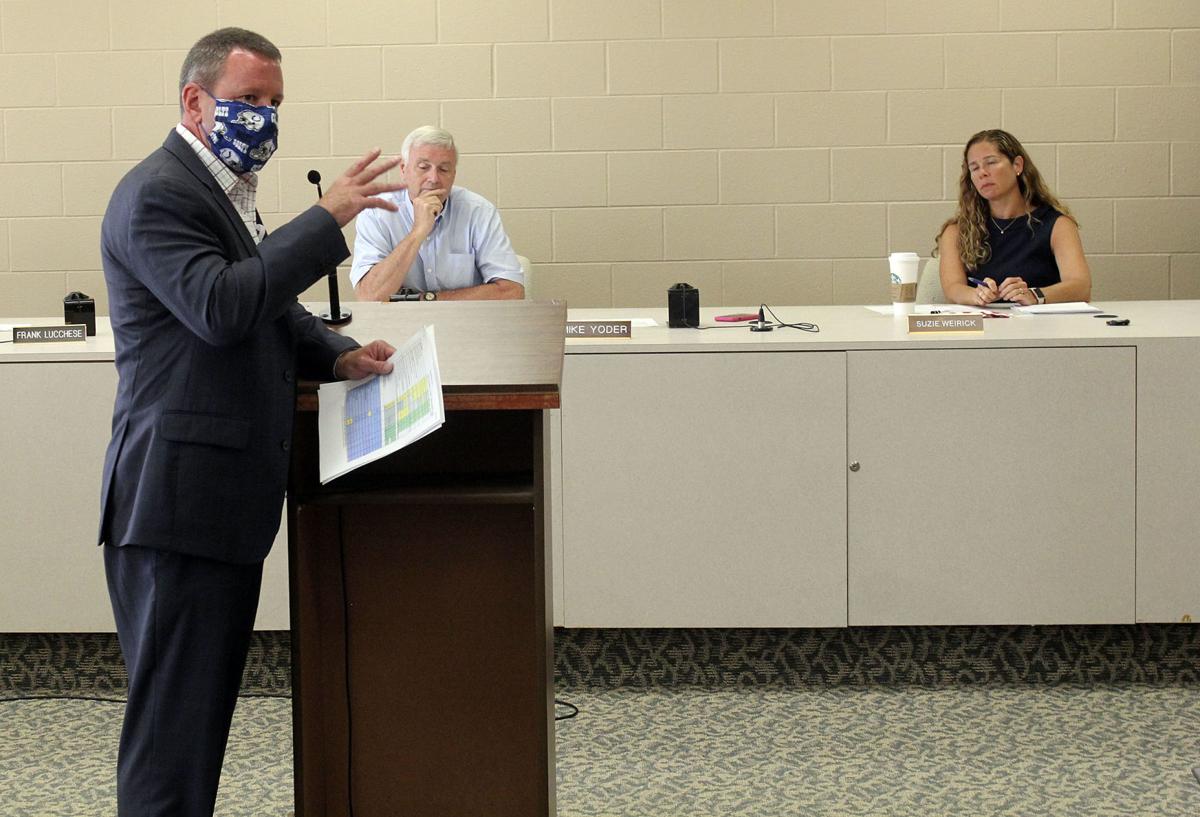 GOSHEN — While many residents of Elkhart County have used social media outlets to question the issuance of an order mandating the wearing of masks throughout the county, local and state health experts recommended the move.

Comments made by state, and local health officials and mayors supporting the health order issued Monday in an attempt to slow the rate of COVID-19 infections, were plentiful. The comments were made before Health Officer Dr. Lydia Mertz announced her order to the Elkhart County commissioners Monday morning.

“You guys have a lot of infection compared to the rest of the state,” Indiana’s Health Commissioner Kristina Box told the commissioners.

Box traveled to Elkhart County Monday to not only talk to the commissioners and support the mask order, but to also to talk to members of the COVID-19 minority task forces for Blacks and Hispanics and a third group representing the Amish community.

She also told commissioners she is not in favor of the county moving to Stage 5 of the state’s reopening plan.

“I will own this. I do not think you should go to Stage 5,” she said. “I don’t think that is appropriate. I support what Dr. Mertz has done today with the mask mandate.”

To get to Stage 5, the goal is to get the positivity rate to 5% or below, Box indicated. The “positivity rate” is the rate of infection for those who have been tested for the virus. On Monday, when the meeting took place, the county’s rate was 14.07%. The state’s positivity rate for testing Monday was 4.99%. The long-term state positivity rate is 9.5% when total testing and positive tests dating back to May 5 are used to figure the percentage.

Stage 5 is scheduled to begin Saturday.

Mertz said the mask order followed an effort to educate county residents about how to control the spread of COVID-19.

“We have spent some weeks now putting out education about how important masks are, and all the other things, the social distancing, the hand washing, staying home when you are sick, all of those things that have to continue to be done,” Mertz said. “We need public compliance with everything, including masks.”

Mertz did not commit to any future date for lifting her order, explaining she will be looking at several areas of concern.

“I would like it to stay in place … until we can see a sustained drop and a rate of positivity. And until I know the hospitals have the capacity they need to if we have a surge. Until I feel like the public is comfortable wearing masks and social distancing and doing things differently than before we had COVID. So, there are a number of factors that need to go into this.”

“I am a firm believer in the research and studies I have seen on masks,” said Goshen Hospital CEO Randy Christophel. “If we are going to turn the corner, we have to do this. The whole game right now is turning the corner. We have to turn the peak and go the other direction.”

Elkhart General’s administrator said he is also in favor of the mask ordinance because he sees a need to slow the spread of the virus.

“Really in the last week we have been seeing an increase,” said Carl Risk II, Elkhart General’s CEO. “We had been running on a daily basis for positive cases in the hospital of around 15, get to 18 or so, and that bounced around kind of up and down. Last week we dipped into the 20s and quickly got up to as high as 30 positive patients in the hospital. That certainly created pressure on the hospital.”

Risk said the hospital has beds available, but there the increase in patients has led to a shortage of critical care nurses.

“Where we run into trouble is the really sick patients need critical care nurses and intensivists. So that became the pressure point for us,” Risk said.

The ISDH sent five ventilators to the hospital last week in case they are needed, he said, but so far, they have not been used. Over the weekend the COVID-19 patient count dropped to 26 with six of those on ventilators.

“That’s the ebb and flow that happens every day,” Risk said. “We are looking on this almost on an hourly basis of kind of where we are.”

Risk told Box, “I am here to say I love that you said we shouldn’t go to Stage 5. I don’t think we should either, as a hospital administrator. I think we should push the pause button on that.”

“I think it is important,” said Goshen Mayor Jeremy Stutsman. “We have been struggling this whole time with balancing out our health and our economy. Some people think health needs to come first, which I lean toward that side. But if our economy is down, we have a whole other slew of issues — people can’t purchase their food, pay for their rent, pay for their doctor’s appointments.

“I think that staying at Stage 4 would be smart. I don’t want to see us get to a point where we have to back up and slow down our economy even more. So, I think the mask order is a good step to try and get ahead of this before we have to step back on our economy.”

The city of Elkhart is accounting for a large percentage of positive cases of COVID-19, according to Mayor Rob Roberson.

“Elkhart makes up almost 50% of the positive cases,” Roberson told the commissioners. “And we are about 25% of the county’s population. So, within Elkhart, especially in the ZIP codes that deliver the most positive cases, we are about a third Latino, a third African American and third white. It is critical that we dive down on the issues we already started to. And since we live in such dense urban areas in certain ZIP codes, it is so important for face coverings to be a part of it.”

He also said Elkhart will be increasing education about other preventive steps that can be taken to lessen the spread of the virus.

He said business owners have called him to support a mandatory mask order.

“We are fully supportive of educating the community on the value and hopefully we can get our numbers down to an acceptable level and continue to move this county forward.”