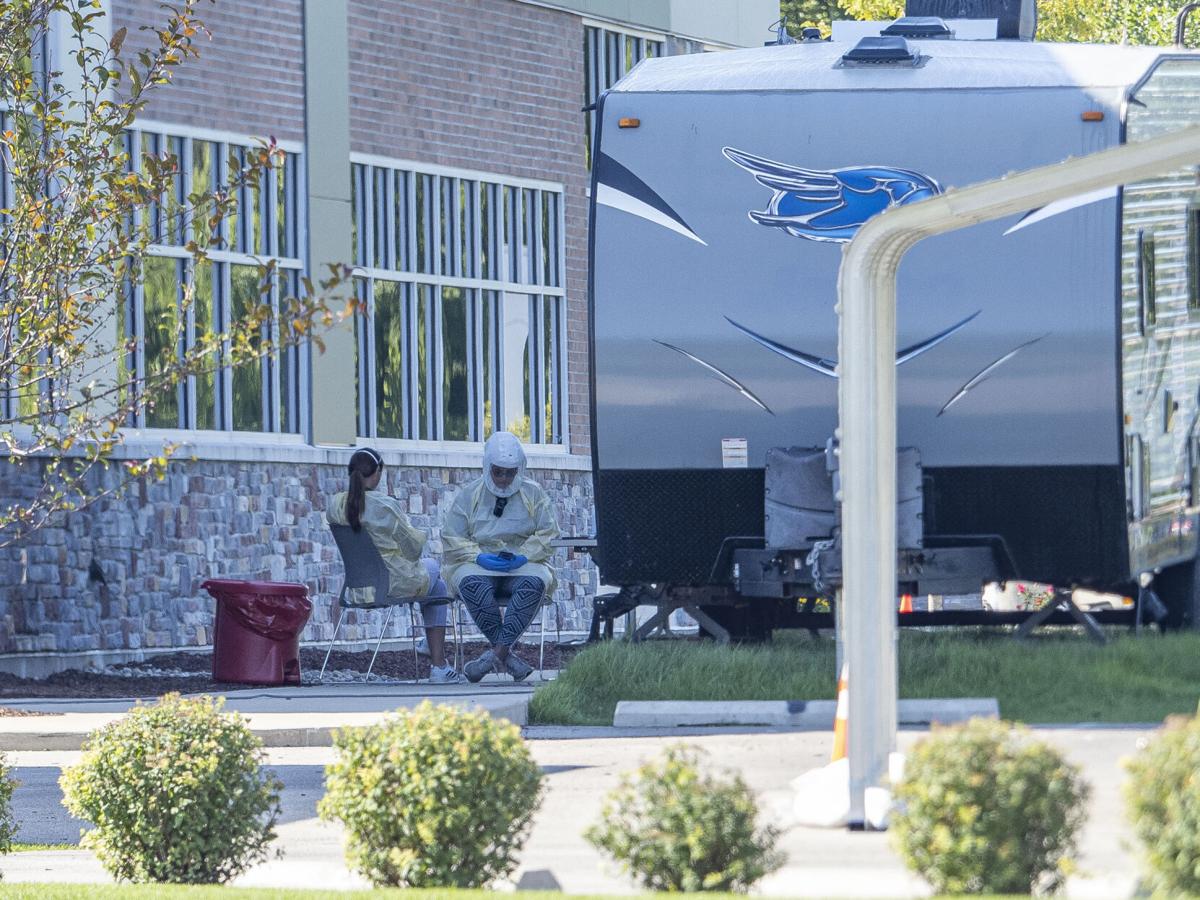 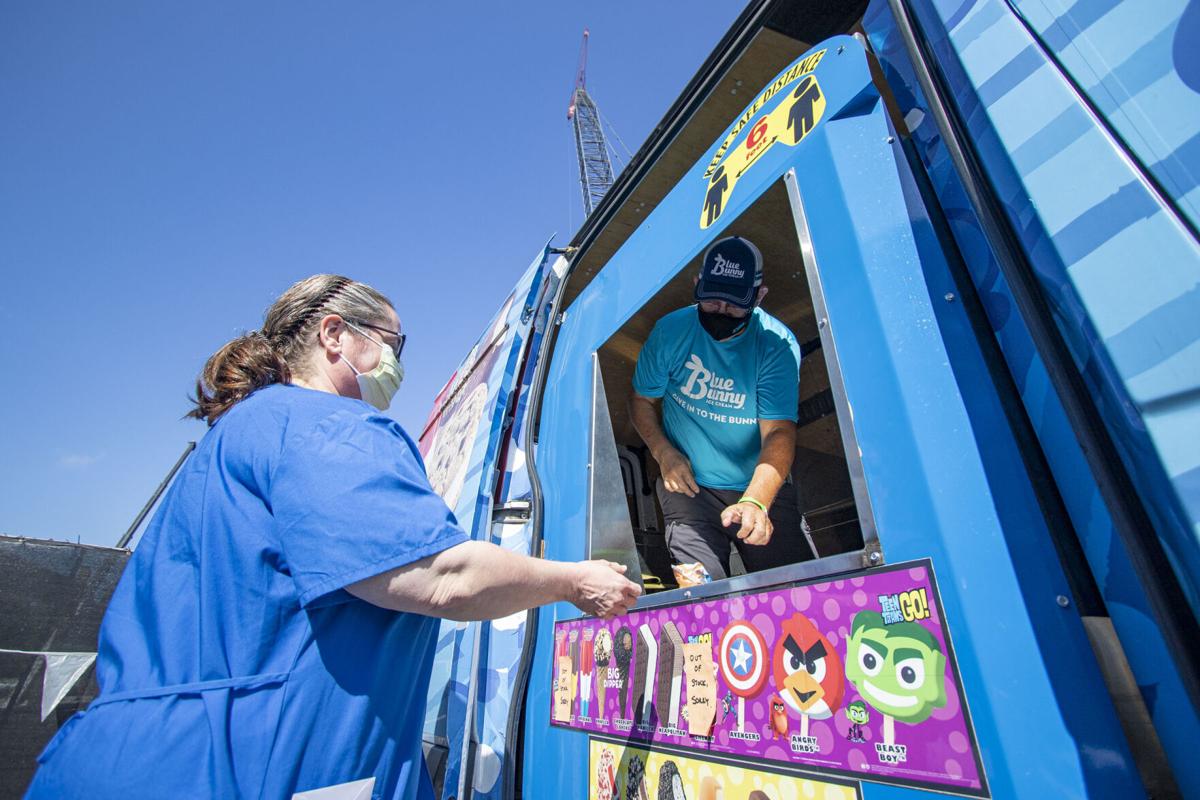 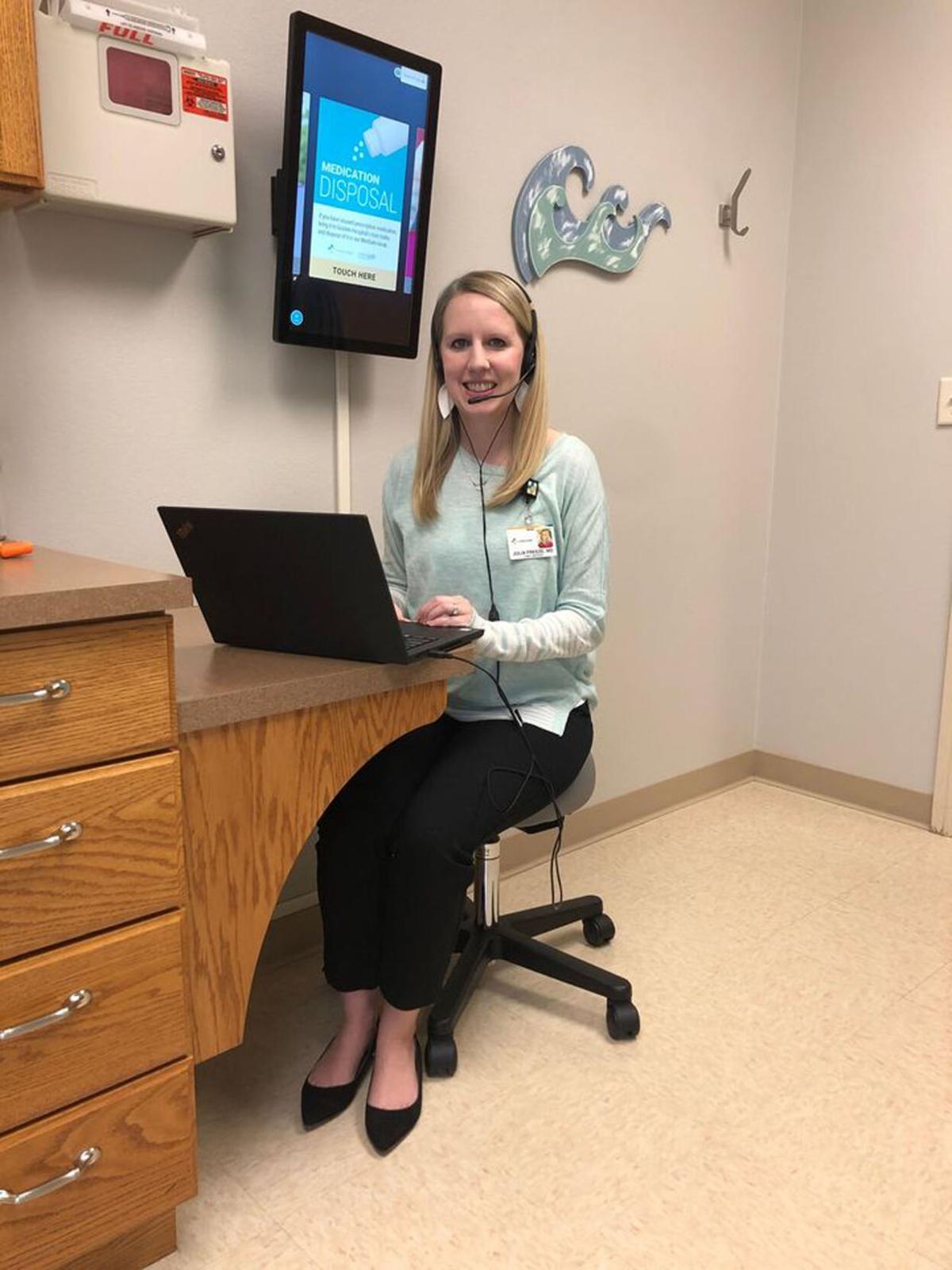 Family Medicine Physician Julia Freeze prepares for a virtual visit. The first virtual visit for the health system was March 23. 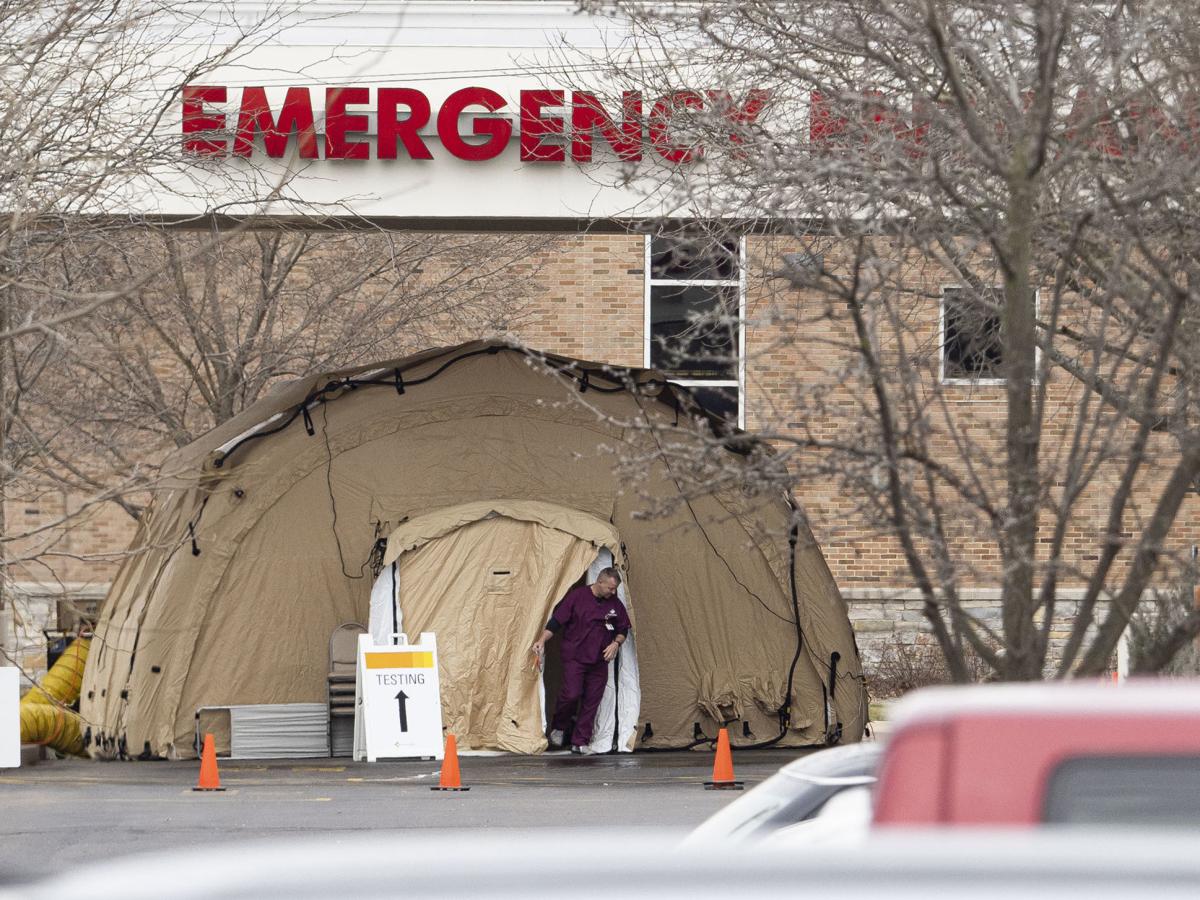 A Goshen Health employee exits a tent set up under the emergency room canopy at Goshen Health Hospital in this March 17 file photo. 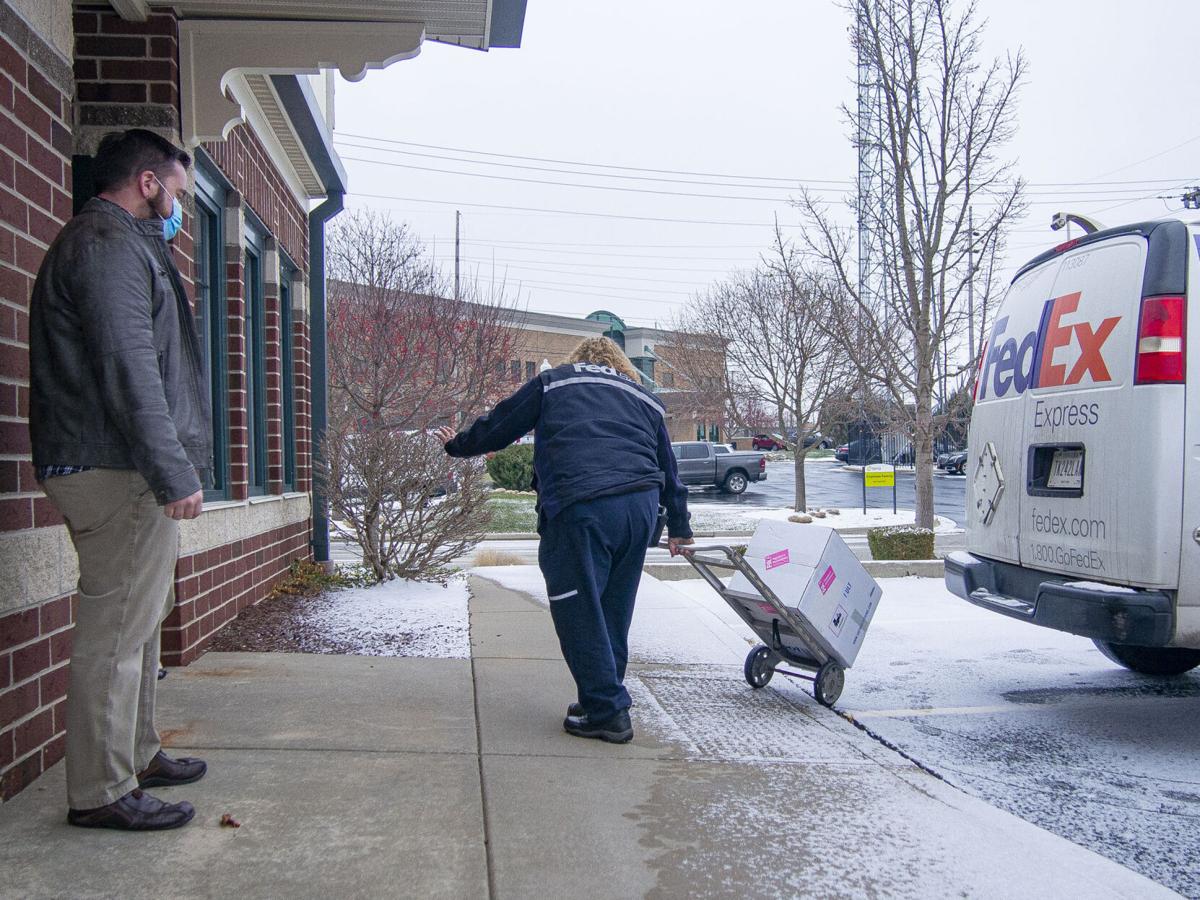 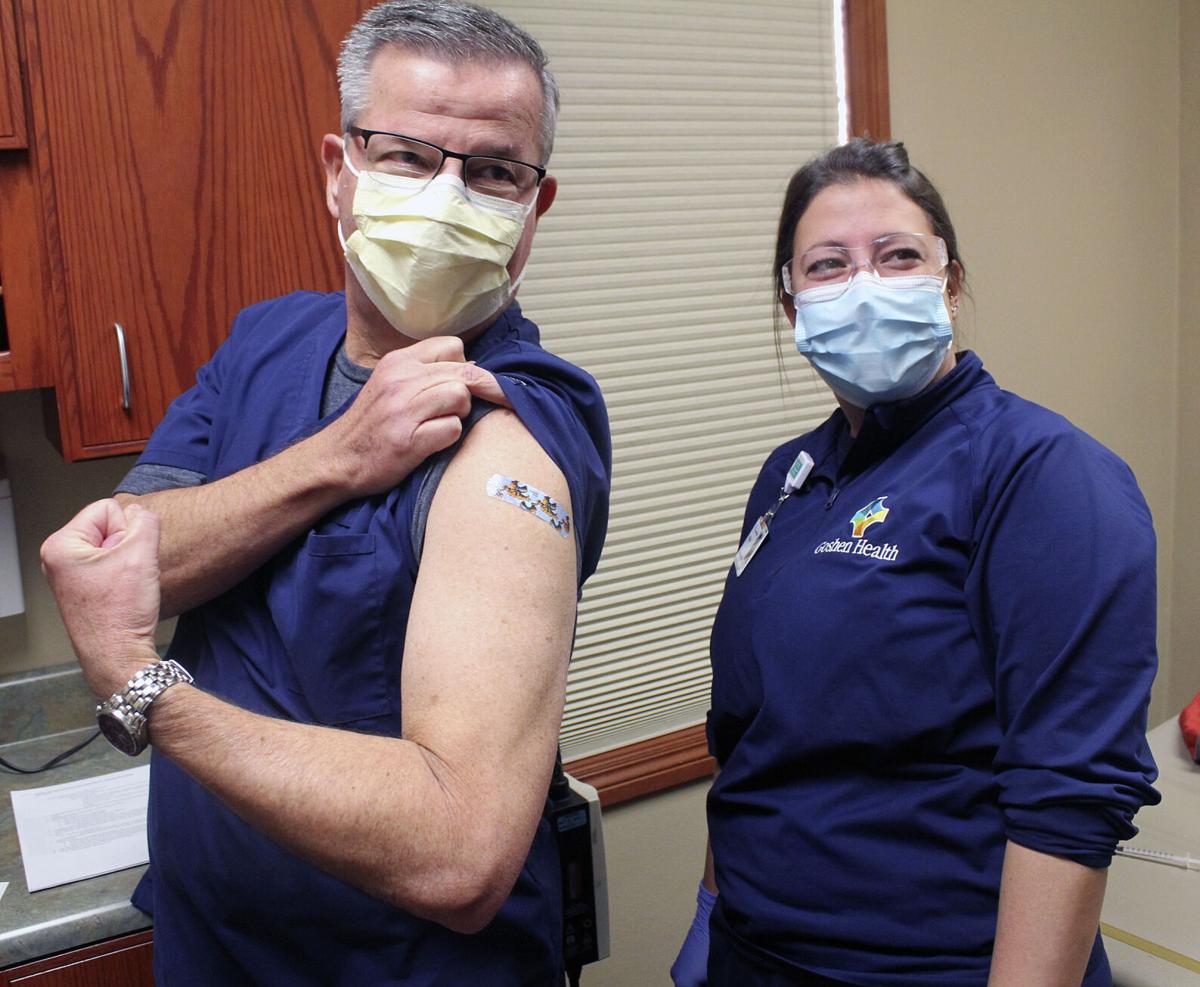 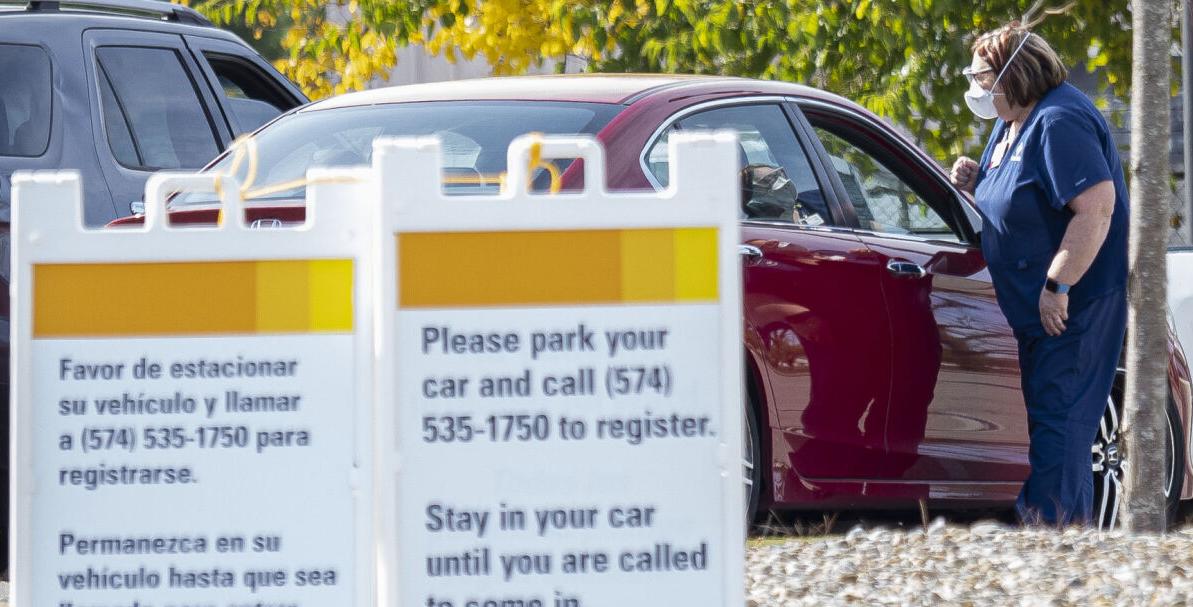 A Goshen Health worker communicates with a patient Oct. 20 in the parking lot of Goshen Physicians Family Medicine and Urgent Care in Goshen. 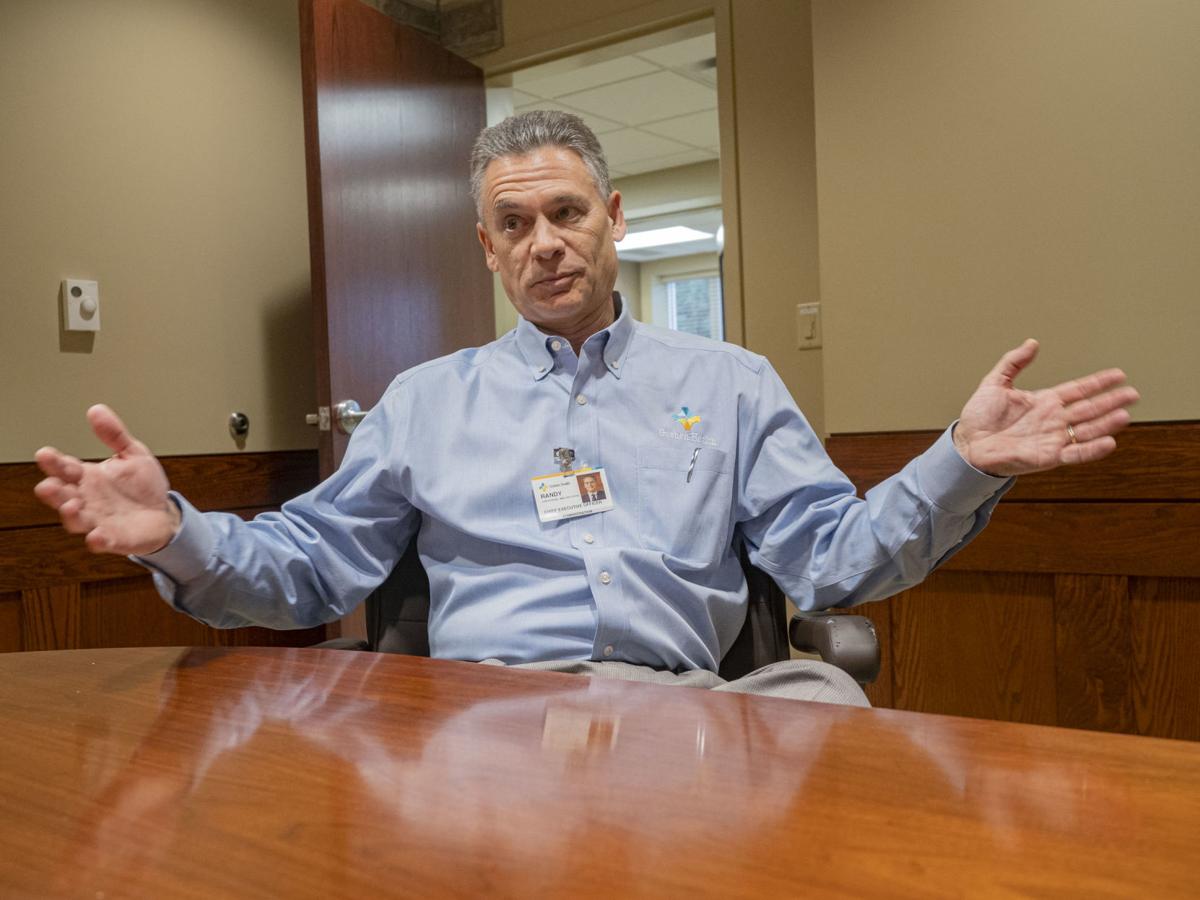 Goshen Hospital CEO Randal Christophel speaks to the press in this October 2019 file photo about the upcoming plans for the remodeling of Goshen Hospital. 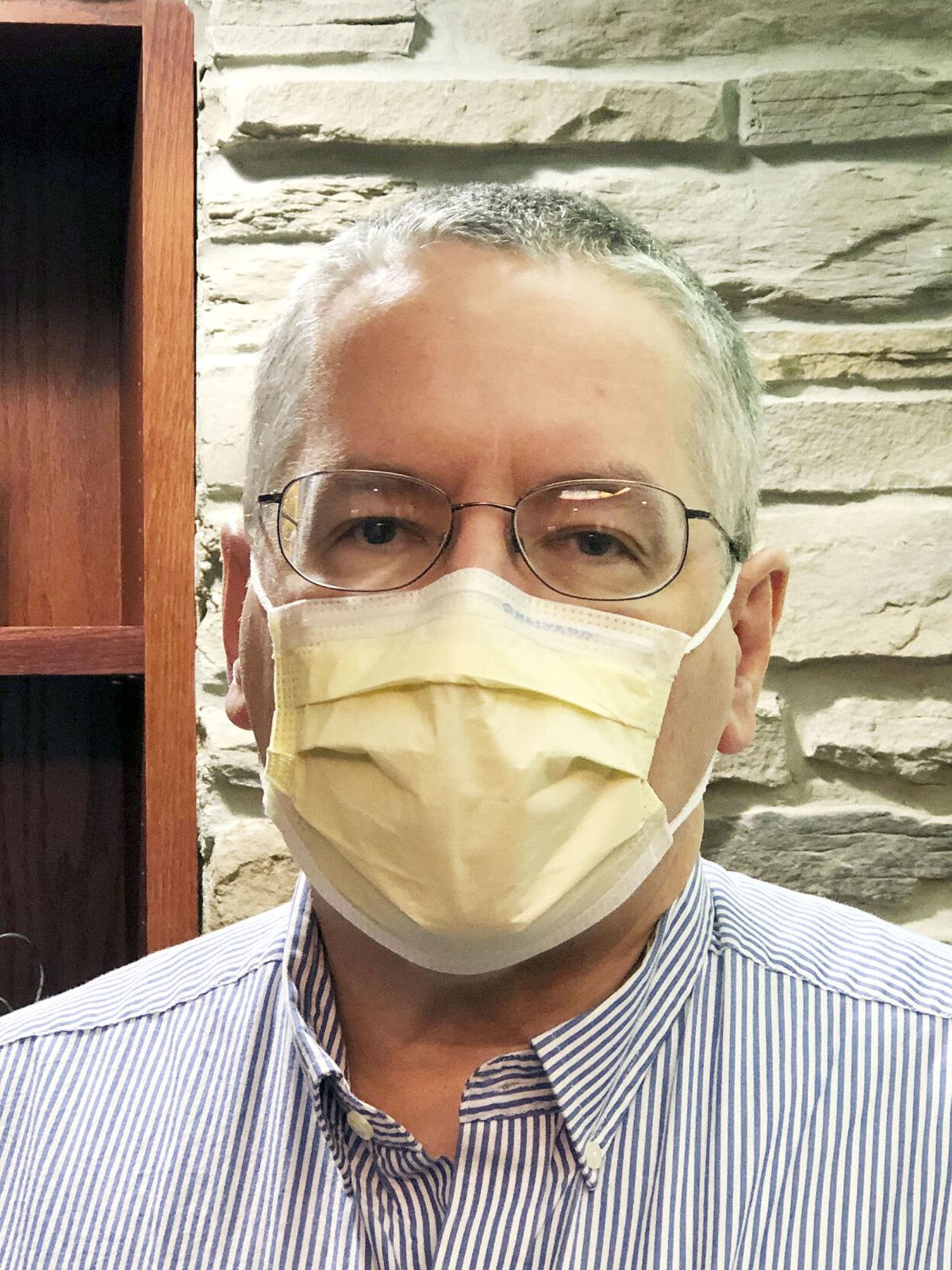 Family Medicine Physician Julia Freeze prepares for a virtual visit. The first virtual visit for the health system was March 23.

A Goshen Health employee exits a tent set up under the emergency room canopy at Goshen Health Hospital in this March 17 file photo.

A Goshen Health worker communicates with a patient Oct. 20 in the parking lot of Goshen Physicians Family Medicine and Urgent Care in Goshen.

Goshen Hospital CEO Randal Christophel speaks to the press in this October 2019 file photo about the upcoming plans for the remodeling of Goshen Hospital.

GOSHEN — Almost a year after the COVID-19 pandemic arrived on U.S. shores, a lot has been learned not only about the virus but the health care involved, the toll on the public psyche and the effect of a politicized virus.

Leading the defense of local health at Goshen Hospital have been Dr. Daniel Nafziger, chief medical officer and infectious disease specialist, and Randy Christophel, president and CEO of Goshen Health.

At the beginning of the pandemic, the lack of information and the spotty information was a challenge, Christophel said.

Italy and Spain were being overrun by the virus and the countries had large death counts.

At that point, Goshen had zero COVID patients.

According to Christophel, the prediction models were built on large cities — places with mass transit, dense population centers, subways and elevators in tall buildings.

“None of those things apply to us here,” he said. Indianapolis, perhaps, but not rural or smaller cities in Indiana such as Goshen.

“How we adapt and deal with the prediction models was kind of the biggest challenge through the first half of (2020). It probably took us until June to decide to stop paying so much attention to the models because this is going to evolve in waves,” he said. “Even the pandemic has been wavy. So that’s been the other interesting learning experience. It kind of comes and then it goes and backs off. We’re in the — depending on how you’re counting the waves — we’re in the third wave now or the end of the second wave.”

So the question became, how would they prepare for a wavy pandemic with a lack of information because the prediction models were not helpful. Some of those predictive models said Goshen would need three times more in-patient bed capacity than they had.

“We went through a planning model, a surge preparation process, to triple our capacity,” Christophel said. “We actually created a model that doubled our capacity. We were going to stash patients everywhere. The ORs would have been shut down, so we would have had four patients to a room in the operating rooms, or the post-surgical recovery room would have been an inpatient ward. We moved the cancer center chemotherapy/infusion area out of the building so we could line up patients in there just waiting to be overwhelmed, because that’s what the model said.

“Thankfully, that never happened. Because you think about stretching to those volumes, we don’t have staff sitting around doing nothing waiting for our capacity to double.” And what if that staff fell ill as well, which they eventually did.

According to Nafziger, 149 were out at one time because of the virus.

“All of these things were going on and you just can’t plan for that many variables,” Christophel said. “You do your best and you make your best plans and best bets, but those were the challenges as we were coming into the beginning of the pandemic.”

Nafziger said that in many ways the pandemic has played out like he expected it to.

Because COVID was new, like lots of other new disease, initial estimates of metrics such as mortality rate or how sick people will get tend to be high, he said, explaining that is because the really sick people are the ones who are coming in to receive medical attention. But that’s understood in the medical community.

“In the case of this virus, the best data we have today suggests that maybe 40% to 45% of people are asymptomatic,” he said.

But back in February, the medical world didn’t know that the infection rate number was that high.

“That’s a good thing insofar as a lot more people who’ve gotten infected have not gotten sick,” he said. The initial mortality rate was estimated at 1½% or 2% of everybody who got infected. “Those numbers were too high, and the real number is probably closer to a half of a percent. So that’s been a good thing.”

But what has been staggering for him to hear during the course of this pandemic is people saying things like, “We shouldn’t worry about this because it’s only killing .3 of a percent of people. … You look at that .3 of a percent of people and that’s hundreds of thousands of Americans, or it may turn out to be more than a million Americans, depending on how quickly the vaccine rolls out and how well people behave until most of the population has been vaccinated. I can’t really wrap my brain around 300,000 or 400,000 people dying of a new infection in a single year in the United States. I sort of have an idea of what 30,000 people living in Goshen is, but it’s really hard to imagine what … 10 times that number, it’s just hard to wrap one’s brain around.”

Until the majority of people are vaccinated, the doctor said it’s critical that people stay on their best behavior.

Since the virus arrived in Elkhart County in late March, health officials have discovered that wearing masks, physical distancing, having good hand hygiene and staying home while sick work at slowing down the virus transmission, he said.

Numbers peaked at Thanksgiving and non-critical surgeries were placed on hold. Goshen Hospital and Elkhart General Hospital diverted ambulances. But the numbers have been going down since. Nafziger pointed out that those numbers could just as easily go back up if people don’t take precautions.

“We are not going to have enough vaccine that we can protect people with between now and spring break,” Nafziger said. “People are still going to need to do all those things that we’ve been saying all along if we’re going to protect our community.”

This past year, as Goshen Hospital workers were stretched thin due to rising numbers of patients, they felt and appreciated the community support.

“We were just incredibly grateful for what the community did for us,” Christophel said. Companies and people donated masks and other supplies. “And so we never ran out.”

Health workers were also appreciative of kids drawing pictures for them, or drawing chalk messages on the sidewalks around the hospital. People supplied meals to health care workers, gave gifts, recorded videos and prayed.

“All of those things in a very stressful, intense time were important things to us and to our colleagues,” Christophel said. “It really helped us get through.”

Staff members were not only concerned for their patients, but were facing the extra stress of people not believing that the pandemic was real or as bad as the medical community was letting on. Politics entered the medical realm.

Not believing medical staff about the pandemic, he said, “was a drag and a drain on morale. We’re doing everything possible to support our community and help people in their highest times of need, and certain aspects of our community wasn’t doing the same.”

He finds it odd that people would believe what they read on the internet. “They would say it was their constitutional right not to wear a mask. Does it not also link to ‘it’s my constitutional right to do harm to other people because I’m not wearing a mask?’ So I have a problem with anyone of that opinion of ‘I get to do what I want because it’s a free country.’ You don’t get to do things that harm other people.”

The politics involved with this pandemic has also been really disappointing to Nafziger.

“I have people I know and care about who’ve received death threats related to encouraging people to wear masks. And that’s it’s really disappointing because it is a symptom of this being politicized in a way that’s not helpful,” he said. “We don’t see 40 or 50 people on the courthouse lawn protesting indoor toilets. We don’t see people protesting clean water. To me, these things are basic public health measures. They are not political statements.”

He said he doesn’t know how to undo this type of politicization, “but hopefully consistent messaging and looking at science, not at one’s Facebook feed, could help with that.”

Nafziger does not want to get away from the main focus — patients.

It’s easy to shift the focus to health care workers, he said. It was an emotionally hard year for them. Nafziger said there were 70 more deaths in the hospital than what they would have had in a normal year.

Health care workers care about all of their patients, he said, so to watch people die almost daily is heartbreaking for them.

But that’s not the problem, Nafziger pointed out.

“The problem is we have people getting sick and dying of a preventable illness,” he said.

“We’ve not seen any indication this virus will stop spreading,” Nafziger said. “Whether it’s this year, next year or five years from now, we could pretty much count on people who live in Elkhart County, people who live in the United States are going to get infected with this virus if they don’t get vaccinated.”