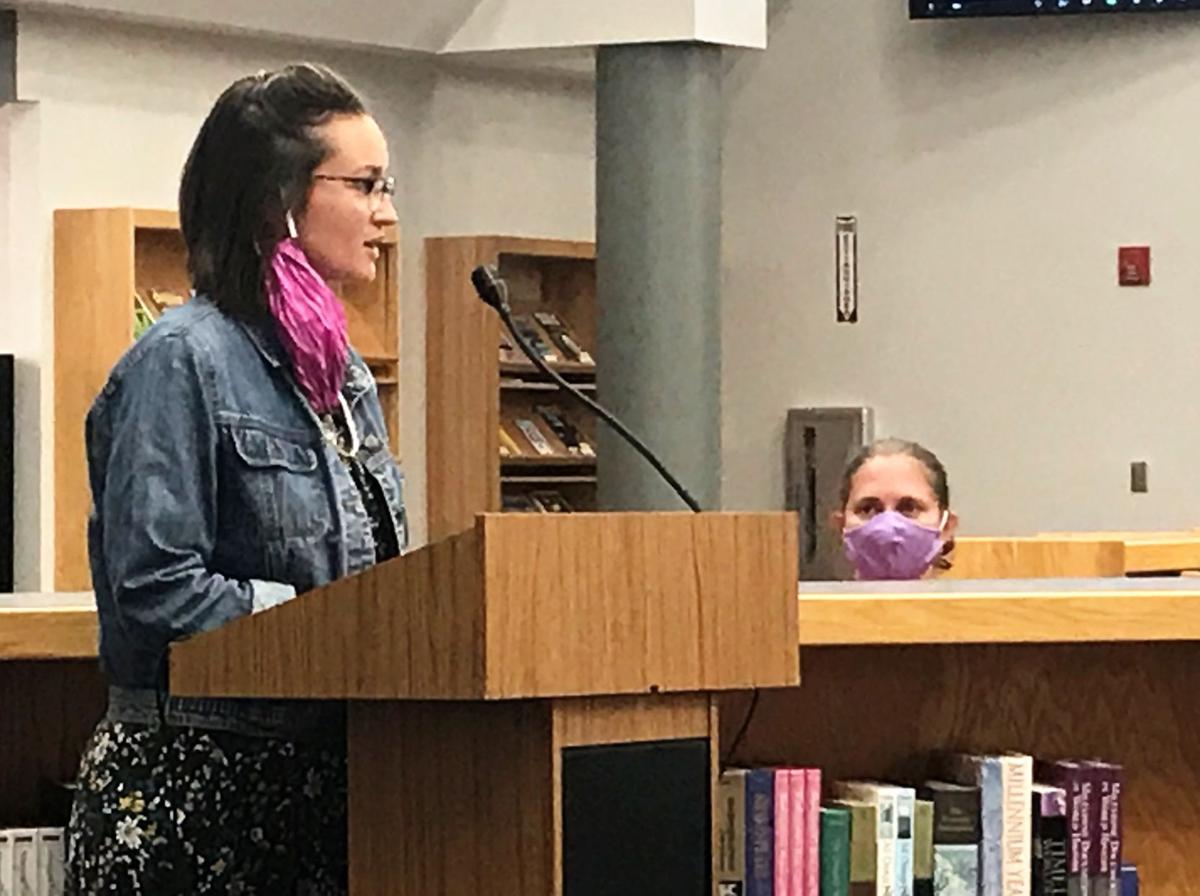 Lavonne Shetler, a Goshen resident and English teacher at Goshen High School, left, calls on members of the Goshen school board to support corporation-wide anti-racism training during a meeting of the school board Monday evening. 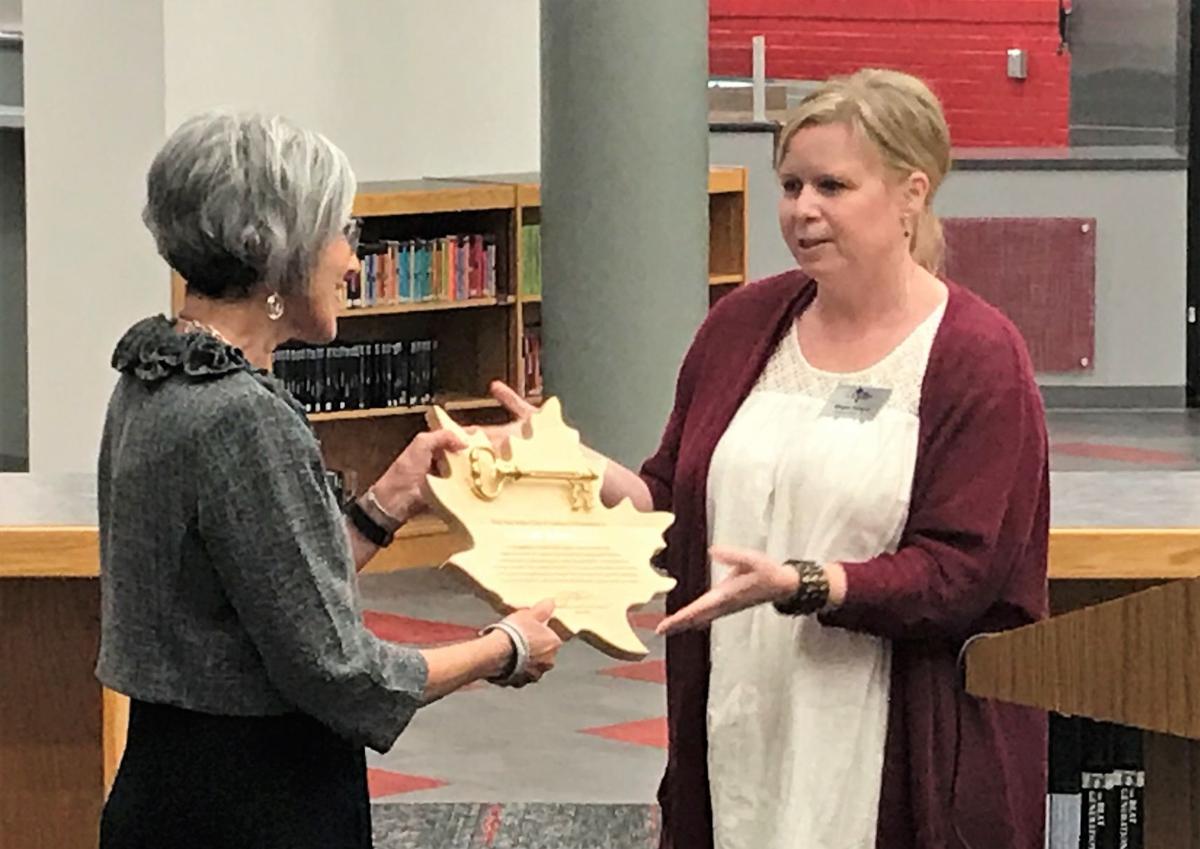 Goshen Community Schools Superintendent Diane Woodworth, who is set to retire June 30, left, receives a ceremonial Key to the City from Goshen City Council member Megan Eichorn, D-District 4, on behalf of Goshen Mayor Jeremy Stutsman during a meeting of the Goshen school board Monday evening.

Lavonne Shetler, a Goshen resident and English teacher at Goshen High School, left, calls on members of the Goshen school board to support corporation-wide anti-racism training during a meeting of the school board Monday evening.

Goshen Community Schools Superintendent Diane Woodworth, who is set to retire June 30, left, receives a ceremonial Key to the City from Goshen City Council member Megan Eichorn, D-District 4, on behalf of Goshen Mayor Jeremy Stutsman during a meeting of the Goshen school board Monday evening.

GOSHEN — Goshen Community Schools officials Monday issued an anti-racism statement in response to the killing of George Floyd, a 46-year-old black man who died May 25 after pleading for air while a white Minneapolis police officer pressed his knee into Floyd’s neck.

But while thankful for the vocal commitment to anti-racism, some within the school corporation feel the statement does not go far enough to address the issues of racism and inequality within GCS and the greater Goshen community.

Distributed via email at around 5 p.m. Monday, the statement begins with a strongly-worded commitment by the school corporation to stand against racism whenever and wherever it is encountered.

“The current demonstrations in response to the death of George Floyd and the violence that has followed are expressions of shared frustrations felt after years of injustice, inequality and racism,” the statement reads. “Goshen Community Schools will always stand against and speak out against racism, and we stand against racism today by saying black lives matter. Silence only contributes to the problem.”

The statement goes on to note that the school corporation’s mission, “Inspiring Innovation … Empowering Potential … Enriching our World,” means that GCS supports all of its students and strives to make the world a better place for everyone.

“Goshen Community Schools recognizes the inequities that exist in our society and our country. We strive to make a difference in these inequities by supporting every student and creating a safe place for all students to learn and succeed,” the statement reads. “The people of Goshen Community Schools are committed to making a difference in this world. It is who we are. We know that it is our responsibility as educators to be part of both the short-term and long-term solutions.

“The perpetual acts of inequality and discrimination manifest as more than the acts themselves, taking a significant toll on the mental health and well-being of those impacted and our community,” the statement continues. “This stance of equity and anti-racism is embodied in the work of the Goshen Community Schools teaching staff every day.”

The statement concludes by noting that the school corporation’s most critical goal is ensuring the safety and security of its students and the environment in which they learn and exchange ideas, which includes maintaining a strong relationship with local law enforcement.

“Every student in every classroom is part of a diverse and culturally sensitive community, where differences are acknowledged, valued and celebrated,” the statement reads. “We acknowledge that one of our greatest community partnerships is with the Goshen Police Department. We know and trust that all community leaders will stand with us in supporting and protecting everyone in the Goshen community.”

WHERE IS THE ACTION?

Not all who work under the umbrella of Goshen Community Schools feel the statement goes far enough, however.

Among them is Lavonne Shetler, a Goshen resident and English teacher at Goshen High School who spoke on the topic during a meeting of the Goshen school board Monday evening.

“This afternoon, Goshen Community Schools released a statement condemning racism and saying black lives matter. I’m thankful that GCS has made this vocal commitment to our students and our community,” Shetler said in beginning her statement. “I’m glad that our school leaders recognize the inequities in our society, and I’m relieved to hear that GCS is committed to both the short-term and the long-term solutions.”

However, Shetler said she doesn’t feel the words expressed in the statement go far enough to adequately address the issue, and instead called on the school board to support further action on the matter, such as mandatory anti-racism training.

“Goshen Community Schools administration, faculty and staff are all much whiter than our student body and the community we serve. Our status as educators, and the impact we have on our students, should not be taken lightly. What our students learn from us goes beyond the explicit curriculum,” Shetler said. “The first step to building a better future is to make sure we each are aware of our own biases, our own internalized racism, and our own shortcomings in addressing them.

“In my six years teaching here, I cannot remember ever participating in anti-racist training,” Shetler added. “To allow another school year to pass by without actively educating ourselves on the systemic inequalities of American schools, and how we, regardless of our intent, are perpetuating this system, is a disservice to our students, and a dishonoring of education as it should be.”

Shetler said she feels anti-racism training must become a regular part of the continuing education and professional development of all teachers, staff and administrators at GCS.

“As we learn more, we will be better able to cultivate a school culture in which students will be able to participate in open and honest conversations about race and racism, students of color will be able to see themselves both in our curriculum and our teaching staff, and students of color will not be affected by disproportionately high dropout rates or disciplinary actions,” Shetler said. “The work must begin with us.

“The statement that was made this afternoon focuses on what GCS recognizes and believes, but where is the action?” Shetler added. “I hope that from here, GCS will incorporate tools and learning that bring justice into our schools, and encourages all of us to identify the ways in which we can be better, and do better.”

Along those lines, Shetler said a good starting place would be to require that all GCS faculty and staff participate in ongoing anti-racism training provided by a reputable, outside organization.

“We need all teachers, all staffing, and all administrators to actively engage in the work of becoming anti-racist, and this cannot be accomplished in a one-day session. It will not be enough to send a handful of teachers to anti-racism training, nor should we assume that we can lead this learning ourselves,” she said. “I ask that you support this growth toward not just a more inclusive school, but toward an anti-racist community where all of our students will feel safe, all of our students will be respected, and all can receive an education that is equitable and just.”

In other action, board members: