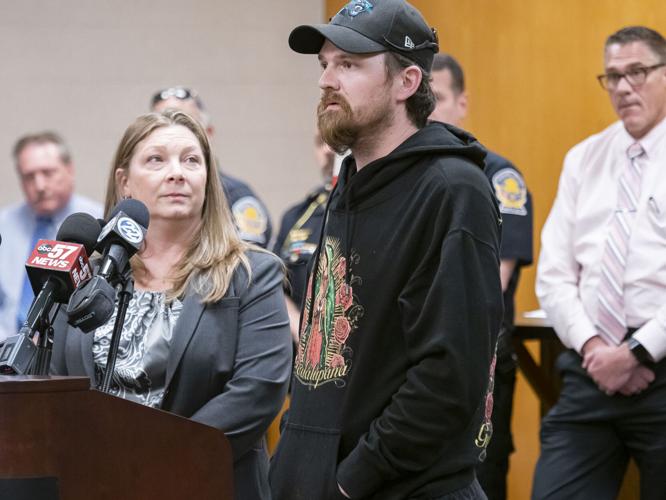 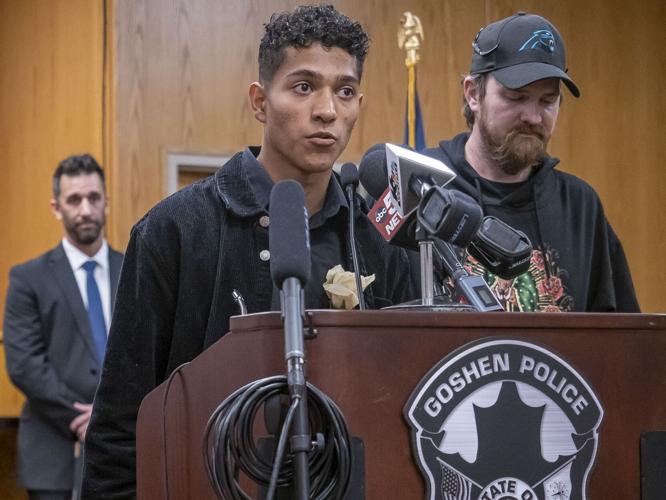 Goshen City Council Youth Adviser Adrian Mora, center, speaks on how the community can support the family during a press conference at the city’s Council Chambers located at 111 E. Jefferson St. in Goshen, Monday, May 23. 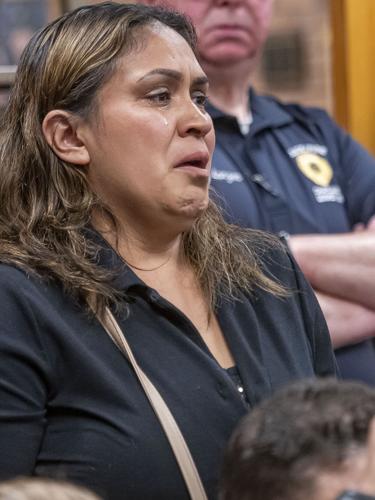 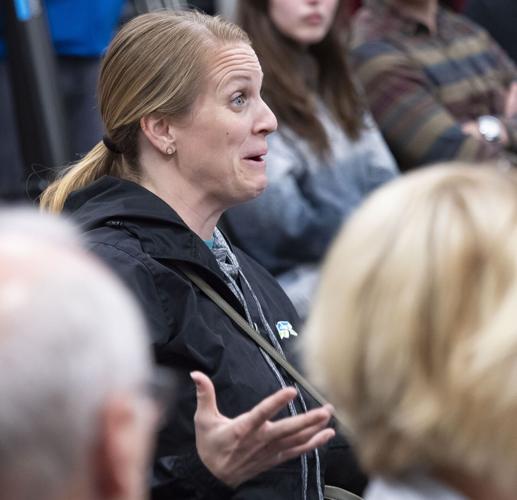 The Post Executive Director Stef Tropf speaks during a press conference at the city’s Council Chambers located at 111 E. Jefferson St. in Goshen, Monday, May 23. 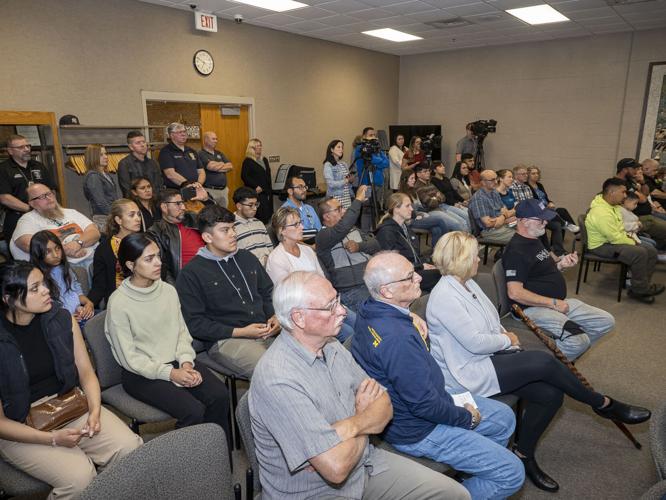 A large turnout from the community attended a press conference at the city’s Council Chambers located at 111 E. Jefferson St. in Goshen, Monday, May 23. 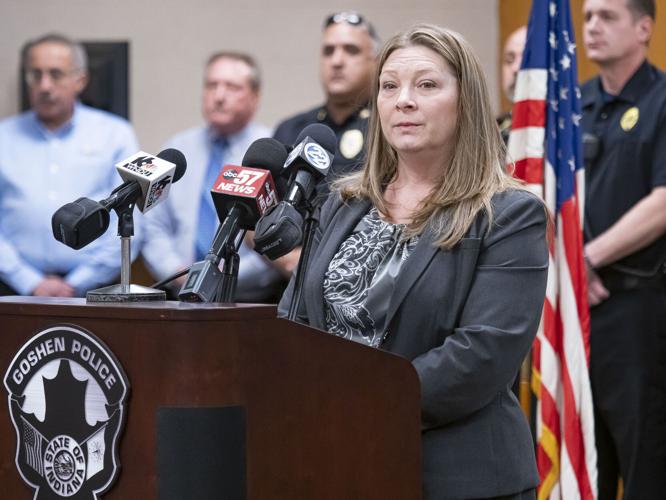 Goshen City Council Youth Adviser Adrian Mora, center, speaks on how the community can support the family during a press conference at the city’s Council Chambers located at 111 E. Jefferson St. in Goshen, Monday, May 23.

The Post Executive Director Stef Tropf speaks during a press conference at the city’s Council Chambers located at 111 E. Jefferson St. in Goshen, Monday, May 23.

A large turnout from the community attended a press conference at the city’s Council Chambers located at 111 E. Jefferson St. in Goshen, Monday, May 23.

GOSHEN — The names of two males who died as a result of Saturday’s mass shooting on Rosemare Court were released Monday during a press conference held at the Goshen Police & Courts Building in downtown Goshen.

The press conference, which was held at 6:30 p.m., featured comments by Goshen Mayor Jeremy Stutsman, Goshen Police Chief Jose’ Miller, Elkhart County Prosecutor Vicki Becker and others in an effort to update the community on Saturday’s shooting incident and subsequent investigation.

Identified were the alleged shooter, David Varela Morales, 20, and one of the four victims, Richard Rios, both of whom have been confirmed deceased. The names and ages of the other three victims who were shot — all siblings of Rios — are being withheld out of respect for the family and the ongoing investigation, Becker stated.

No conditions for the three injured siblings were provided Monday, other than a brief comment from their stepfather, Sean Pounds, who said they are “well — as well as can be at this point in time.”

“The news of this horrific shooting that has devastated families and our community has hit us all hard,” Mayor Stutsman said in beginning the press conference. “It is important that we gather together to talk about these incidents so that we can begin that healing process for our community and for the families.

“Our hearts and prayers are with the Arellano Rios family,” he added. “We are all praying for the full recovery of those family members that are still in the hospital, and we mourn the loss of their son.”

“Shortly after 3:20 p.m. on Saturday, May 21, the Public Safety Communication Center, which is the emergency 911 center, received an emergency call indicating that a shooting was taking place on Rosemare (Court) here in Goshen,” Becker said. “Now, keep in mind, the first thing that happens is police, fire and ambulance are dispatched, and at that time numerous different units from police, fire and ambulance immediately went to the address.

“At that point in time, of course the scene is not secure, and so police have to do what they do, and they need to go in, they need to make sure that safety is first, and that the individuals who are injured are taken care of,” she added. “Due to the concerted efforts of our local police department, as well as our local paramedics and emergency responders, the victims — there are several victims of the shooting — were given immediate medical attention.”

Becker noted that two of the victims were airlifted to a Fort Wayne hospital with severe injuries, while another was sent to a trauma center in South Bend.

“Unfortunately, one of the four siblings that lived in that home — who were all four the victims of that attack — did die at the scene,” Becker said, referencing Richard Rios. “Now, out of respect for privacy of this family, out of respect for the laws of the state of Indiana, we are not going to be releasing the specific names, because several of them are juveniles, and if the family wants to release that information, they are welcome to. But at this point in time, the investigation is ongoing, and we do not intend to release those names.”

Becker was able to confirm that preliminary information connected to the case points to Varela Morales as the shooter.

“The fifth individual that was also found inside gravely injured, was a gentleman by the name of David Varela Morales, 20, originally from the Goshen area,” Becker said. “He was treated at Goshen General Hospital, however he succumbed to his injuries, and he did pass away. There will not be details at this point in time regarding the roles of any individuals involved in what occurred. However, we can tell you, as we did on Saturday, that there is no further risk of additional individuals being injured, as preliminary information does indicate that Mr. Morales was the shooter.”

“Again, I urge you to please respect the privacy of this family as they continue to grieve, and they continue to heal, as there are individuals in that family that are still suffering significantly,” she said.

Pounds, speaking on behalf of his family, offered a similar sentiment.

“I understand a lot of people have questions right now. We just ask for respect, and we will get answers,” Pounds said. “But right now, we have a great crew that’s working on that, and when we have answers, you guys can have answers. But until then, just respect that we need time to let my family heal, because it’s going to be a long time.”

Adrian Mora, youth adviser to the Goshen City Council and a friend of the Arellano Rios family, then urged the community to rally behind the family by donating to a Facebook fundraiser (https://www.facebook.com/donate/1654862178223042) recently created in memory of Richard Rios.

“One thing that I wanted to mention to the community was that the support that the family would like to receive is fundraising, and there’s a fundraiser on Facebook that’s in commemoration of Richard Rios,” Mora said. “Donating to that fundraiser would really help us out.”

Next to step up to the podium was Goshen Police Chief José Miller, who after expressing condolences to the family urged the community to be mindful when it comes to sharing or disseminating unconfirmed information or theories in the wake of tragedies such as Saturday’s shooting.

“I see a few things that have been posted publicly that I want to clear up. One was stating this had to do with gang activity. There is no indication of gang activity, and I feel that comments like that, that are not known, can cast a shadow on the family that’s already going through a lot of things, and a lot of emotions,” Miller said. “And I would just request that the community just, before they put out any information publicly, make sure it’s accurate information. Make sure it’s not something that’s going to hurt families, cause more pain, more grief.”

When questioned about the current status of the three injured victims or Varela Morales’ relationship to the Arellano Rios family, Becker declined to comment, noting that the family’s privacy always comes before other people’s curiosity.

“When a family goes through a tragedy, or anybody goes through a tragedy like this, first and foremost is them dealing with that tragedy and that trauma. Only secondary is somebody else’s curiosity,” Becker said. “What’s going on on Facebook right now is embarrassing to our community. It truly is. There’s misinformation, there’s speculation, there’s gossip and there’s rumor, and it’s ridiculous, and it really needs to stop.

“So, please, put down your cellphones and talk to each other in person. Build those relationships, and build this community the way that it’s supposed to be,” she added. “Don’t speculate, and don’t put out commentary that you don’t know anything about, because you weren’t there, and you don’t know. Let these people have their peace.”

Speaking through a translator, Salazar urged the community to come together and support the Arellano Rios family as they work through this difficult time.

“It hurts me very much what’s happening in my community,” Salazar said. “It doesn’t matter what happened. I just want it to stop. We are one. You remember that word? We are one.

“Please don’t ask any more questions. Respect the family’s privacy,” she added. “Lets continue in prayer. Let us offer the amount of money to this mother who is experiencing this situation, because I am a mother. I don’t know her, and maybe some of you don’t know her either, but it hurts, and no one deserves to go through something like that. What she needs right now, and her children, is support, is positivity and love. That’s the only thing that we should do.”