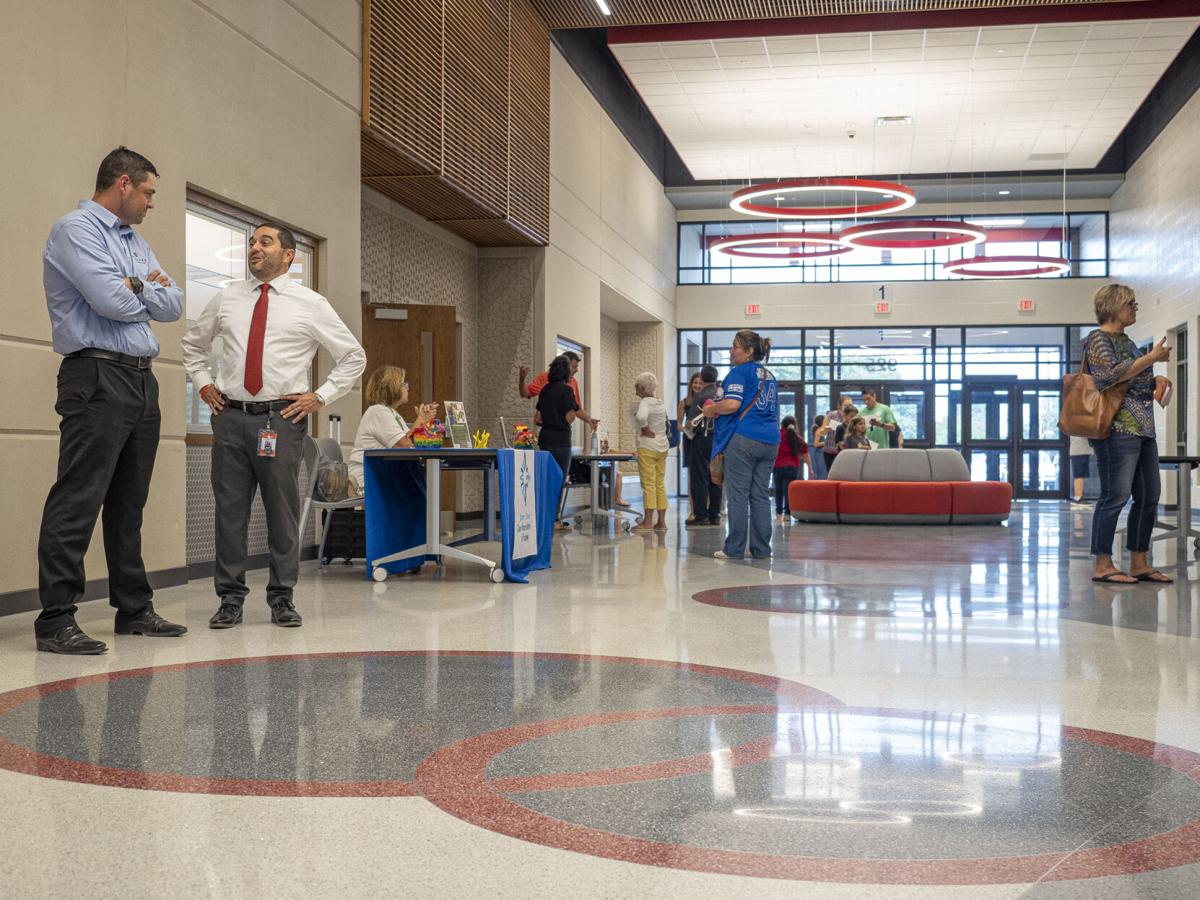 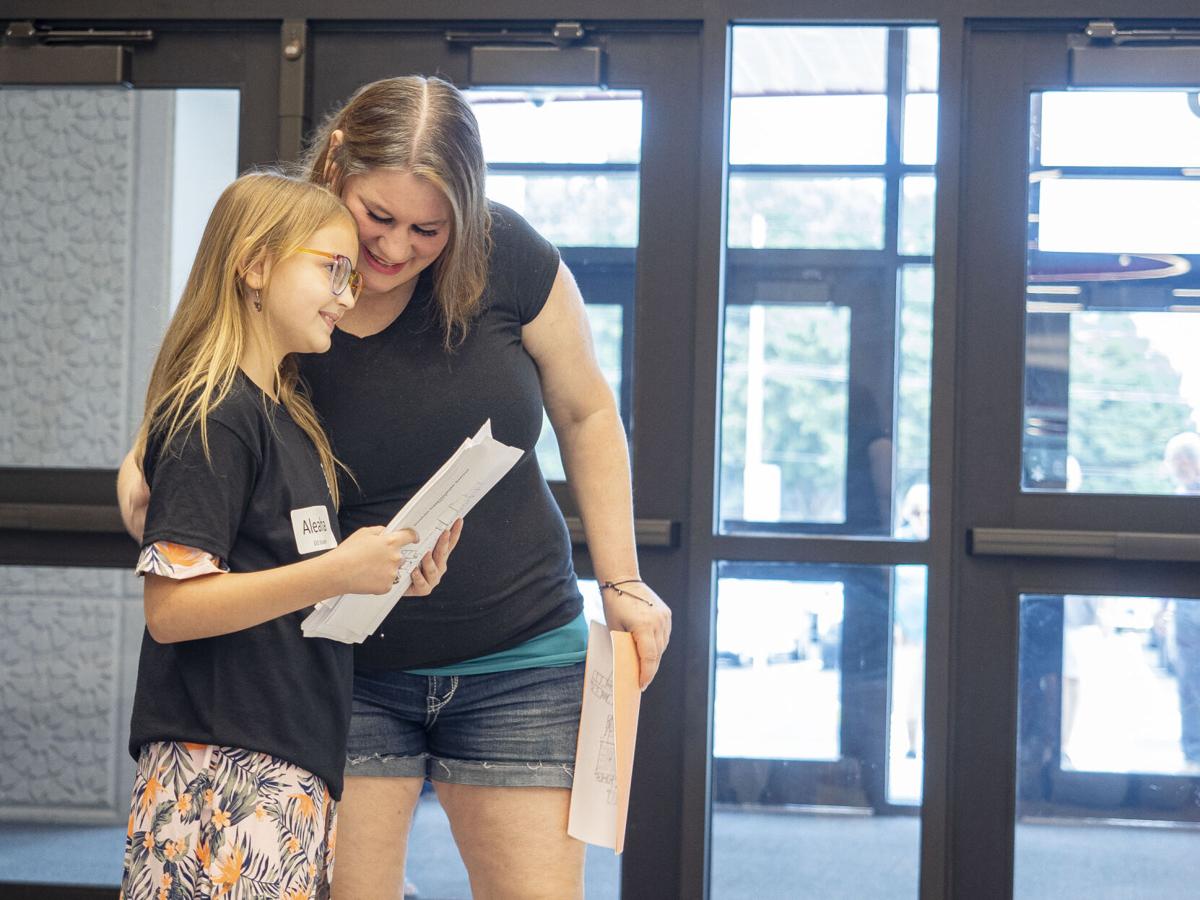 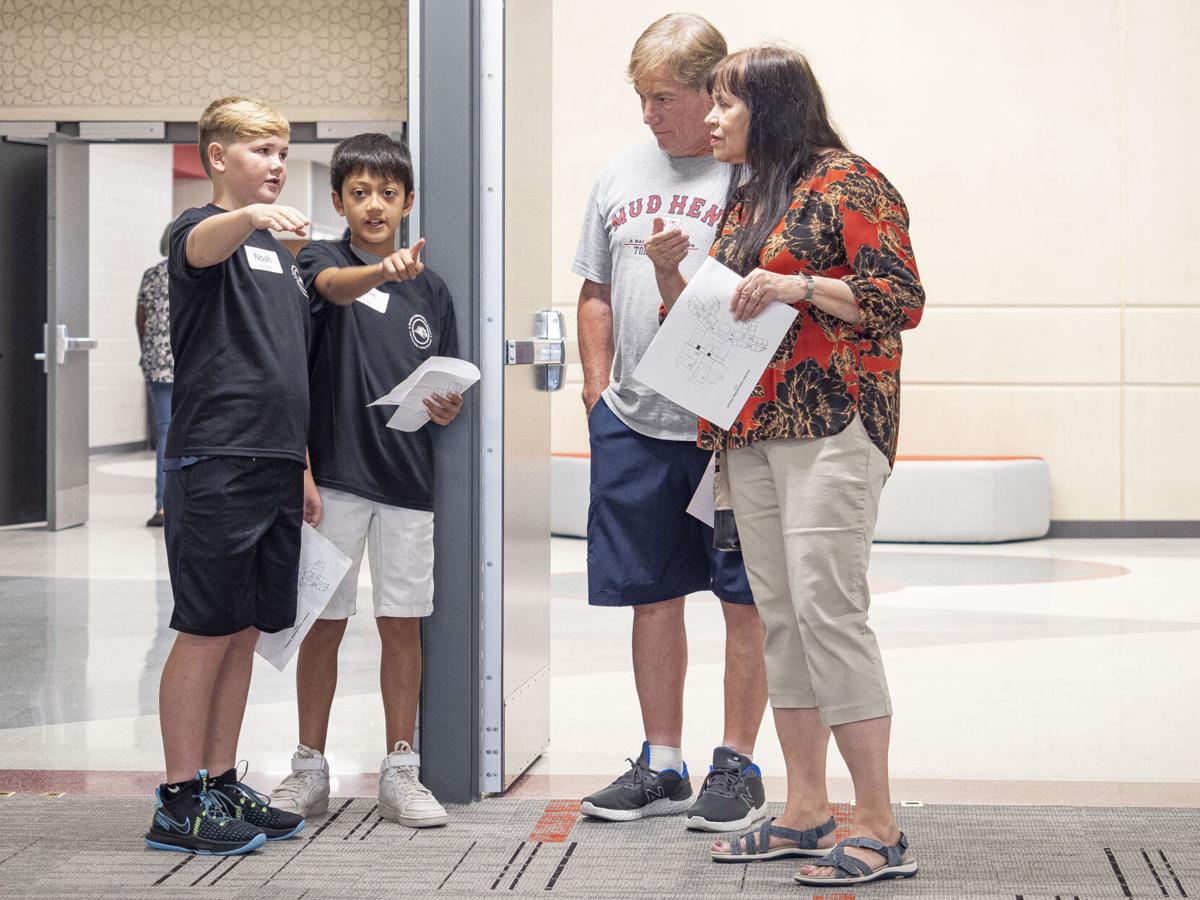 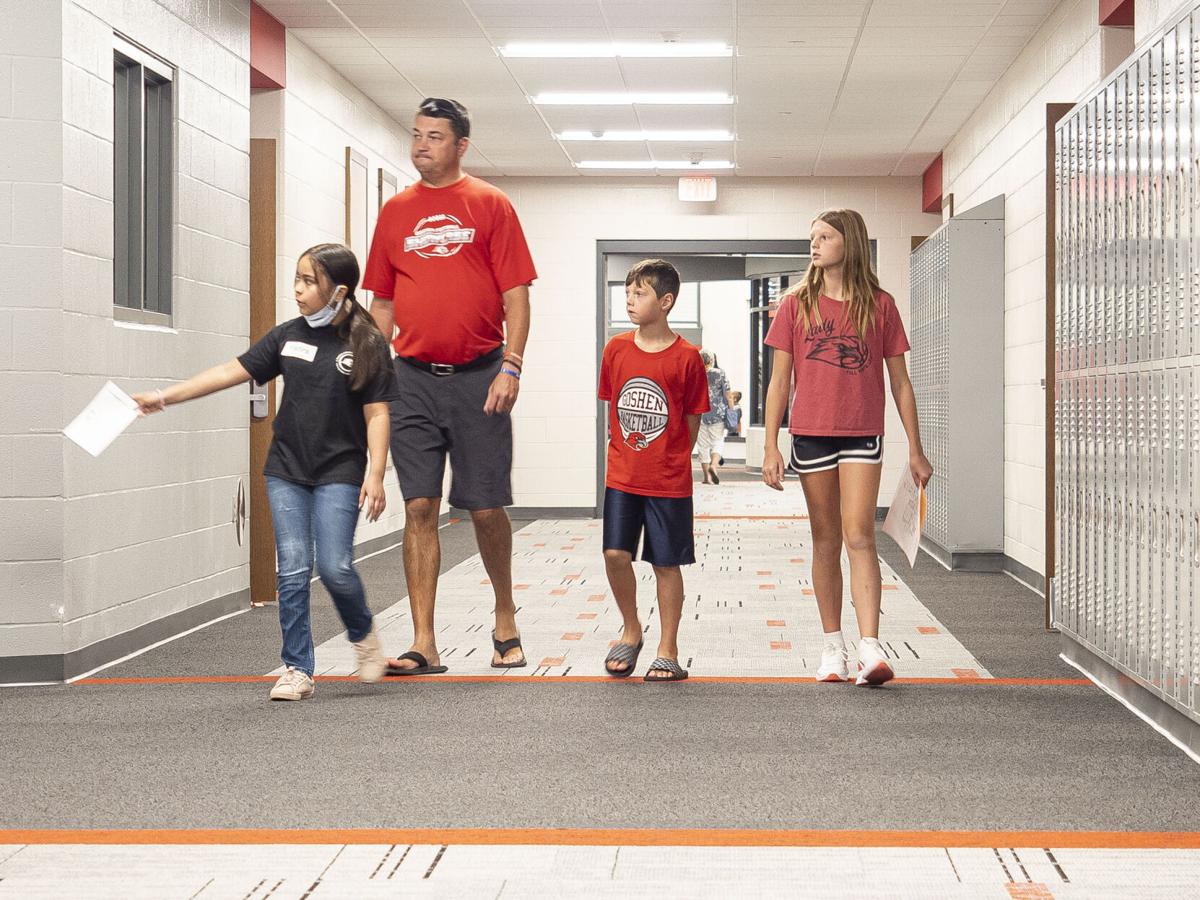 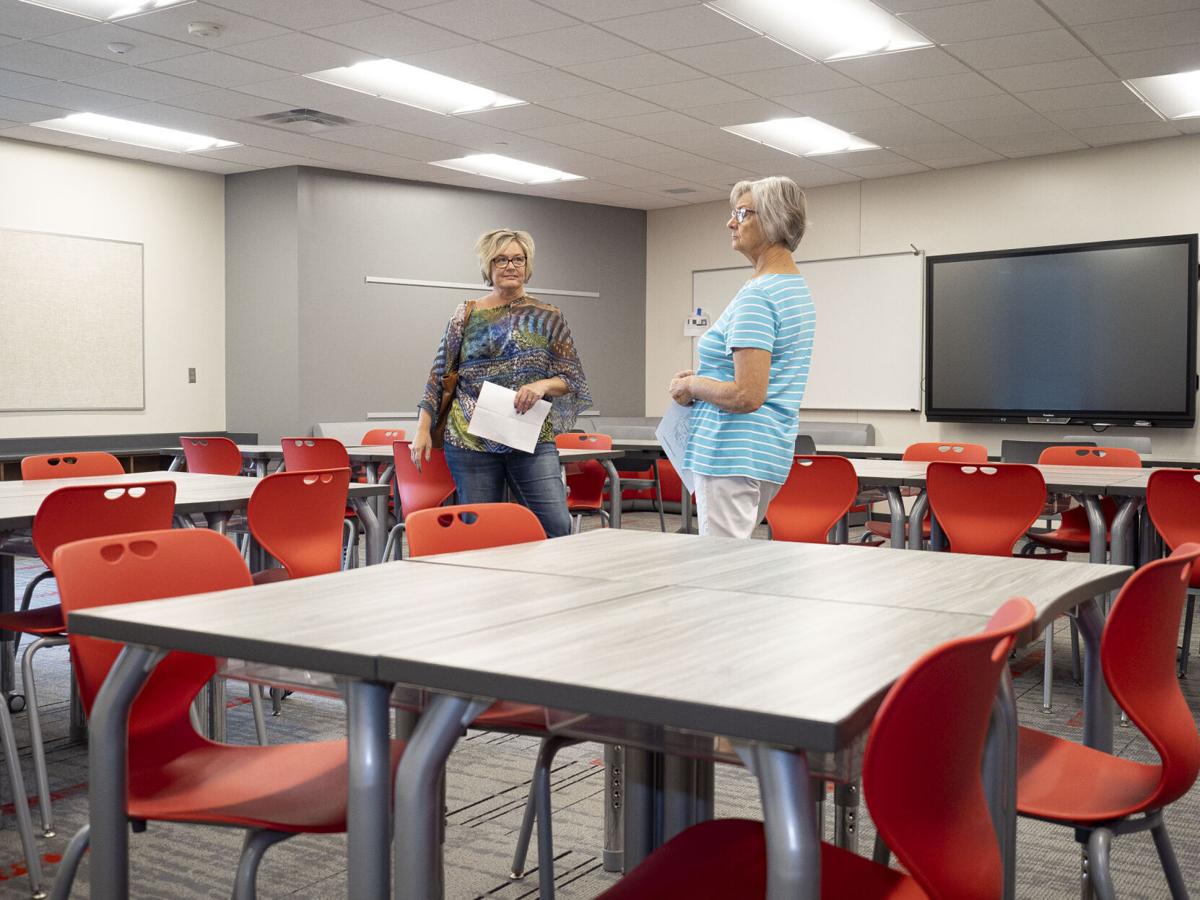 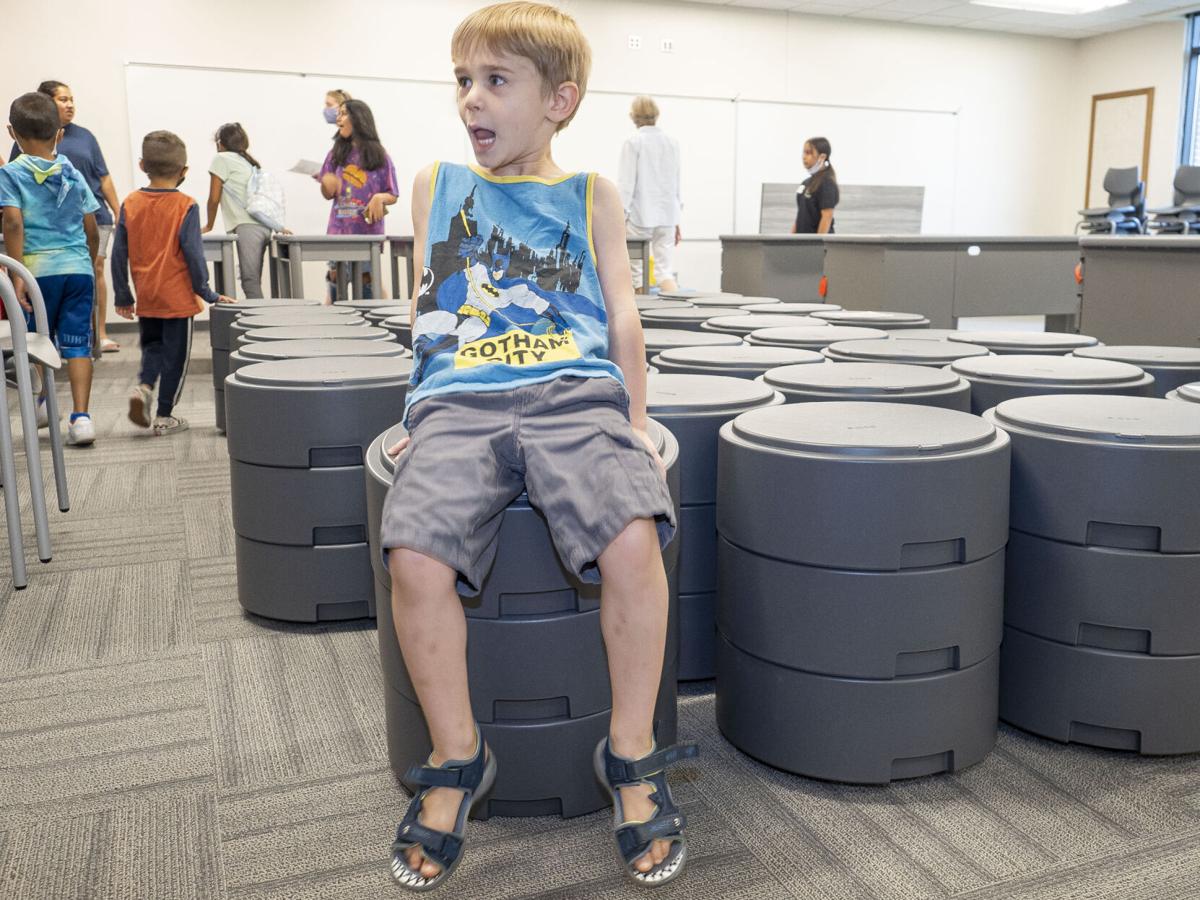 Alexavier Steiner, 5, sits on a OODLE31 in a special education classroom Monday. 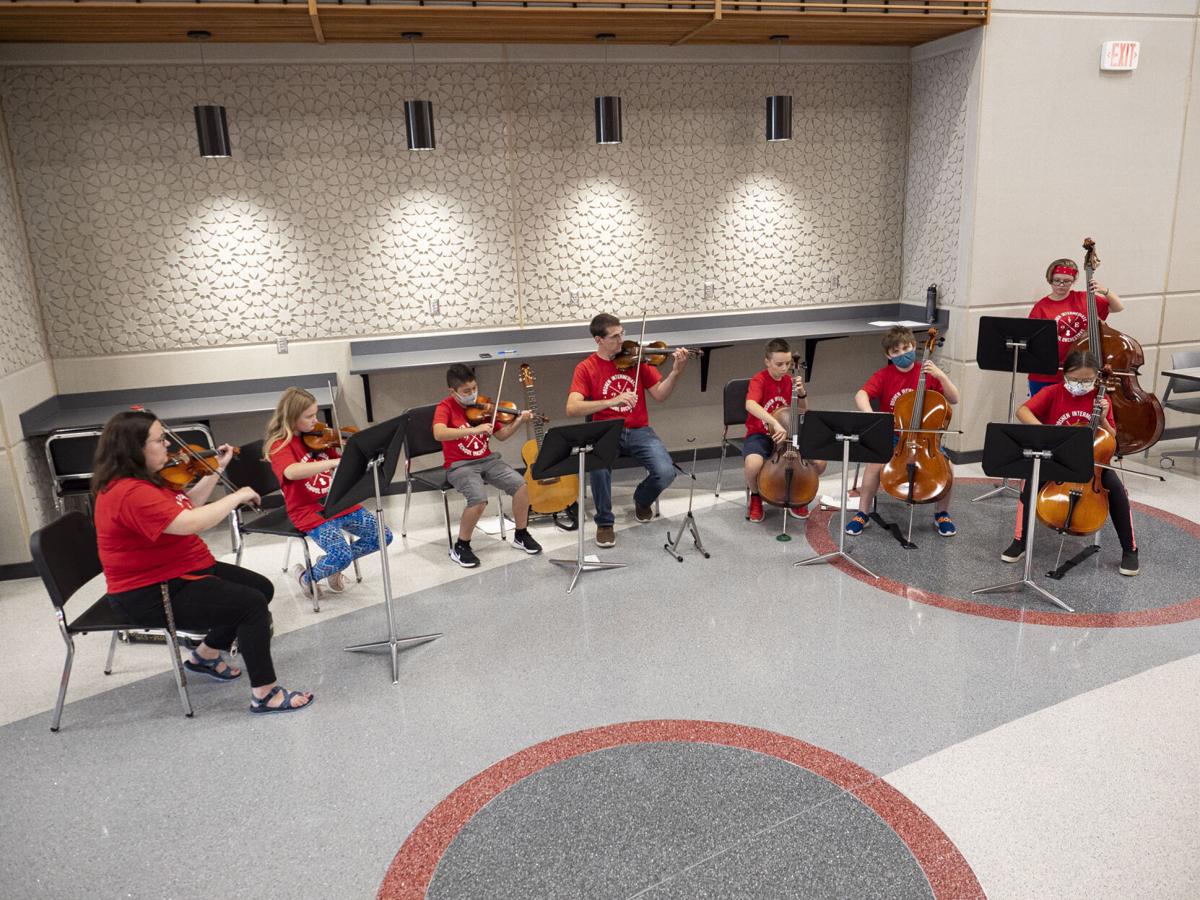 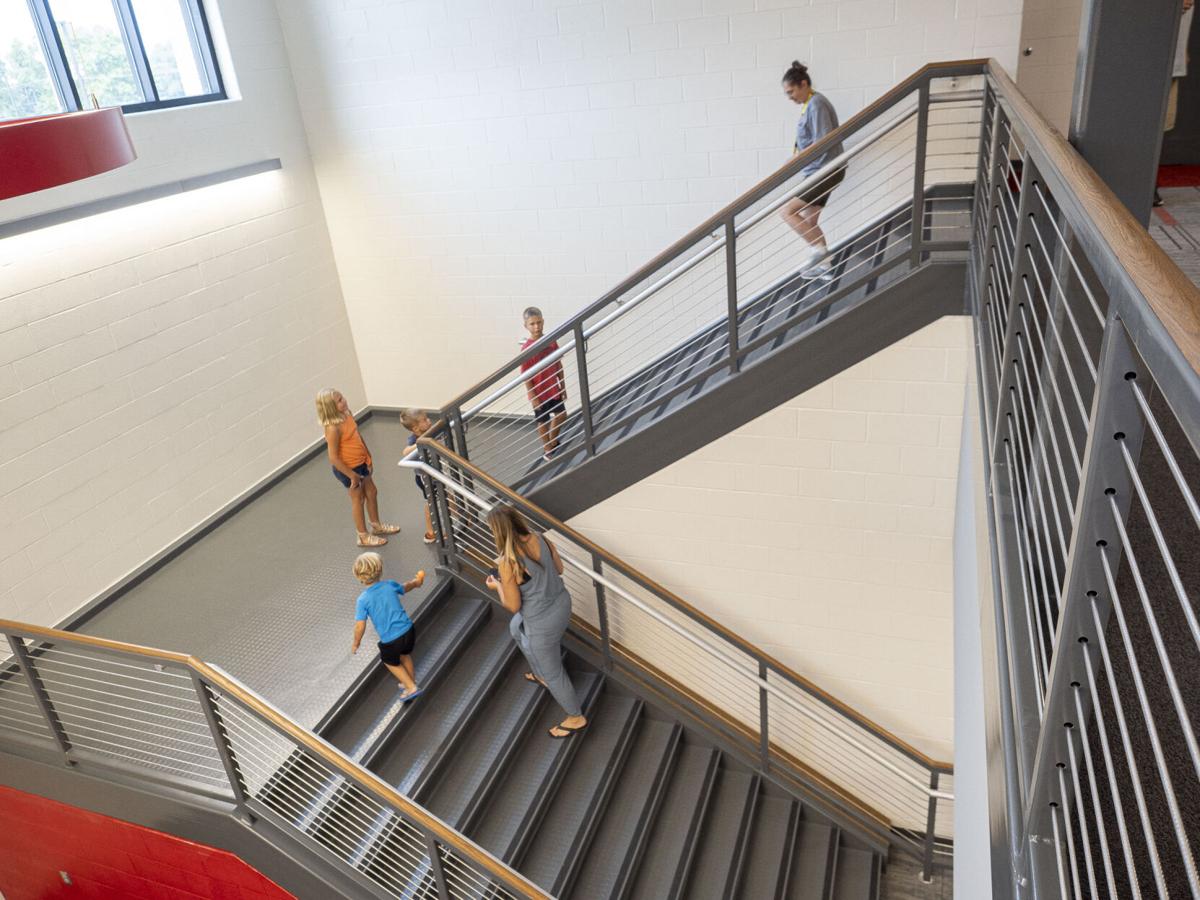 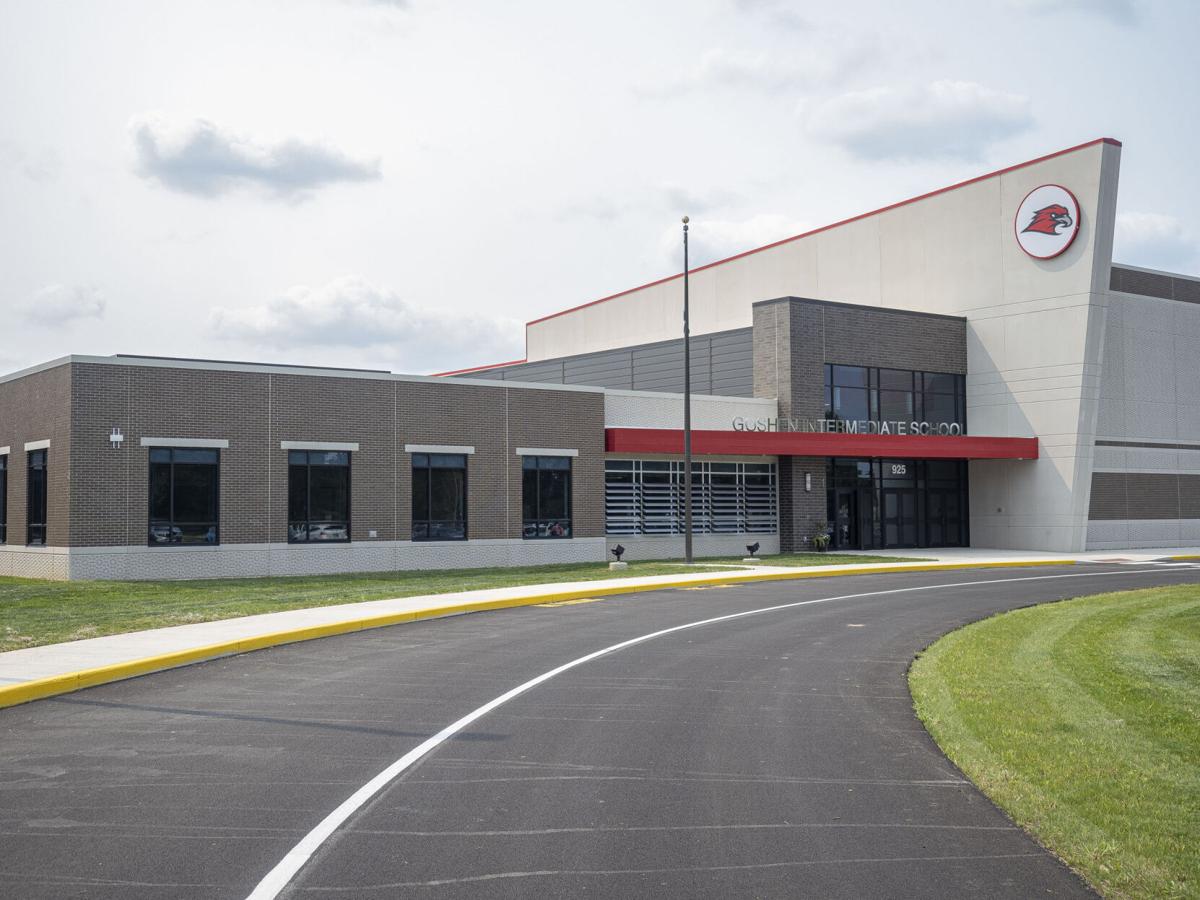 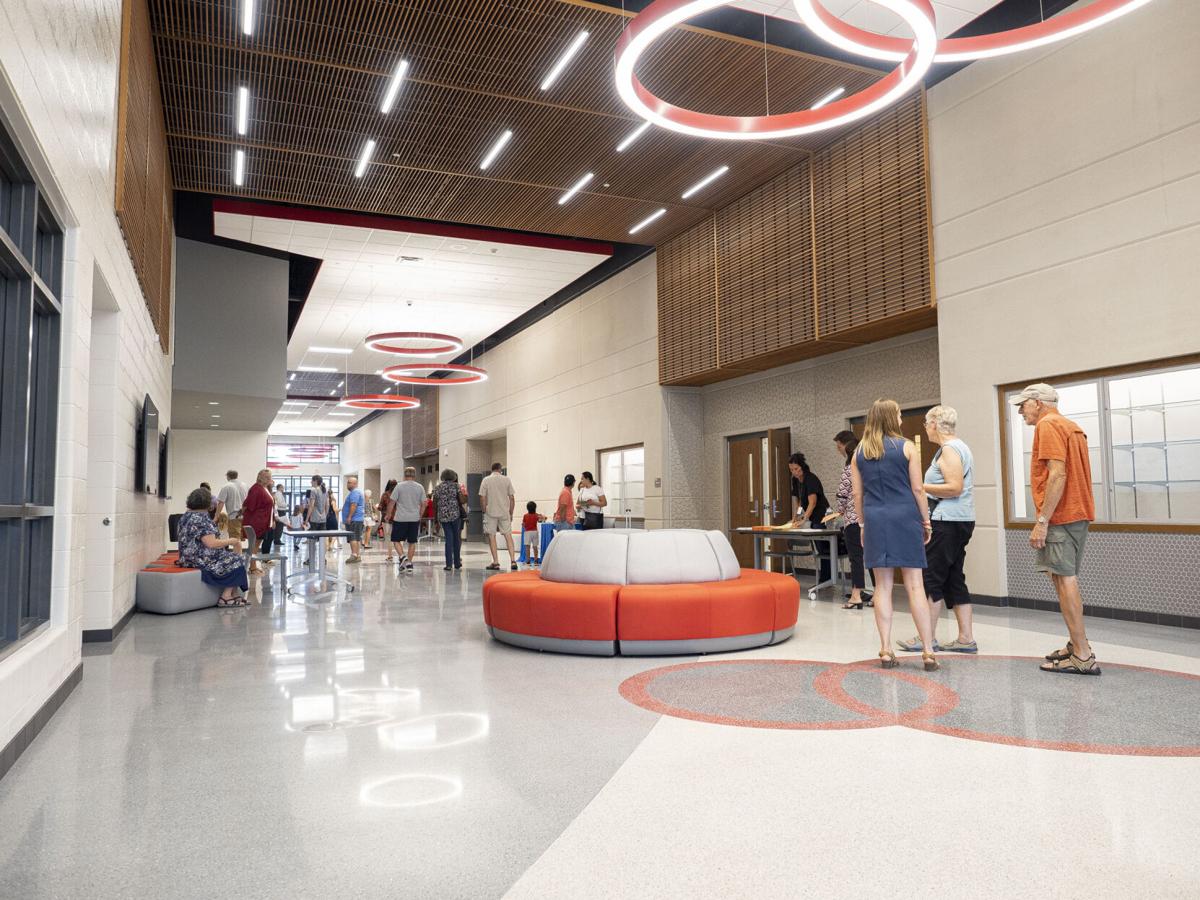 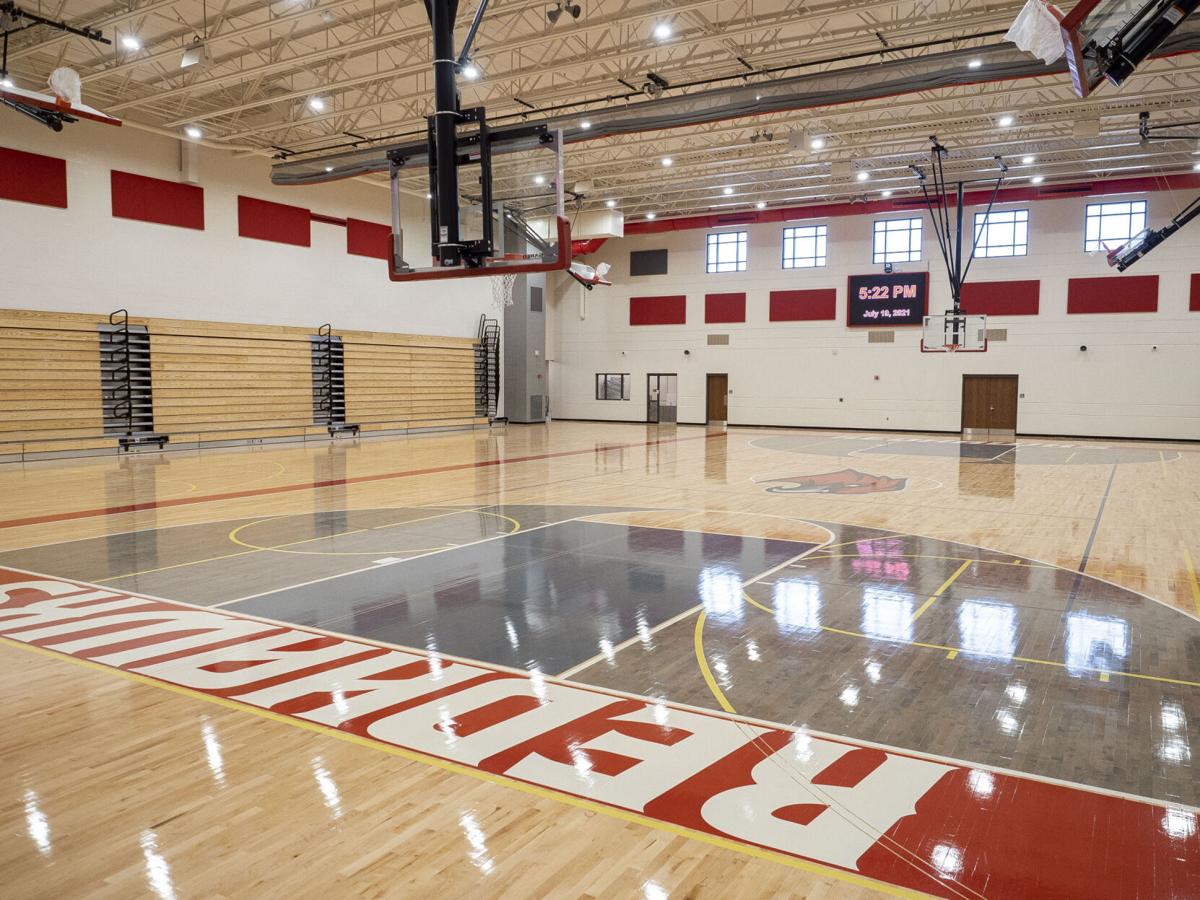 Alexavier Steiner, 5, sits on a OODLE31 in a special education classroom Monday.

GOSHEN — On Monday, both community members and staff entered the new Goshen Intermediate School for the first time during a community open house event.

The project was completed at a cost of $35 million to the Goshen community, which was included in a referendum that passed May 8, 2018, during the primary elections. The referendum allotted $44.9 million for GIS.

“The remainder of those funds was used for the addition/renovations at Goshen High School and Goshen Junior High School,” Goshen Community School Director of Communications and Public Relations Lori Martin said in a text message.

And so I want everybody to have a part to play in what this place is going to look like — from the expectations to be in the cafeteria to what we do during a fire drill. There’s going to be a lot of cool and probably some different ways of doing things around here, because I want to give these teachers a chance to build some things maybe they haven’t had a chance to build, and the students have a say in how we build it.”

The school has 44 spaces in total for student learning.

“The number of academic classrooms this year we’ll be utilizing is 36; 18 on the fifth-grade side and 18 on sixth-grade side,” Trejo said. “We’ll have eight specials teachers. Those are additional in specials like our PE, our art, our music, and our stem. So those classrooms will be utilized as well. So all together that will be 44 rooms or spaces used for kids throughout the year.”

“The building is just under 200,000 square feet and its two stories split between classrooms and mechanical rooms in certain areas,” Bush said.

The project saw some challenges along the way.

“Most people would say that during the COVID time, that obviously hurt everybody,” Bush said. “It actually ramped our project up. Because we had 36 acres of land, we were able to spread everybody out in certain areas so we were able to do social distancing, so it actually helped us.

“The biggest thing with the precast panels — you’ve got a lot of coordination up front that has happened before you even get the first contractor on the site, so I think that’s the most challenging because everything you see in walls of the precasts had to be coordinated before they were made. It is a lot of shop drawings and going through and verifying.”

Bush said he felt a sense of accomplishment.

“The biggest is being able to see it go up on time, when the school needed it,” Bush said. “So this was a really fun project to work with the school corporation on. It went really well — pretty smooth transition.”

Bush indicated that timing for the project worked out well.

“Obviously with construction you’re going to have some things that end on time, somethings are late, but at the end of the day this building came in on time and that’s the important part,” Bush added. “The school district received its certificate of occupancy for the school Friday, July 16.”

One staff member shared her opinion.

“The most I’m looking forward to is kids being back in school in person,” Goshen Intermediate School fifth-grade teacher Jan Lengacher said. “For the intermediate school, I’m excited that all seven elementary schools are coming together. Building a new community of learners, and just excited to start something new.”

Another school official touched on a coming sense of normalcy.

“We are thrilled to have these open houses for the community,” Goshen Community Schools Superintendent Steve Hope said. “We want the entire community to see what their referendum dollars (have accomplished). We’re thankful to the community for passing the referendum to see what they bought. We got a lot for our money, a great place to serve our students and families as well for many, many decades to come.

“I’m looking forward to a more normal school year. The pandemic is still with us, so we still have mitigation efforts, but this year will be much more normal compared to last.”