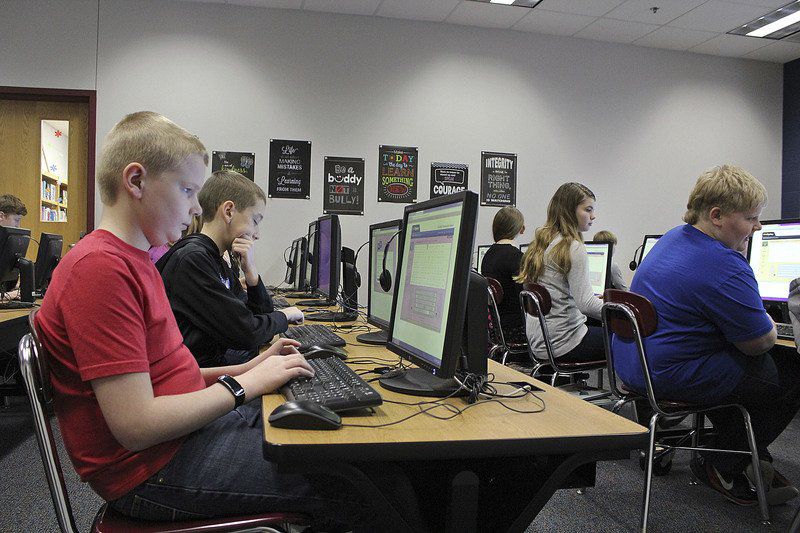 In this January 2016 file photo, students at New Paris Elementary School use computers during class. The ILEARN results for Fairfield students can be found in the accompanying chart. 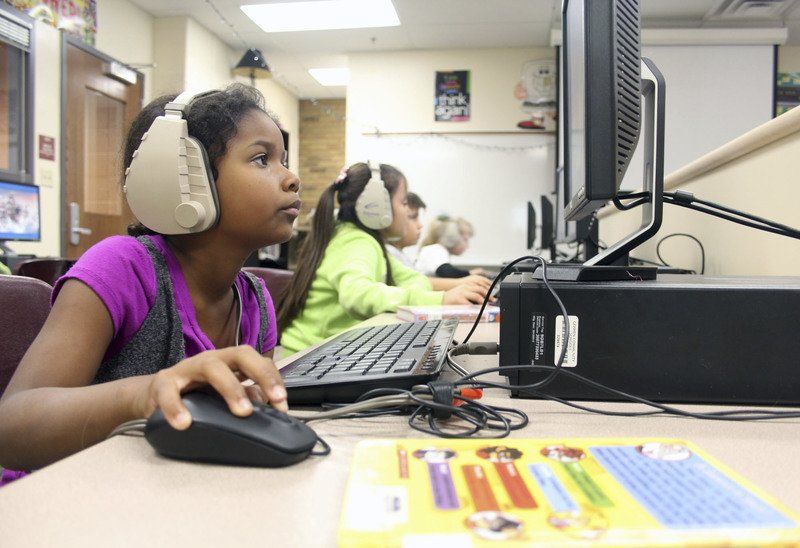 Tessa Sommers works at a computer during class at Parkside Elementary School in this Sept. 20, 2014, file photo. ILEARN scores released for Goshen students, and students statewide, were below what had been anticipated when the new testing system was created. 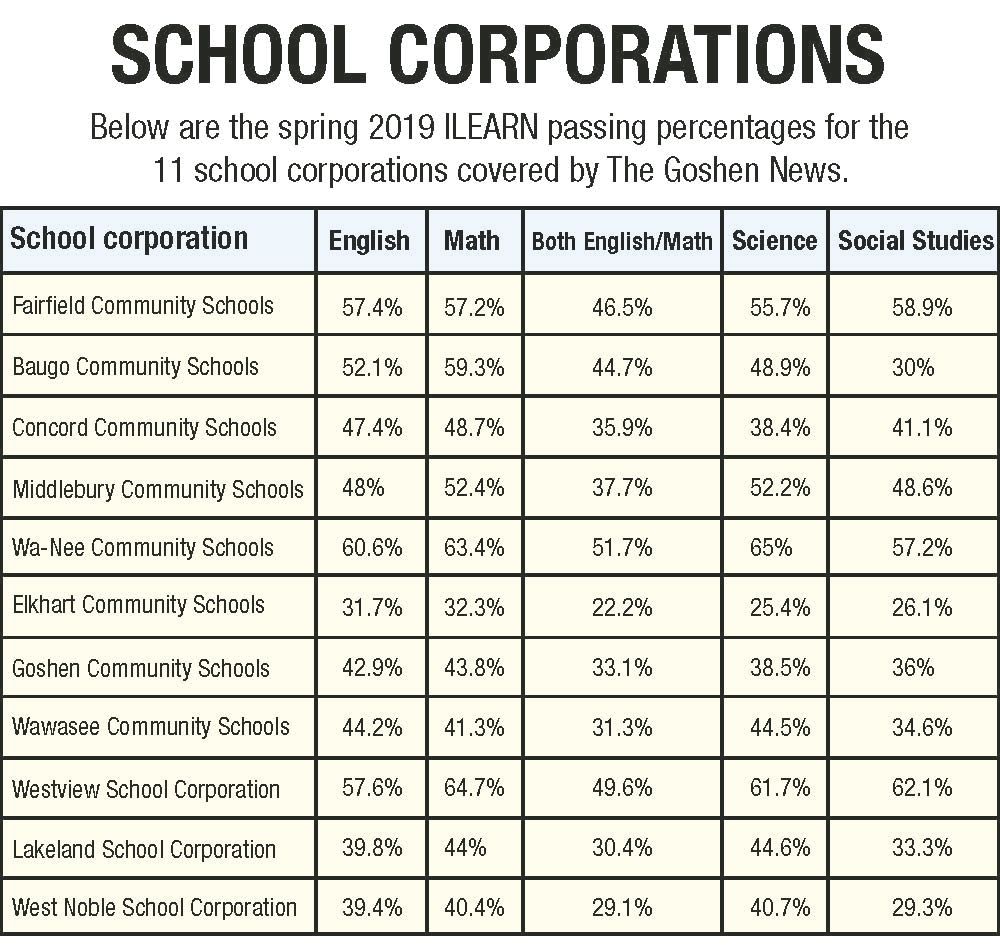 In this January 2016 file photo, students at New Paris Elementary School use computers during class. The ILEARN results for Fairfield students can be found in the accompanying chart.

Tessa Sommers works at a computer during class at Parkside Elementary School in this Sept. 20, 2014, file photo. ILEARN scores released for Goshen students, and students statewide, were below what had been anticipated when the new testing system was created.

Student scores from Indiana’s new ILEARN standardized exams were released Wednesday by the Indiana Department of Education, indicating lower achievement levels both locally and across the state when compared to past ISTEP+ scores.

Mandated during the 2017 legislative session and developed with input from more than 1,200 educators, ILEARN, or Indiana’s Learning Evaluation Readiness Network, was created to serve as a replacement for ISTEP+, which for years had faced complaints about the number of days students spent taking the test and how much time school staffs spent preparing students for it.

According to the IDOE, ILEARN was designed to assess the same Indiana Academic Standards as ISTEP+, but with a redefined focus on rigorous college-and-career readiness.

Spring 2019 served as the first official testing period for the new state exams, which this year assessed proficiency in English/language arts and mathematics in grades 3-8, science in grades 4 and 6, and social studies in grade 5. The results from such assessments have historically been used to give state rankings to schools and play a role in teacher evaluations and pay raises.

Described as a summative, standards-based assessment that is also computer-adaptive, each ILEARN test question is selected by a computer algorithm, based on the student’s performance on previously administered items. As such, the adaptive test is tailored to the student’s ability based on whether the student responded successfully to the preceding item or sets of items, with each response helping to determine the next question or set of questions that will be presented to the student.

According to Indiana Superintendent of Public Instruction Jennifer McCormick, when compared to past ISTEP+ scores, ILEARN’s scores from the spring 2019 testing period indicated lower achievement levels across the state in both English/language arts and mathematics.

“While performance dips to some degree were expected, the combination of the rigors associated with this newly aligned CCR assessment, national normative data, and the defined established performance cuts all contributed to the lower performance levels,” McCormick said of the results in a provided statement. “With the negative impact assessment results have on educators, schools, districts, and communities, IDOE will advocate for responsive legislative action.”

Figures released Wednesday by the IDOE show that 47.9% of Indiana students in grades 3-8 passed the English section of the exam, while 47.8% had passing math scores. A total of 37.1% were listed as having received passing scores on both the English and math sections of the test.

“While the 2019 ILEARN results do not provide a true reflection of the performance of Indiana’s schools, they do once again show us the importance of developing a modernized state legislated accountability system that is fair, accurate, and transparent,” McCormick added of the new test. “With this in mind, the department will propose the following legislative actions: place a ‘hold harmless’ year on 2018-2019 letter grades, pause intervention timelines for all schools, and provide the State Board of Education with emergency rulemaking authority to review and reestablish the state accountability system. The success and wellbeing of our students, educators and schools are dependent upon these actions.”

According to Alan Metcalfe, assistant superintendent in charge of elementary education for GCS, while the school corporation’s scores admittedly show room for improvement, they were not necessarily unexpected.

“The state had sent indications that the ILEARN scores were going to be lower statewide after the initial scoring, so we had anticipated a drop in scores for the district,” Metcalfe said of the test results. “Throughout the last school year the IDOE had been releasing resources to prepare schools and students for the new assessment. GCS was diligent in making sure our teachers were aware of the differences in the technology-enhanced questions and the rigor at which the standards were to be assessed.”

Metcalfe said standardized assessments do not always capture the entirety of the learning that is taking place within a school district, such as GCS.

“That being said, we realize that the ILEARN is how the state chooses to monitor proficiency levels across the state, and as such we have a responsibility to provide curriculum and instruction that will ensure our students succeed,” Metcalfe added of the test. “When we examine the scores for Goshen, there is some initial disappointment in the totality of the scores. But once we started digging into the data, there are some bright spots in areas that we can continue to build on.”

“The scores in Goshen Community Schools are closer to the state average than in previous years with ISTEP,” Hope said of the ILEARN results. “In English/language arts, that gap between the state average and our scores in many grade levels was almost closed. We also saw gaps between Goshen Community Schools’ average scores and the scores of subgroups narrow, providing further evidence that more students are mastering state standards. We certainly have room for improvement, and we will continue to close these gaps and then surpass state averages.”

Moving beyond the scores, GCS Superintendent Diane Woodworth pointed to several aspects of the new ILEARN examination that she, teachers and administrators see as marked improvements over the ISTEP+ exam.

“We like that overall, it took less time to administer and was later in the school year. We like that it was computer adapted. We like the better reports that are available after testing, which can be used to further inform our instruction,” Woodworth said of the test. “I would hope that the state will stay with this test for quite some time now. The changing of tests every five years or so is frustrating for all concerned.”