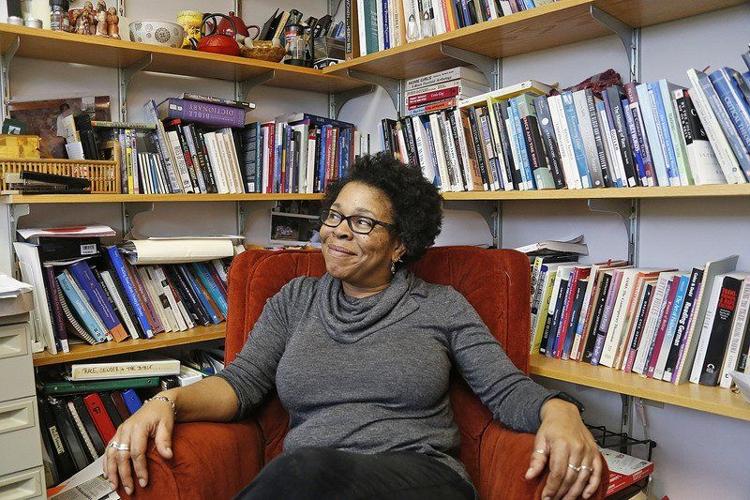 MICHAEL CATERINA | THE GOSHEN NEWSRegina Shands Stoltzfus in her office at Goshen College. On Thursday she recieived the Indiana Civil Rights Commmision’s “Spirit of Justice Award.” She will be honored Monday at Goshen College. 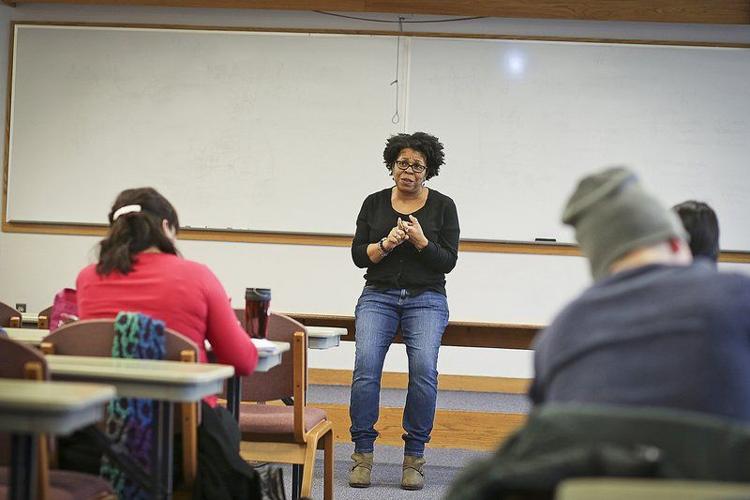 PHOTO CONTRIBUTEDRegina Shands Stoltzfus, assistant professor of peace, justice and conflict studies at Goshen College, teaches the Transforming Conflict and Violence class in January 2016. She has been awarded the 2016 Spirit of Justice Award by the State of Indiana Civil Rights Commission, their highest honor.

MICHAEL CATERINA | THE GOSHEN NEWSRegina Shands Stoltzfus in her office at Goshen College. On Thursday she recieived the Indiana Civil Rights Commmision’s “Spirit of Justice Award.” She will be honored Monday at Goshen College.

PHOTO CONTRIBUTEDRegina Shands Stoltzfus, assistant professor of peace, justice and conflict studies at Goshen College, teaches the Transforming Conflict and Violence class in January 2016. She has been awarded the 2016 Spirit of Justice Award by the State of Indiana Civil Rights Commission, their highest honor.

“It’s something that I talk to my students and people I meet outside of the classroom about all the time, that you need to know who your people are, the people who you are journeying with, but also the people who can step up when you can’t do it that day,” she said.

When Shands Stoltzfus learned she would be honored with the Indiana Civil Rights Commission’s highest honor, the 2016 Spirit of Justice Award, she was both surprised and humbled.

“On the one hand, it feels nice to be affirmed for doing work that I feel is really, really important,” she said. “But on the other hand because I believe deeply that this is work people do together, I think it’s a little weird.”

And Monday, she’ll be celebrated as part of the annual MLK Day events at Goshen College.

A native of Cleveland, Ohio, Shands Stoltzfus spent much of her young adult years seeking experiences that would later influence her to pursue a life of advocacy.

“I was raised in an urban Mennonite church,” she said. “I grew up with peace and justice theology, I grew up with people who modeled for me very well what it meant to do service, to commit one’s self to a life of social justice.”

But it wasn’t until she ventured to northeast Thailand to work in a refugee camp that Shands Stoltzfus said those lessons began to affect the trajectory of her life.

From 1979 to 1981, Shands Stoltzfus lived in northeast Thailand and worked primarily with refugees from Laos. The experience was transformative in ways she never expected.

“When I was in Thailand and I saw these refugees, the collateral damage of other people’s decisions, just being there for two years and seeing what war does to people who didn’t chose that fight really got me thinking,” she said.

When she returned home to Cleveland in the early 1980s, she became involved with Witness for Peace, an activist organization that encouraged people to educate themselves on issues and share that information with others.

That work led her to positions with several Mennonite agencies that centered on aspects of peace education.

Meanwhile, Shands Stoltzfus shifted some of her focus to what she calls the other “obsession” of her life — thinking and teaching about race and racism.

She co-founded the Damacus Road anti-racism program, now called Roots of Justice Anti-Oppression program, and began leading workshops to share her passion with others.

“That’s what I spend much of my time thinking and talking about and I love it,” she said. “The more we know how to even talk about these things, the better we are at figuring out what to do about them.”

In 2002, she was hired by Goshen College as a campus pastor and later became an assistant professor of peace, justice and conflict studies.

She works with students at all levels, beginning when they are freshmen as part of the college’s “Identity, Culture and Community” course.

Prior to her time in Elkhart County, she also served as associate pastor at Lee Heights Community Church in Cleveland.

Shands Stoltzfus said she truly believes making a difference in the world isn’t something one can do alone — a message Martin Luther King Jr. often shared.

“We set aside this day, and rightly so, to say ‘here is this man who believed in these ideals and whose work reflected everything he believed’ and the people he surrounded himself with really meant something,” she said. “And the other piece of that is that he did not do it alone. He spoke often about the work he did in the context of community. He talked about his ‘beloved community.’”

As compliments and well wishes began to pop up on her social media accounts, Shands Stoltzfus gave thanks.

“I just wrote ‘ya’ll are my beloved community,’” she said. “And I really believe that.”

Do you plant to participate in surveys and/or sessions on the growth of Goshen?