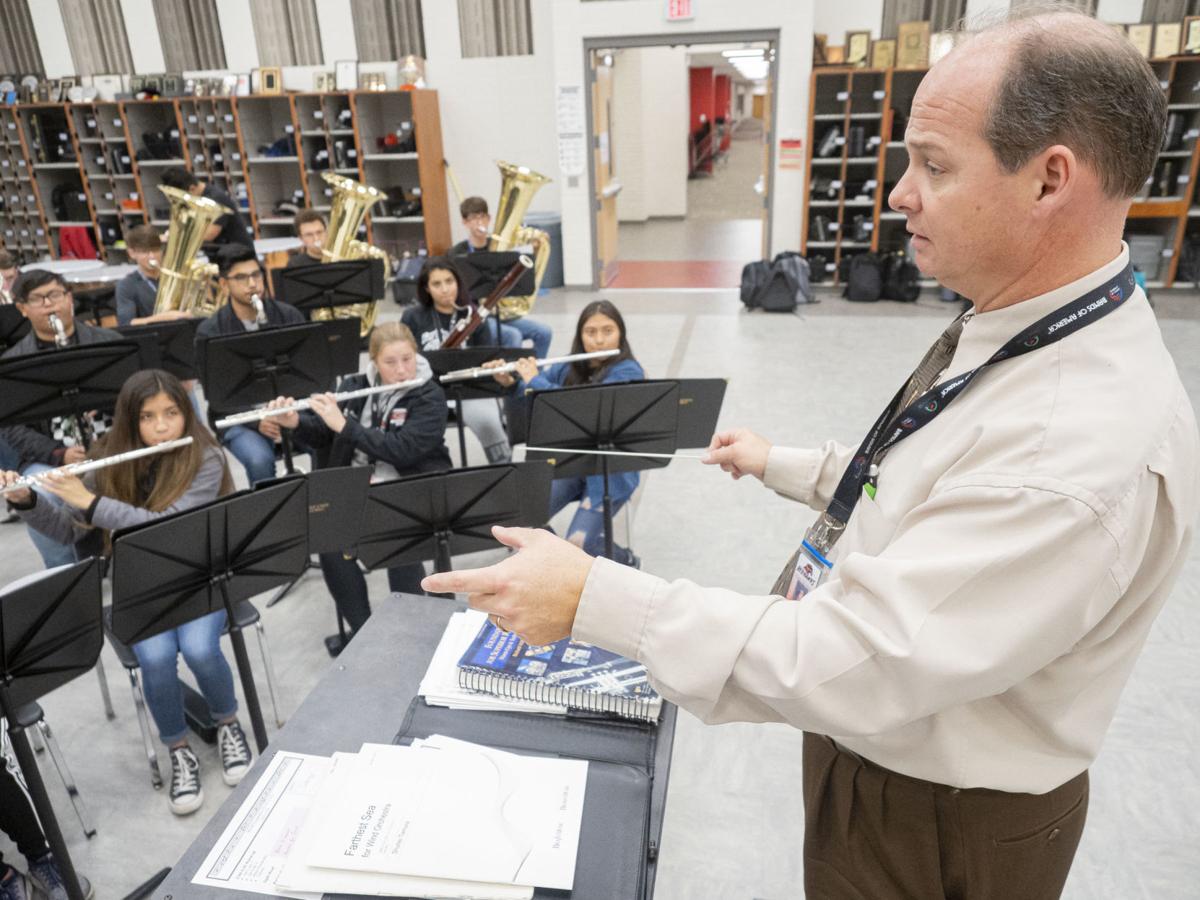 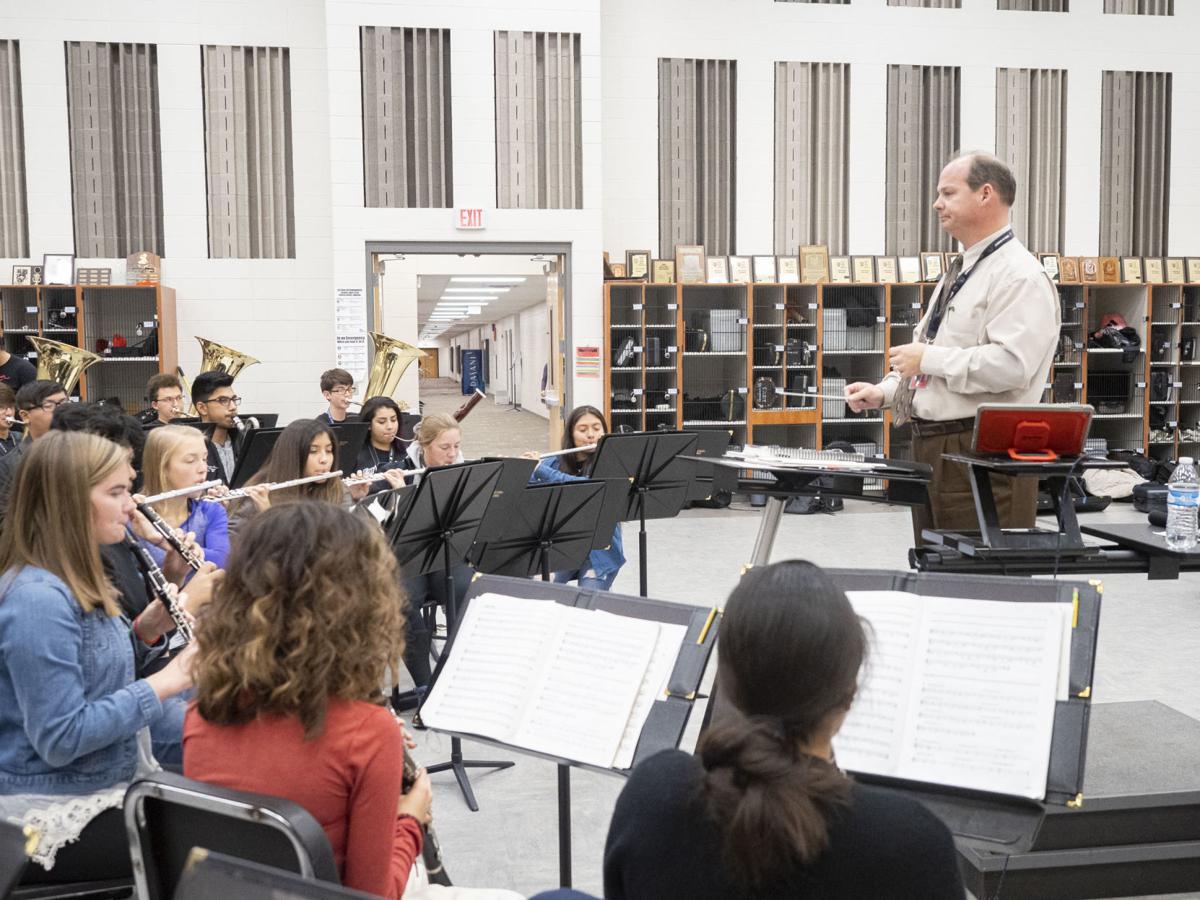 “It’s great. I’m honored to get it,” Cox said of the award while taking a few minutes away from his students at the high school Tuesday afternoon. “It’s kind of out of the blue. I was told that I was one of the finalists, then they said they’d take a vote and get back to me. Then I got the official email. So it’s very nice, and humbling.”

According to the IMEA, the annual Outstanding Indiana Music Educator Award recognizes educators in each of the following areas whose work has made a positive impact in music education in Indiana: elementary, middle school/junior high, high school and college/university.

Nominations are accepted between Aug. 1 and Oct. 15 of each year, and honorees are recognized at the IMEA Professional Development Conference, which for 2020 will be held Jan. 18 at the Embassy Theatre in Fort Wayne.

In the award announcement, received by Cox Nov. 15, IMEA award co-chairs Betty Martens and Amy Dedina laud Cox for his ongoing dedication to music education in the state, noting “Your hard work on behalf of Indiana music education is greatly appreciated! Congratulations, and thank you for all you do for music education in our Hoosier state.”

According to the IMEA, the Indianapolis-based nonprofit is a professional membership organization serving music teachers of all primary, secondary and tertiary levels.

“Our membership is currently comprised of about 1,100 active teachers, 100 retired members, and 700 collegiate members who are music education majors,” the organization’s website states. “As the federated state unit of NAfME (National Association for Music Education), IMEA’s purpose is to support and advance music education in the state of Indiana; we do this by representing the united interests of music educators and students and by providing professional leadership and service in music education to enhance arts education in schools.”

Cox noted that the IMEA is one of two primary music education organizations in the state, along with the Indiana State School Music Association.

“So you have ISSMA, which is responsible for state marching band competitions, solo and ensemble, all that kind of stuff. And then you have IMEA. They host a convention every year, where there are groups that come and play, and clinics, etc. And their general goal is just to promote music education in the state,” Cox said of the nonprofit.

Cox is now in his 27th year of teaching music in Indiana, the last 19 of which he has spent with Goshen schools.

“And honestly, this is not a one-man show. I feel a little bit bad about getting this award, because Josh Kaufman, and Max Mault, and Max Johnson, we’re all a team. I just happen to be the old guy who has been here the longest,” Cox said of his fellow band directors within the school corporation. “So for us, 19 years ago it was just Max Mault and I, and as the programs have grown, we’ve been able to hire more people. So it should really be a team award for Goshen, because we teach 6 through 12, all of us. And it didn’t start that way, obviously. But the administration has been really good to work with as far as listening, and understanding that this class has to go at this time, and that one at that time, because when you think about it, there are 500 kids in band in Goshen, and four teachers. So it’s definitely a team effort.”

So, with nearly three decades of teaching music now under his belt, what is it that keeps Cox coming back to the classroom year after year?

“Music bridges the gap. It helps build the brain. A strong arts program is I think vital to kids’ education. And if I could wave my magic wand, everyone would be in something, either band, orchestra or choir. Because to me, it’s that important,” Cox said. “It touches part of the soul that no other class does, which I think is important for kids nowadays when they’re stuck in their phones all the time. When you actually have to put that phone down and work with the others around you, breath at the same time, listen to each other, play in tune... You’ve got to form relationships with other people and learn to work together. I think that’s one of the bright spots for Goshen, is that we’ve been able to maintain a strong program. And that’s a credit to our administration for letting us do it. But I think the community also supports us, and they think that we’re valuable.”

Cox is a 1988 graduate of Fort Wayne Northrop High School and a 1993 graduate of Ball State University.

He has been named a “Who’s Who Among American Teachers” numerous times and in 2009 was named to the Sousa Foundation’s “Legion of Honor” for outstanding contributions in music education.

In 2016, Cox was named the Michiana Outstanding Music Educator, and in 2017 he was inducted into the Phi Beta Mu International Bandmasters’ Fraternity.