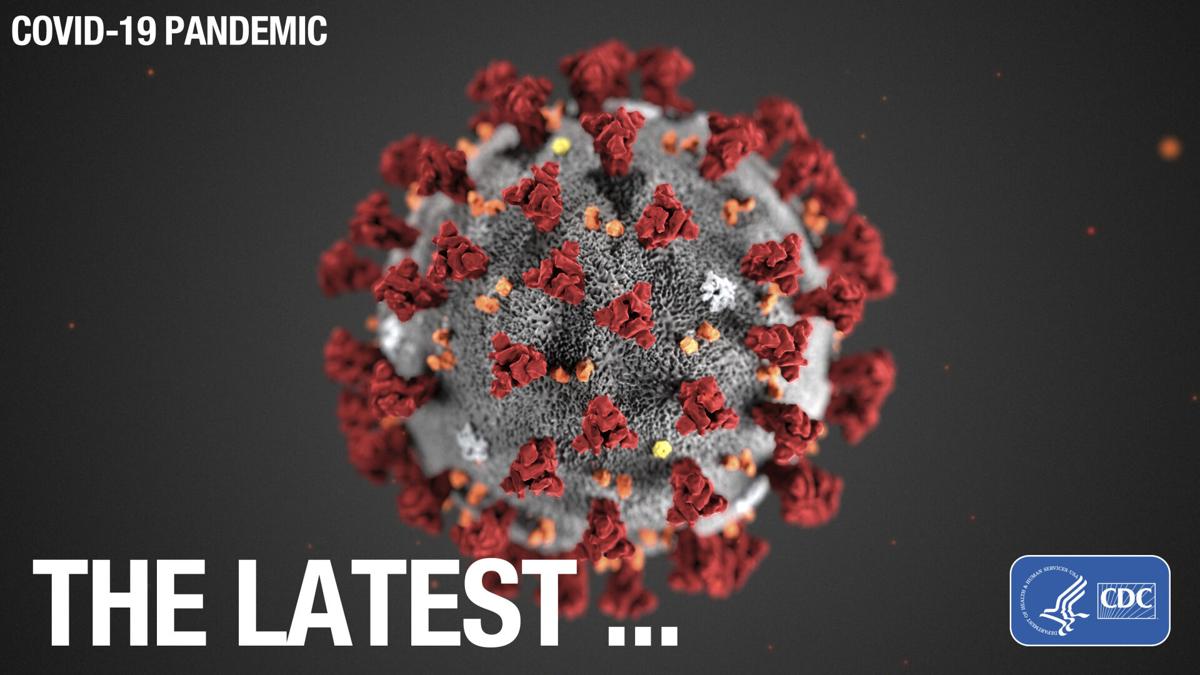 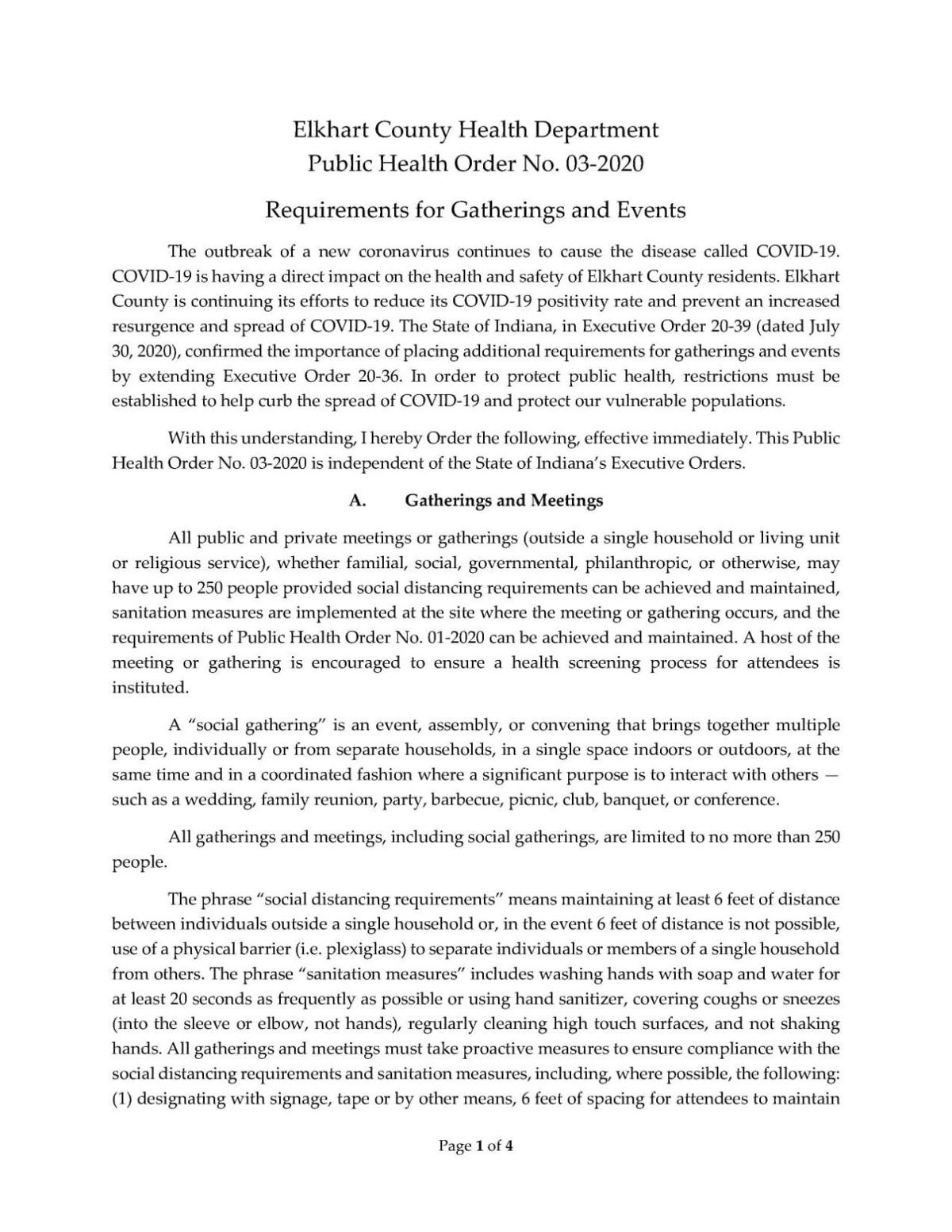 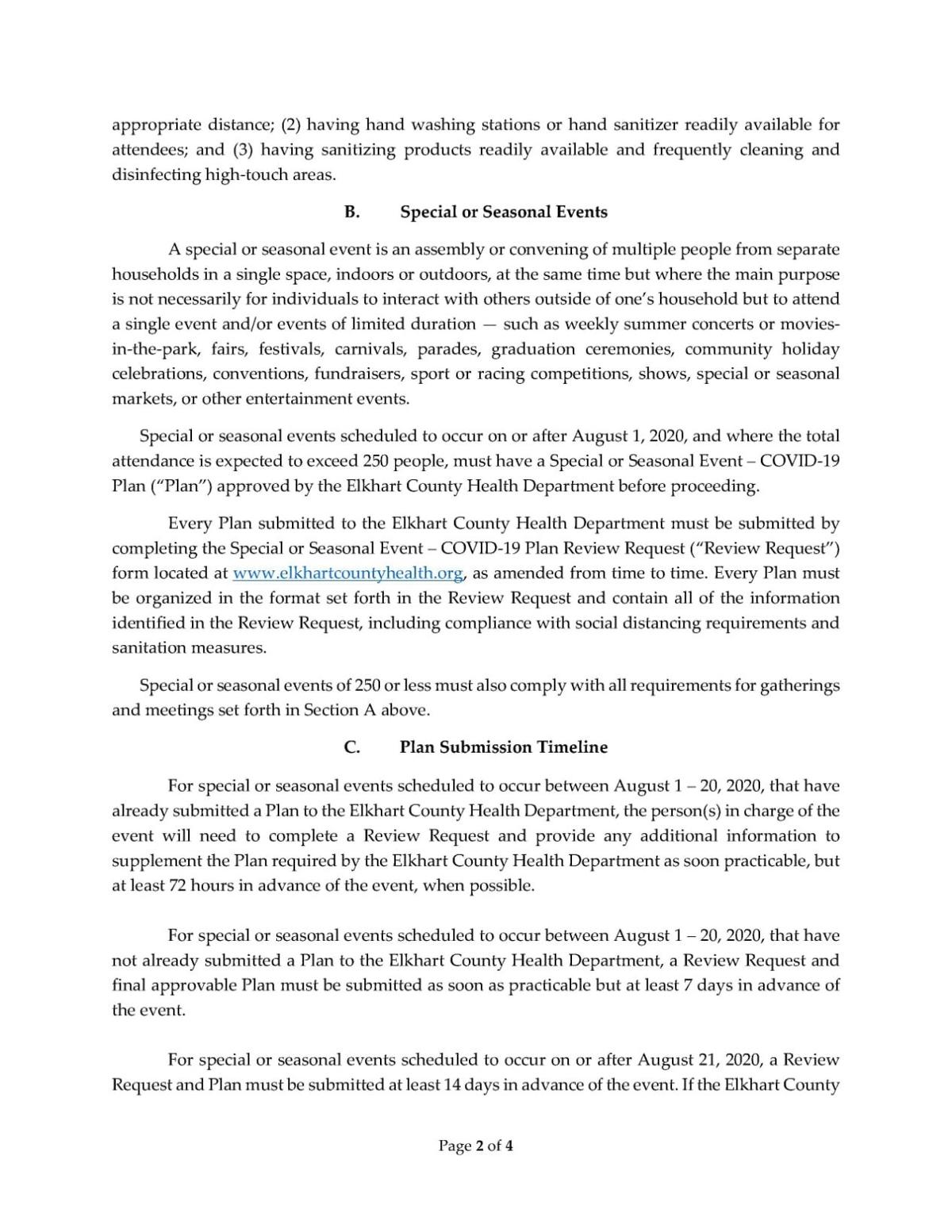 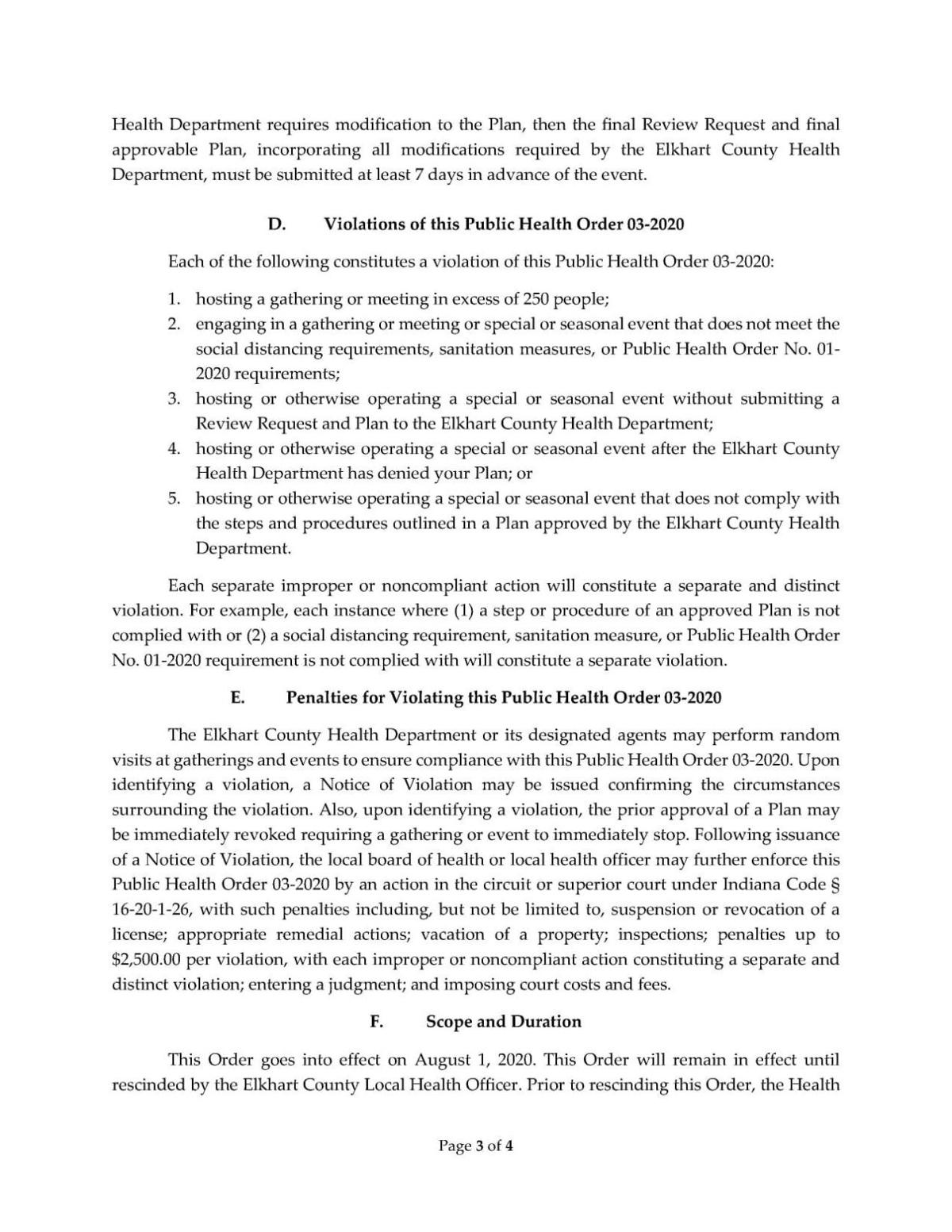 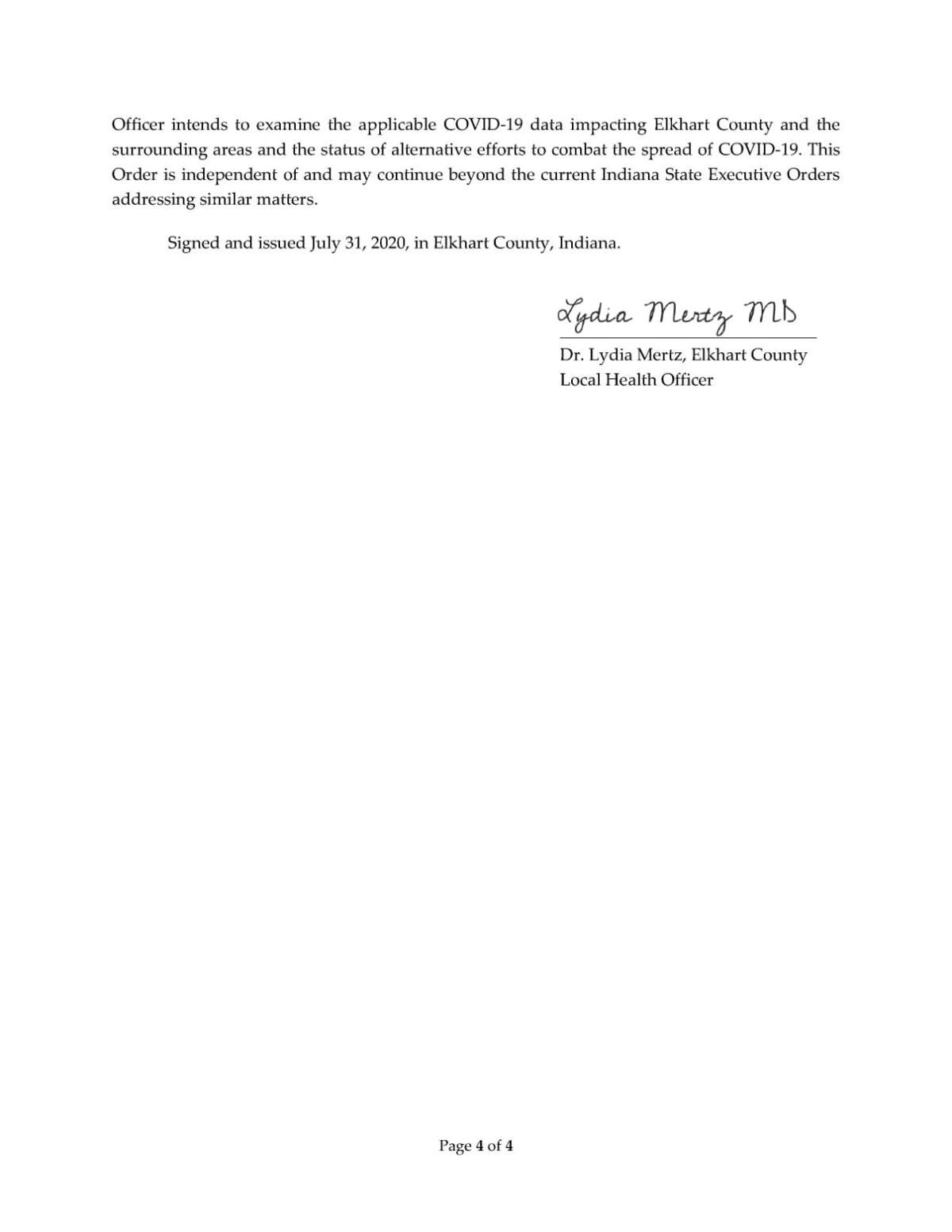 In an announcement released around 7:20 p.m. Friday, Elkhart County Health Officer Lydia Mertz said that while the virus remains in Elkhart County, the county will join the rest of the state in Stage 4.5.

“We have only suppressed its spread,” Mertz said in the announcement. “This was possible because of decreasing positivity rates over the past week. I applaud the citizens who worked together to wear masks in public, distance themselves, use hand hygiene, and stay home when sick.

“Your efforts got us closer to controlling the spread of the SARS-Co-V-2 virus in our county. Our positivity rates have gone from 13.7% to 8.4% recently, allowing us to move toward a bit more openness.”

Mertz also noted in the announcement that if mitigation measures end, an increase in illness will be seen in the county.

“I urge all residents to keep wearing masks in public, use physical distancing, wash your hands often, and stay home when feeling ill. Let us all work together for continued success.”

Under Stage 4.5 of Gov. Eric Holcomb's plan, restaurant dining rooms can open at 75% capacity, and places like zoos, museums, movie theaters and bowling alleys can open at half-capacity. Bars, nightclubs, and tourism sites can operate at 50% capacity.

Here are the numbers reported by ISDH Friday for Thursday:

Just days after public schools around the state reopened their doors for the first time since March, at least one student and one school staff member have tested positive for the virus.

In the Greenfield-Central Community School Corporation, 20 miles east of Indianapolis, a student tested positive for the virus on the first day back to class. Superintendent Harold Olin sent an email to parents of students at Greenfield-Central Junior High School Thursday afternoon notifying them that a student at the school had tested positive for the virus.

“This really does not change our plans,” Olin said of reopening schools. “We knew that we would have a positive case at some point in the fall. We simply did not think it would happen on Day One.”

In response, the school district enacted its “Positive COVID-19 Test Protocol,” which included isolating the student in the school clinic. District and school nurses worked to identify other students or staff who may have come in close contact. Classrooms and areas where the student spent time were also given special cleanings.

Close contacts will have to quarantine for 14 days before returning to school, according to the protocol. Any staff or students who test positive for the coronavirus can return to school only after isolating at home for 10 days and allowing at least 72 hours to pass since showing symptoms.

Greenfield-Central Junior High students who were not in close contact with the student who tested positive were able to continue in-person classes Friday.

At Avon High School just west of Indianapolis, a staff member also tested positive. The district was notified about the case Thursday, one day after students returned to classes, said district spokesperson Stacey Forcey-Moore. However, that staff member has not been at the school this week and did not have close contact with anyone else at the school. The district has not said if the staff member is a teacher.

Avon Community Schools, which was the first districts in Indiana to close after a student tested positive for the coronavirus in March, became one of the first to restart in-person fall classes Wednesday. The district saw 85% of its nearly 10,000 students return for in-person learning.

Greenfield-Central offered students in-person and online options at the start of the new academic year. Only 15% of families, about 600 students, chose to stay home for remote learning.

The Associated Press contributed to this report.