Editor's note: The Elkhart County Commissioners had an emergency session Tuesday morning and amended the enactment date of the civil fines ordinance to Dec. 17. We have changed the article to reflect that.

GOSHEN — In a last-ditch effort to get people to comply with public health ordinances to slow the spread of the novel coronavirus, the Elkhart County Commissioners Monday morning passed a public health ordinance establishing incremental fine structures for repeated violations. The order will go into effect Dec. 17, following two weeks of publication.

The commissioners also immediately closed the Elkhart County Administration Building and the Elkhart County Public Services Building to the public. Both buildings are in Goshen. Business will be conducted by appointment only. Other county building administrators will post their admittance policies, and the courts will continue with their own restrictions. 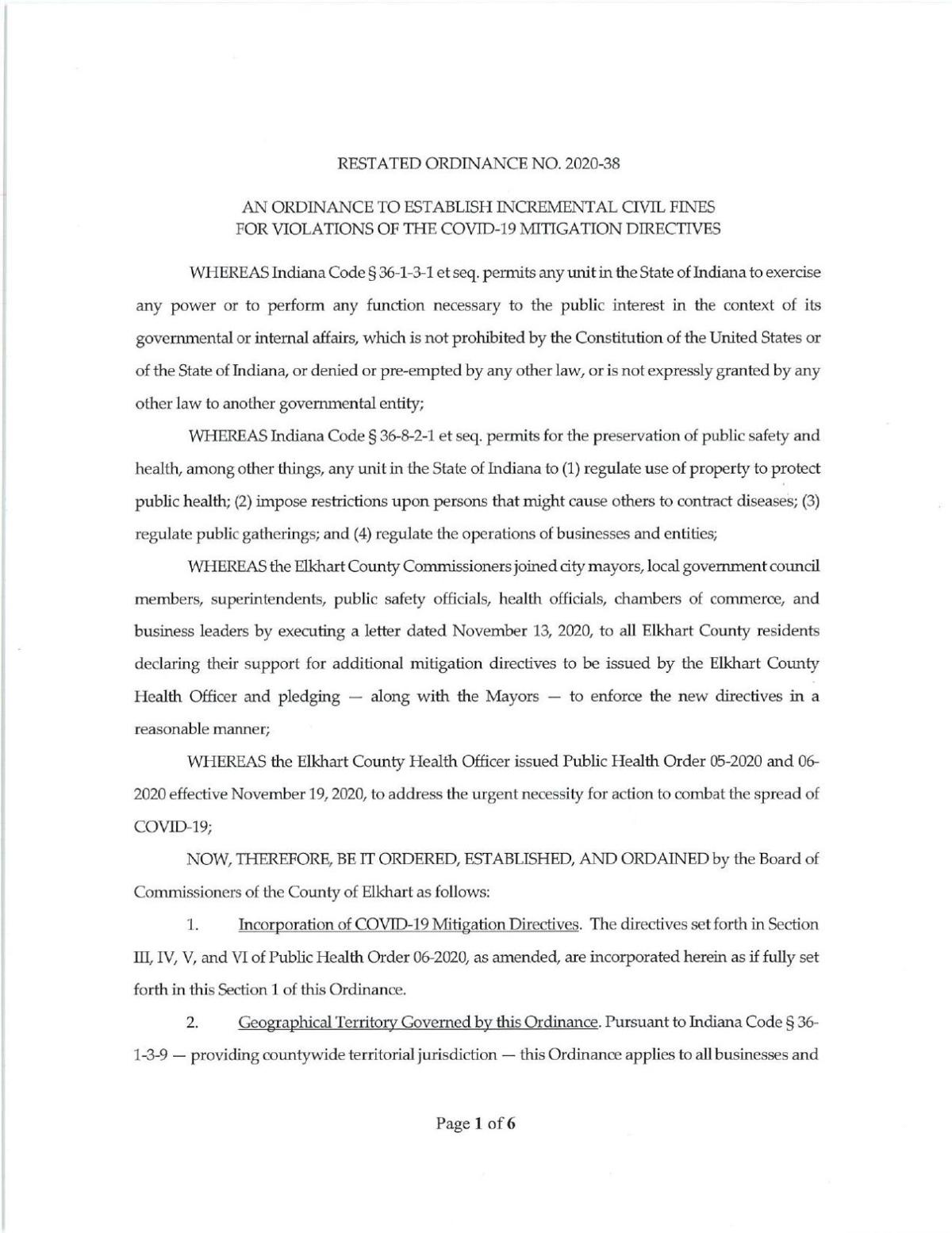 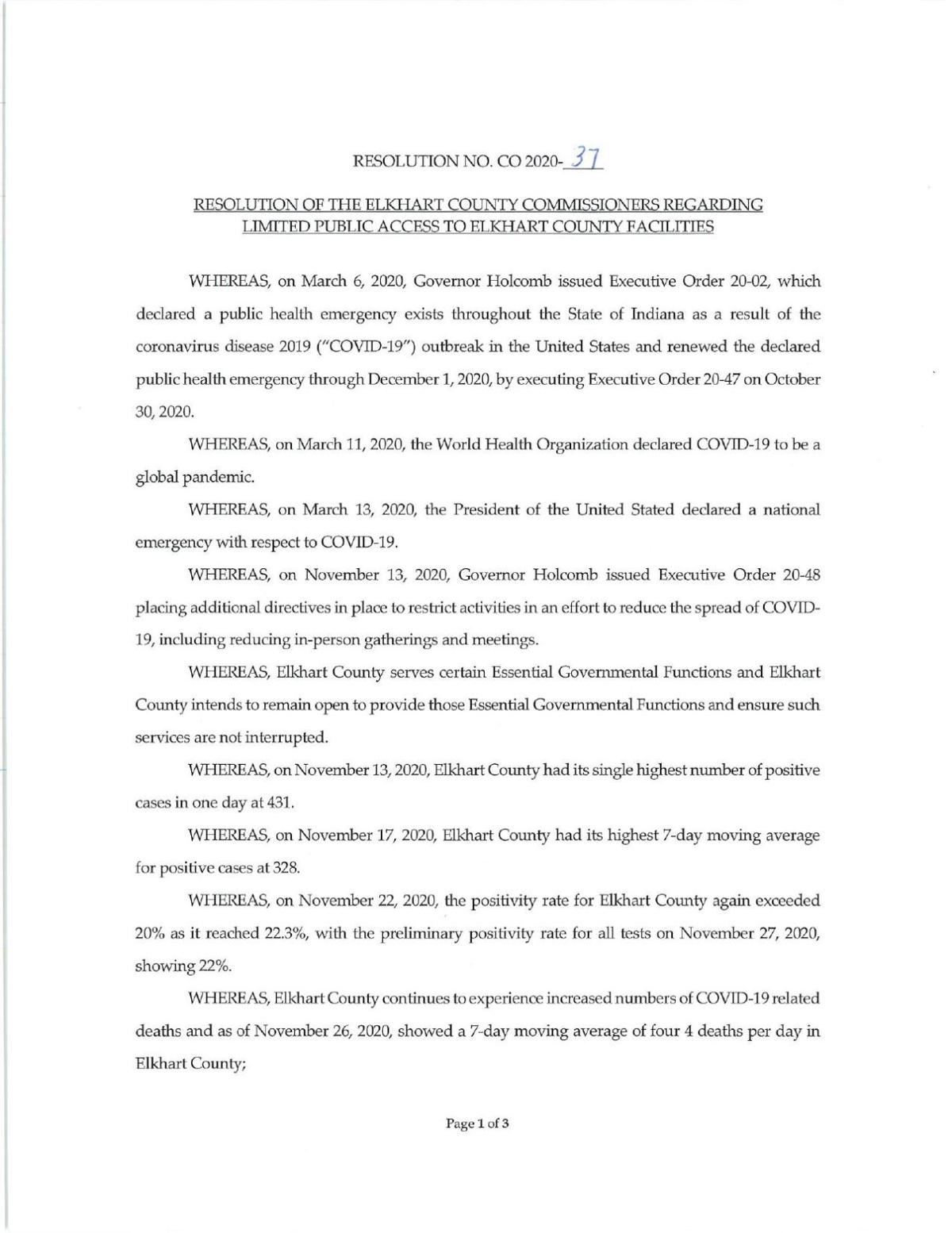 “My perception is that the most critical activity that is taking on the community that’s creating this overburden at our hospitals is the large gatherings that is going on,” Commissioner Mike Yoder said, adding that this is a last-ditch effort on the part of the commissioners and the health department to get people to comply with the health order and slow the spread of COVID-19.

Commissioner Suzanne Weirick said, “None of us came to this spot lightly. If we had thought there was any other way, we wouldn’t be considering this ordinance.”

She said people have ignored the county health orders and as a result the community has been impacted heavily by COVID.

This weekend, the county activated a refrigerated truck to help store bodies, she said. Goshen Health officials said Monday that its COVID patient count has dropped to 39, but that the positivity rate for those being tested for the virus has risen to 16.1%. The county has been placed in the "red" category by state officials, meaning there is a high incidence of the virus in the county.

Weirick said she hopes people realize that masks work, distance works and sanitation works. As for masks, she said they should be a two-ply cloth mask and not a gaiter nor a face shield. “I don’t know how to stress that enough anymore. This has been a long process; a lot of thought has gone into this.”

To clarify, the commissioners did not impose any new restrictions today. What passed was a fine structure to put weight behind the restrictions currently enacted.

Elkhart County attorney Steven Olsen said that this is a countywide ordinance and that the cities’ mayors have agreed to pursue them within their city limits.

First violations will result in a written warning.

A second violation will lead to a fine. If it is found that violations continue, an incremental fine structure for specific violations will be used to fine the violator. The maximum cumulative fine will be $2,500.

As an example, if a business fails to post signs at entrances about masks needing to be worn, that would be a $50 fine.

For third and subsequent violations, there is a similar incremental fine structure with fines doubled and not to exceed $5,000 in total.

Olsen said, “Under the ordinance there are a number of statutory powers that the health department or others that are doing enforcement have a right to enter buildings. It depends on the type of building, type of institution, business or entity, and then within that there are certain powers that allow those officials to come in and say they would like to perform a health and safety inspection on that facility.”

Doriot asked what if the person who wanted to inspect the facility was denied and told to come back with a warrant?

“It slams in the face of property rights,” Doriot said. “I don’t see why the health department can’t go around and knock on the door and say to the facilities’ manager, ‘These are what we’d like you to do, and are you doing them?’ I guess I just don’t agree with this walking right through somebody’s door and saying, ‘Here we are. We’re going to inspect you.’”

Weirick said she did not think anyone was assuming they would walk through a door without requesting permission to enter “like any normal day.”

“The intention of this still, Blake, is not to enforce our will upon anybody other than to the extent that the public health orders need to be reinforced, just like any other work comp type of issue, and workman’s safety type of issue,” she said. “That’s exactly where this is going. The intention of this is to help people understand first before anybody needs to push to the level of anger and warrants. We are in a dire situation. We have the ability to follow through on a lot of this stuff.”

She said the ordinance will allow business to work hand in hand with the health department to be stronger together.

Commissioner Frank Lucchese added that people in the local restaurant community are looking forward to this ordinance, “because they’re dealing with a lot with customers who will not put their mask on. They want to use this ordinance to maybe make us the bad guy, so they can enforce that.”

Local company officials are also looking forward to the ordinance so they can talk to their employees who are not following the rules and tell them they want to remain open, so they need to comply with the rules, Lucchese said.

“So, hopefully it’s a deterrent more than anything,” he added.

Doriot asked about a public hearing on the ordinance.

Yoder said that the commissioners gave the public plenty of time to do what’s right, “and it’s just not happening.”

The commissioners unanimously approved the ordinance.

Concerning the closing of county offices, that resolution was also approved unanimously and went into effect immediately.

In another matter, the commissioners approved the appropriations for the prosecutor’s fund of forfeitures and claims. About 99% of this money comes from seized funds, Elkhart County Prosecutor Vicki Becker explained. The funds can be used for any purpose agreed upon by the prosecutor and the county executive. Most of the money is used for law enforcement support, training and special travel such as officers getting a deposition from a witness. But Becker did want to use a portion for a meal to thank employees.

The funds were approved unanimously.

UHRICHSVILLE [mdash] A 1969 graduate of Goshen HS, she is survived locally by siblings, Genevive (Jesse) Kehr and Daniel Miller. Her funeral was Jan. 18 in Dennison, Ohio. A full obituary is available at www.lindseyfh.com. Arrangements by R.K. Lindsey F.H. 740-922-1970