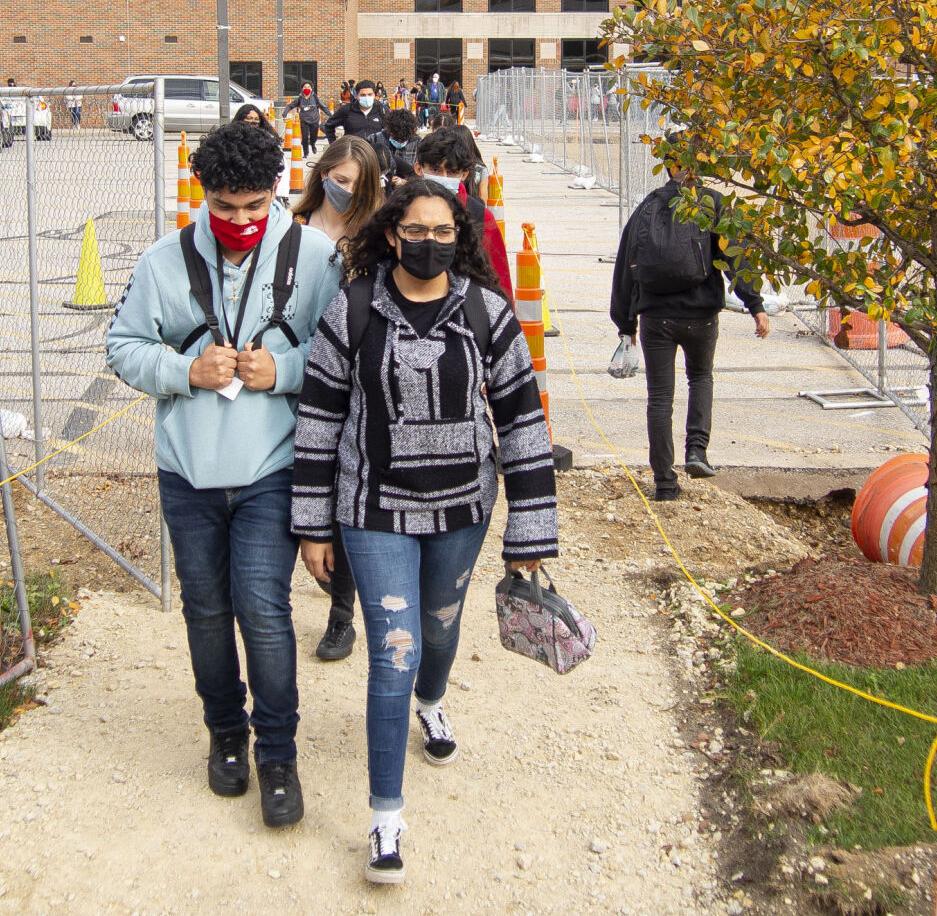 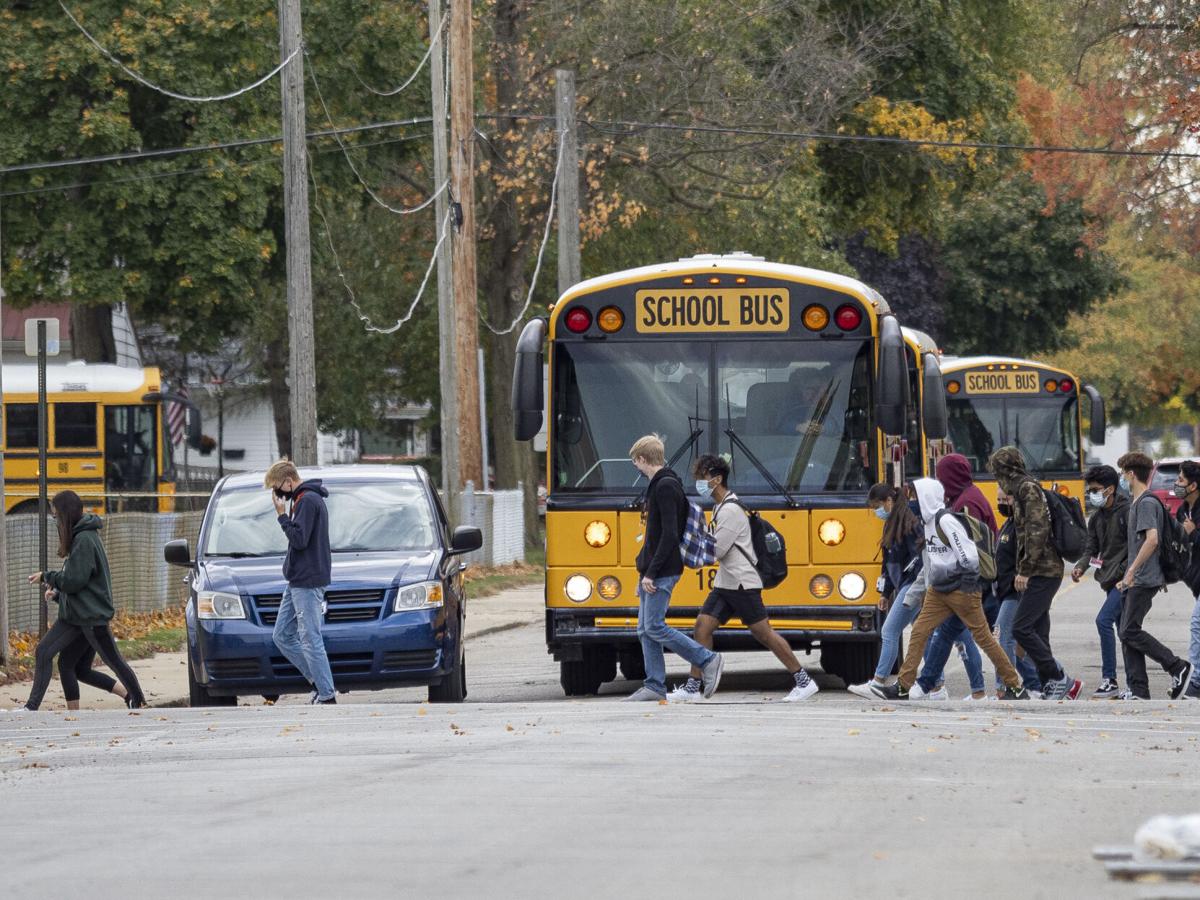 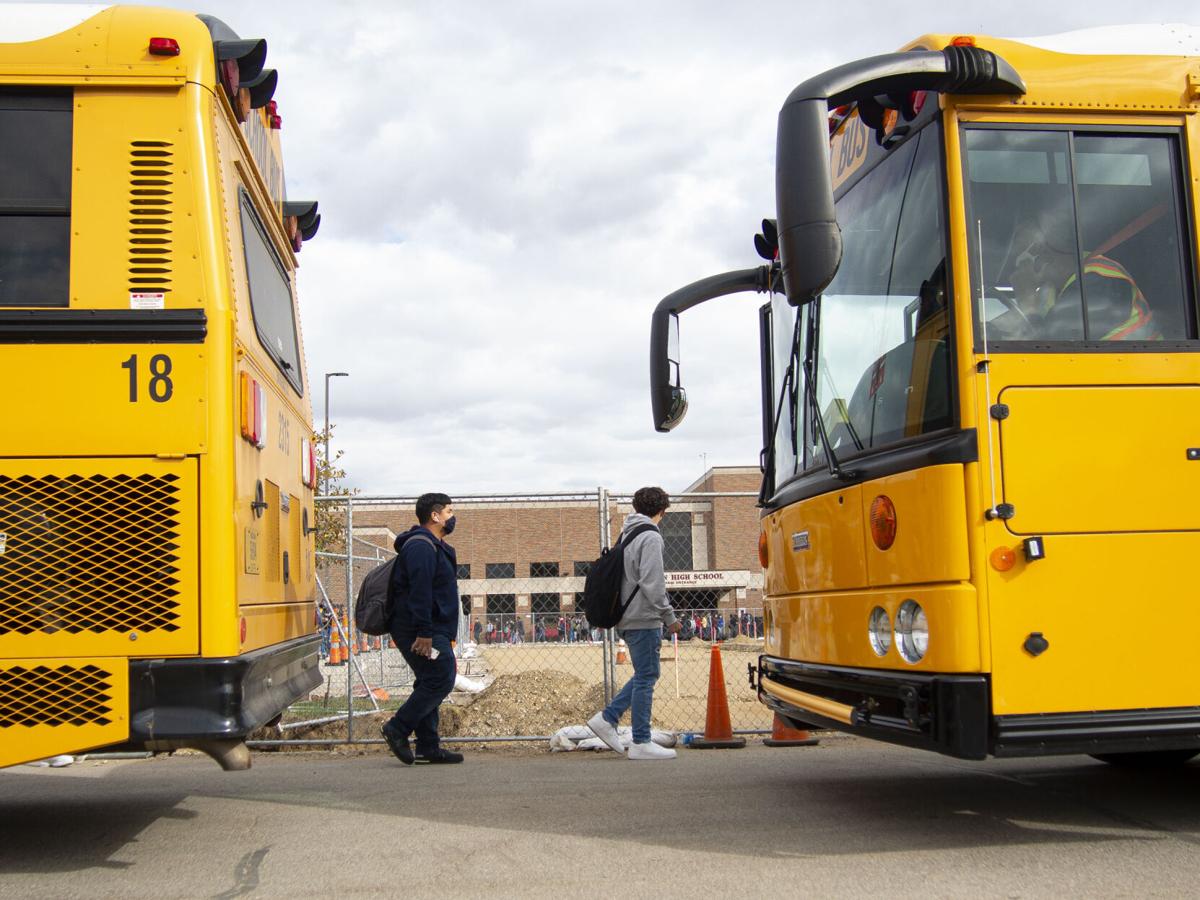 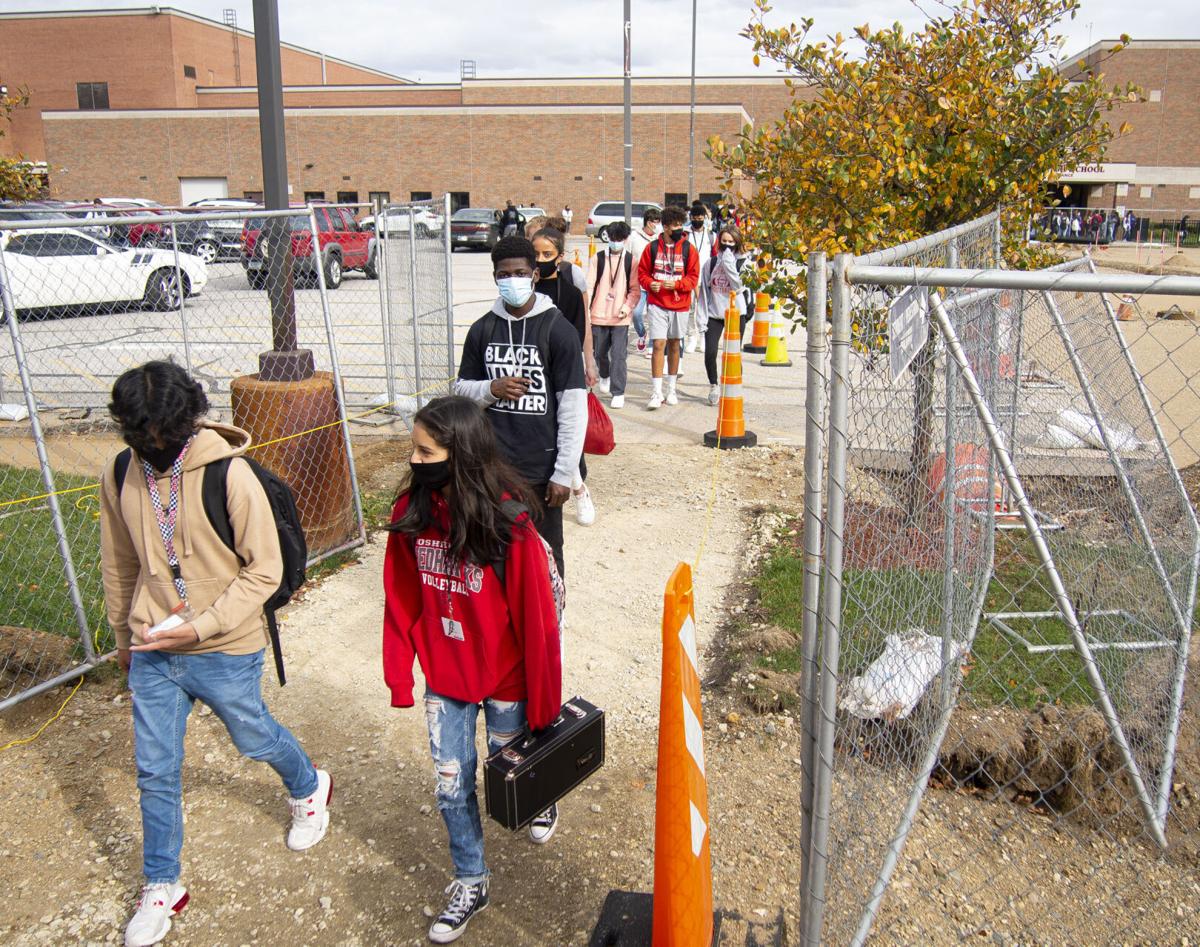 GOSHEN — One of the challenges of this school year because of novel coronavirus activity has been navigating attendance.

Each day, students and their parents are to do a self-health evaluation and determine whether they are fit for school.

At least at Goshen Schools, there is even an agreement signed by families with the schools to do this check.

For families who are doing online school only, that is not needed. But online school presents its own set of issues with attendance.

The RedHawks Online Academy has just less than 1,000 students enrolled, a drop of about 200 from the beginning of the school year, according to Goshen Schools Assistant Superintendent Alan Metcalfe. The reduction has mainly been due to elementary school students returning to in-person school.

There were 740 elementary-age students online and now they are down to 560.

“Part of the reason for the drop is parents didn’t realize how involved they would have to be, especially at the younger grade; virtual learning is not easy for students or for teachers,” Metcalfe said.

There also hasn’t been a large outbreak at the schools, which he thinks has also given some reassurance to parents.

Metcalfe explained that online school happens from 8 a.m. to 1:30 p.m.

Students in the lower grades are taught how to set a timer on their iPad, which will let them know when their break is over.

“That being said not everyone gets back on at the same time or at all. So, we have seen some … we don’t like to necessarily call it attendance as much as participation,” Metcalfe said. “That also being said, we’ve had students that have signed up for our online teaching and have not attended regularly — have not signed in and/or participated in regularly.”

“I’ve already had some of those with students who have not been participating,” he said, noting there were about 10 of them. “They might be logged on but not participating, or they haven’t logged on at all. During those meetings, we tried to make it very clear up front that our expectations were not going to be like they were last spring. This is school and we’re trying to run it as much like school as possible. We talk to the parent about what’s keeping their students from participating or being successful. We make a plan. If it doesn’t continue then their choice is we either remove them from the online academy piece and they come back to our school.”

Goshen has also used Indiana Department of Child Services when staff have not been able to get a hold of parents and students.

“Sometimes they’re helpful and sometimes they’re not,” he said. “But we let parents know during that meeting that could be an option. So, we’re trying to take it pretty seriously, but it is — I think some people thought it would be like it was in the spring where you log on and as long as you participate, you’re going to pass. Well, that’s not the case with our online academy, and we’re very clear with parents that if we don’t have enough evidence that students have mastered their grade-level standards, retention could also be a possibility.”

Goshen’s principals and teachers are being proactive about reaching out to these parents and having conversations with them about how their students are doing, Metcalfe said.

“The one thing about the online piece is because the parents are so involved, they’re pretty up to date on what their student’s ability is,” he said. “The communication with those teachers is probably even greater than the communication that happens from a student who’s at school.”

As for students who are in a school building, Metcalfe said Goshen is experiencing a higher absentee rate this year.

“The state even came in and gave us codes for absentees that are COVID related, absentees that are attendance virtual,” he said. “Even the state kind of revised some of its attendance codes to take the COVID pandemic into consideration. So yeah, we are seeing some increased absences. We always have absences, and we always have kids who are continually absent, who are the ones I normally deal with, and those families. The ones who I have dealt with in the past or the ones who were continually absent, continue to be absent.

“We’re just having a lot more kids who get the call, they woke up with the cough and a stomach ache. So whereas in the past they might send them, parents are being much more careful about sending them, which we appreciate.”

“What we’ve tried to do, you know, because we were online last spring, like when a student is absent or a student is going to be absent for a couple of days or they’re in quarantine, the classroom teacher can do some online education with those kids to keep them moving forward,” Metcalfe said. “So even though they might have to be gone for 10 days, or in the worst-case scenario we had a student who had to be out for 24 days, they have their iPads at home, the teacher worked really well with trying to get those lessons. Because if a student were absent like that any other year, we probably would have packets of work the parent had to pick up. Now we’re able to sometime even involve those kids in the classroom during the day.”

And although students can participate from home if needed, Metcalfe said that school officials encourage students who are sick and don’t feel well to just rest. They don’t want students pushing themselves and to make the illness worse.

“Contact a teacher, let us know what’s going on — parents and students at the secondary level — and arrange to get that work made up,” Metcalfe said. “It might be that day, it might be over the course of the next couple of days, but it’s pretty important that we try to keep these kids … attendance is probably going to be worse this year. We anticipate that. Our goal is to keep every kid, every student, moving forward so that at the end of the grading level they are able to show mastery of the standard that we’re expecting.”

At Wawasee Schools, absences for online school are nearly double what they are for in-person school.

Wawasee Superintendent Tom Edington said that “after examining the academic and attendance data associated with our virtual learning program, we are realizing that virtual learners simply aren’t performing as well as in-person learners.

“Academic progress is being impacted, and unexcused absences are nearly double for virtual learners as they are for in-person students. Couple that with high levels of disengagement from a significant percentage of our virtual learner population, and we are worried that this is compounding problems that have been realized during the previous and current school years. We feel strongly that we can best serve students when they are in our classrooms, and we believe that in-person learning is the best learning environment for our kindergarten through eighth-grade students.”

The school board approved ending online education for students in K-8 recently based on their findings beginning Nov. 10. High school students will continue as normal for the time being.

“I believe parents are aware of the symptoms of COVID-19 and are working with us to help keep all children safe,” he said.

Online students, Evans believes, are for the most part engaged and attendance for distance learners is comparable to in-person learners.

Distance learners are counted present if they interact with their lessons. This is measured in a variety of ways (completion of work, attendance in virtual conferences with the teacher, emailing the teacher, etc.), he explained.

If a student is struggling with distance learning, there is communication with the parent to either bring the student back or develop a plan for student success, Evans said.

If a student is considered truant, then the reporting for distance learners is the same as in-person learners.

And if parents feel that online learning is not benefitting their student, they can send their student back to in-person school without a waiting period.

“We believe the best place for student learning is in our schools,” Evans said.

Wa-Nee Superintendent Scot Croner said, “We have observed an uptick in absences this year, but (frankly) we are glad this is occurring. We have worked closely with our families and encouraged them to remain home if their students are demonstrating symptoms. Thus, we have been very liberal in our application of habitual truancy as we want families to take the extra precautions and remain home if symptomatic.”

“School administrators are monitoring virtual attendance daily and if students are absent then administrators or counselors are reaching out to problem solve with the family,” Wagner said. “We are able to offer mobile WiFi hotspots if internet access is the issue and where other barriers exist, school personnel seek to find solutions. If virtual learning is not a good fit for a student, then the administrator may work with the student and his or her family to encourage a switch to in-person learning. However, we are not requiring families to make a switch to in-person learning if they desire to keep their students at home at this time.”

Wagner added that when Concord announced its plans to return more fully to in-person beginning this past week, Concord officials told families that they would be able to switch from virtual to in-person or vice versa. The deadline for those requests was Oct. 2. They had approximately 405 students request to return in-person and 72 students request to switch to virtual learning. There are 21 students who are on a waiting list due to class size restrictions.

Please do this at home before leaving for school.

Does your student have:

• Loss of smell or taste, or a change in taste

• Trouble breathing or shortness of breath

• Chills or repeated shaking with chills

If your student has any of the above symptoms without being otherwise explained — stay at home.