GOSHEN — Local courts are clamping down on holding in-person hearings as a response to controlling the spread of COVID-19. The courts, following a new Indiana Supreme Court order, are among those groups taking steps to limit public gatherings and exposure for the next several weeks.

Elkhart County Circuit Court Judge Michael Christofeno filed with the state high court Tuesday a petition that suspends trials temporarily, limits the volume of hearings and essentially calls for an emergency time out on deadlines in court matters.

“We’re doing this, obviously, to stop the spread of the COVID-19 virus,” Christofeno said. “We want to reduce hearings that are held in court that litigants and the public or witnesses would be required to attend.”

The filing covers the Circuit Court, the county’s six superior courts and the three city courts in Goshen, Elkhart and Nappanee, he said.

The LaGrange County courts filed for and received a similar order from the state Supreme Court.

As a result, trials scheduled over the next several weeks will be postponed, while hearings deemed non-essential will be pushed back or adjusted to be held in other ways. That includes phone discussions, which are already common in civil cases, and conferences with appearances via video. Christofeno said he’s been granting requests from attorneys to reset hearings to later dates.

Most criminal matters are considered essential, he said, though arrangements are being made to have as many held remotely as possible. A magistrate can conduct initial hearings with defendants at the jail.

Hearings for criminal cases in Circuit Court won’t be held in that courtroom as usual Thursday at the courthouse in Goshen. They’re moving downstairs to the Superior Court 4 courtroom so jail inmates can attend through a video uplink, Christofeno said. Defendants won’t be transferred to court from the jail.

“For the time being, the sheriff will get out of the transport business,” Christofeno said, recommending families also stay home instead of going to the courthouse.

The courts won’t be closed, but they’re limited to essential and emergency matters. The intent is to limit the volume of people meeting face-to-face in courtroom spaces.

Jury trials set through May 11 will be rescheduled, largely to avoid grouping jurors and potential jurors together during the process. Christofeno said they can’t be kept 6 feet apart from each other or in small groups.

“The public who has to serve as our jurors are not going to want to come to court,” he said.

Suspending trials through May 11 is based on guidance issued by the Centers for Disease Control and Prevention last weekend advising the cancellation or postponement of events for the next eight weeks for gatherings that involve 50 or more people. The next trial in Circuit Court so far won’t be held until at least May 18, Christofeno estimated.

The state Supreme Court issued an order Monday that calls on trial courts statewide to put emergency plans in place to meet calls for social distancing during the COVID-19 outbreak. The order falls under a trial rule, Administrative Rule 17, that was drafted in 2007 to give local courts a route to suspend time limits on cases in the event of disasters or “unanticipated work interruption,” according to a description of the rule.

Anticipating interruptions resulting from the new coronavirus, including an inability to meet legal deadlines, the high court’s order calls on trial court to consider filing for relief under trial rule 17. Measures include not only lifting deadlines, but rescheduling trials and non-essential hearings, suspending new jury orientations or giving jurors a break due to illnesses, and issuing summons instead of bench warrants for defendants who fail to appear for hearing, the order shows. The order also encourages the use of phone and video appearances and includes a provision for court staff to post signs advising citizens not to enter courthouses if they meet health conditions related to COVID-19. 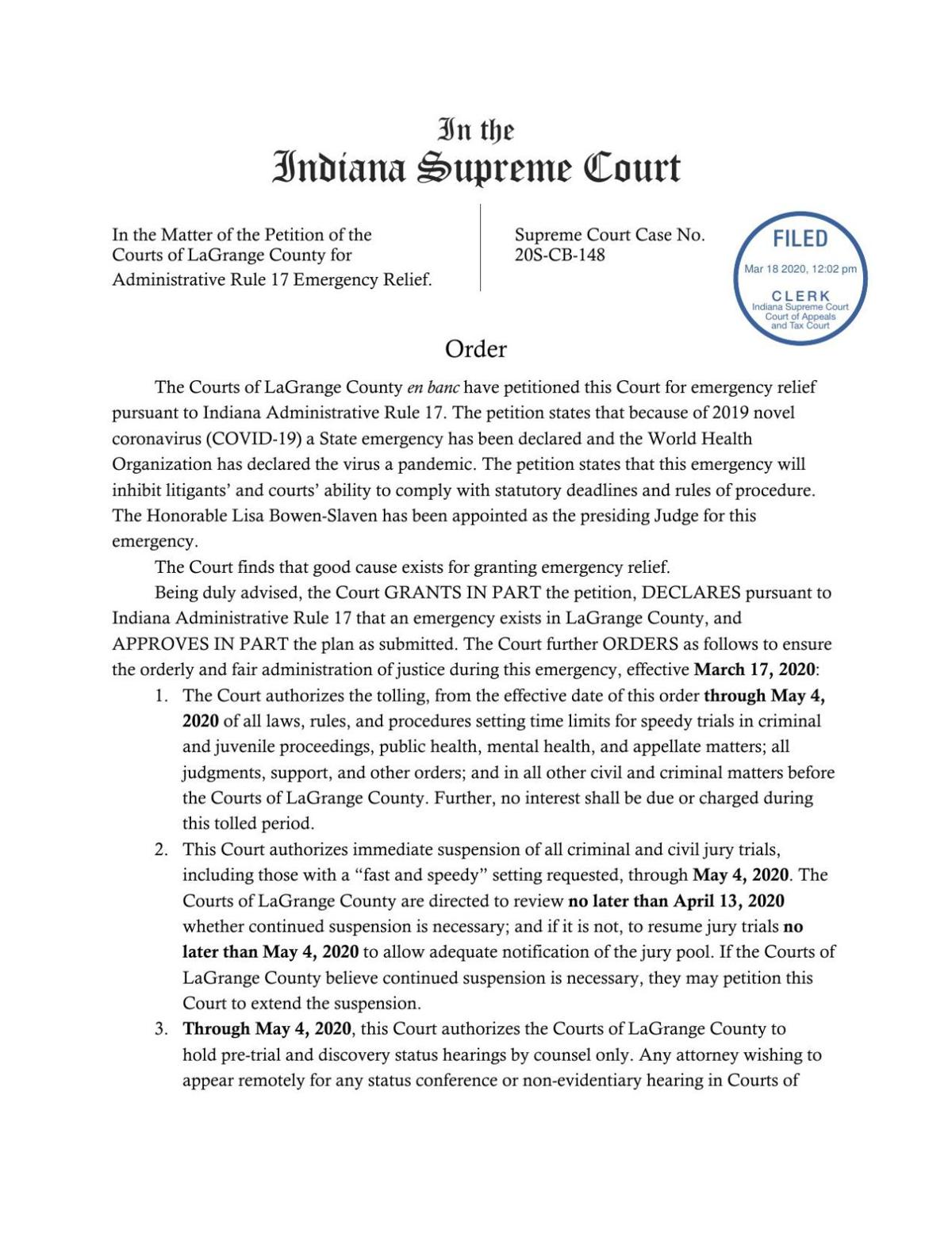 The state Supreme Court granted an order Wednesday for LaGrange County courts to suspend jury trials, including those with “fast and speedy” requests, through May 4, while also giving discretion to limit spectators in courtroom galleries for the sake of social distancing.

Traffic Court in the Goshen City Court was postponed Wednesday until April 15, while non-essential hearings set for Thursday will be rescheduled, an announcement on the city’s website shows. People wanting to take care of traffic tickets without disputing them can call 574-533-9365 for information.

The Elkhart City Court, under trial rule 17, has prohibited spectators from the courtroom, allowing only staff, defendants and attorneys inside, the order shows.

Defendants in misdemeanor cases can seek postponements of approximately two months. Those in traffic infraction cases can request to have them postponed until July — the order doesn’t include a specific date. The order also indicates the court can suspend a defendant’s driver’s license in an operating while intoxicated case or similar offense until the issue’s resolved if there’s probable cause to do so.

Filing the trial rule 17 petition was done with an unanimous agreement by the judges in the county.

“All of the judges in Elkhart County have met and have agreed that we’re going to follow these requirements during this period of time,” Christofeno said.

He also said most attorneys and clients are complying with the move.

Christofeno was still awaiting Chief Justice Loretta Rush’s signature on the order Wednesday. He speculated she was inundated with similar filings from courts throughout the state.

Orders have been issued on court petitions from 20 counties, including LaGrange since Friday, the state’s judicial branch website showed.

GOSHEN — Local judges, sheriffs, attorneys and other stakeholders have started considering letting certain inmates out of jail during the ongo…