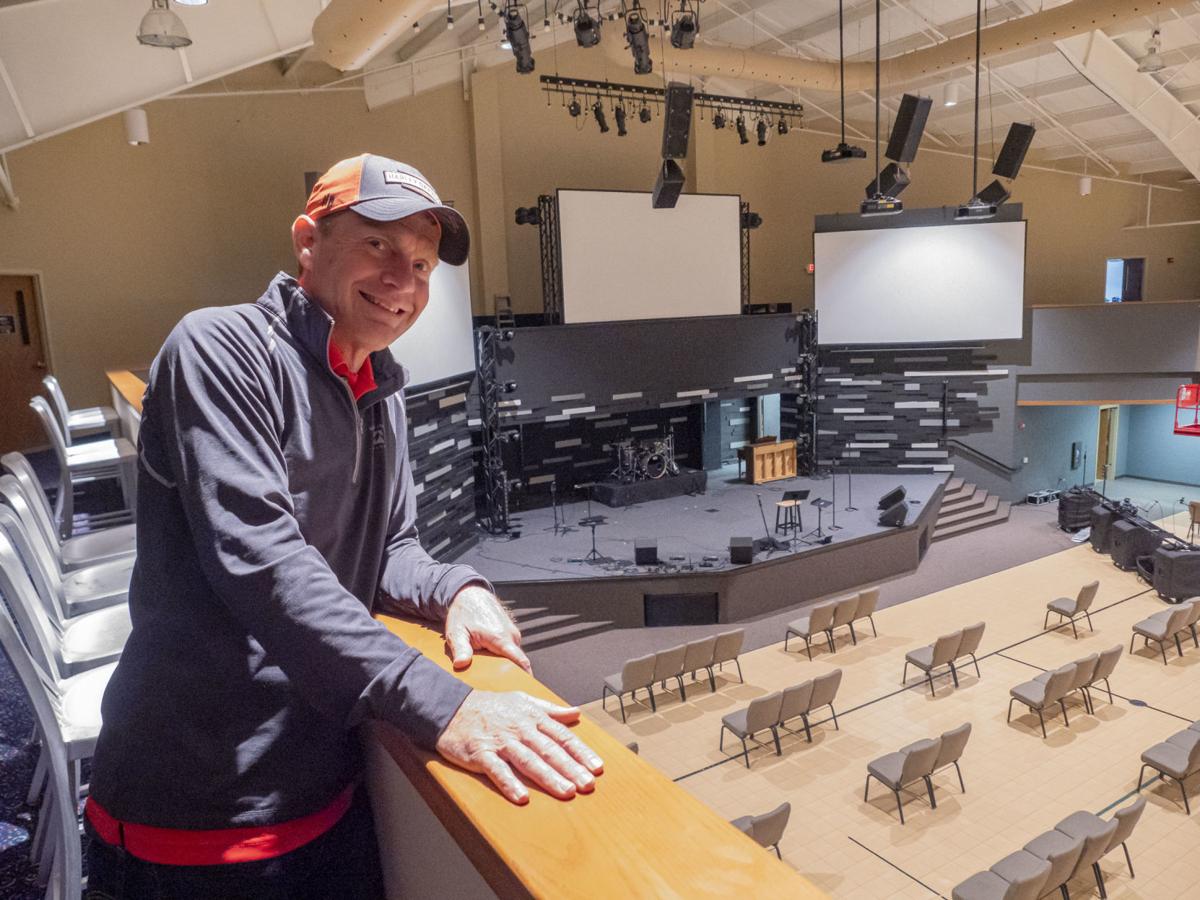 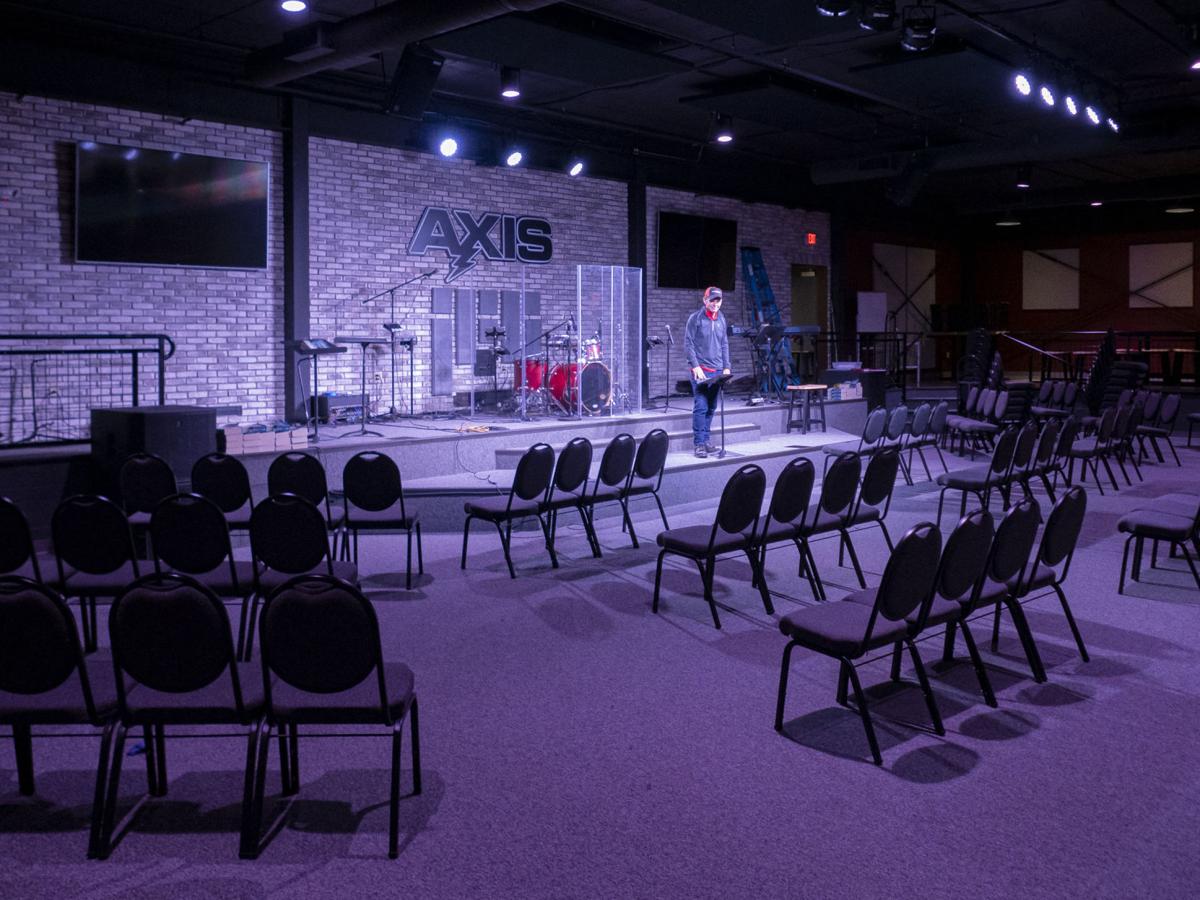 Grace Community Church Lead Pastor Jim Brown shows the seating arrangement in one of four service venues at the church Thursday afternoon that will allow spacing between seats due to CDC guidance on social distancing with the COVID-19 pandemic. 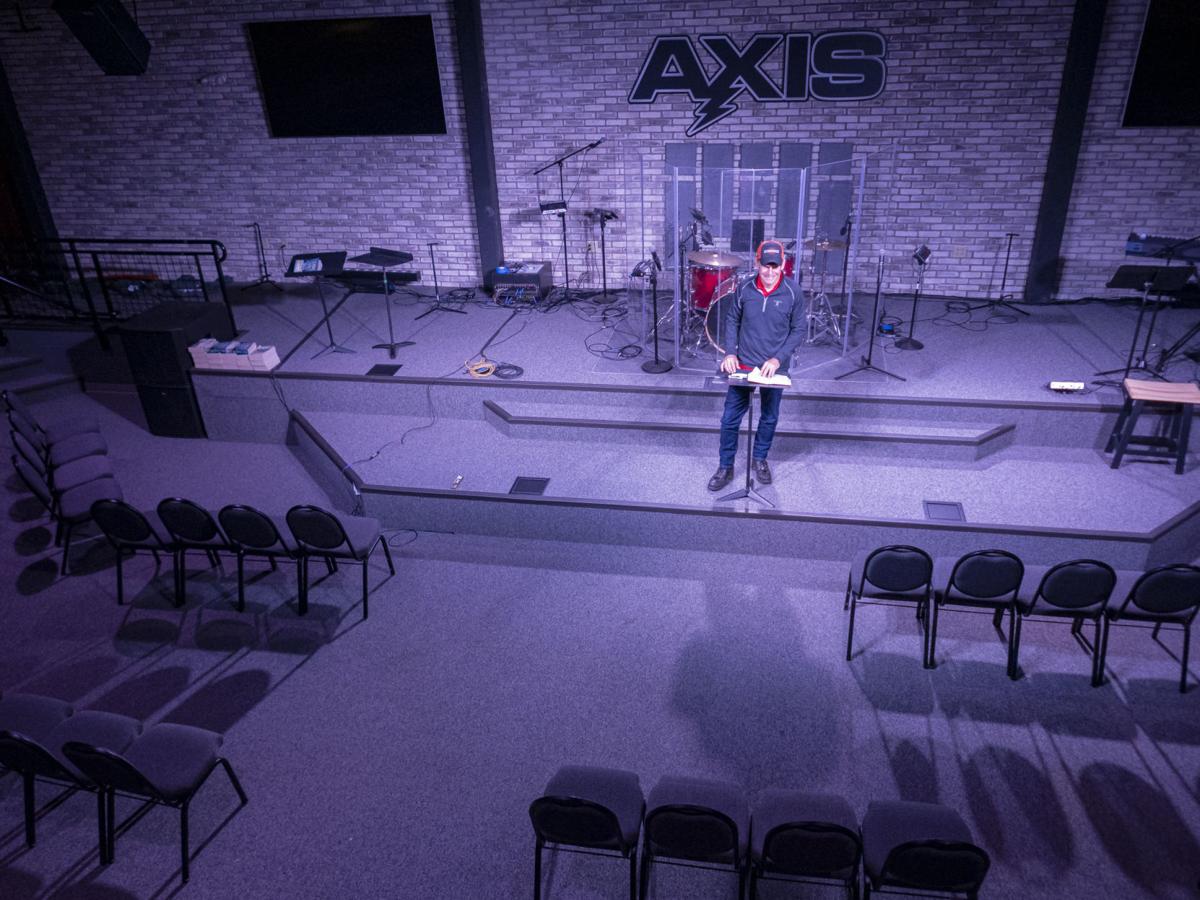 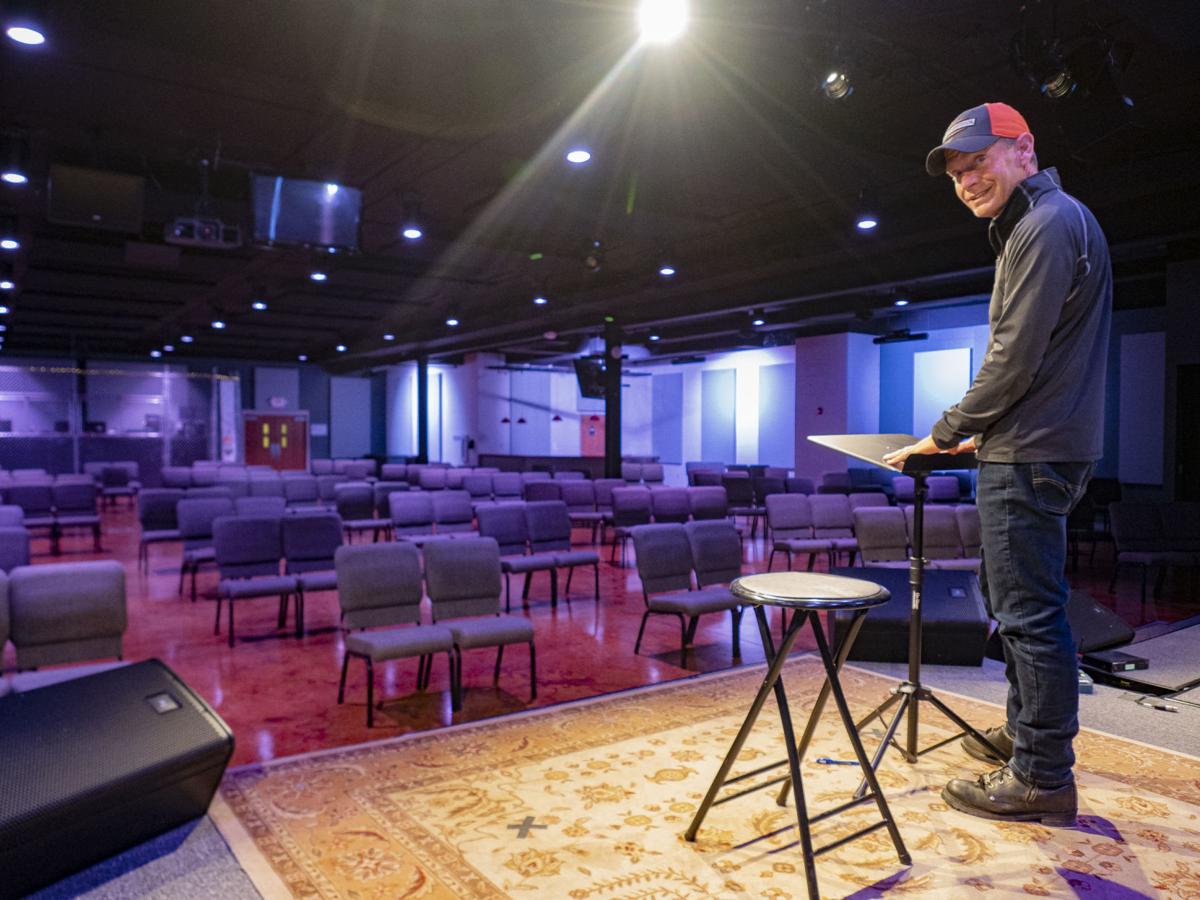 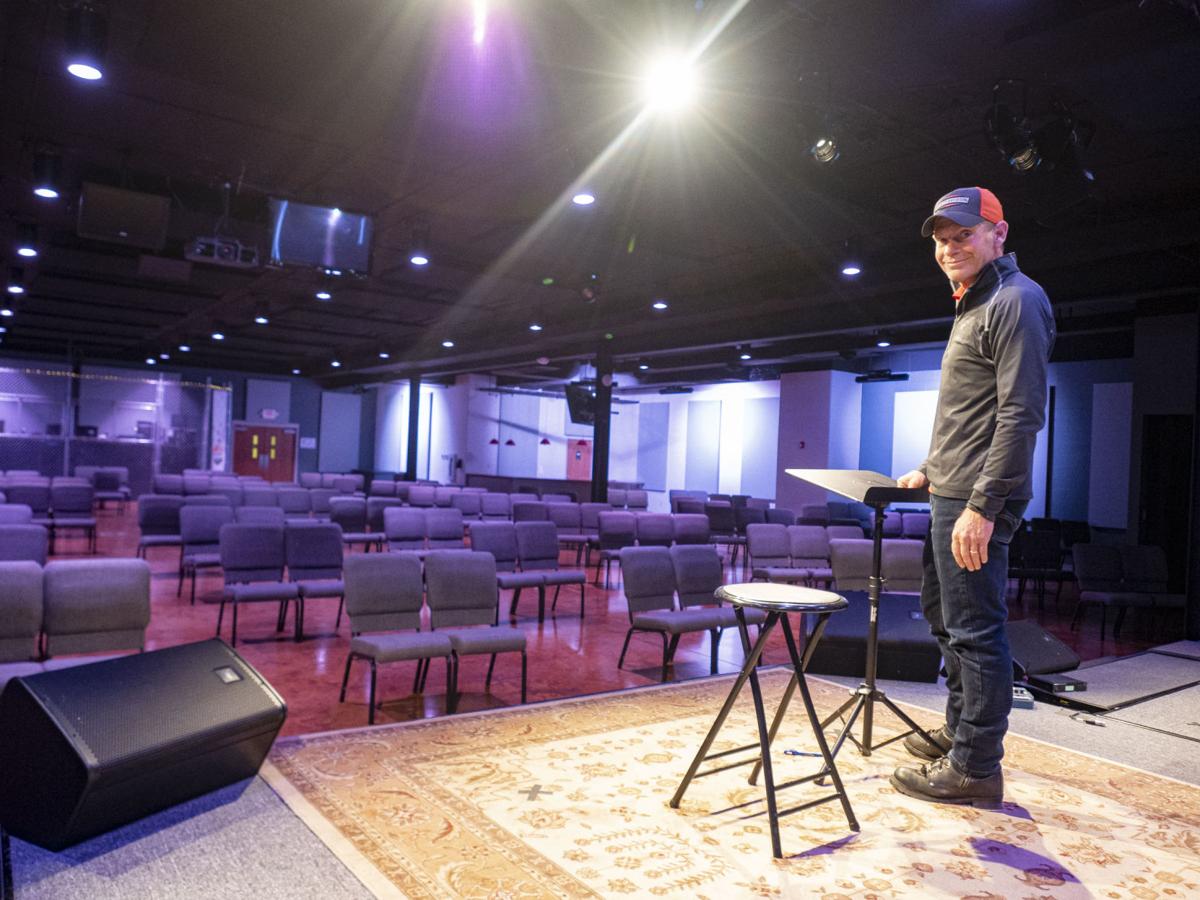 Grace Community Church Lead Pastor Jim Brown shows the seating arrangement in one of four service venues at the church Thursday afternoon that will allow spacing between seats due to CDC guidance on social distancing with the COVID-19 pandemic.

GOSHEN — Church will look different as reopening begins this weekend in Indiana following a more than month-long shutdown.

On April 6, Gov. Eric Holcomb closed churches as part of measures to flatten the curve of the coronavirus pandemic.

That didn’t mean the faithful didn’t “have church.” Online and drive-in services were popular ways church leaders could reach out to congregants and worship together from afar.

Those services will likely stick around for a while, but many Goshen-area churches are ready to open their doors and welcome home the flock.

One of the first ones to open this Mother’s Day weekend will be Grace Community Church, 20076 C.R. 36. As soon as Holcomb made his announcement to reopen the state in stages, church leaders began figuring out ways to safely reopen.

Grace is one of the larger churches in Goshen, with between 2,500 to 3,000 people attending one of three services each Sunday.

Lead Pastor Jim Brown spoke to his congregants during online services last Sunday and explained how church will operate for the near future, including obtaining tickets for weekend services online beginning at 6 p.m. each Wednesday. “We want to avoid turning away people at the door,” he said.

“I’m excited about this,” Brown said in his message. The church will seat approximately 500 people in four venues for each service, allowing about 1,500 people to attend total. Along with the main auditorium, Grace will use its south auditorium (The Link), the high school auditorium and the middle school auditorium.

Those with younger children will be asked to use the high school and middle school auditorium. Children’s ministries will not be up and running until the next two to three weeks.

Others who want to listen to services and still congregate can park in the south parking lot, adhering to six-foot social distancing measures, and tune in on FM radio, Brown said.

To get inside, people need to bring their tickets. Once an auditorium is full, it will be closed off.

Grace has chairs instead of pews, so the chairs can be moved and grouped for families. People who attend will not be shaking hands or standing around talking as normal. “We’re gong to learn to air high-five and air hug,” Brown said. One group will be escorted in after the other group is escorted out. The church has to sanitize between services.

No offering bucket will be passed around. Instead there will be drop spots. No bulletins will be available.

Those who are waiting to come in, Brown said, should wait in or at their vehicles until they are told to come in.

People should take their own coffee, sanitize their hands as they enter the building, and wear masks if they want to — but they do not have to wear masks.

When the children’s area is back up and running, volunteers and children will have their temperatures checked with no-contact thermometers, Brown said. Those areas will also be sanitized between services.

At St. John the Evangelist Catholic Church, 109 W. Monroe St., Father Royce Gregerson received word from the Fort Wayne-South Bend Diocese this week that liturgies can resume, so they are planning on having a full reopening May 23 and 24.

He explained there will be a “soft opening” before then.

“It’s traditional for us to go to confession before communion,” he said.

The staff is working on cleaning and sanitation procedures. “We will be asking everyone to wear masks,” Gregerson said. “We hope to provide them if they need them, but we prefer they bring their own.”

Significant modifications are taking place to the schedule so they can put space between people during Masses, he said.

St. John’s already has six Masses. They will be spacing them out a bit more and adding more Masses. Also, church leaders are looking at simulcasting into its gymnasium with the possibility of people there receiving Holy Communion.

Gregerson said they are looking at the possibility of having some Masses reserved for people older than 65 and for people who have vulnerable conditions.

“We kind of already set communication into effect last week to help people understand it won’t be business as usual,” he said.

Usually St. John’s seats about 400 people and its Masses typically run over or come close to capacity, he said. With social distancing measures, that will take the church down to half of its seating capacity. “We do expect a lot of people will stay home,” the father said.

What the St. John’s staff is still figuring out is singing and music.

“Some data suggests singing could increase the risk of viral spread,” Gregerson said. So for now, those who are at risk will be in services where there will be no singing.

There will be controlled entrances and exits, including releasing people by rows. “We’re used to doing that for communion,” he said. “We’ll just have to leave like that.”

Using a ticketing system like EventBrite is “definitely a possibility we’ve got the door open to,” he said. “But we haven’t decided yet.”

What they could use right now though are volunteers. “We’re recruiting a lot of volunteers,” Gregerson said. They need people to clean, to be ushers or extra helpers. “Many of our volunteers tend to be in the risk category,” he said. “So we’re going to need some of our younger folks to step up.”

For those interested in attending, check the Mass schedule online at www.stjohncatholic.com/

Pastor Tony Tice of Sugar Grove Church said beginning May 24 they will be offering on-site and online services.

“If you are 65 and older or have a medical condition, we are encouraging you to watch online,” he said. “We’re also encouraging that if you are in a small group to gather at each other’s houses and then to discuss and pray afterward. If neither apply, then you can sign up for on-site services.”

Tice said Sugar Grove’s leadership team wants to honor the wishes of the governor and to be good citizens. That means people need to be six feet apart if they are not immediate family.

Typically, Sugar Grove has about 1,500 to 1,600 people attend church Sunday morning. With those social distancing guidelines, Tice said he thinks only about 200 to 250 people can attend per service in the worship center.

“We want to be very careful, very protective of our people and honor our governor,” Tice said. “As a pastor, it’s a balance of stepping out by faith and understanding how important meeting with people, physically being with people is ... And balance that with protecting our people. Not just spiritually but physically too. We felt that was a good balance for us.”

This will continue until July 4 when the governor’s measures are lifted.

The church will also evaluate what to do with the online services.

“We’ve had a great response to it,” Tice said. Before COVID-19, the church did not have the equipment to do online services well. However, that equipment has been ordered.

He thinks online services have the potential to reach those who feel disenfranchised or those who are not going to step foot in a church but still want that connection with God.

“Let’s bring the Gospel to them,” he said, adding that maybe they will connect later.

During this past month of online church, Tice said he noticed the number of views were more than what they would typically see on campus.

“How can we leverage that for the kingdom’s good?” he said, later adding, “What a great opportunity for people to hear the word of God.”

For those who want to attend in-person service, they will need to sign up for it on the church’s app or on its website. It will be on a first-come, first-served basis.

In July, that will end, he said.

He does not think congregants will need to wear masks but, much like Grace, they will not be stopping to chat in the lobby area.

For those interested in attending, information about the church, located at 58512 Old C.R. 17, can be found online at sugargrovechurch.com/.

Also opting for a May 24 start date is First Baptist Church of Goshen, 1011 S. Indiana Ave.

Pastor Gregg Lanzen said, “Due to the size of our church (+/- 250) and the number of susceptible folk in our fellowship, we’ve decided to continue our ‘closed and live-streaming service’ policy until May 24, when we will go to two services: 9 a.m. for 65 and older, 10:30 a.m. for others.”

The church will practice social distancing as encouraged by the governor, limit time in the building before and after services and sanitize the building between services, he said. No children’s ministries will be held. This policy will continue until mid-June when, Lanzen said, they hope to get back to a “new normal.”

For more information about First Baptist, go online to www.fbcgoshen.org/.

Other local churches will be taking similar measures as they head back to in-person services. Many pastors posted plans on websites and social media, so those who are interested in attending should check online first to see what the new plans are.

In-person services are permitted in much of the state beginning May 8, religious services, including wedding ceremonies and funeral services, may continue and will no longer be subject to limits on social gatherings. However, social distancing and other sanitation measures will continue to apply. Wedding receptions and visitations before or after funerals remain subject to the limitations and restrictions for social gatherings, and it is recommended that religious leaders verify local restrictions.

• Clean between each service and regularly disinfect high-contact surfaces

• Recommend putting on a face covering before entering the building

• Consider placing signage telling staff, members and guests to not enter if they are symptomatic or if they tested positive for COVID-19

• Establish safe protocols for any communion and collection to avoid contact

• Dismiss services in a way that supports social distancing

Additional information and resources for COVID-19 are available at the links below. • Back on Track Revised Guidance for Places of Worship: https://backontrack.in.gov/files/BackOnTrackIN_PlacesOfWorship.pdf

• Additional guidance for the faith community from the CDC can be found here: