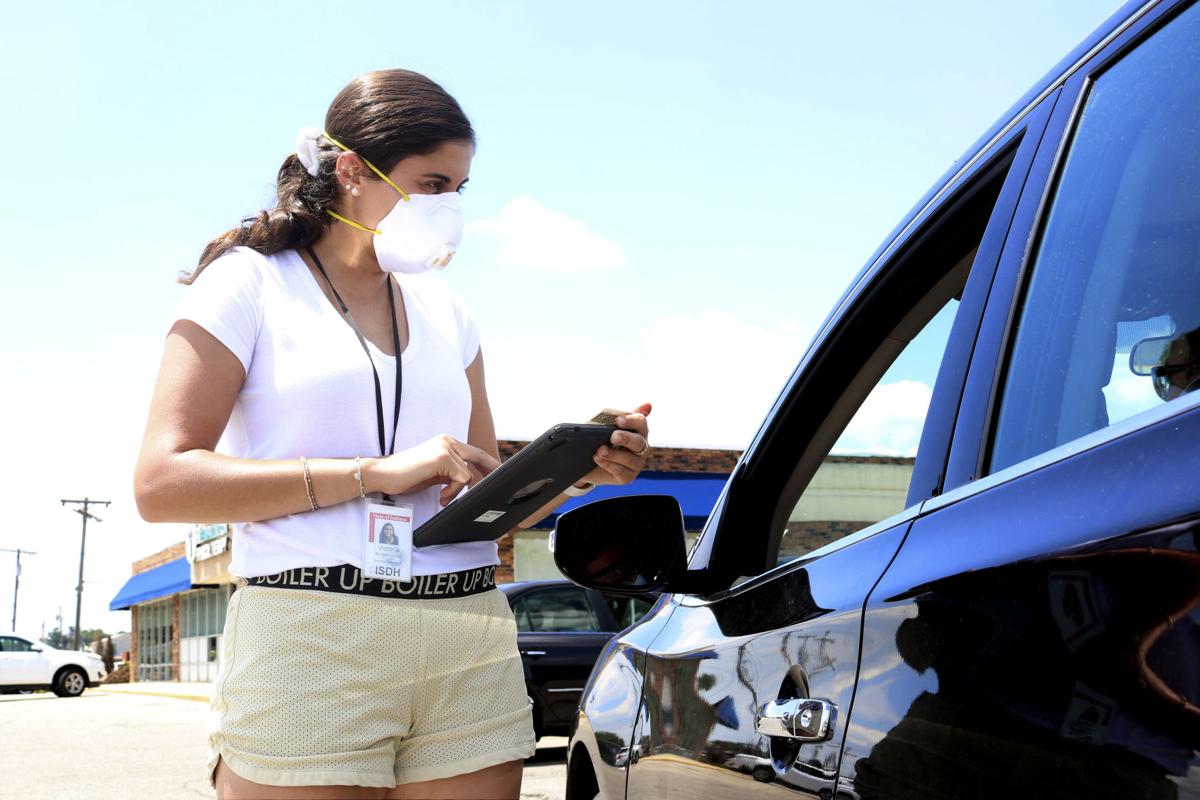 Victoria Konstantinidis with the Indiana Department of Health checks in a person for a coronavirus test Thursday afternoon at Trinity Square Shopping Plaza at the corner of Chicago Avenue and Pike Street. 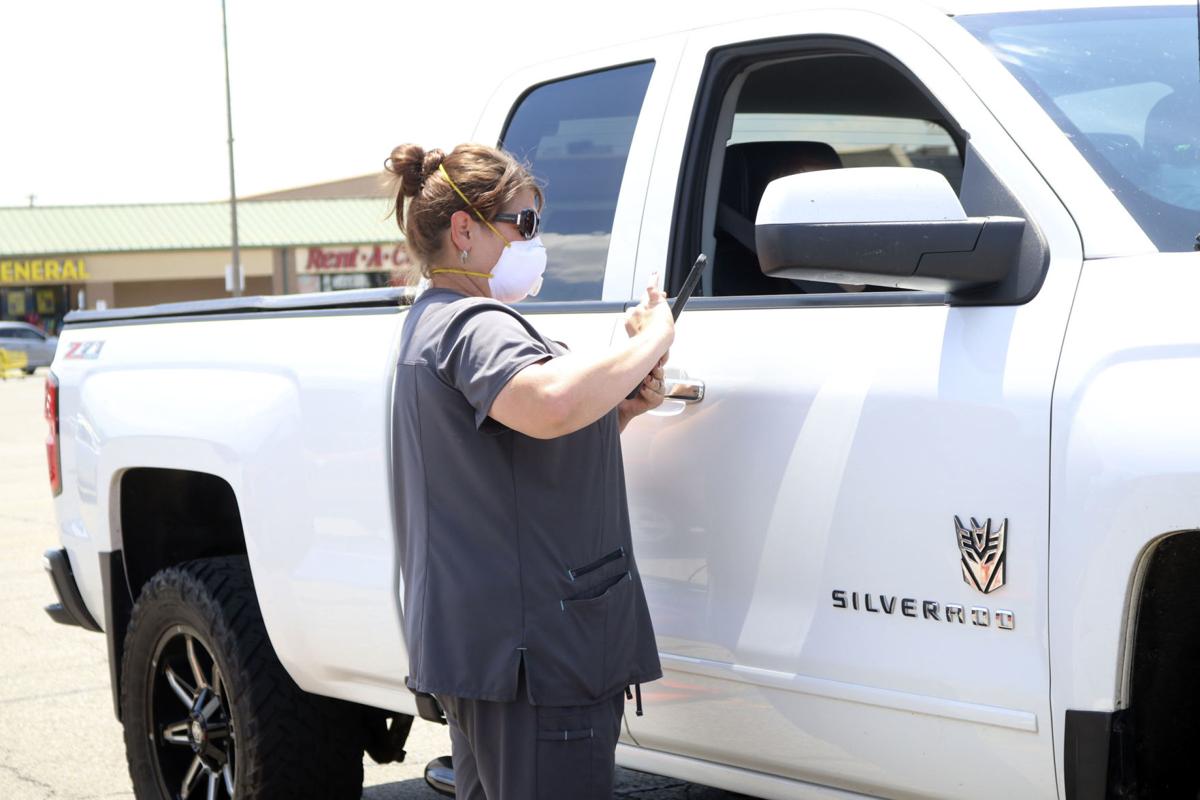 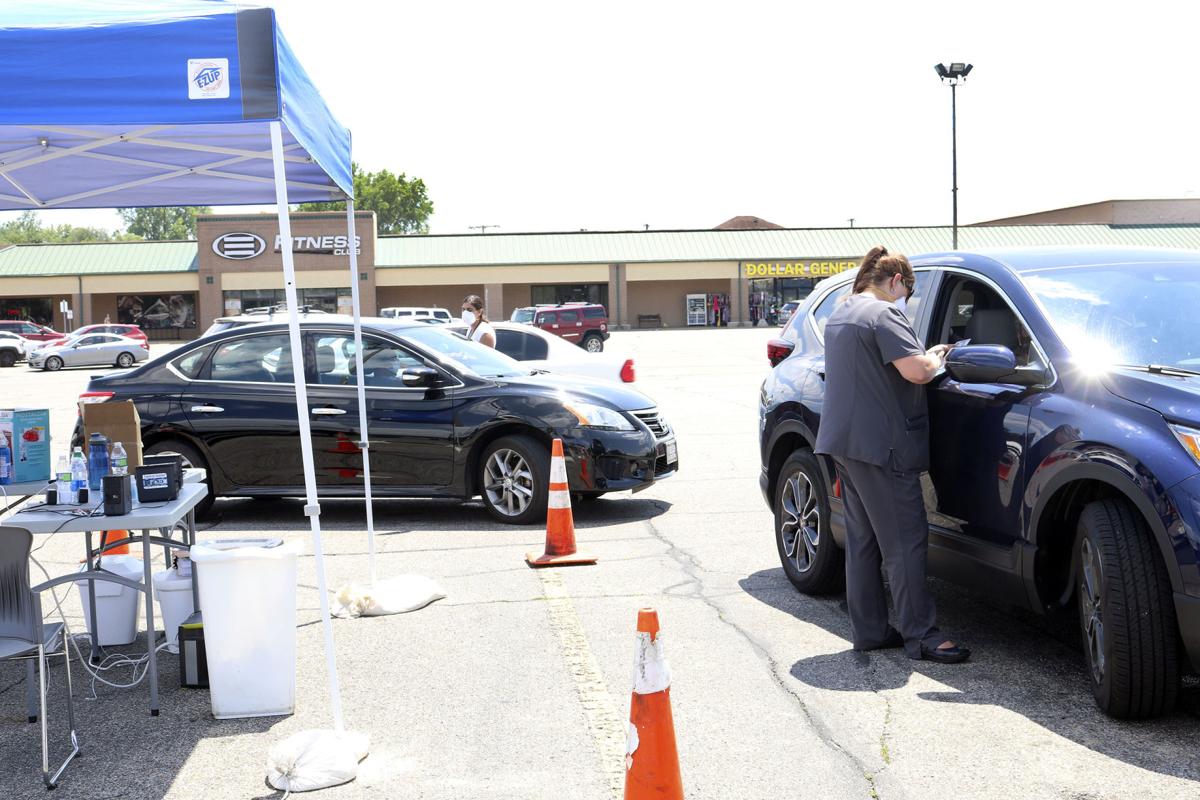 Victoria Konstantinidis with the Indiana Department of Health checks in a person for a coronavirus test Thursday afternoon at Trinity Square Shopping Plaza at the corner of Chicago Avenue and Pike Street.

For more than a month, people working with the Elkhart County Health Department, Latino Pandemic Initiative, Incident Management team and other local leaders have been working toward gaining the trust of people in the Latino, Black and Amish communities. The goal: more testing and education to stem the rising numbers of coronavirus cases in those communities and the county.

But last week, that trust was jeopardized, not through their fault but through an Optum employee, who is accused of discriminating against Latino patients. Optum has apologized for the incident.

According to Elkhart County Latino Pandemic Initiative co-chairman Richard Aguirre, “There was a serious problem.”

There was a nurse working at the OptumServe Model Elementary School site, “who clearly had discriminatory intent toward Latinos.” The testing sites require some identification so they can get back to a person with test results later. This person, though, apparently tried to find out more about a Latino person than what was necessary, Aguirre said.

“She called state police and said there were undocumented people here,” he said, adding that ISP did not dispatch anyone to the site.

ISP Sgt. Ted Bohner talked with Bremen and Toll Road officers on duty, who said as far as they know they did not receive a call. “Even if we were called, it’s not a call of service we would respond to,” Bohner said. “It’s something we would not typically do because we’re not immigration.”

“It shouldn’t have happened,” Aguirre said. “They were assured it would be safe.”

And it wasn’t just this one instance, he added. The same person is accused of making Latinos wait for appointments and test results.

Latinos interacting with government or health care facilities don’t always have things explained to them at times, so that erodes confidence, he said.

It’s one of the reasons the Latino Pandemic Initiative was created — to be advocates and to interact with those agencies who don’t have those relationships.

“We have developed a trust and they will be receptive with what we tell them,” he said. “When things happen like at Model, that really sets us back.”

An email about the incident from the state health department’s Joint Information Center reads: “ISDH was made aware of an issue at the Goshen Optum site regarding how an individual seeking testing was treated and took immediate steps to close the site and address the actions of the staff member with Optum. In addition, ISDH has taken over the testing in Goshen and Dr. Box (Krisin Box, state health commissioner) has met with community leaders to address the concerns over this isolated, but unacceptable, incident.”

Optum’s Aaron Albright apologized to Goshen saying, “We take seriously our responsibility to provide compassionate, quality care to all members of the communities we are privileged to serve, and we are committed to treating every person seeking testing for COVID-19 with respect. We apologize to the community for the unacceptable behavior of an individual recently contracted to support testing in Goshen. We immediately ended our relationship with this person upon learning of their behavior, which was totally inconsistent with our values. Law enforcement was not called upon to report any individual.”

Elkhart County Incident Management Director Jenn Tobey explained she received a call from Melanie Sizemore of the county’s health department about the incident at the Optum site at Model. Sizemore contacted the state and Tobey contacted Goshen Mayor Jeremy Stutsman, Fire Chief Dan Sink and Police Chief Jose Miller. They all agreed to meet at the site.

Stutsman said, “Friday morning when I came into the office, I almost immediately got a phone call from Jenn Tobey. She had a phone call of a rumor of some racial issues happening at this site from the Optum group.”

Stutsman made a couple of other calls and answered calls from local Latino leaders and other city leaders who had also heard rumors of what happened at the site.

“We heard enough that we wanted to get out there right away and talk to the director at this testing site,” he said. So, he, Sink, Miller, Tobey, Sizemore and county Health Officer Dr. Lydia Mertz agreed to meet at Model to do their own fact finding, then make a decision if the claim was legitimate, and the mayor said, they were prepared to kick the group out of Goshen and not have them come back if the rumor was true.

“We talked to the woman for about 25-30 minutes,” Stutsman said. “I had known what I needed to in the first few answers.”

But even prior to the group assembling for the inquiry, state health officials had already ordered the site to be shut down.

“The state had just made the decision to close the site and leave the community,” Stutsman said. “It was solved right away.” The state even arranged for people who were scheduled for testing at Model to have their tests done at another site, he said.

The mayor said he was grateful for the quick action.

“Everybody involved from county and state took this very seriously,” he said. “All were concerned about what we were hearing and put an end to it as soon as possible once we knew.”

He also wanted to make sure the public knows Goshen Schools was in no way involved. Optum was just using the school’s building.

Tobey said their group told the Optum director it was unacceptable. The director and the person who is accused of discrimination are believed to be the same person, Tobey said.

“Our goal is not to pass judgment or get anyone detained,” Tobey said. “Our goal is to get people tested, no matter who they are.”

The state then opened its own testing site with state employees and the National Guard — not Optum employees — in the parking lot of Trinity Square Shopping Plaza, at Chicago Avenue and Pike Street. They also opened a second site at North Side Gym in Elkhart.

“We’ve continued to work with all of our coalitions to apologize for what happened and to reiterate our goal is to test everyone,” Tobey said. “The situation was dealt with and we would like to move forward.”

A positive, she added, is that the state’s new site managed to test more people than Optum. The first day, more than 150 people were tested. The highest Optum had done, Tobey said, was 132. “Right there was a positive and we’re going to focus on the positives.”

Latino Pandemic Initiative co-chairmen Gilberto Perez Jr., who is also a City Council member, was disappointed by what happened with Optum, but applauded the quick action by local and state officials.

Perez said, “At any time when these situations occur, trust always takes a hit. But I would say the rapid response from the city, Mayor Stutsman and the health department have curtailed that to some extent.

“I was very surprised and disappointed that a staff member who is working to care for people in this difficult situation — that they would take that stance — was disappointing.” Perez said he would have hoped that the particular staff member would have understood it’s their responsibility to support a person regardless of status instead of reporting them to police.

And what he hears from the state health department is that a person’s citizenship status should not be a question at testing sites “contrary to what that staff person attempted to do.”

He wanted to reiterate his appreciation for the rapid response of city officials, including the mayor’s office, to call a meeting last Monday with Box, unified command, the leadership of the Latino and Black pandemic initiative groups and health officials to discuss the matter. “It shows the great deal of leadership we have in Elkhart County and that we are a welcoming place,” Perez said. “My deep respect for Mayor Stutsman for taking immediate action on that.”

The Indiana Department of Health is operating a COVID-19 testing site at Trinity Square Shopping Plaza, located at the corner of Chicago Avenue and Pike Street.

According to ISDH site manager and registered nurse Katie Lamoreaux, the site will be open all next week as well from 8 a.m. to 8 p.m.

Testing is free, no appointment is required and people do not need to have symptoms to be tested.