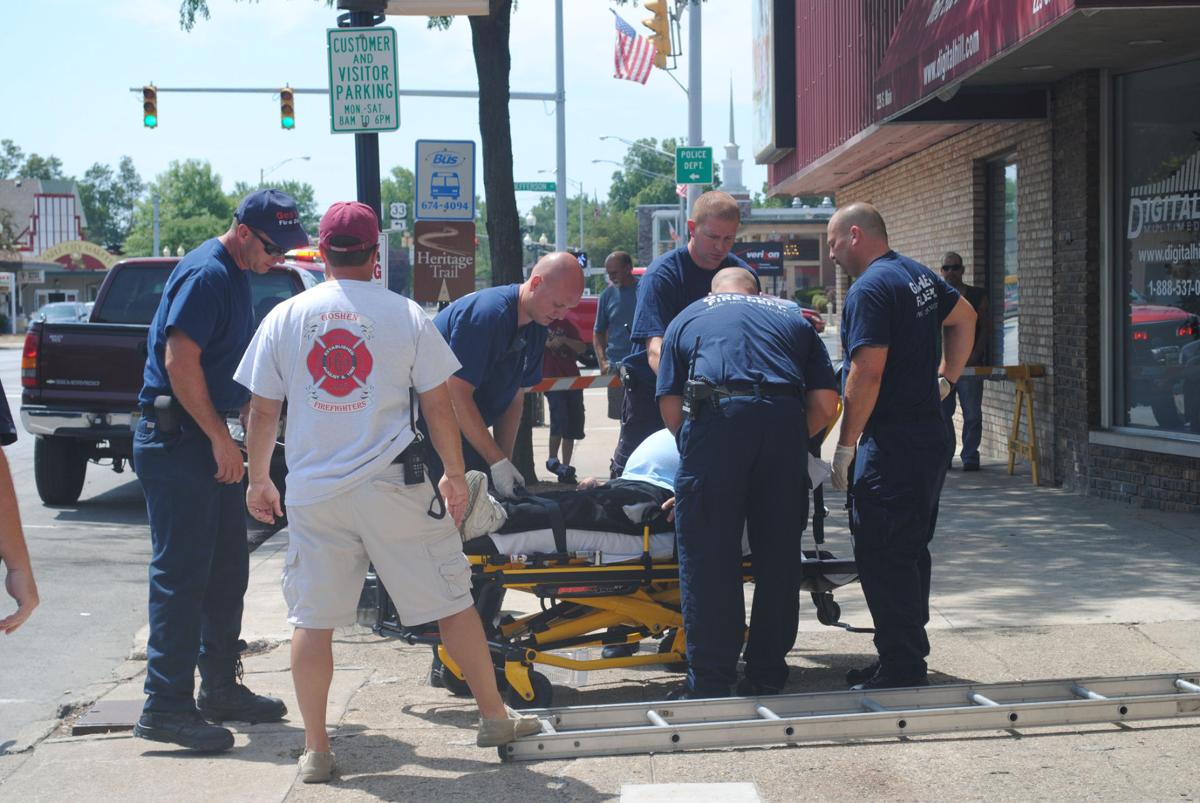 Goshen paramedics and firefighters help a man onto a stretcher outside the Dew Drop Inn in this July 21, 2012, file photo. The man fell when the sidewalk gave way underneath him in front of the establishment. 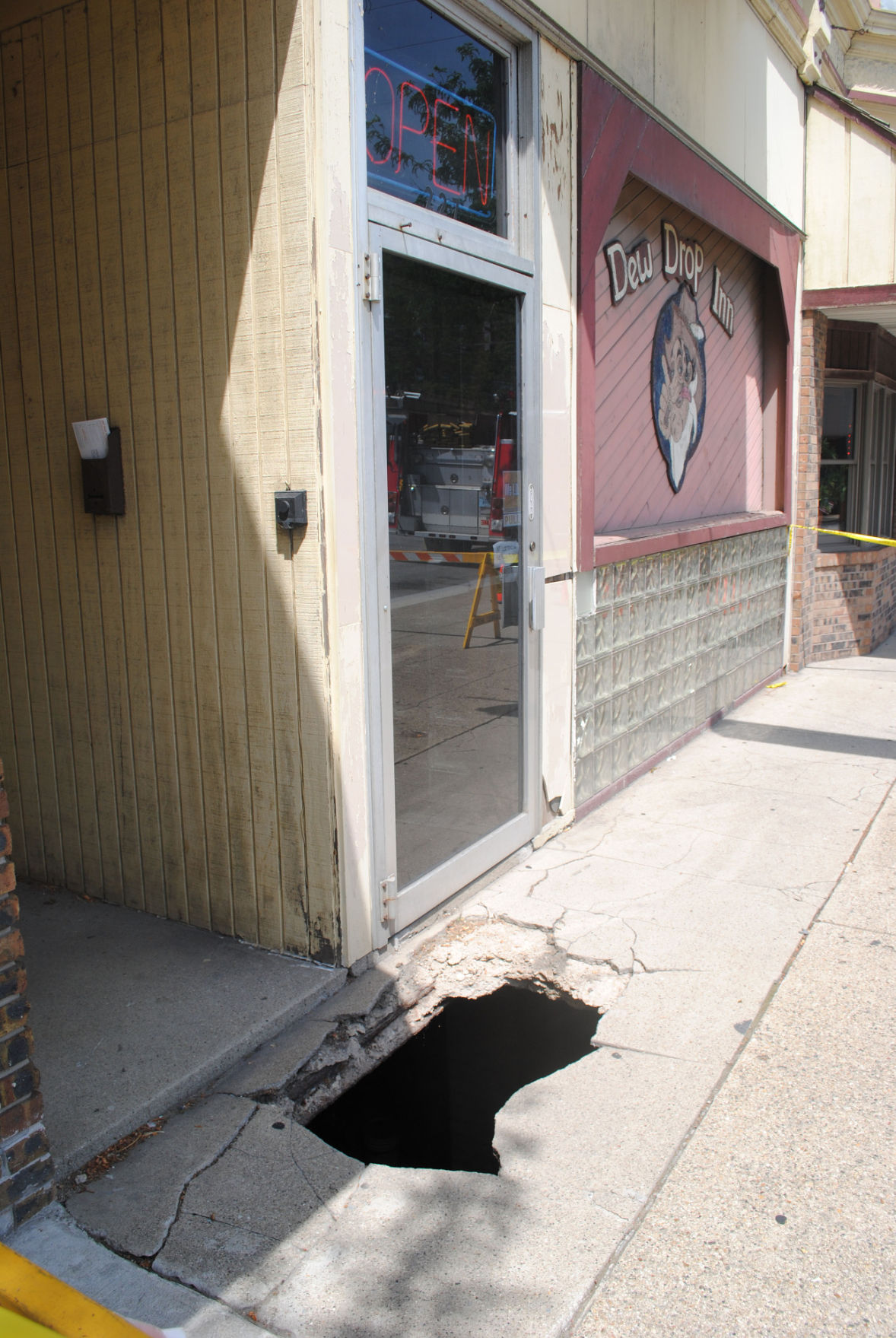 Underground vaults were discovered after Dew Drop Inn owner Ken Carner fell through the sidewalk in front of his establishment as shown in this July 21, 2012, file photo.

Goshen paramedics and firefighters help a man onto a stretcher outside the Dew Drop Inn in this July 21, 2012, file photo. The man fell when the sidewalk gave way underneath him in front of the establishment.

Underground vaults were discovered after Dew Drop Inn owner Ken Carner fell through the sidewalk in front of his establishment as shown in this July 21, 2012, file photo.

GOSHEN — Nearly a decade after their re-discovery, dozens of potentially dangerous underground vaults still line Goshen’s Main Street. It’s a situation city officials know needs to be rectified, though how best to accomplish that task is still being debated.

That debate resurfaced during a meeting Tuesday of the Goshen Redevelopment Commission, when Dustin Sailor, director of public works and utilities for the city, went before the commission seeking funding support for the hiring of a structural engineer to reevaluate the safety of the underground vaults.

According to Sailor, the vaults were discovered when Dew Drop Inn owner Ken Carner fell through the sidewalk in front of his establishment back in July of 2012.

After Carner’s fall, city inspectors discovered many vaults in front of downtown businesses, ranging from ones that had been backfilled already to ones also in danger of possible collapse in the near future.

“Going back to 2012, we had the Dew Drop incident where the property owner fell through the sidewalk into the vault underneath. After that, Goshen Engineering, the Goshen Building Department and the fire department worked through 2012 and 2013 to evaluate the full situation that we had for downtown vaults and did an assessment,” Sailor told the commission. “Redevelopment participated in that assessment. We actually had ground-penetrating radar that was used up and down Main Street, and on some of the side streets. That proved to be beneficial, because we found vaults that were otherwise covered up.”

In response to the discovery of the underground vaults, the city created a cost-sharing program to assist affected downtown property owners with the cost of filling in and sealing the vaults in front of their buildings.

But according to Sailor, there are still 27 vaults remaining along the downtown corridor that need to be addressed, some of which are badly degraded and likely pose a significant risk.

“After we went through that first evaluation series, we identified what the condition of these were, and in 2013 the property owners that had not proceeded with removing or modifying their vaults were required to provide a structural analysis on them,” Sailor said. “So, we had some completed in 2013. Most of those identified that they needed to have annual re-inspection performed. However, I have no inspection reports that I know of for 2014. And then there were some that were submitted in 2015. But there have been no additional inspection reports — from a professional engineer’s standpoint — that have been completed since 2015.”

After a recent visual inspection, Sailor noted that of the 27 remaining vaults, 12 appear to be in good condition; six appear to be relatively stable, though will likely need future condition assessments; while nine of the vaults are considered to be in bad condition and warrant immediate action.

Given the current look of the vaults and the number of years that have passed since a formal evaluation has taken place, Sailor said he is recommending the hiring of a structural engineer to inspect the vaults and determine their structural integrity.

That, he said, is where the Redevelopment Commission comes in.

“The general feeling of staff is that we need to go in and at least look at the 15 sites that are considered either bad or needing some future condition assessment, to have those reviewed by a structural engineer,” Sailor said. “Per the preliminary RFP that I’ve put together, the structural engineer would initially help us assess the review criteria, and then go in and review those vaults. We were curious if the Redevelopment Commission would be willing to fund that structural evaluation.”

Sailor said he did not have an estimate for how much such a project would cost, though he indicated it could likely be quite expensive.

“We would go out for a request for proposals, see what that number comes back as, and then ask for your consideration at that point,” he said of the proposal.

Concerned about the cost of such a study, commission member Tom Stump suggested a better option might be to just resurrect the original cost-sharing program and try to handle the situation that way.

He also questioned whether the city might be able to pass legislation stating that if an affected property owner chooses not to take part in the cost-share program, then they would ultimately be responsible for any liability that may arise should someone be injured due to the vaults.

“Why don’t you just say, ‘We think your vaults are ready to fall in, and we’re ready to pay to fill them up and put sidewalks over them, but you’re going to have to build a wall so the fill that we dump in their isn’t going into your basement,’” Stump said. “‘And if you don’t do it, then you’re the one who is liable, and you need to take care of it.’”

Speaking to how such a policy would be enforced, city attorney Larry Barkes noted that the city would have the option of taking building owners to court, though if the goal is to save the city money, that may not be the best option.

“If you’re talking about is there any possibility of taking legal action to require this, the answer is yes, there is,” Barkes said. “The question then becomes, as Tom’s trying to do, will this reduce the total cost of the project? Going through the legal route probably will not reduce the cost of the process.”

That said, Barkes did note that should such an option be needed, having an official report by a licensed structural engineer would significantly strengthen the city’s position.

“If you ended up where you had to do enforcement in court, the engineering report would be very valuable in that arena,” Barkes said. “So, yes, having the council pass legislation requiring it, that is an option, and it might even strengthen your hand if you end up in court anyway.”

For his part, commission member Brett Weddell asked if the city could potentially pass a form of legislation similar to the ordinance approved by Goshen City Council members requiring city restaurants to put in grease traps as a public safety measure.

Speaking to the grease trap legislation, Goshen Mayor Jeremy Stutsman noted that at the time of that legislation’s passage, the city had also offered a low- to no-interest loan, to be paid back over a year or two, to assist city restaurant owners with the cost of putting in the grease traps. He then suggested that such an option might be a good incentive for the vault program as well.

“When we put the total plan together, that’s not a bad alternative to say we’re willing to step forward and help a little bit,” Turner said. “It addresses the issue that has been with us since 2012 when Redevelopment and the city combined for a very benevolent offer to address this issue.”

In the end, a majority of the commission’s members indicated that they would be interested in exploring the idea of hiring a structural engineer to reevaluate the vaults.

As such, Community Development Director Mark Brinson confirmed that he would be back before the commission next month with proposals in hand for their review.