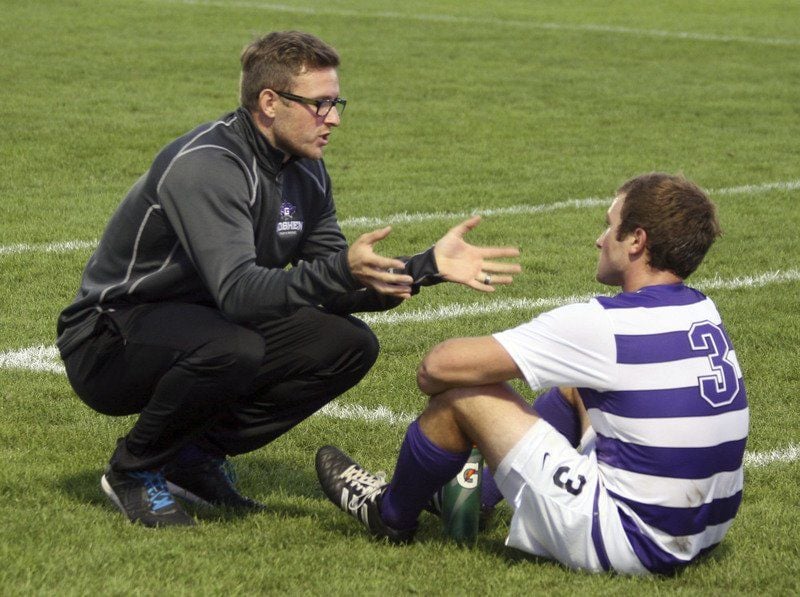 ROBBY HOWARD | THE GOSHEN NEWS Goshen College men’s soccer head coach Arron Patrick talks to one of his players during a Sept. 17 match. Arron is married to Callie Patrick, the Fairfield High School volleyball coach. Arron tried to make it to Callie’s games, and Callie tried to make it to Arron’s games during each of their first years as a new head coach this past fall. 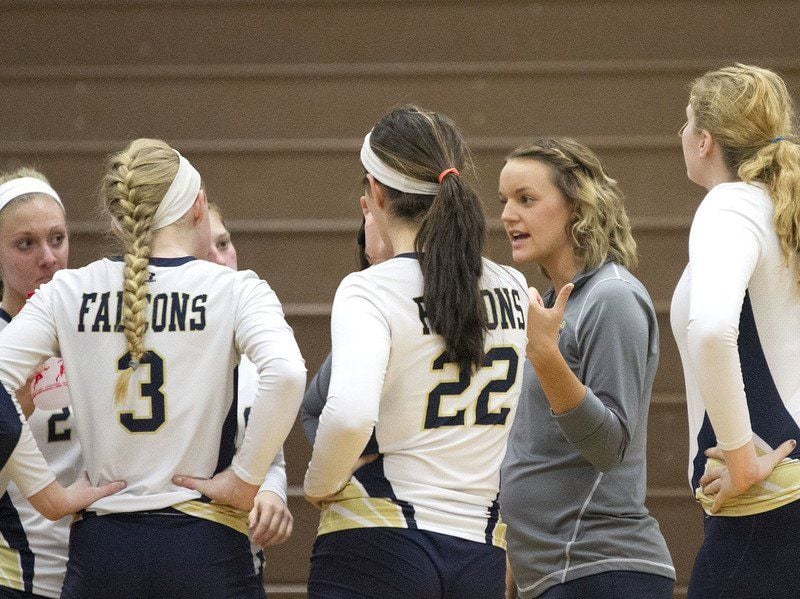 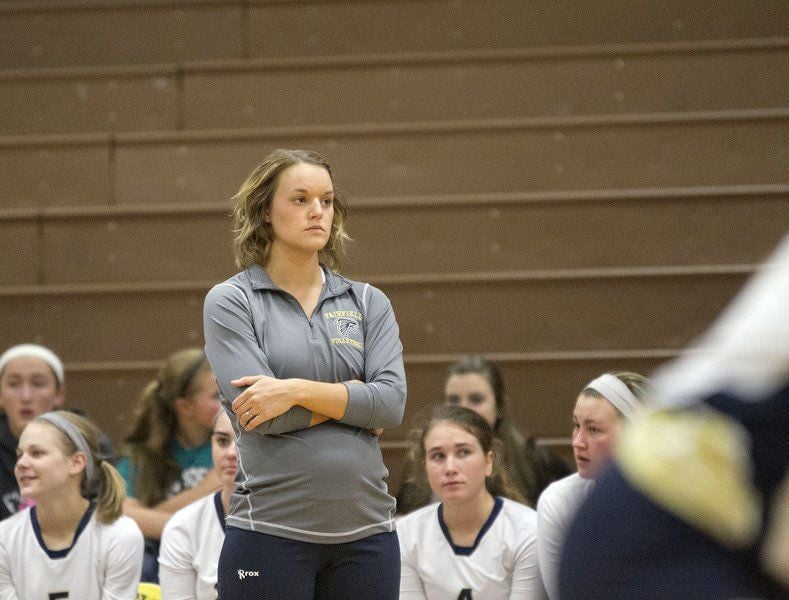 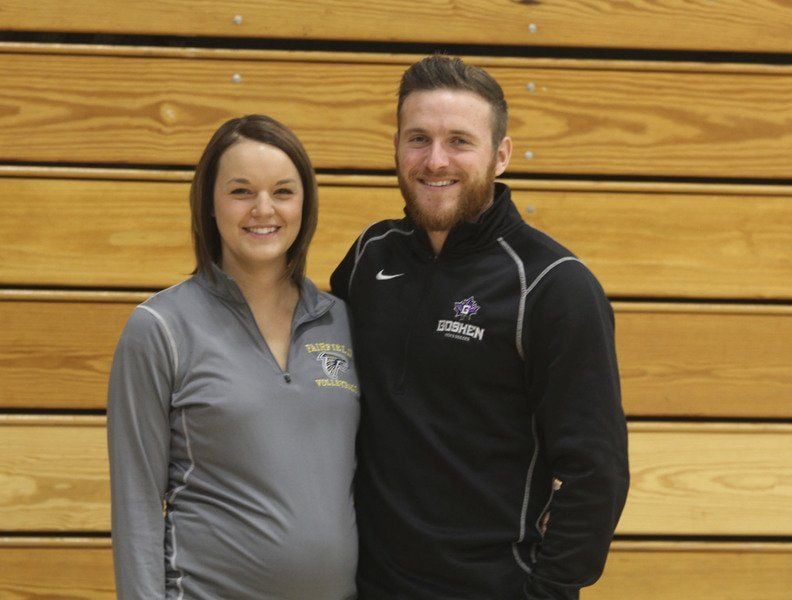 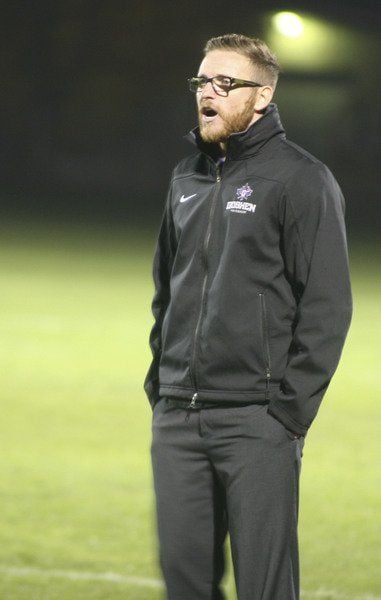 ROBBY HOWARD | THE GOSHEN NEWS Goshen College men’s soccer head coach Arron Patrick talks to one of his players during a Sept. 17 match. Arron is married to Callie Patrick, the Fairfield High School volleyball coach. Arron tried to make it to Callie’s games, and Callie tried to make it to Arron’s games during each of their first years as a new head coach this past fall.

She was a freshman. He was a senior. It was Super Hero night at a Bethel College men’s game in spring 2010.

He painted his body green and wore jean shorts, posing as the Incredible Hulk.

They’re one of the few, if not only, married couples in the area where each is a head coach in a different sport at a different school.

And it all started that March night with the straight-forward freshman telling the Hulk exactly what she thought of him.

“I was just like, ‘You smell so bad, would you mind switching places with somebody?’ she laughed.

She knew who he was — he was Arron Patrick, the man who was named an All-American NAIA soccer player during his time at Bethel, who would go on to play professional soccer. His athletic ability impressed her, and, eventually, she’d end up going to all of his track events that spring.

He knew who she was — she was Callie Hartman, the girl he first laid eyes on before the school year had started, and he hadn’t forgotten about.

He knew from the moment he first saw her in the dining commons at Bethel College that she was the one.

“And she walked in, and one of my buddies from Ireland, Jason Richardson, and I sat there, and I said, ‘Who is that?’ It was (Callie) walking in,” Arron said. “I said, ‘I’m going to marry that girl.’ And he sat there laughing at me. This is a true story. He even talked about it at (our) wedding.”

And as the two have bonded over coaching sports recently, with both in their first year of head coaching this past fall, it was playing sports at Bethel that brought them together.

“We wouldn’t have met if it wasn’t for sports,” Arron said.

There for each other

While Arron always wanted to be a head soccer coach some day, it took a series of life events, and some pushing by Arron, for Callie to join in the head coaching ranks at Fairfield.

Even the past fall, with both coaching different teams, each spouse tried to make it to as many of each other’s games as possible. It helped that the GC soccer team usually played on Wednesday and Saturday and the Fairfield volleyball team normally had matches on Tuesdays and Thursdays.

“I’m up there fist-pumping when they do well,” Arron said. “I really get into it. ... I want Fairfield to do really well just because Callie’s there. And she’s like that with Goshen (College).”

It’s a tradition that dates back to when they started dating.

Throughout the spring 2010, as the two got to know each other more, Arron would look up and see Callie in the stands during his track season.

“I just remember she would come to all my track meets,” Arron said, “and I was like, ‘This girl is weird. Why would she want to come? It’s freezing.’ ...

“I think we’ve always just been really supportive of each other, even from the beginning. That was a big thing for me that she came to all my games, all my track meets.”

For about a year and a half after speaking for the first time, Callie and Arron saw each other almost every single day.

Even after Arron graduated, he took a job at Eastlake Athletic Club and moved in with Callie’s parents in the Dunlap/Elkhart area. During Callie’s senior volleyball season, Arron would travel with her parents in an RV to all of Callie’s games.

The two would get married in 2012. Then, in January 2013, Arron went to play professional soccer and the newlyweds only saw each other for about two weeks during a two and a half month period.

“That was a crazy time,” Arron said. “That was probably the hardest time I think. That timeframe was really hard, even for me. I was playing soccer and it was all a whirlwind and busy. It was exciting, but that was probably the time I was missing her the most because I was going through all these exciting things.”

Arron had flown to Turkey, where he stayed for a little more than two weeks, then signed a professional contract to play in Wilmington, North Carolina.

When he called Callie in an elevator in Turkey to proclaim the good news, her first thoughts were more on what they would do about their newly-purchased house in Indiana, and their new dog, Vinny.

It wasn’t that Callie wasn’t supportive of the move. She was ready to go wherever Arron went. But, Arron says, Callie is the level-headed, rational one in the relationship who thinks big picture.

“It was just all these new things happening at once,” Callie said. “And then, all of a sudden, we’re moving. We’re leaving the house we had just bought and moving into this tiny little apartment.”

They ended up moving to Wilmington and rented their house back in Indiana to a friend. After a year, Arron decided he was done playing professional soccer.

“You always said you wanted to settle down,” Callie said to Arron. “You wanted to have a place to call home.”

“I was like, ‘You know what? I just want to go home,’” Arron said, “’I want to go back to Indiana.’ ... I think that was just when I came to the realization that my family is more important to me than playing for my ego.”

So the two moved back to Indiana. And the coaching started.

Callie started as a JV head coach at her alma mater, Concord, and also on a travel club team, NIVA. Arron started coaching a club team, too.

During the summer, Arron became the head coach at Goshen College, landing his first big head coaching job ahead of his goal, even if it was at he and Callie’s rival school.

And when the volleyball job opened up at Fairfield, Arron talked Callie into it because he knew she’d be good at it, and it’d make her happy.

And this past fall, despite some days not seeing each other and not eating dinner until 9:30 or 10 p.m. most nights, the two did have fun in their first years as head coaches at the varsity level.

Next fall will present an even bigger challenge as the couple is due to have its first child in February. It will be in the heart of travel season for both of the coaches.

The two said they’re trying to not even think about what next fall will be like. But they’re confident that with lots of Callie’s family in the area, they’ll be able to still do everything in their coaching career and tend to their infant son.

“We do it because we love it and that’s where God has blessed us with abilities to teach young people things that we were lucky enough to have coaches (teach) us,” Arron said. “I know that’s why I do it, and I know that’s why Callie does it.”