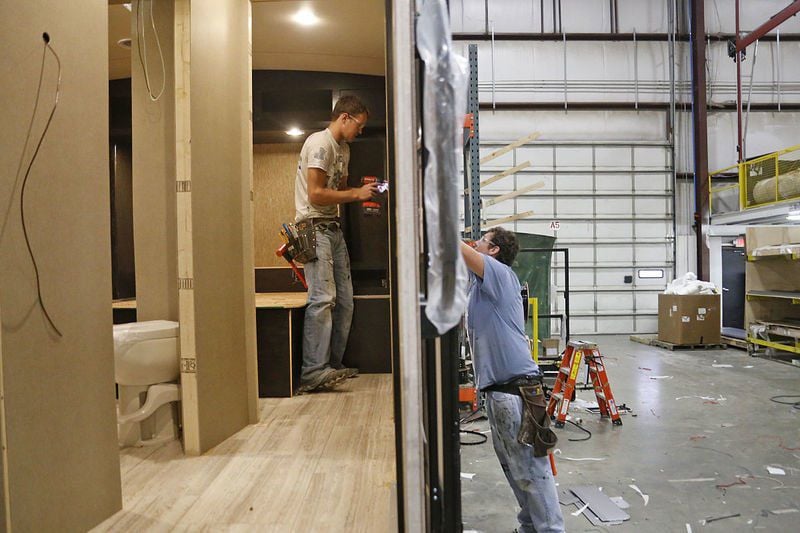 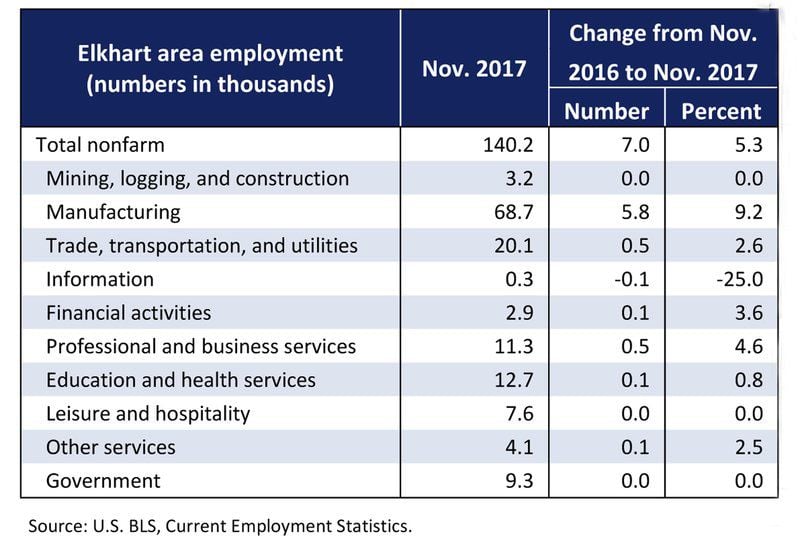 GOSHEN — The Elkhart-Goshen area has led the nation in the largest job percentage gain, and retaining that ranking requires filling roughly 9,500 open positions.

Non-farm jobs in Elkhart and Goshen grew by 5.3 percent from November 2016 to November 2017, according to data released Monday by the U.S. Bureau of Labor Statistics.

While many local leaders credit the recreational vehicle industry for putting Elkhart County on the job-growth map, others say it is a combination of efforts to create a climate that is rich for growth and communities that sustain that growth after it occurs.

“It’s certainly an exciting thing for our community to be able to boast that we have that many jobs being created,” Goshen Mayor Jeremy Stutsman said Friday. “Each community in Elkhart County is working to manage that growth and we’re seeing the effects of that.”

Stutsman said city leaders have been working with developers to bring more housing to the area, as well as redeveloping brownfields and “continuing the process of building quality of life and quality-of-place projects in hopes that we will continue to attract higher-paying jobs which will in turn help our communities and our schools thrive.”

“They have been involved for several month going nationwide with regard to billboards, marketing efforts, working with other state economic development corporations, to attract employees to the county of Elkhart,” Neese said. “And obviously my concern is with the city of Elkhart, and that has been ongoing.”

Included in the city of Elkhart’s plans for accommodating and retaining a widening workforce is the construction of the River District, a multi-million-dollar investment along East Jackson Boulevard to include more than 1,000 housing units and new amenities for the downtown area.

“Our studies show that we can, without any doubt, accommodate people that want to come here and not only live but they want to work here,” he said. “Our studies are showing that Millennials are interested first in housing — they want a place to live. A second on their list, they then pursue job opportunities. And so we have to first provide the housing, and we’re doing that.”

He continued, “The Main Street housing and business district will then complement the River District. And this River District will initially be creating numerous construction-related jobs — whether it’s asphalt, brick, concrete, drywall, roofers, electricians, architects — in building this area. And then we’re going to have retail shops that would include boutiques and clothing stores and restaurants, that are then going to be providing full-time job opportunities in that area.”

“That has really helped business leaders feel confident that they can grow in Indiana,” he said. “The Chamber has fought and advocated for that for a while, but it’s really a perfect storm.

“We have the right conditions and the strength of the RV industry drives a lot of that growth.”

According to a recent report from the Recreational Vehicle Industry Association, the total number of RV shipments through November 2017 was 468,383, up 17.8 percent from the year prior.

“With that increase and growth have come a significant number of jobs,” Kieffer said.

Meanwhile, small businesses continue to grow, he added. That growth is a sign that people feel more confident about where things are headed and when there’s confidence in the growth, there’s usually plans for expansion, Kieffer said.

As business booms, expansions continue for the local manufacturing agency.

“What’s fairly obvious in all of this, but perhaps not discussed, is the RV industry boom,” said Mark Dobson, president and CEO of the Economic Development Corporation of Elkhart County. “They’re working on three consecutive years of record sales.”

Companies including Lippert Components Inc. and Thor Motor Coach are among those leading the way in expansions, he added.

In mid-December, Goshen City Council members heard a plan for the annexation of 330 acres of land at 16629 C.R. 36, southeast of the Elkhart County 4-H Fairgrounds, where Lippert plans to build a new industrial complex. This follows a July 2017 announcement that Lippert would expand operations to the former AM General Warehouse in Mishawaka, with a goal of adding 200 jobs in the next two years, in addition to a plan to create 135 jobs in Allen County.

According to a November 2017 BLS Current Employment Statistics report, manufacturing positions led Elkhart-area employment with about 68,700 jobs. An employee of the BLS, who wished to remain anonymous, said manufactured products include durable goods such as RVs.

Trade, transportation and utilities followed with about 20,100 jobs, and education and health services rounded out the top three sectors with about 12,700 jobs reported. The same BLS employee said queried companies are not required to report their employment numbers, so data may not be comprehensive.

Within the health care sector, local job opportunities could spike with the potential construction of a new facility within Elkhart’s city limits.

“There’s a health care facility that is going to be locating here that I can’t divulge at this point, but I’m anticipating a groundbreaking probably yet this quarter that is unrelated to the recreational vehicle industry,” Neese said. “That’s going to be a facility that will employ about 450 new employees. And that’s going to have then several other amenities that are health care-related. And then, although in the early stages, because of that development, we are looking at then an expansion of an existing business to locate there.”

Goshen Health officials said Friday their job creation during the November 2016 to November 2017 time period was 188 people for a total of 1,921 full-time, part-time and “casual” colleagues.

In addition to the health care facility, Neese said he’s had two phone conversations and a meeting with developers in regard to the potential construction of a multi-use event center that could accommodate recreational vehicle activities and sporting events.

While Elkhart County’s role as the nation’s capital of recreational vehicle manufacturing continues to spur job growth, officials noted one of the area’s biggest challenges continues to be finding people to fill the jobs.

“We have jobs, there’s no question about that. Now it’s a matter of getting people into those jobs — the human capital part of it all,” Kieffer said. “There’s still more room for growth, especially job growth, if we can get those jobs filled.”

That’s the elephant in the room, Dobson said.

According to a December 2017 report by WorkOne, there are approximately 9,500 unfilled jobs available in Elkhart County, Dobson said.

“If there’s any irrational exuberance here it’s that we, as a community, didn’t try to address the oncoming labor issues,” he said. “Business leaders have chided us — and rightfully so — that we’re about five years late in this arena.”

But, Dobson added, there are a few “game changers” working behind the scenes to help the county catch up.

Initiatives including Vibrant Communities and Regional Cities are making progress toward the sort of “experiential things that the workforce is looking for today,” Dobson said, citing the Elkhart Health, Fitness, Aquatics and Community Center and The Goshen Theater renovations as examples of these efforts.

“It’s really these grassroots, organic efforts to attract people in the future that will make the difference,” he said. “We’re all becoming more intentional about telling people what a great place this community is.”

Neese noted the River District development as a boon for sustaining prospective workers’ interest in Elkhart.

“In terms of the River District, that shows how competitive Elkhart wants to be,” he said. “That quality of place is very important, that when a business looks to northern Indiana, and we’ll say maybe a four-county area that would include the Elkhart County, that if everything were equal, I want them then to say that the city of Elkhart and Elkhart County clearly was the most competitive and showed us that they are very serious about not only keeping the existing business but attracting business to our area.”

Both Dobson and Kieffer said they expect the job growth momentum to continue.

“From what we’ve heard early on and some of the data we’re seeing now, I think 2018 will still be a year of growth for a lot of these industries,” Kieffer said. “All signs indicate we’re poised for continued growth.”

This chart shows the top 10 metropolitan areas across the county with the largest percentage change in non-farm employment from November 2016 to November 2017, according to data provided by the U.S. Bureau of Labor Statistics.

This chart shows metropolitan areas in Indiana and the corresponding percentage change in non-farm employment from November 2016 to November 2017 for each of those areas, according to data provided by the U.S. Bureau of Labor Statistics.