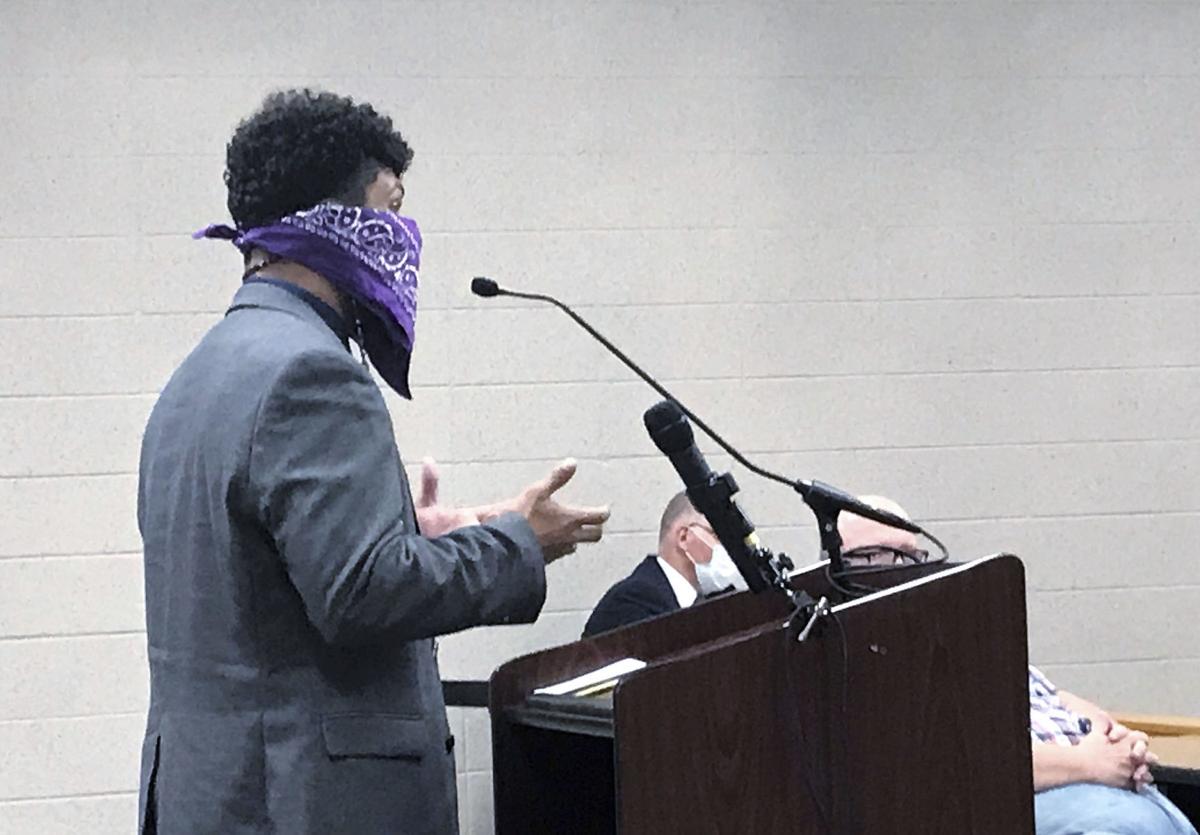 Abraham Medellin, founder of the local 4US movement, speaks to Goshen City Council members Tuesday about a proposal to paint a Black Lives Matter mural along Main Street in downtown Goshen. 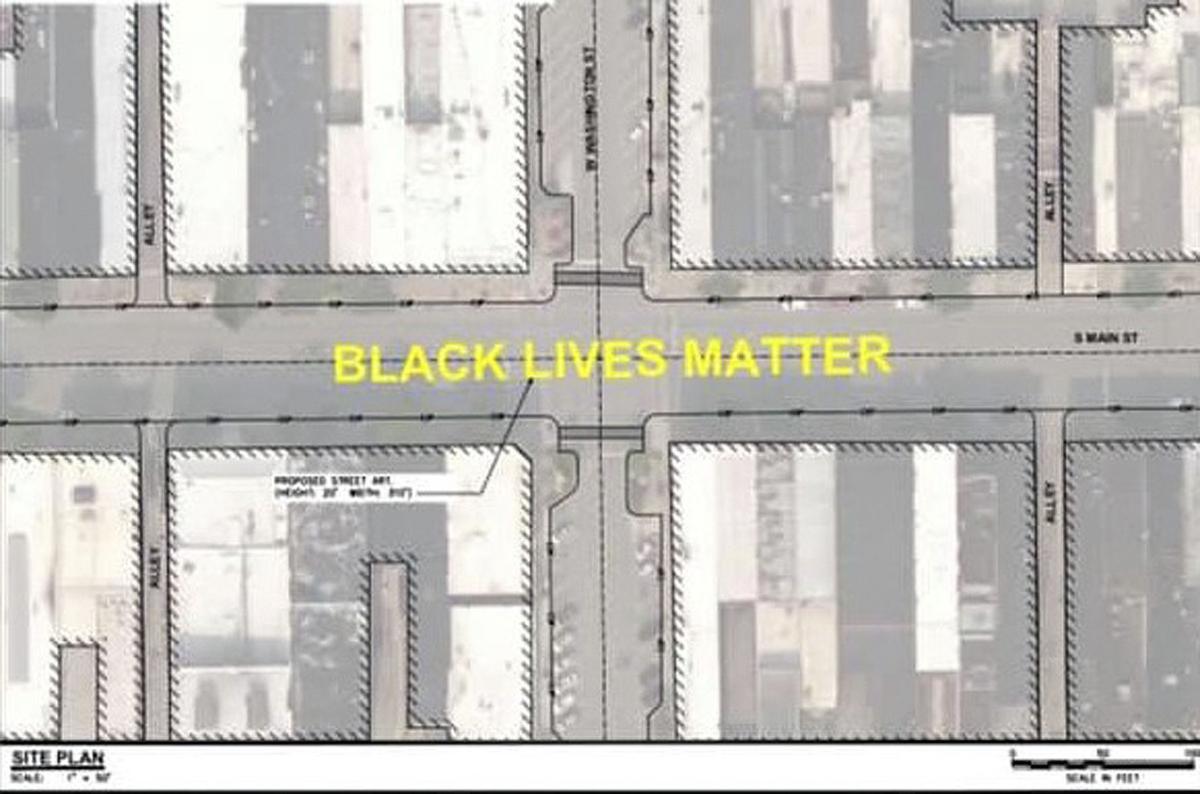 This provided image shows an example of what a proposed Black Lives Matter street mural might look like along Goshen’s Main Street.

Abraham Medellin, founder of the local 4US movement, speaks to Goshen City Council members Tuesday about a proposal to paint a Black Lives Matter mural along Main Street in downtown Goshen.

This provided image shows an example of what a proposed Black Lives Matter street mural might look like along Goshen’s Main Street.

GOSHEN — Energized by the May 31 protest in downtown Goshen held in response to the deaths of George Floyd and other black Americans by police, local activist Abraham Medellin went before the Goshen City Council Tuesday with a request: allow a large Black Lives Matter mural to be painted at the intersection of Main and Washington streets where the protest ended.

The council took no action on the request and Mayor Jeremy Stutsman said the city’s Board of Public Works and Safety will be responsible for making the decision.

Medellin, 23, of Goshen, is founder of the recently formed 4US movement.

Per the group’s description, 4US “is for the people, by the people, and focusing on the next generation. We are the voices that want to be heard and taken serious. We are the ones with ideas that can really set off a spark into the minds of many giving one another hope.”

During his presentation, Medellin provided council members with a written proposal, penned by 4US leadership, outlining both why the group is requesting approval of the street mural, as well as what they hope the mural will look like, and how it will be created and maintained.

“What I’m asking from you guys cannot just be a ‘Yes’, and it’s done. I know I have more hoops to go through,” Medellin said of his request. “I am coming to you guys asking for guidance. I am asking you guys to lend a hand to what I’m trying to do. I’m asking you all to join me in rewriting history. I don’t play with these words, and I do not mean them lightly. I truly mean this. I believe in what we’re doing. I can see what Goshen can be.”

In beginning the proposal, the group applauds the city’s leadership for having publicly recognized and acknowledged Goshen’s racially exclusionary past as a sundown town — the name given to the practice of requiring African-Americans and other ethnic groups to be out of the city by sundown — with the unanimous passage of a resolution by the council back in 2015.

“Goshen’s recognition of this status proves the city does want to take steps to reconcile with its history of racial inequality and lead into the 21st century on a spirit of equity for all residents,” the proposal states.

However, the group goes on to note that racist incidents have continued to occur in Goshen in recent years, and as such urged the city to take further steps to provide a more equitable future for all Goshen residents.

That, the group suggests, is where the proposed Black Lives Matter street mural comes in.

Founded in 2013, Black Lives Matter is an organized movement dedicated to eradicating white supremacy and building local power to intervene in violence inflicted on black communities, the website blacklivesmatter.com states.

According to the proposal, the idea for the Goshen street mural was inspired by Washington, D.C., Mayor Muriel Bowser’s recent decision to rename a section of the street directly in front of the White House “Black Lives Matter Plaza.” To mark the name change, the street was painted with the phrase in giant, yellow letters that run down the busy street.

“While criticized as performative and a political play, the mural project did draw national attention and remains to this day,” the proposal states. “Since then, cities coast to coast have completed similar projects to overwhelmingly positive response.”

As currently proposed, the letters of Goshen’s Black Lives Matter street mural would be 20 feet in height, with the mural stretching a total of about two blocks along Main Street with a midpoint at the Washington Street intersection.

“The goal of completing a BLM mural in Goshen is to show support for BLM in a peaceful manner,” the proposal states. “Furthermore, the BLM mural is a sign to the city’s commitment to taking active and public change. The BLM mural paint — while temporary — will last an amount of time long enough for the city to also begin action in other ways. Furthermore, it is a public sign and reminder of the city of Goshen’s pledge to prove that in Goshen, we hold a truly diverse and inclusive community and wish to make it more so in the future.”

And should there be enough community interest shown, the group also proposes setting aside each letter of the mural to be designed and painted by a different group, such as local educators, immigrants, musicians, health care workers, students, and members of the local LGBTQ+ community.

“The mural project strives to actively recruit diverse groups to help each paint a letter,” the proposal states. “These letters make up part of the whole phrase ‘Black Lives Matter,’ serving as a further reminder that different groups combine and mix to make beautiful communities.”

Speaking to the project’s anticipated cost, the group predicts a paint cost of approximately $250, with most other supplies, such as paint brushes, trays, and water/refreshments, being provided by project volunteers. The proposal also notes that painting of the mural would require the city to temporarily shut down the targeted section of Main Street in order to allow the painting to proceed.

BOARD OF WORKS PERMISSION NEEDED

While no formal action on the request was taken by the council Tuesday, Medellin noted he is scheduled to go before the Goshen Board of Public Works and Safety during its June 22 meeting, where the final answer on whether or not the project will be allowed to move forward could be decided.

“My purpose here is bringing the community together around our brothers and sisters, our kings and queens, and tell them that this is a place where you can grow. This is a place where you can be,” Medellin said in concluding his presentation. “I don’t want Goshen to wait for the world to change, and then we do something very minimalistic and pat ourselves on the back, and just say, ‘OK, we did something. We’re now moving on.’ I’m asking us to join this movement.”

At the close of Tuesday’s presentation, Stutsman thanked Medellin and his fellow 4US members for all their hard work and passion — something he said the city could use much more of in the future.

“I appreciate your heart. Wanting to bring people together is phenomenal, and I definitely appreciate your heart,” Stutsman said. “The Board of Works does meet on Mondays, and I’m one of those members. That’s the group that would have to say yes or no to something like this. This is the first time something like this has been requested in Goshen, and I’d like to hear a little bit from council members about thoughts, either now or by email after. But just know that a yes or a no from the city is not a sign of non-support, because there are a lot of things we have to look at and consider.”

Along those lines, Stutsman said he will be contacting the city’s legal department to inquire about whether allowing the BLM mural to proceed might set an unwanted precedent for the city.

“One question I want to ask the city’s legal department is, is this one of those scenarios where if we say yes to one group, we have to say yes to all groups,” Stutsman said of the issue. “But I think there’s something we can find to do together. I definitely appreciate your heart, and your enthusiasm, and your care for our community. We need more of that, absolutely.”

For more information about the 4US movement and its work, visit the group’s Facebook page at www.facebook.com/groups/542358266432619/.

GOSHEN — Following Monday’s denial of their request to have a Black Lives Matter street mural painted in downtown Goshen, members of the local…