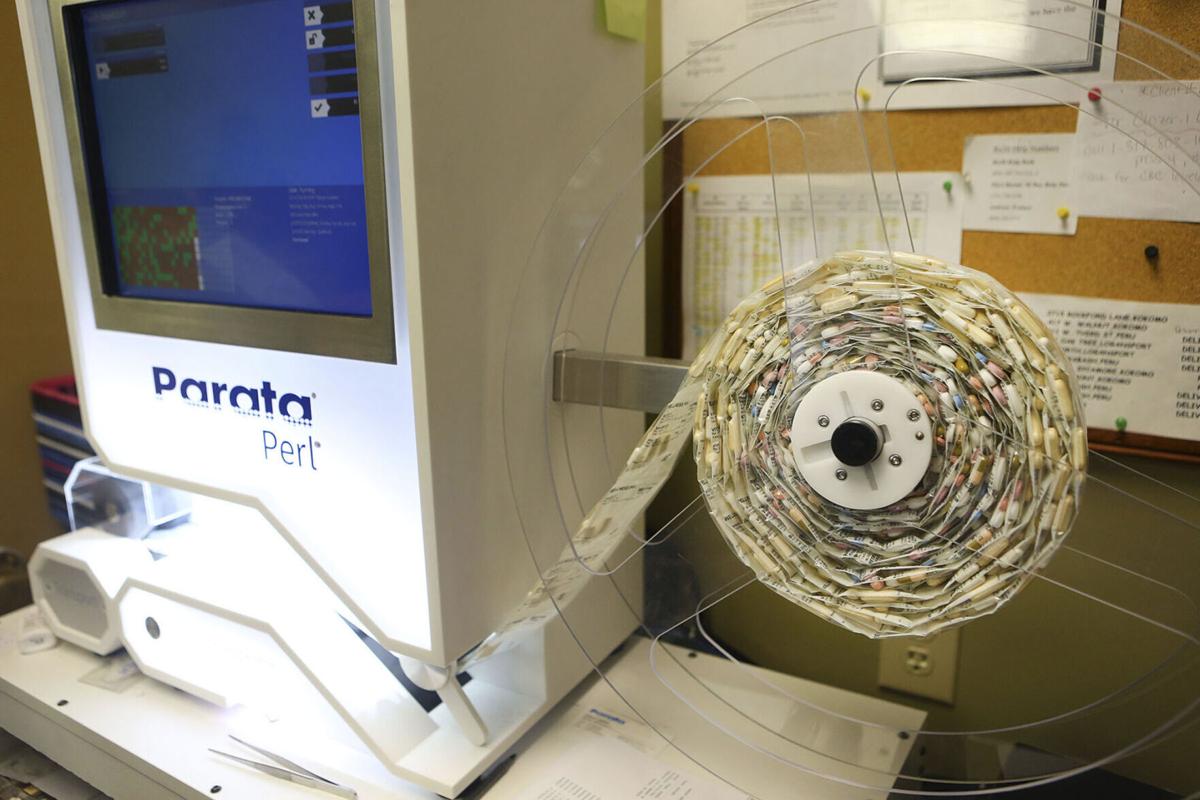 The Parata Perl machine inspects and takes photos of wellness packs at Herbst Pharmacy in Kokomo on Tuesday. 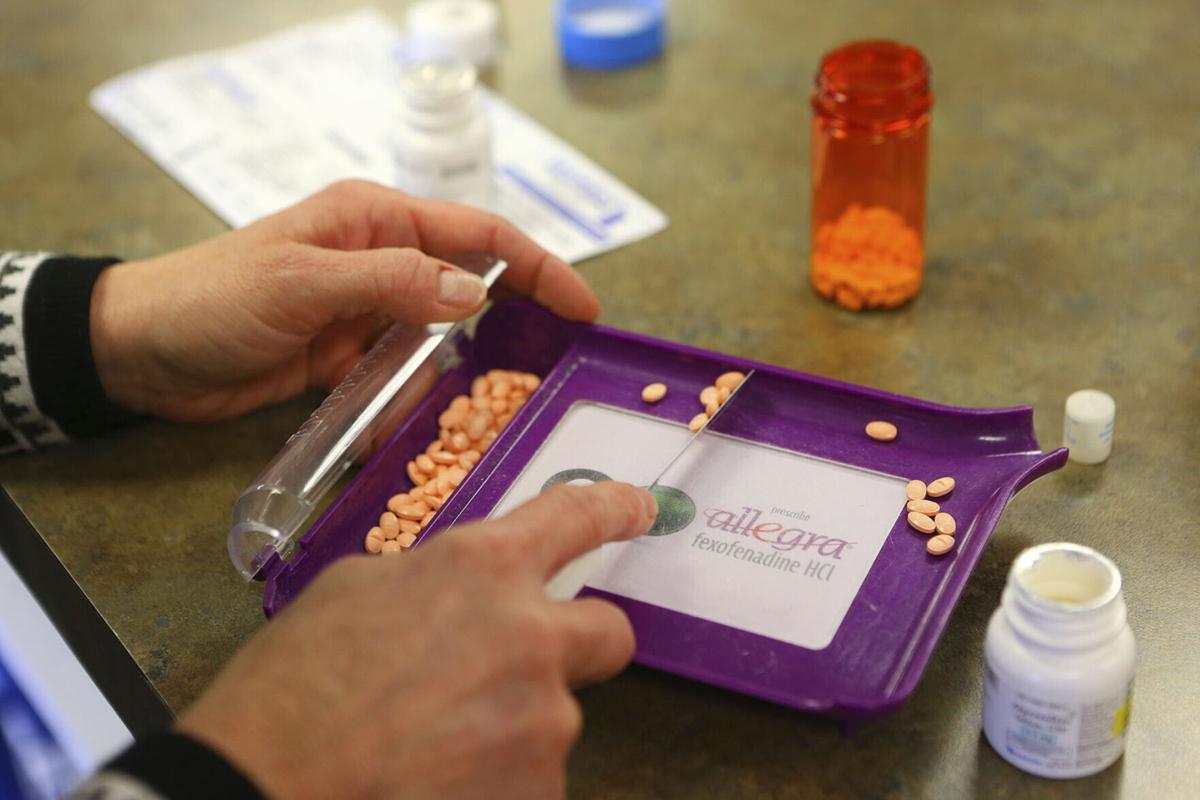 Pills are counted and sorted at Herbst Pharmacy in Kokomo on Tuesday. 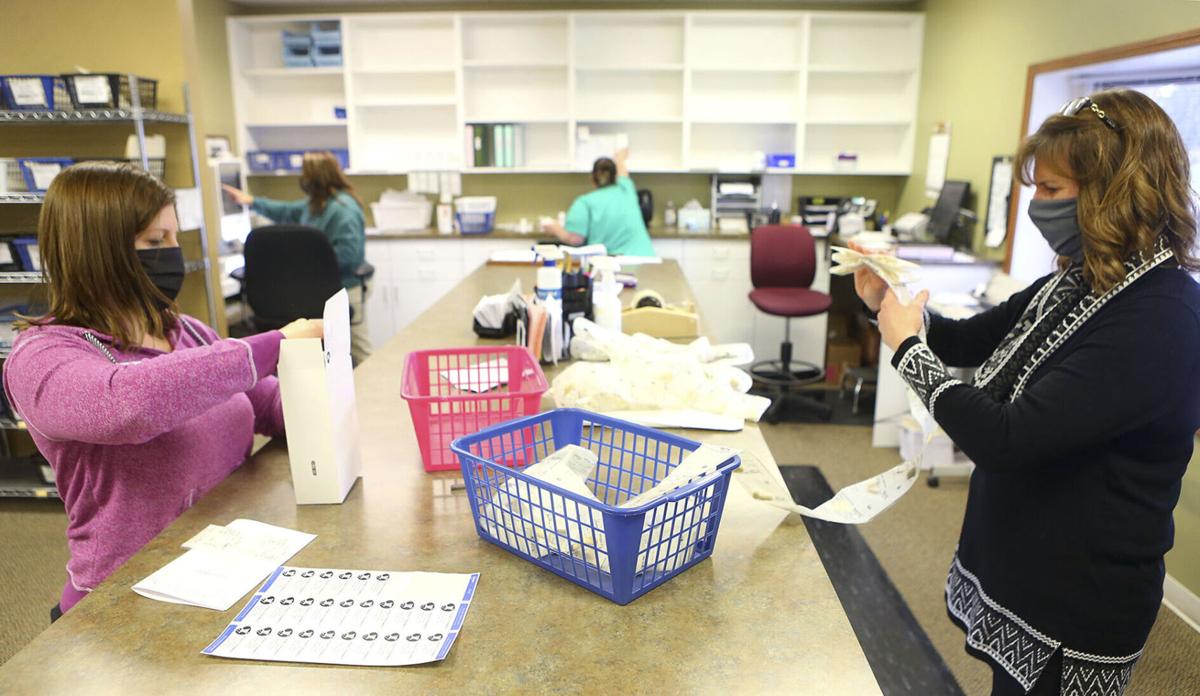 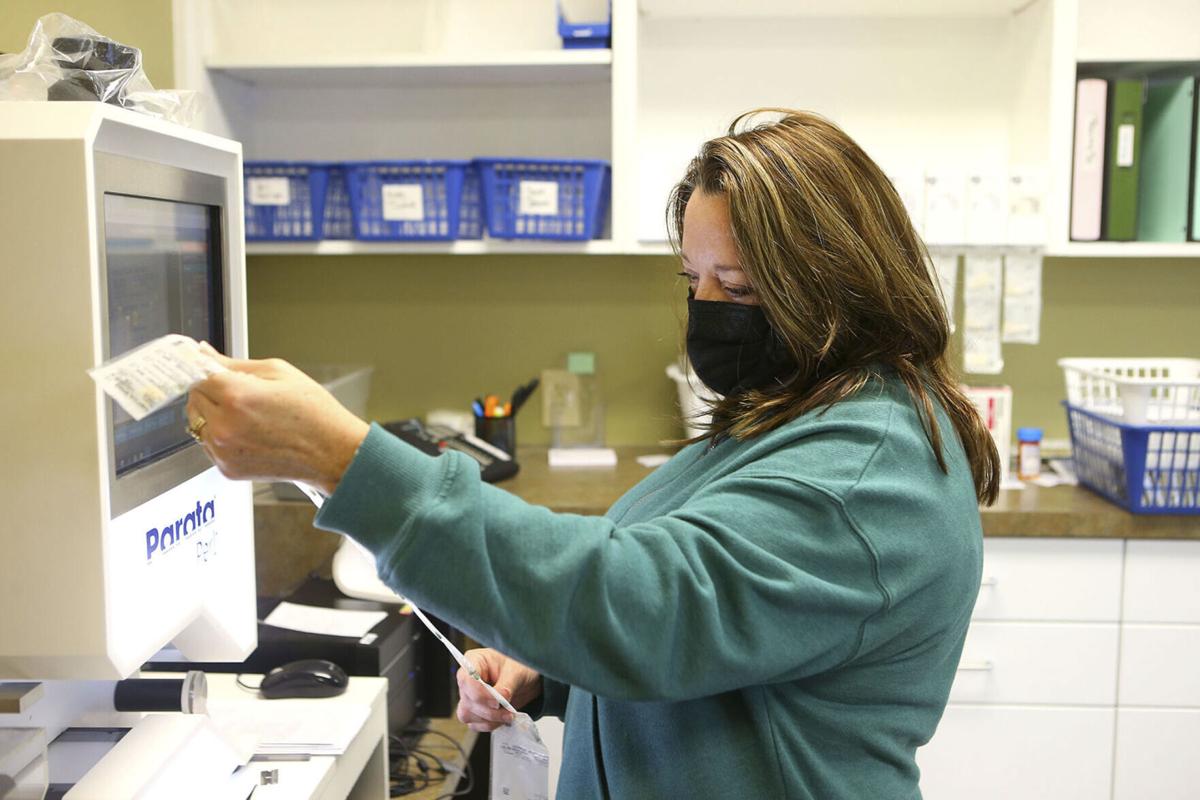 Jill Shoemaker sorts through patients packets of medication at Herbst Pharmacy in Kokomo on Tuesday.

The Parata Perl machine inspects and takes photos of wellness packs at Herbst Pharmacy in Kokomo on Tuesday.

Pills are counted and sorted at Herbst Pharmacy in Kokomo on Tuesday.

Jill Shoemaker sorts through patients packets of medication at Herbst Pharmacy in Kokomo on Tuesday.

If you’re like two-thirds of adult Americans, you’ve probably taken at least one prescription medication in the last 30 days, according to the Centers for Disease Control and Prevention (CDC).

When that pill bottle gets low, it’s usually time to get a refill. So, what happens when your blood pressure pills are completely out, and so is your pharmacy?

Of the 40 drugs critical for treating coronavirus patients, 29 of those medications are limited due to shortages. This includes propofol, albuterol, midazolam, hydroxychloroquine, fentanyl, azithromycin and morphine, according to the American Society of Health-System Pharmacists (ASHP).

The Food and Drug Administration (FDA) has a list of 156 critical acute medications — drugs that are necessary in hospitalized patients’ treatment — at least a third of those medications are in short supply, according to a report published last month by the Center for Infectious Disease Research and Policy (CIDRAP).

Drug shortages have been an issue for decades, Darren Covington, executive vice president for the Indiana Pharmacists Association, said in an email. As hospitalizations rise due to COVID-19, critical medication supplies plummet.

“We also saw many patients wanting to ‘stock up’ on their chronic medications, which drove a sudden spike in demand that initially the market struggled to keep up with,” he said.

The U.S. drug supply chain has been “vulnerable” for years and “those vulnerabilities are exacerbated by the COVID-19 pandemic,” according to CIDRAP.

Norma Walden, system pharmacy manager for Community Health Network, which has facilities throughout Indiana, said in an email that the drug industry, too, has felt the significance of the pandemic.

“Just as every industry has struggled to maintain supplies during the pandemic, the drug industry has as well. COVID-19 has increased demand for certain medications. Supply is unable to keep up,” she said.

Both Walden and Trujillo said they manage shortages by communicating across their relative hospital systems, transporting treatments between locations when needed. Purchasing drugs is a daily ordeal, and decisions on what to order depend on the status of shortages.

From hospitals to home

Inadequate drug supply is being felt in every level of the healthcare system.

Herbst Pharmacy, based in Kokomo, offers compounding services by custom-making medications to fit a patient’s needs, as well as regular medication.

“We are more often handling chronic conditions and those medications. And we try to work around what that problem is,” she said. “I don’t want to minimize the problem we have because it can absolutely impact therapy for a patient. But a lot of times, we have more time to work through issues.”

Condo walked through how she handles a drug shortage. Her first call is to the pharmacy’s primary wholesaler, a company that sells medications to pharmacies. Wholesalers usually have contracts with certain generic brands, thus affording a lower price.

Sometimes the wholesaler will be able to ship from an alternative site, but that puts delivery of medication 24-48 hours behind schedule. She may also call the patient’s doctor for a possible therapeutic equivalent in the interim.

If the wholesaler doesn’t work out, Condo said she’ll reach out to secondary wholesalers, which can be tricky.

“There’s minimums you have to place in order to make (using those wholesalers) worth your while,” she said. “So, sometimes that’s a struggle because I might badly need a drug, and I can find it here. But I have to pay an exorbitant shipping fee or meet a minimum in order to get that drug shipped to me,” she said.

Patients can avoid getting caught in a shortage by calling in medication before running out, Condo said. Most insurance companies can process refills when the medication is 80% exhausted, so Condo said ordering five days before the end of the prescription is a good practice.

“That gives us a little bit of time to work through an alternative,” she said. “So if it’s a blood pressure medicine or a heart medication and that patient has taken their last tablet, and they’re (saying), ‘Oh, I need that yesterday,’ that creates a more critical situation than it would have to otherwise be.”

‘It’s complicated’: Pinning down a cause

There are many things that have caused the pattern of medication shortages in drug supply, Covington said.

“If you have three general manufacturers that are making Drug X, let’s assume it’s a generic drug,” he said. “If Company A suddenly says, ‘No, I’m not going to make this anymore.’ Then all of a sudden you have a third of the supply chain is gone. It’s not that we can’t buy it at all, but it’s cut by a third now.”

On top of the unanticipated cut in supply, it usually takes a few months for the other manufacturers to catch up to the higher demand, he said. This lack of communication can result in months of shortages, according to the FDA.

“I don’t even know where all of those products are made,” Trujillo said. “Some are in Indiana, some are out-of-state, some are overseas.”

Just as the public emptied stores of toilet paper and disinfectant wipes, panic buying applies to the medical field, too. Trujillo said when he’s placing orders, he has to consider the ethics of what he’s ordering.

“So, stockpiling, you try not to do it and encourage other health systems not to buy a year’s supply and have it sit on their shelves. …” he said. “At the same time, other places will start stockpiling. So you have to look for the right opportunities, ‘When can I buy, how much can I buy? How long can I wait to buy?’”

And it’s not just the hospitals stocking up, Covington said.

“We also saw many patients wanting to ‘stock up’ on their chronic medications which drove a sudden spike in demand that initially the market struggled to keep up with,” he said.

However, shortages aren’t as common in over-the-counter medications. Covington said the empty shelves of Tylenol at the beginning of the pandemic were due to a sudden spike in demand, just like with toilet paper. Walden said that in the spring she had issues stocking zinc and vitamin C, and has begun to see a slowed supply in those items again.

The damage from Maria was so widespread that small-volume IV saline bags were in short supply, according to a 2018 study published in the Bulletin of the American College of Surgeons. The study, “Drug Shortages: the Invisible Epidemic” also cited that increased FDA regulation has resulted in the unexpected closure of production facilities and the raw product used to make medication as factors.

What can be done?

Individual reports by CIDRAP, FDA, the AMA and the Mayo Clinic conclude that drug shortages are a public health crisis that must be dealt with swiftly.

The organizations are pushing for more transparency of the drug supply, which would be backed and funded by Congress. This would force communication and public access to information on where medications are made; what companies are, or have stopped, making them; and if they have chosen to stop making affordable medications for a more costly alternative, according to CIDRAP.

Laura McCaffrey, senior director of the Government Relations and Advocacy for Indiana Hospital Association, said in a statement that IHA would support legislation that would alleviate these shortages.

But some aren’t expecting much change.

Covington said “shortages are going to always be inevitable.” Aside from personal advocacy, Trujillo said there’s not much more the consumer can do. He too believes the shortages aren’t stopping any time soon.

“I don’t know any health system that isn’t trying to actively address it by keeping track of stuff and limiting waste and things,” Trujillo said. “It’s one of those things, it’s there, but there’s not a clear cut answer. I’ve been a director for almost 13 years now in this position, but I’ve been a pharmacist for almost 20 and I’ve had to deal with drug shortages my whole professional career and I don’t see it going away.”