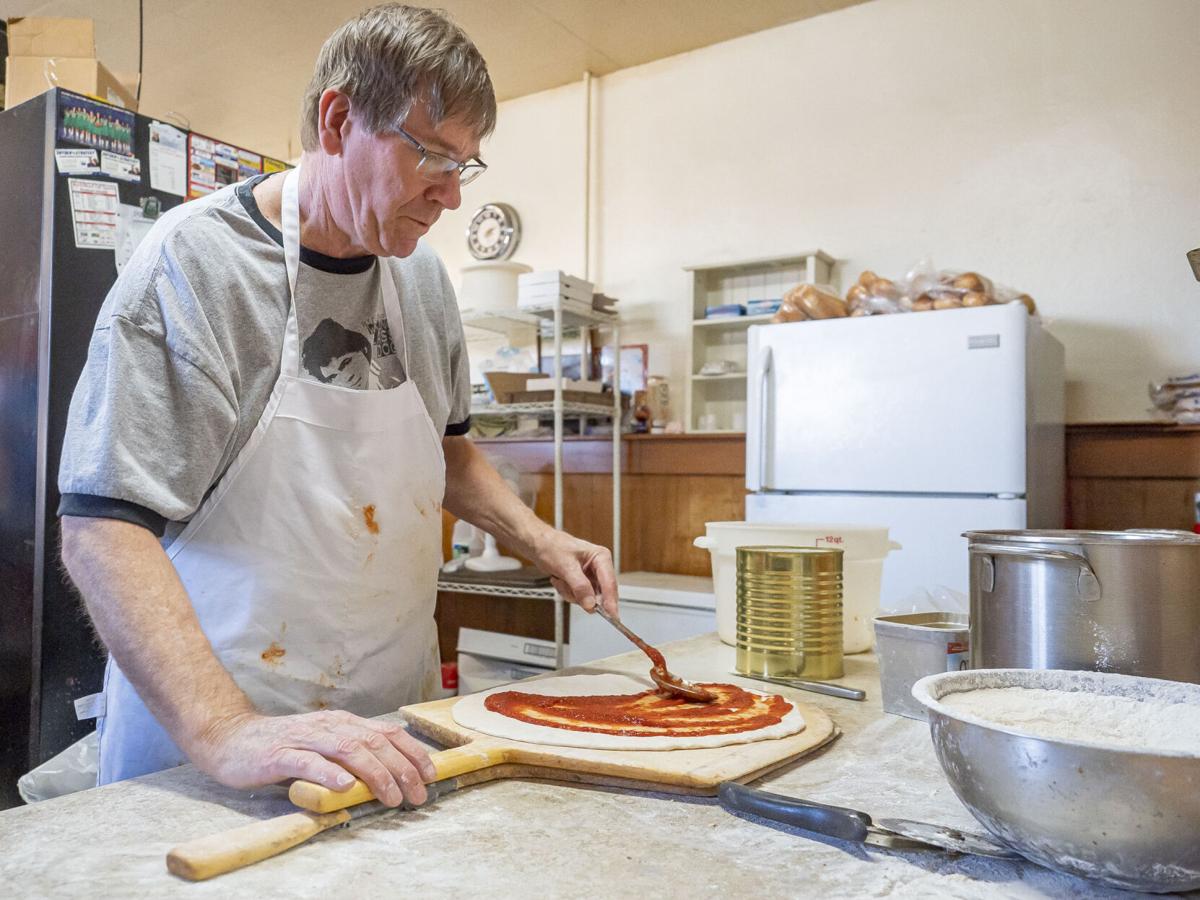 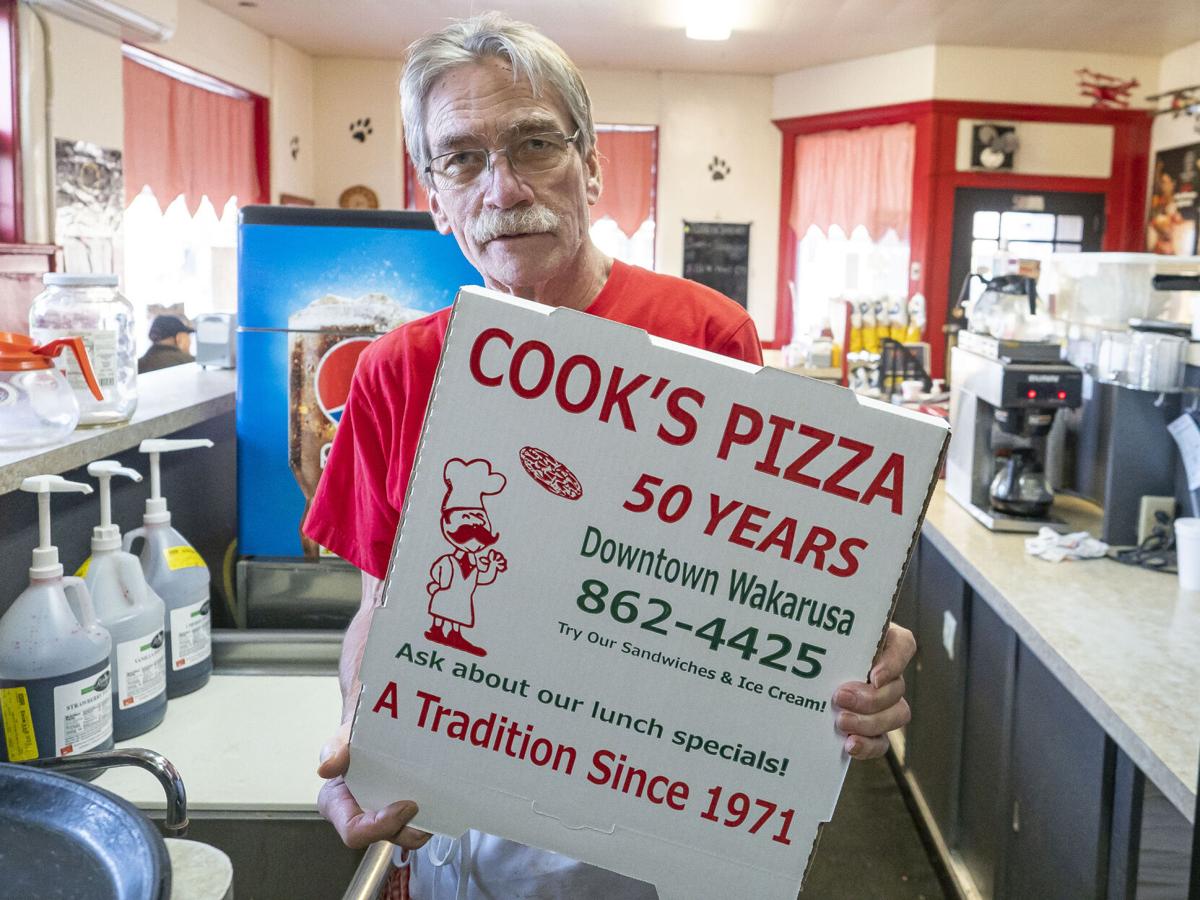 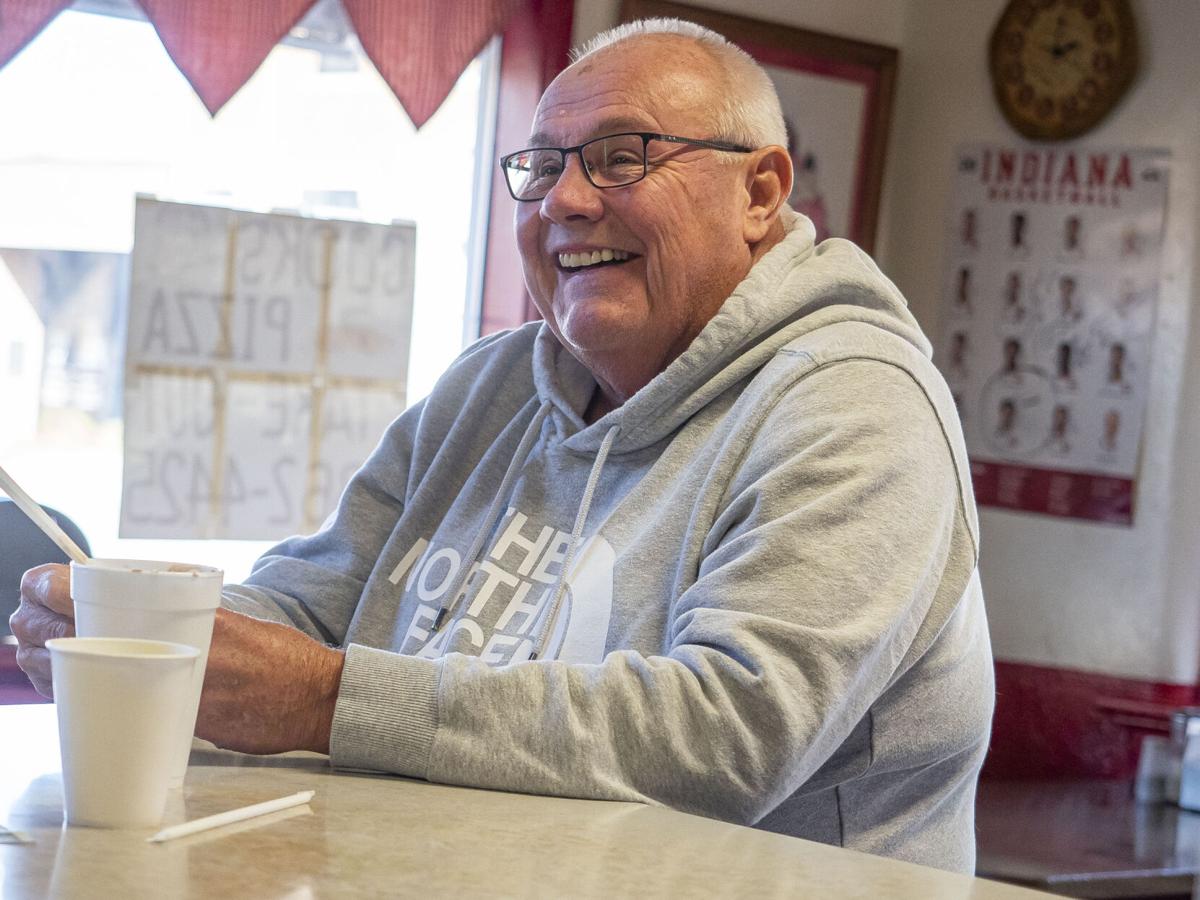 Randy Abel, of Wakarusa, sits at the counter at Cook's Pizza in Wakarusa. 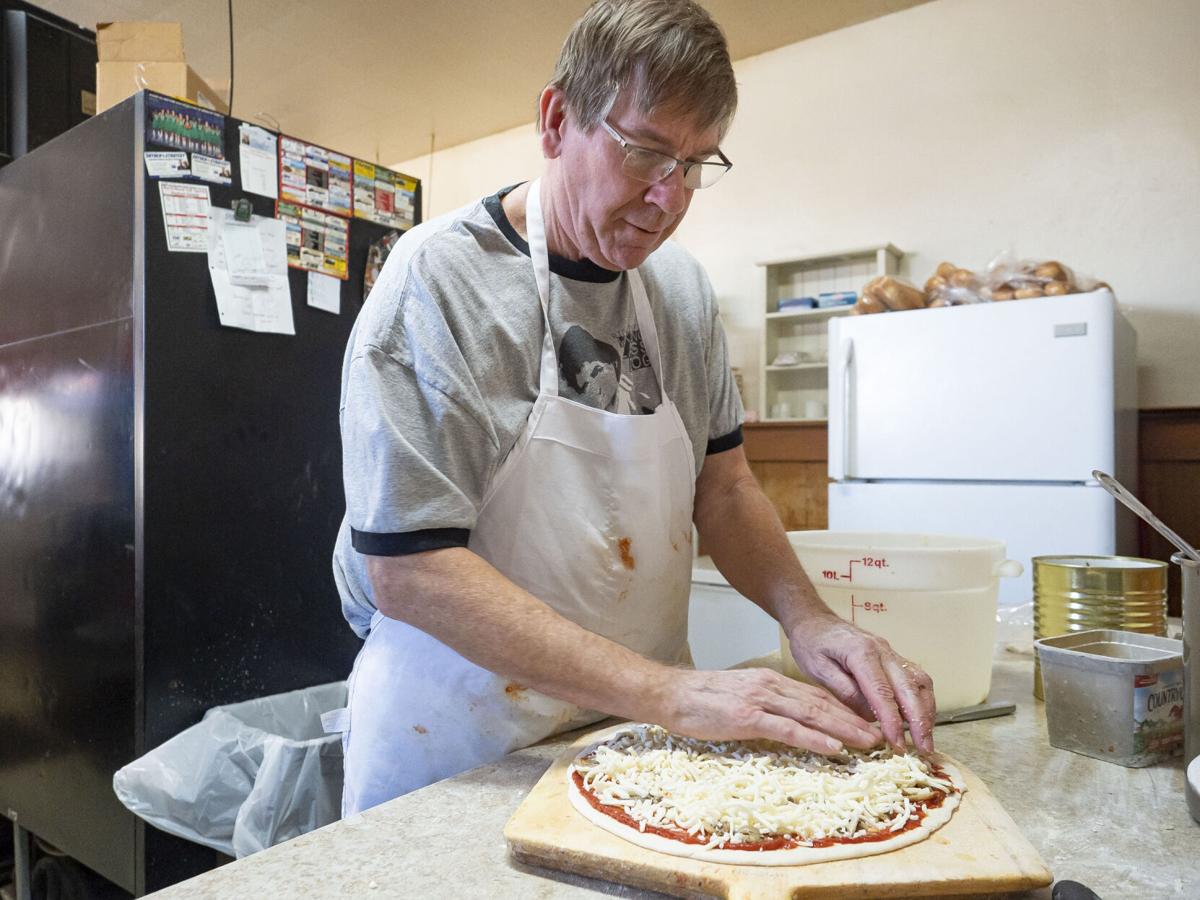 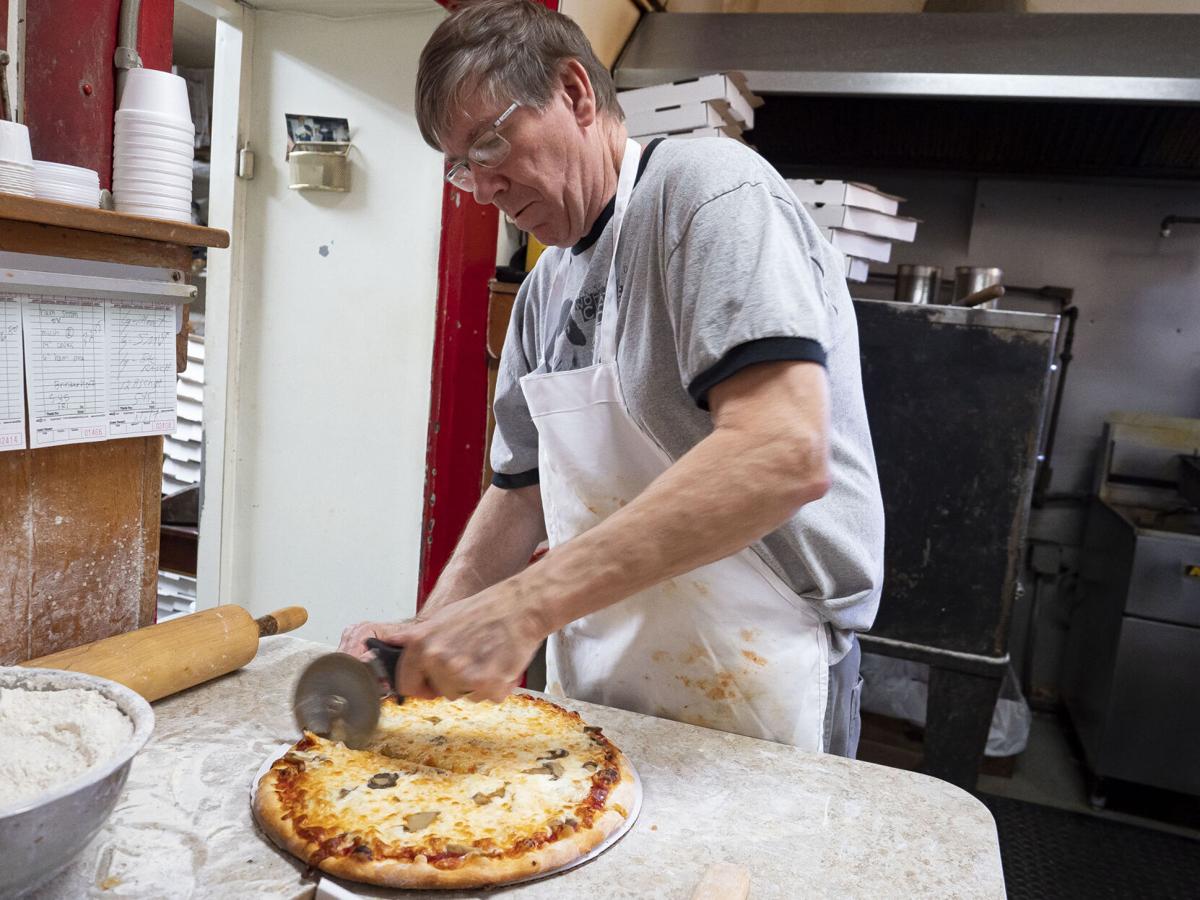 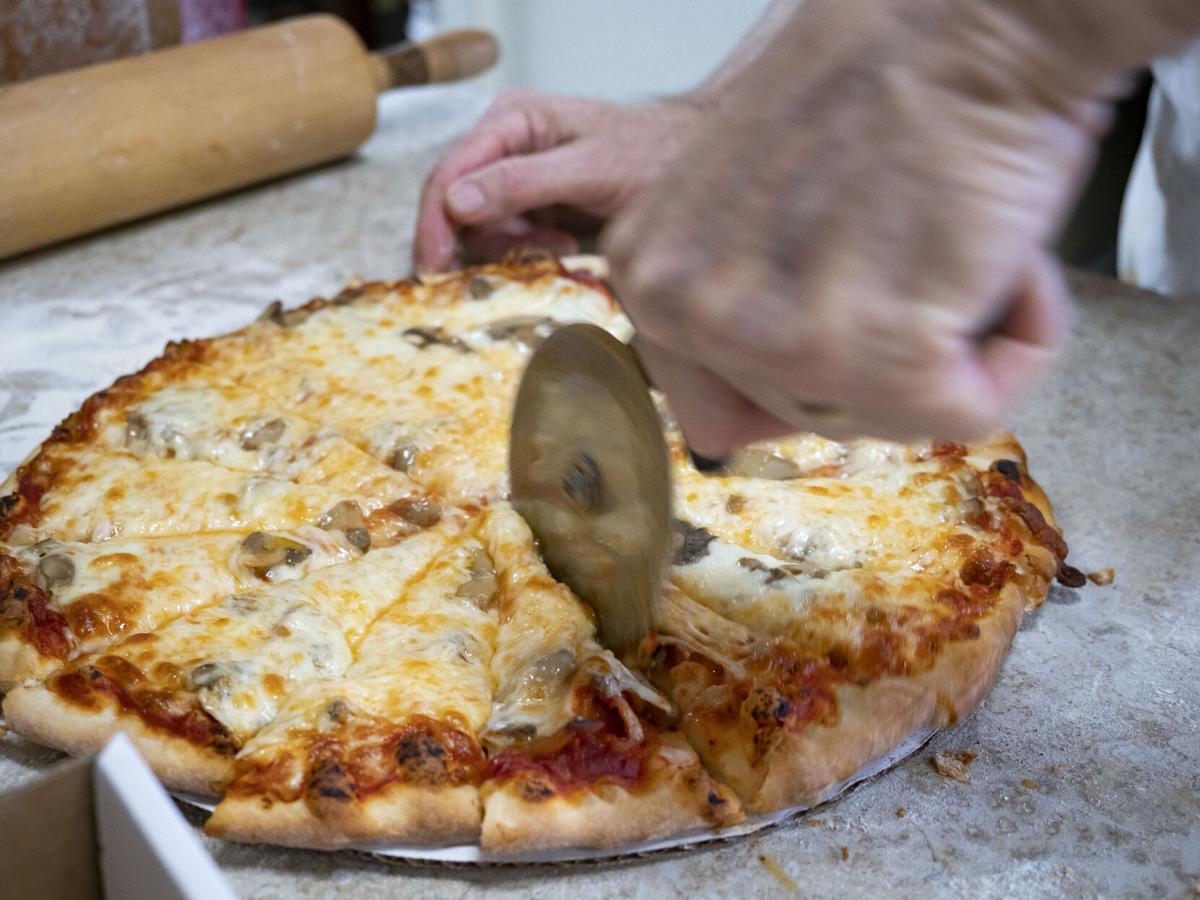 Randy Abel, of Wakarusa, sits at the counter at Cook's Pizza in Wakarusa.

WAKARUSA — Brothers Stan and Steve Cook were mere teenagers when they went into business together, opening Cook’s Pizza.

After 50 years, little has changed, including the camaraderie they have with each other and their customers.

The Elkhart natives began working together while still in high school at their aunt’s and uncle’s ice cream shop — Ray’s Ice Cream in Elkhart. It was because of that job that they stumbled upon what has since become a cornerstone business in Wakarusa.

Steve shared that they were delivering ice cream to what was, at the time, L&M Dairy.

“They’d only been open about three months and we said, ‘hey, we might be interested in buying this place if you ever think of selling’ and they called the next day,” he said. “I was a senior in high school with a couple of weeks to go and not sure what I wanted to do, and I always liked pizza and ice cream.”

Steve said he believed they purchased the inventory for about $4,000 and rented the building at first, but eventually bought it when the dentist who had an office upstairs retired.

“It was almost like it was supposed to happen,” Steve said. “The first week we were here the gentleman next door — Floyd Drake of Drake’s Jewelers said, ‘You’ll never regret coming to Wakarusa.’ And he was right.”

Older brother Stan said they opened Aug. 1, 1971. When asked what they’ve done to commemorate the anniversary he said, “We bought T-shirts and sold them at cost — we didn’t really offer any promotions.”

When asked about any disasters that might’ve taken place over the years, Stan referred to a previous article in The Goshen News written by Amy Wenger on their 25th anniversary.

In that article Wenger described a fire that “ravaged the downtown square in the winter of 1994,” including Cook’s Pizza. Stan was quoted as saying, “We were fortunate to have only been shut down for a couple of days,” but apparently the smell of smoke lingered in the storage areas for months.

Stan said the pandemic has been, “challenging but we’ve been very fortunate.”

“Our customers have been very understanding and very patient the last two years,” he said. “The customers made it happen (for us).”

He expressed frustration with what he believes is some people’s lack of wanting to work — especially since a vaccine has been available.

“I feel bad for young families with young children who can’t afford child care, but I’m not sympathetic with people who are capable of working but who’ve developed lethargy,” he said.

Stan said he now has two granddaughters working at the restaurant and Steve has a grandson who works there.

NorthWood Middle School is nearby and Stan said coaches and parents often buy pizzas for the teams. He is also glad Cook’s is a place where the kids can walk to.

Steve said so much has happened in the restaurant over the years.

“I met my wife here,” he said. “Doc Abel was our family doc for years, we met Gale Sayers and when President Obama was here the motorcade went past and they said ‘don’t be surprised if he stops in, he loves ice cream — wouldn’t that have been something to have a president here?”

Tom England and Carl Cook — the brothers’ cousin — stopped in for a cheese pizza and some good natured bantering. While Carl never worked at Cook’s, England said they once changed the sauce for him based on his suggestions.

England said he’s been patronizing the pizza place for more than 30 years, and it’s the cheese pizza that keeps him coming back.

Steve was asked about that and he laughed.

“We’ve always gotten along pretty well,” he said. “Stan’s the oldest of six kids and I’m the second oldest.”

As for things not changing, he said; “A couple of businessmen have said ‘if it works, don’t ever change’ — I guess it’s working.”

Carl recounted a recent time when he picked his 10-year-old granddaughter up from dance class, and she really wanted a shake, but everything in Nappanee was closed.

“It was around 10 and I saw Steve in the back working, so I called and asked him if he wanted to make my granddaughter happy and make her a shake,” he laughed. “He said sure, and I made her dance for him.”

That kind of special treatment is not reserved for family as the brothers recalled times when they made something special for a customer or delivered to an elderly customer.

Dreama Jensen was lunching with Esther George, who said she liked “everything” about Cook’s.

“It’s the best,” Dreama said. “I drive all the way from Elkhart for the pizza and then they make me little ones for my freezer.”

It’s that kind of customer care that’s kept Cook’s in business, and when asked about retirement both brothers responded, “it’s one day at a time,” and there’s no plans anytime soon.

“We’re not going for 75 or 100 (years) but there’s no plan to retire,” Stan said. “We see an opportunity to do what we’ve been doing and until someone steps forward and wants to do it like we do it — we’ll be here.”