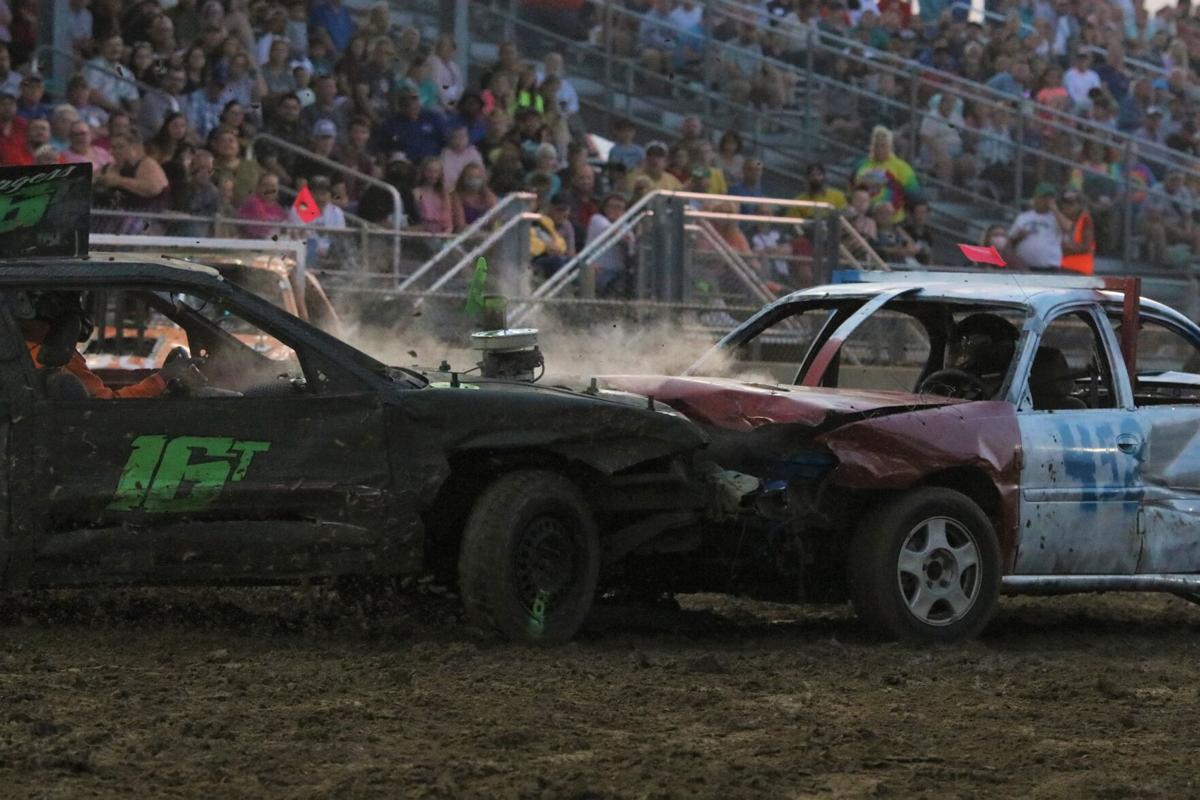 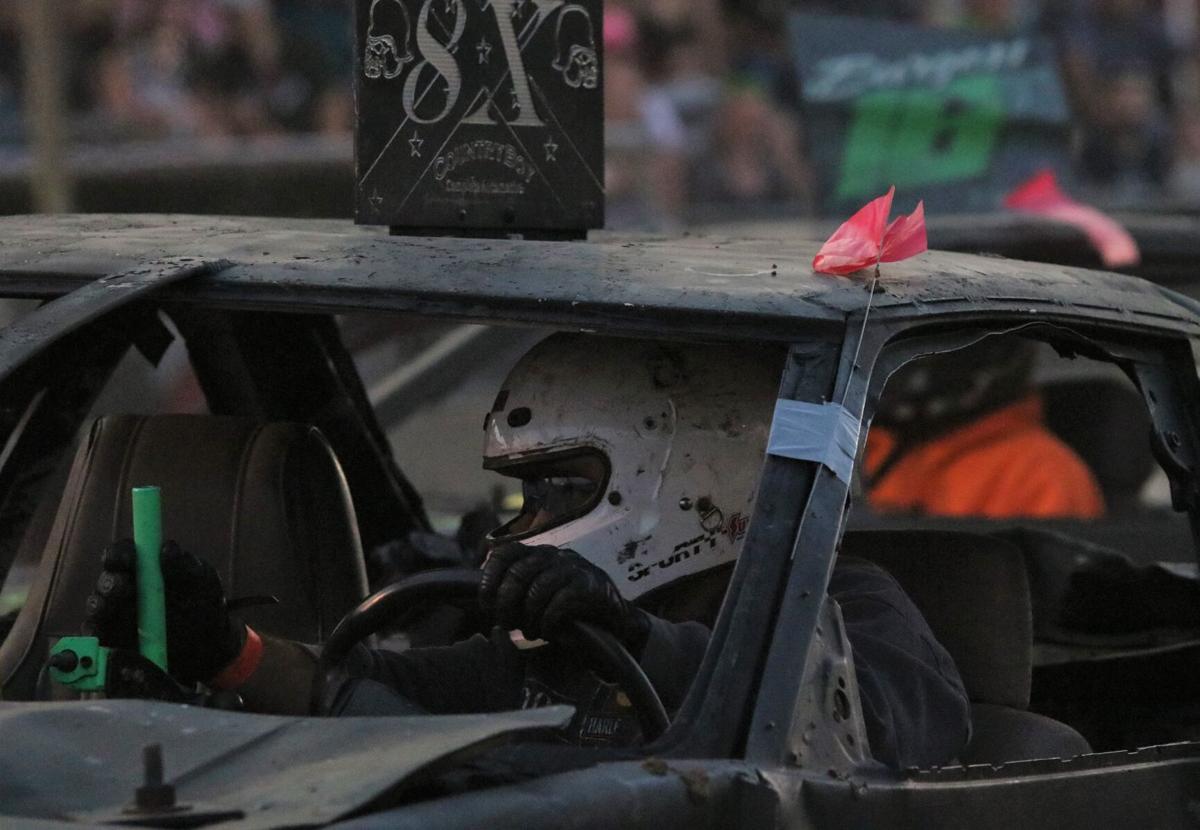 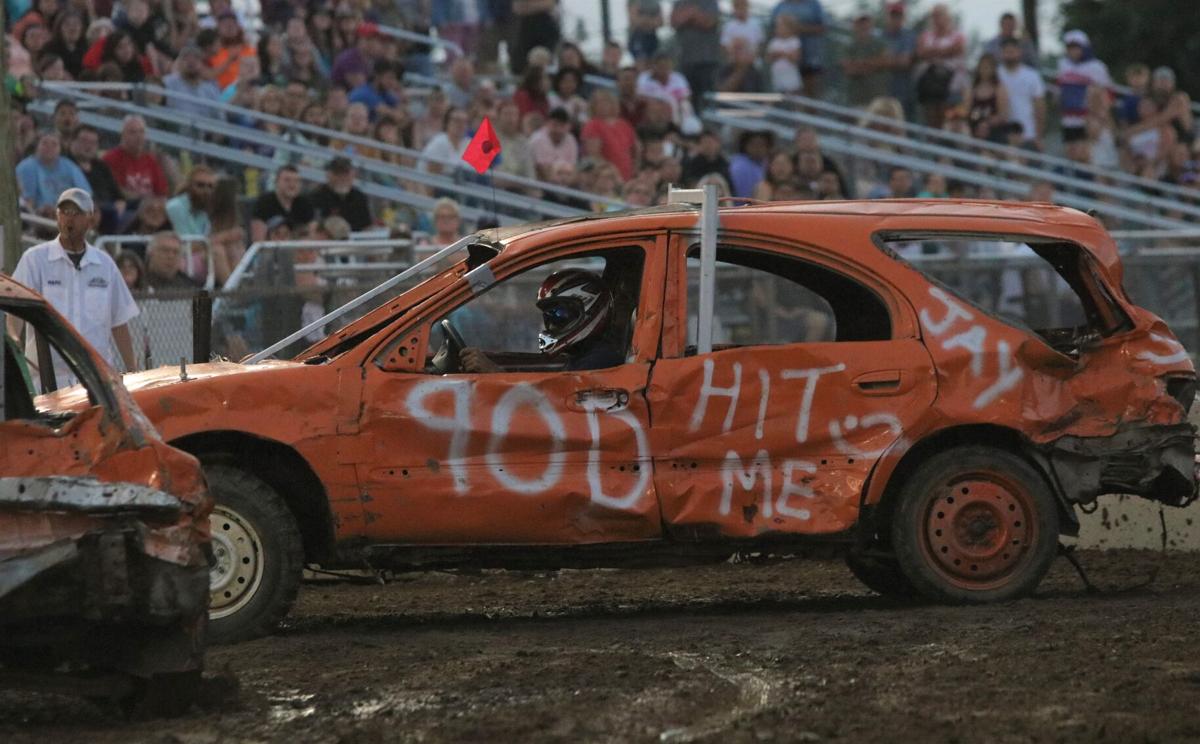 Warsaw’s Kunal Dahiya prepares for impact during Saturday night’s demolition derby at the Elkhart County 4-H Fair in Goshen. This was the India native’s first time in any demolition derby. 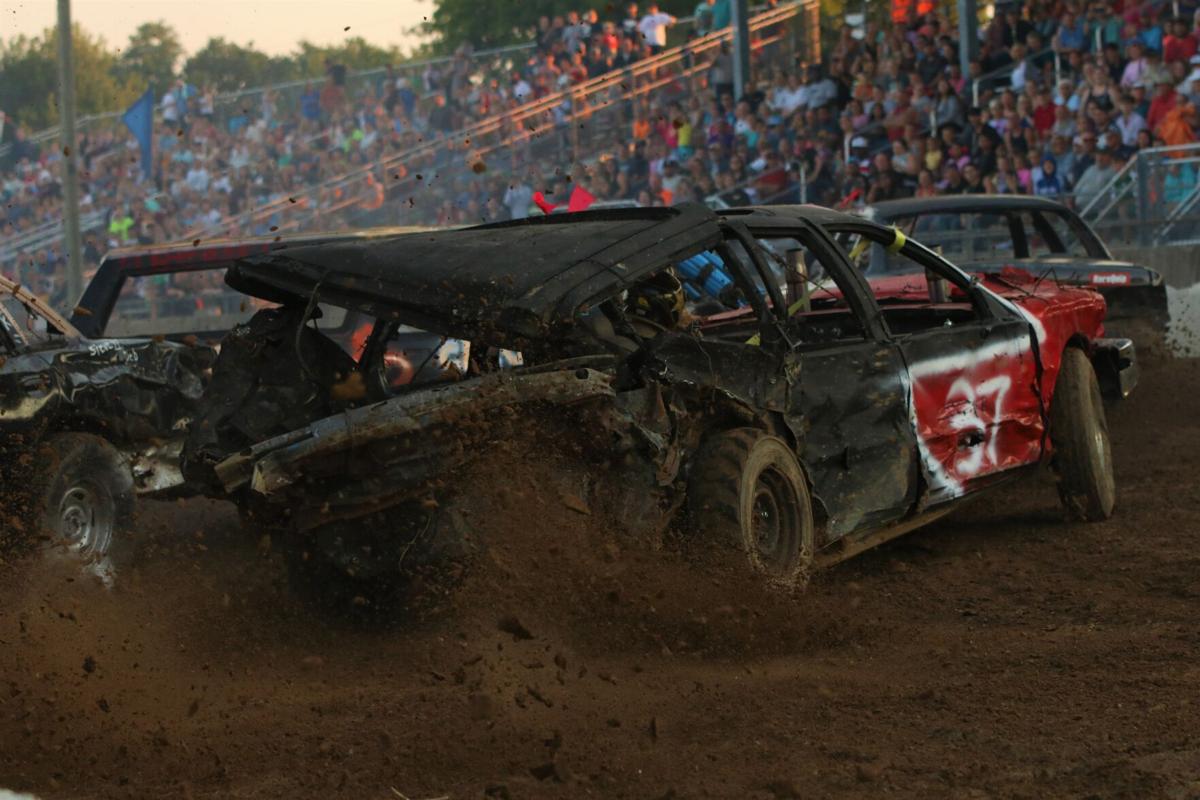 Kendallville's Samuel Dikhm (#37) swings around after being hit in the full wire heat during Saturday night's demolition derby at the Elkhart County 4-H Fair in Goshen. 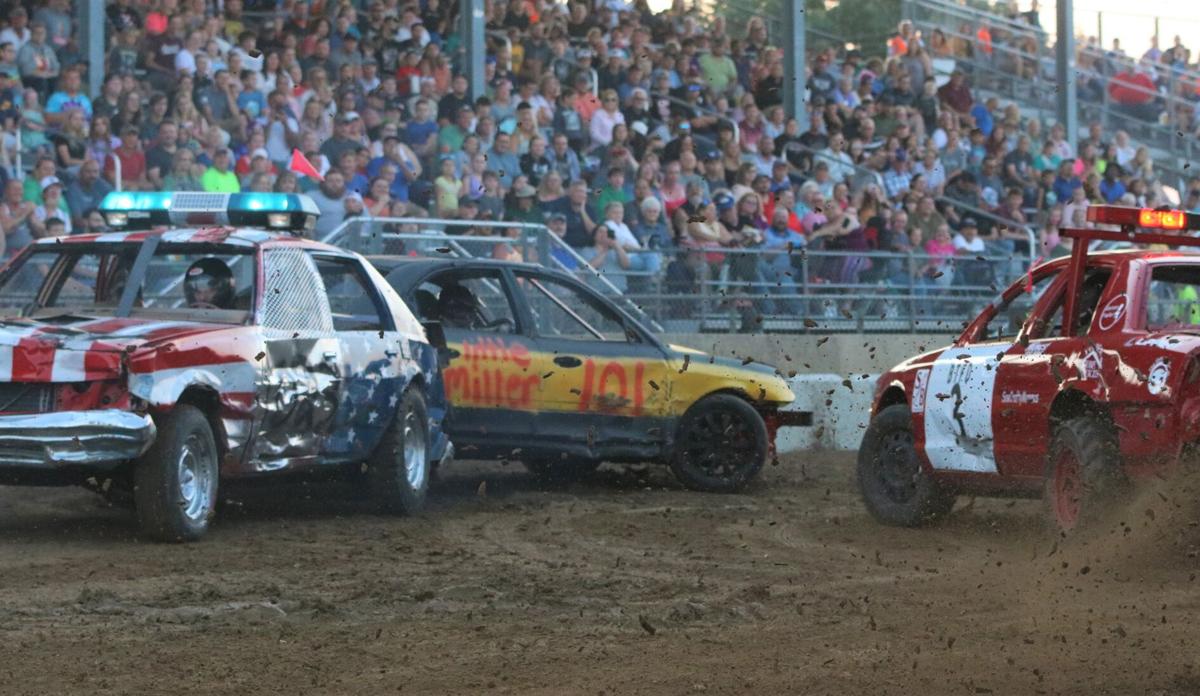 Nate Galloway (#3), of the Benton Fire Department, aims for the #101 car during Saturday night’s demolition derby at the Elkhart County 4-H Fair in Goshen. Galloway would go on to win the fireman heat. 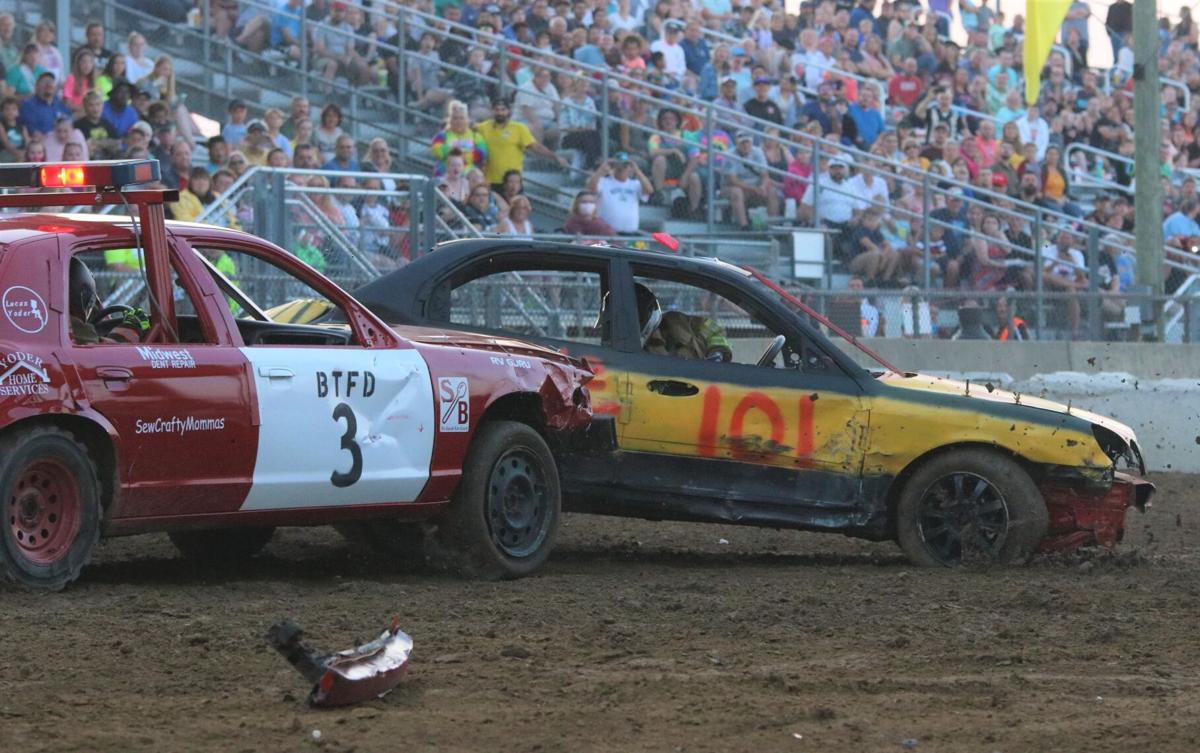 Nate Galloway nails the back of the #101 car in the fireman heat during Saturday night's demolition derby at the Elkhart County 4-H Fair in Goshen.

Warsaw’s Kunal Dahiya prepares for impact during Saturday night’s demolition derby at the Elkhart County 4-H Fair in Goshen. This was the India native’s first time in any demolition derby.

Kendallville's Samuel Dikhm (#37) swings around after being hit in the full wire heat during Saturday night's demolition derby at the Elkhart County 4-H Fair in Goshen.

Nate Galloway (#3), of the Benton Fire Department, aims for the #101 car during Saturday night’s demolition derby at the Elkhart County 4-H Fair in Goshen. Galloway would go on to win the fireman heat.

Nate Galloway nails the back of the #101 car in the fireman heat during Saturday night's demolition derby at the Elkhart County 4-H Fair in Goshen.

GOSHEN – This year’s edition of the Elkhart County 4-H Fair finished up with a bang in more ways than one on Saturday night.

The demolition derby, hosted by Sarge and Sons of Zanesville, Ohio, saw cars get smashed into a pulp throughout the two-hour event that featured six heats of hard-hitting action.

At times, the roars of the sold out crowd could be heard over the ear-piercing revs from the derby vehicles that filed in one-by-one in front of the grandstands.

Some of the area’s bravest put their beat-up hunks of oversized metal to the test for both bragging rights and a little extra cash in their pockets.

With everyone’s ears still ringing from the derby, the night was capped off with an awe-inspiring fireworks display that put a figurative bow on this year’s fair.

A SPECIAL DERBY FOR BURGESS

For a majority of the participants in the derby, the one at the fairgrounds holds a lot of sentimental value due to it being so close by.

A large number of this year’s drivers hail from Elkhart, including 35-year-old Terry Burgess. Burgess has been a derby driver for over 20 years, and he’s been going to the one at the fairgrounds for many, many years.

“I was born into it,” said Burgess of the derby. “My grandfather and my two uncles ran. My grandpa owned a salvage company and my uncle owned a towing company. So I started stripping cars for them pretty early on. I ran my first derby here back in 2001, and I’ve been doing it ever since. It’s got me hooked.”

Burgess owns Torch Inc., an auto repair shop in Elkhart, which is where he spends a lot of his time fixing up the derby cars among other things. Getting a car ready for a derby requires a lot of time and effort, and there are several key factors that have to go just right to be the last one standing at the end.

“Believe it or not, there is a strategy to this stuff,” Burgess said. “There’s a lot of luck involved, but there’s definitely a strategy to it. Good wheel shocks are what you want. Shocks will break your suspension, break your axles. … It takes lots and lots of time to get these cars to hold up. The amount of time alone, you have to have the heart for it. To build cars like this, I probably have over 200 hours into each build.

“I always tell everyone who asks me for advice that the most important thing is to make sure it runs good. Because it doesn’t matter how strong it is, if it doesn’t run good, you’re wasting your time.”

Burgess runs in three to five derbies a year, and while he’s won others in the past, his 1996 Pontiac Grand Prix led him to his first victory at the fair on Saturday night.

“It hasn’t really set in yet,” said Burgess of the win. “And to do it in front of this crowd is amazing. Out of the hundreds of derbies I’ve competed in, this is the biggest and best one there is. … Sometimes I ask myself why I do this, but that crowd right there makes it worth it.”

What made it even more special for Burgess was getting a chance to finish first and second in the six-cylinder weld heat with his friend Adam Rink.

Rink’s been a regular derby driver for two decades as well, and he and Burgess have been friends since elementary school.

“Both of us worked on these cars to get them ready for this derby up at his shop,” Rink said. “I don’t do as many as he does, but I enjoy it. I like wrecking cars, and I don’t do it for the money or a trophy. It’s just a lot of fun.”

FROM INDIA TO THE DEMOLITION DERBY

As cars for the fourth heat of the night drove into the arena one after the other, one derby vehicle in particular stood out. An orange 1995 Ford Taurus Wagon with the words “Indian Hillbilly” spray painted on the side was unique, and the story of the driver made it even more so.

Nearly 8,000 miles away from his native India, 29-year-old Kunal Dahiya raced in his first-ever derby on the last night of the fair.

Although he didn’t win, the experience was one he won’t soon forget.

“I have a friend I work with, and he does these derbies,” Dahiya said. “I hung out with him one night, and I found out he derbied, so I just came to watch him one night. This year, we started building cars together, and he asked me if I wanted to give it a try. At first I was like I don’t know, it looks scary. But then they told me they had a car for me, so I just said hell yeah, let’s do it. What’s there to lose?”

Dahiya’s car ended up being one of the first cars knocked out, but that didn’t matter to him. He was just happy to have the opportunity to put himself, and his car on the line.

“It was a lot of fun,” he said. “For my first derby, I got shook up pretty good. I still kind of have butterflies going through my stomach. … I was so nervous. The track didn’t have a lot of water in it either, so it was fast. I didn’t expect it to be that way. I was scared because of that. I was like ‘I’m going to die tonight.’”

After it all, Dahiya was happy with the way he held his own in the arena, and more derbies may lie ahead for him in the future.

“Definitely, definitely,” said Dahiya of doing more derbies. “My car’s pretty beat up, so I’ll have to score some more. But it took a whole lot of guts to come out here, because they’ve been asking me to do this for a while. I’m just glad I did it.”