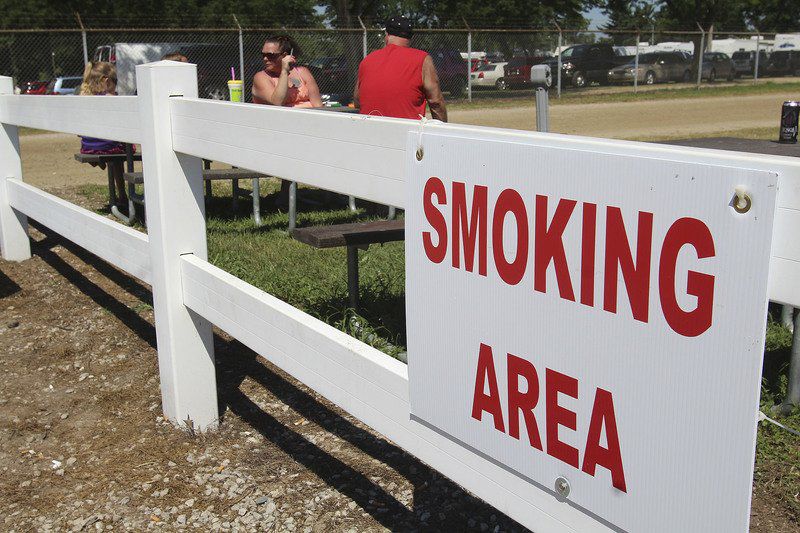 JULIE CROTHERS BEER | THE GOSHEN NEWSA sign is used to designate one of two smoking areas on the Elkhart County 4-H Fairgrounds. 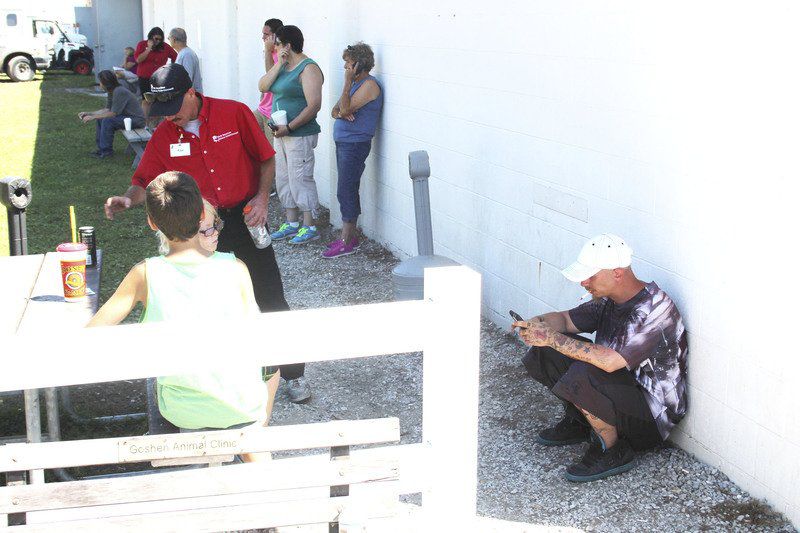 JOHN KLINE | THE GOSHEN NEWSGoshen resident Randy Cottey, right, puffs on a cigarette while looking at his phone during a visit to one of the Elkhart County 4-H Fair’s designated smoking areas Wednesday afternoon. 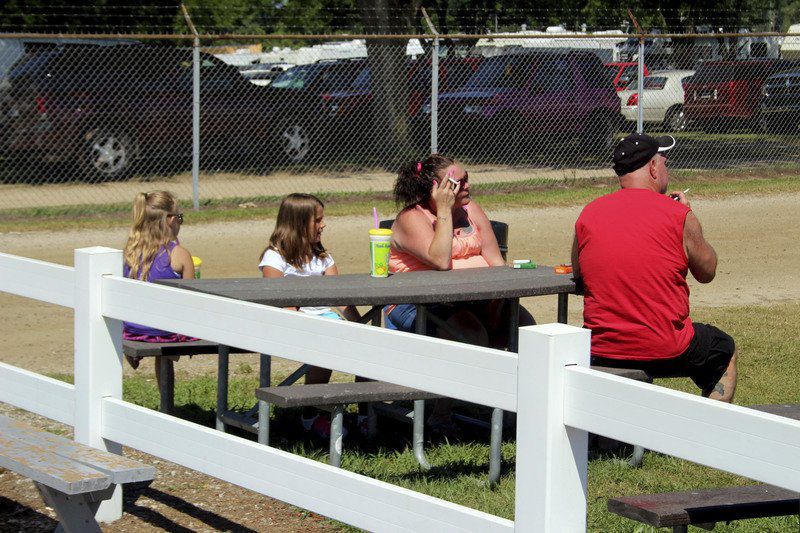 JULIE CROTHERS BEER | THE GOSHEN NEWSA sign is used to designate one of two smoking areas on the Elkhart County 4-H Fairgrounds.

JOHN KLINE | THE GOSHEN NEWSGoshen resident Randy Cottey, right, puffs on a cigarette while looking at his phone during a visit to one of the Elkhart County 4-H Fair’s designated smoking areas Wednesday afternoon.

GOSHEN — Wednesday was Tobacco Free Day at the Elkhart County 4-H Fair, a time for highlighting the fair’s general non-smoking policy while also thanking the fair’s smoking patrons for acknowledging and adhering to that policy.

Started several years ago as part of the fair’s Kids’ Day health education activities, Tobacco Free Day took on special meaning in 2011 when severe drought conditions forced the fair board to adopt a fair-wide non-smoking policy save for a few designated smoking areas located in out-of-the-way areas on the outskirts of the grounds. Before the restrictive smoking policy was enacted, smoking had been allowed nearly anywhere on the fairgrounds other than the livestock barns, where smoking was seen as a potential fire risk due to the presence of straw, sawdust and other flammable materials.

“It was so dry during the drought, and if you looked at the aerial photos of our fairgrounds, we were just brown,” said Kristy Ambrosen, marketing coordinator for the Elkhart County 4-H Fair. “So we started the smoking areas to try and cut down on the risk of fire, and then we also had just a lot of cautious provisions about watering the grasses out by the rides and the barns and all of that. And ever since then, we’ve kept the smoking zones going, because our public really appreciated it.”

“We really appreciate those who are smokers and who acknowledge the fact that not everyone wants to be around it, and who choose to use the special areas in out-of-the-way places just so the kids and families that might not want to breath in that smoke can enjoy their time at the fair as well,” Ambrosen said.

Bob Zell, president of the 2016 Elkhart County 4-H Fair Board, said the board has reduced the number of designated smoking zones at the fair in the years since they were first implemented due in large part to what he sees as a shift among the general public away from the smoking of tobacco products.

“We’ve limited the smoking areas, and personally I think in the near future, or at least sometime in the next several years, we’ll eventually go to a smoke-free fair,” Zell said, though he was quick to note that no formal discussions on the matter have taken place to date, though the topic has arisen from time to time. “I’d definitely like to see it, but this is something that would have to be voted on by the entire fair board. I know we may lose a few guests hear or there because of it, but I think overall it would be a good thing for the fair.”

In the meantime, Ambrosen said she has been very pleased with the public’s utilization of the designated smoking zones, with little to no issues reported since their implementation five years ago.

“We really haven’t heard of any real problems with smoking at the fair in the recent past, and I’d say our visitors who smoke have really been accommodating when it comes to the designated smoking areas,” Ambrosen said. “We literally have thousands of people that live here during the fair week, from your campers, to your people who work in the concession booths, to the people who work in the carnival area, etc. Many of them are here pretty much 24/7 during the fair, and for those who are smokers, most acknowledge the fact that they can find locations where they can smoke, and we’ve had no problems with that at all.”

Lisa Lambert, a South Bend resident taking a smoke break at one of the fair’s designated smoking areas Wednesday afternoon, said she personally has no issue with the fair’s policy of limited smoking zones and is happy to oblige.

“I’m cool with it,” Lambert said of the policy.

Elkhart resident Mike Macmillan, puffing on a cigarette next to Lambert, agreed.

“It doesn’t bother me,” he said. “I’m just glad they still let us smoke somewhere.”