GOSHEN — The new steps taken may be somewhat slow, but they are progressing in a journey by three Goshen men to erect a visible reminder of the city’s history with institutionalized racism. That history, they argue, must be acknowledged in order to forge a more welcoming and inclusive community in the present and future.

Dan Shenk, a business owner and former reporter, attorney Lee Roy Berry and former mayor Allan Kauffman want to place a historical marker with a message that states Goshen operated as a so-called “sundown town” through much of the 20th century. The push for a marker builds from an effort led by Shenk and Berry, which resulted in the City Council passing a resolution in 2015 that admitted Goshen was a “sundown town” with practices that prevented people of color from being in the city limits after dark.

Shenk, Berry and Kauffman pitched their idea to the Goshen Ministerial Association on Wednesday, headlining the group’s November meeting.

“Wouldn’t it be therapeutic for a sign to be placed in Goshen or near Goshen testifying to the fact that people of this town acknowledge this past, but they also acknowledge there’s a potential future and an aspiration which is intrinsic in the meaning of the United States and what it stands for,” Berry said.

During the meeting, held virtually with each participant appearing online via streaming video, Kauffman explained there’s been discussion about possibly seeking to have a marker set up on a side lawn of Goshen City Hall.

“I think it is important to acknowledge what we have been and what we should be in the future,” Kauffman said.

Shenk described how the ball got rolling on the idea. He said that after the City Council passed the “sundown” resolution in March 2015, he, Kauffman and others had talked about holding a walk to celebrate the passage. But while the walk didn’t happen, the idea for a marker germinated from those discussions, he said. 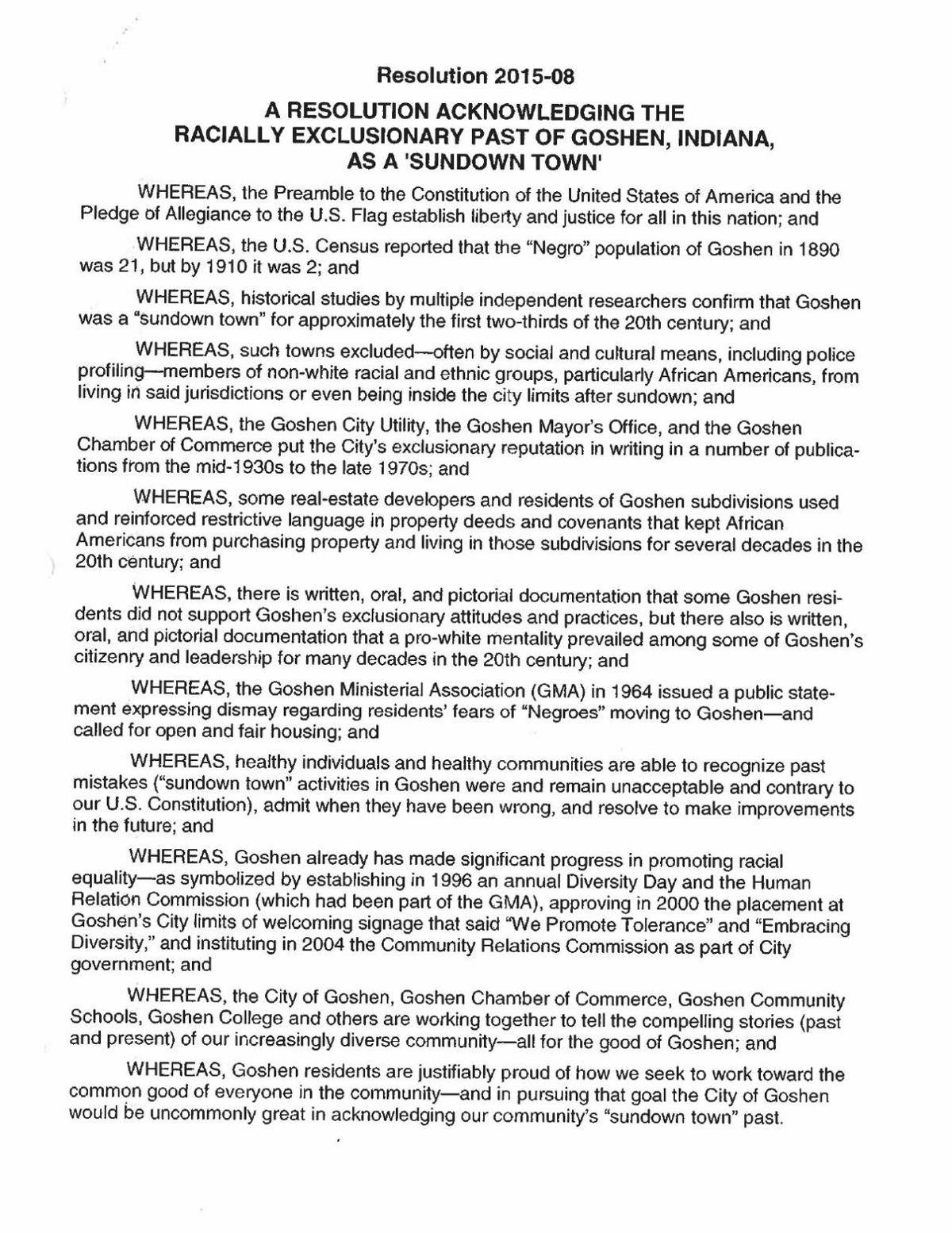 Shenk said the marker idea came back to him last year after hearing about a similar memorial established in Georgia. He said he met with Kauffman and Goshen Mayor Jeremy Stutsman about it; researched costs for a two-sided marker, which could run from $2,000 to $5,000; and he raised about $600 in pledges.

“I think having a historical marker would be part of telling Goshen’s story and telling it honestly even if it’s painful,” Shenk said after Wednesday’s meeting.

Then in March, almost exactly five years after the “sundown” resolution was passed, Shenk said he, Berry and Kauffman proposed establishing a new marker to the city Community Relations Commission. He said the panel voiced support for the marker, with ideas on the message’s wording. He also said Stutsman spoke with them informally after the CRC presentation to consider setting up a new meeting on the next steps and indicated there was money budgeted for historical markers.

But, Shenk pointed out, the COVID-19 pandemic became a local emergency a short time later, and the idea was shelved for the past several months, until a few weeks ago. He said Stutzman emailed him that he’s ready to move forward with the idea and form a small committee.

“I am in full support of finding a location, working on the layout and wording, and installing a sign that acknowledges a dark part of our history. It is important to remember these moments to help ensure we learn from them,” Stutsman said in a statement to The News. “Goshen has a very rich diversity that we can all benefit from. Our differences and our diversity should not drive us apart, acknowledging and talking about them will pull us together. It’s how we grow and succeed. It can be tough but it’s how we lead.”

To the ministerial association, Shenk displayed two proposed messages for the sign — a longer one that includes the names of those who supported the 2015 resolution, including the City Council members who voted for it, and a shorter one that removes the names.

His proposed text states how Goshen was a “sundown town” for most of the 20th century; describes the practice, including that city leaders used racist language for decades; that the city passed the resolution in 2015 and may have been the first of about 10,000 communities to make a public statement about past “sundown” practices. Shenk said a key line on the sign would feature the resolution’s final nine words: “It happened, it was wrong, it’s a new day.”

“The idea of having a ‘sundown town’ historical marker in Goshen occurred to some of us long before the spring and summer of 2020 when George Floyd’s killing in particular — and subsequent massive interracial protests — galvanized the world regarding racial injustice. I believe that taking such a step in Goshen has taken on even more significance in light of those events,” Shenk stated in a follow-up email.

GMA members expressed support for the marker at the end of Wednesday’s meeting. The approval remained in line with the group’s apparent backing of the 2015 resolution, as well as a statement made in 1964 that was dismayed by fear of Black residents and called for fair and open housing.

Shenk seemed a little uncertain about what comes next in the process to establish the marker, which he hopes will be placed at City Hall. He said several steps need to be taken, including working with Stutsman to find a time and appropriate way to form the committee he referenced.