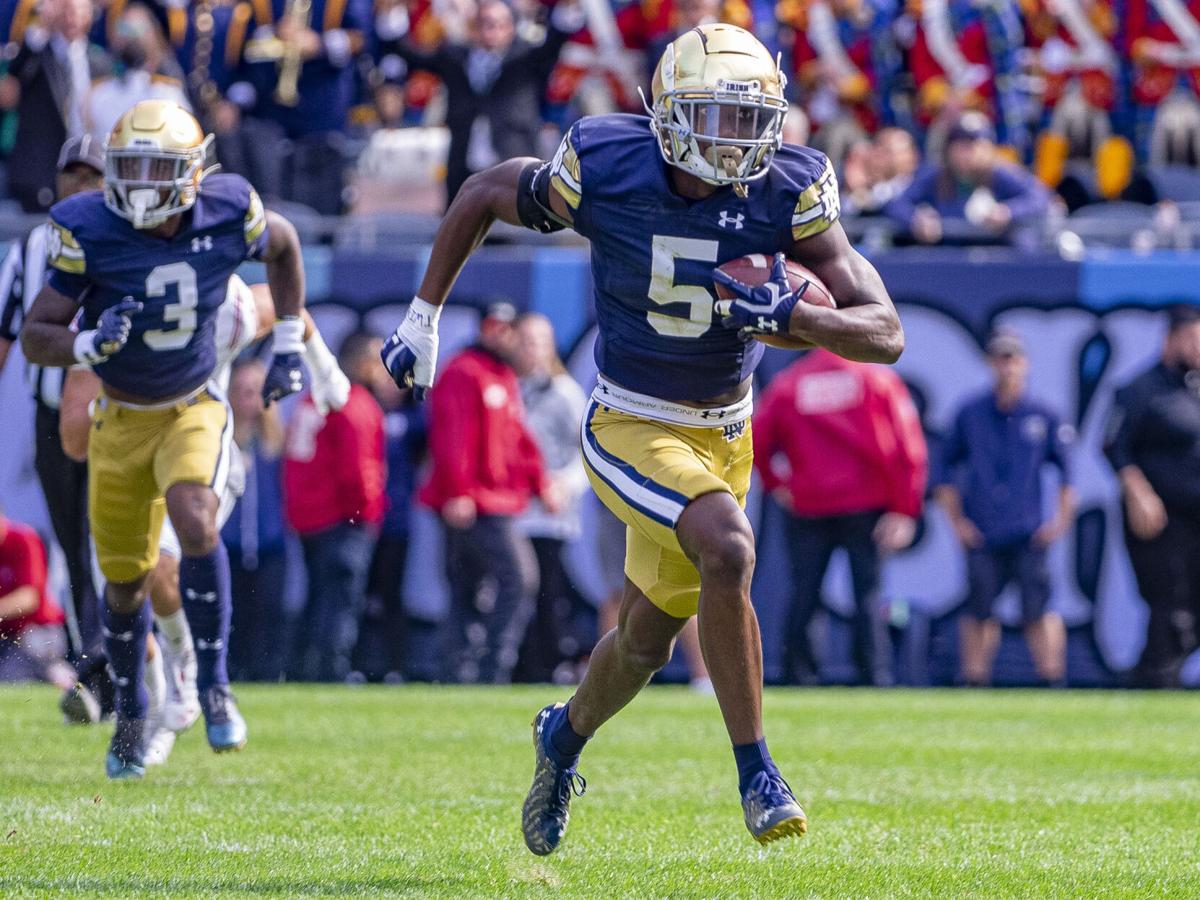 Notre Dame cornerback Cam Hart (5) runs with the ball after making an interception during Saturday’s game against Wisconsin at Soldier Field in Chicago. 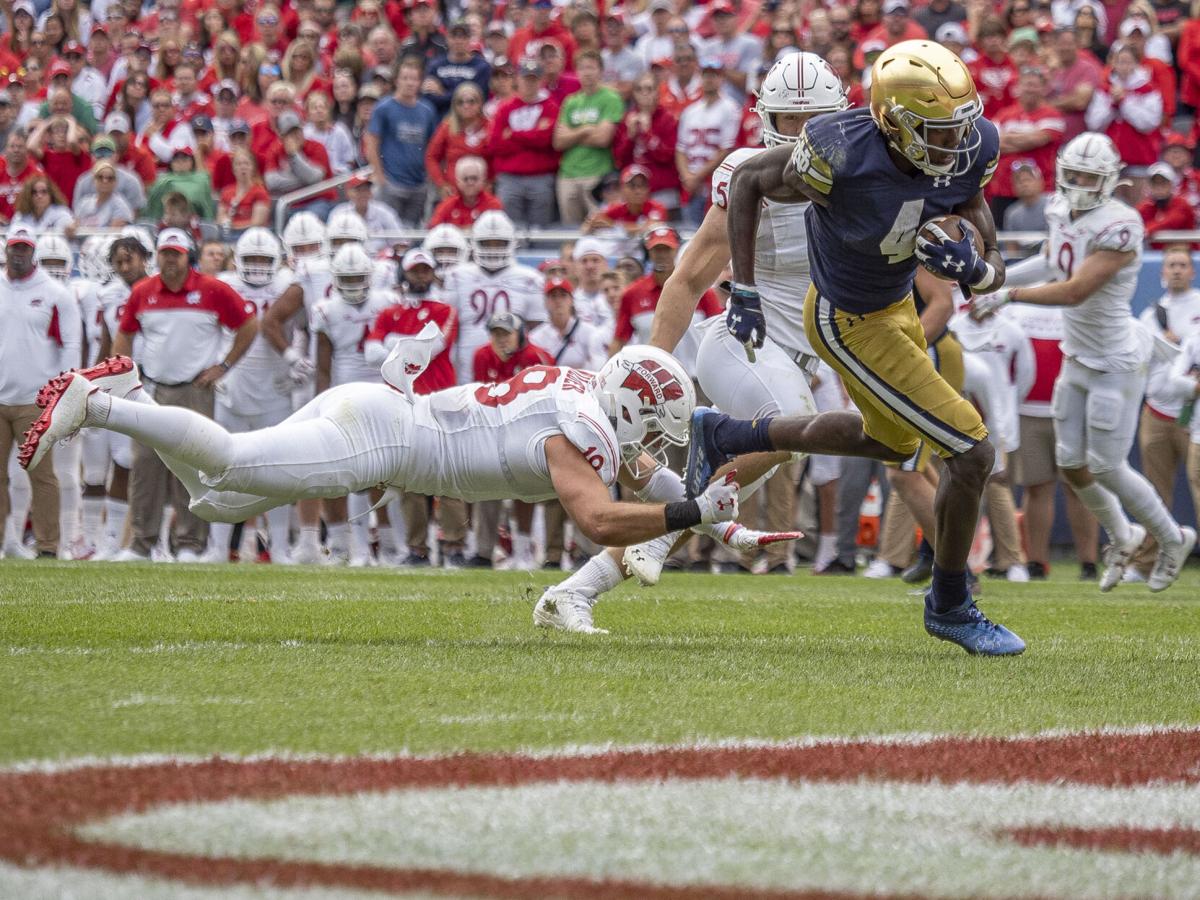 Notre Dame wide receiver Kevin Austin Jr. (4) catches a pass and runs in for a touchdown against Wisconsin safety Collin Wilder (18) during Saturday's game at Soldier Field in Chicago. 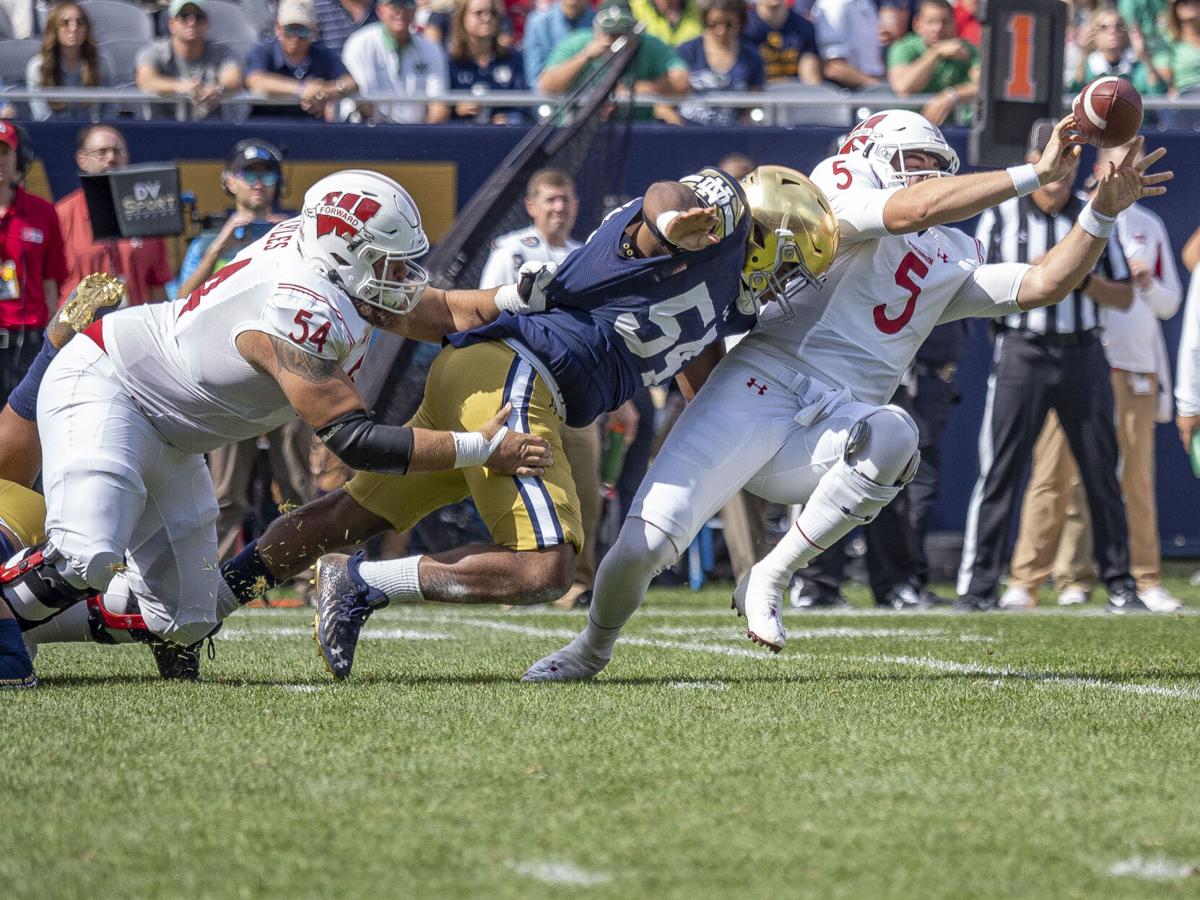 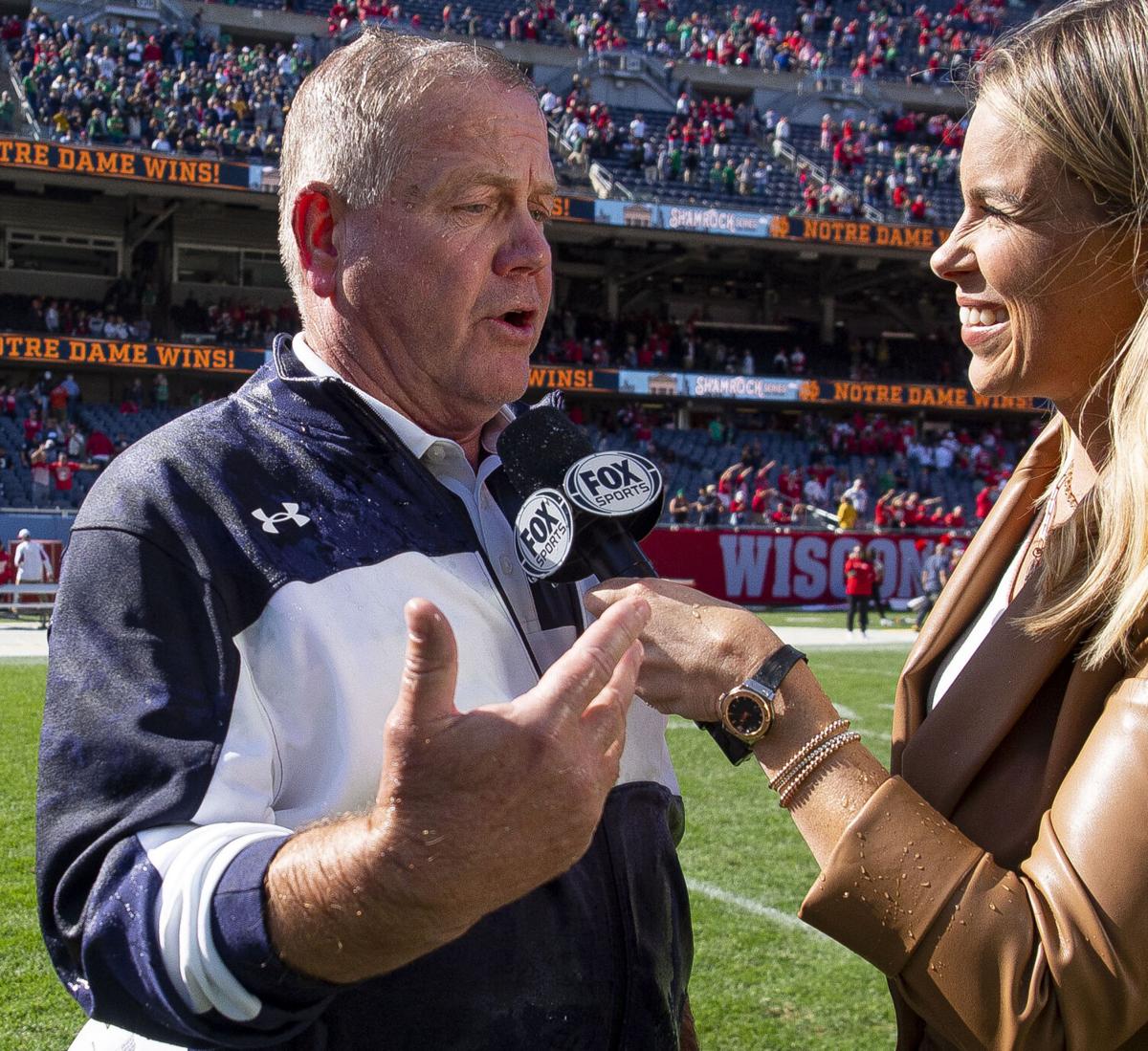 Notre Dame head coach Brian Kelly is interviewed during Saturday's game against Wisconsin at Soldier Field in Chicago. Kelly now has the most wins for a head coach in Notre Dame football history with 106 wins. 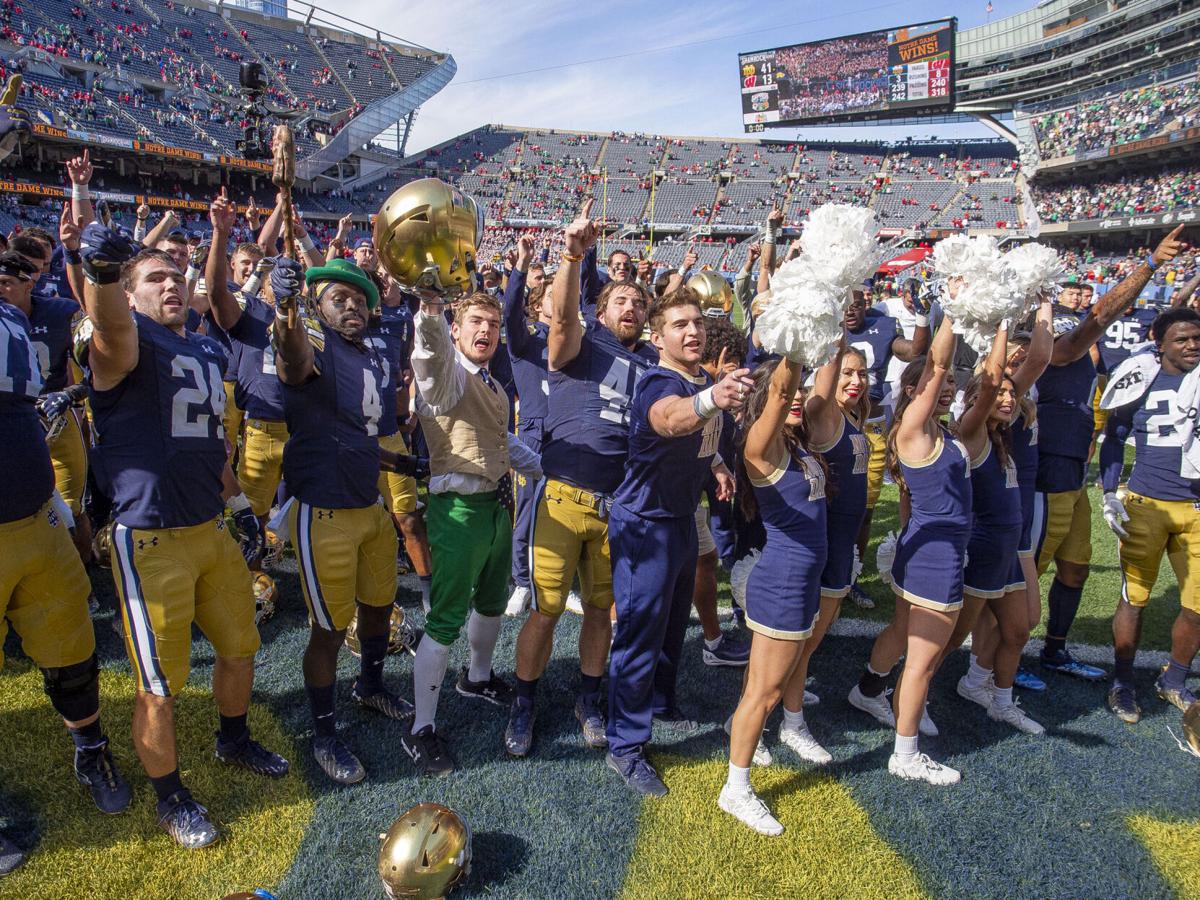 The Notre Dame football team celebrates after Saturday's game against Wisconsin at Soldier Field in Chicago. Notre Dame is now 4-0 on the season.

Notre Dame cornerback Cam Hart (5) runs with the ball after making an interception during Saturday’s game against Wisconsin at Soldier Field in Chicago.

Notre Dame wide receiver Kevin Austin Jr. (4) catches a pass and runs in for a touchdown against Wisconsin safety Collin Wilder (18) during Saturday's game at Soldier Field in Chicago.

Notre Dame head coach Brian Kelly is interviewed during Saturday's game against Wisconsin at Soldier Field in Chicago. Kelly now has the most wins for a head coach in Notre Dame football history with 106 wins.

The Notre Dame football team celebrates after Saturday's game against Wisconsin at Soldier Field in Chicago. Notre Dame is now 4-0 on the season.

CHICAGO — Early in the fourth quarter, the momentum belonged to Wisconsin.

Mere minutes after Badger fans jumped around wildly at the end of the third, Wisconsin kicker Collin Larsh put his team ahead 13-10 with a 27-yard field goal. With Notre Dame starting quarterback Jack Coan injured and a rigid Badger defense ready to dig back in, things looked bleak for the No. 12 Fighting Irish.

That was until one of the fastest players on the team was given a chance to make a play.

During the ensuing kickoff, Notre Dame running back Chris Tyree cut back toward the middle of the field and found a crease. He hit the hole and outran the rest of the Wisconsin defenders on his way to a 96-yard touchdown.

That score helped pave the way for an Irish-dominated quarter that saw Notre Dame rattle off 31 unanswered points on the Badgers during a 41-13 blowout victory over No. 18 Wisconsin at Soldier Field.

“I’m so proud of their resilience,” said Notre Dame head coach Brian Kelly of his players. “We knew what this game was going to be about. It was going to be close, hard-fought, physical, whatever cliché you want to use. We were challenged by their (defensive) front. We knew we were going to have to throw the football around. That was the game plan. … We were able to win this thing going away by playing complete football. Defensively, taking the ball away, on special teams and then doing enough on the offensive side of the ball to secure a really good victory.”

The first half at a nearly sold out Soldier Field was an old-fashioned rock fight. The Wisconsin defensive line stopped any kind of running game the Irish tried to pursue, and Coan was sacked multiple times during the first two quarters.

The Notre Dame defense was there to pick up its offense by building off its performance against Purdue. Despite the loss of nose tackle Kurt Hinish in the middle of the defensive line, the Irish managed to hold the Badgers to only 17 rushing yards in the first half and 88 total yards during the first two quarters. This after Wisconsin had 532 rushing yards in its first two games combined.

“The coaches have challenged us week-in and week-out to be disciplined and play smart,” said defensive back Cam Hart, who had two interceptions on Saturday. “All camp we were electric. So I knew we could play better than how we had been playing. … This week, (the coaching staff) emphasized playing free and not thinking too much. I feel like we really did that and executed well.”

With less than five minutes left in the second quarter, the 3-3 tie would be broken behind the game’s first touchdown. Coan found wide receiver Kevin Austin Jr. open down the left sideline, and the senior did the rest on a 36-yard touchdown grab that put Notre Dame up 10-3 at the half. Austin Jr. did a great job of bouncing back from a bad performance last week in which he failed to register a catch.

“I’m always trying to be the guy to go in and make things happen for my team,” Austin Jr said. “The ultimate goal for me is to help my team win and to be a part of that. (Saturday) felt like a big step forward for myself and the rest of the team. … It’s just a great feeling.”

The Badgers — led by a struggling Graham Mertz at quarterback — tied the game at 10 early in the third on a four-play, 56-yard drive that ended with an eight-yard touchdown grab from wide receiver Kendric Pryor.

The rest of the third quarter saw Wisconsin turn it up to an even higher level on defense. The Irish only had 32 total yards on offense and gave up two sacks as well in the frame. Coan (15-of-29, 158 yards and a touchdown) suffered an injury during one of the sacks and had to sit out the rest of the contest.

With freshman QB Tyler Buchner still nursing a hamstring injury, backup quarterback Drew Pyne came in and took control of the offense. He made some mistakes — a fumble that setup Wisconsin with good field position early in the fourth — but overall, he went 6-of-8 for 81 yards and a touchdown in relief.

“We got clean x-rays and it’s a soft-tissue injury,” said Kelly of Coan. “And it doesn’t respond like a high-ankle sprain, so we’re pretty optimistic we’ll be able to see him back next week. … (Pyne) gets 40% of the reps now in practice. Not a lot of coaches do that. And Tyler wasn’t getting any reps this week, so we were able to focus a lot of the reps on Drew. When you see him prepare, you have that confidence to put him in the game.”

Pyne and the offense didn’t have to do much of anything after Tyree’s return put the Irish ahead. Besides a 16-yard touchdown pass from Pyne to Austin Jr. — his second of the contest — with 9:34 left in the game to make it 24-13, the defense contributed the remainder of the points.

Mertz, who struggled all afternoon, threw two interceptions that were returned for touchdowns during the final 2:13 of the game. The first came from Jack Kiser, who scampered 66 yards to pay dirt. The second came on a deflected pass that landed in the arms of linebacker Drew White. He’d maneuver his way 48 yards through traffic to add one last exclamation point to a huge victory for the Irish.

Mertz finished 18-of-41 passing for 240 yards, one touchdown and four interceptions Saturday.

With the win, Kelly made history by passing Knute Rockne as the all-time winningest coach at Notre Dame with 106 wins.

“I’m just glad it’s over with,” said Kelly of the record. “I’m proud of the accomplishment and the level of consistency from a winning standpoint. But I get more joy out of Drew Pyne going in there or Chris Tyree scoring on a kickoff return. That’s why I do this. You don’t do this for 31 years because you’re trying to beat Knute Rockne’s record.”

Now sitting at 4-0, 12th-ranked Notre Dame will clash with No. 8 Cincinnati (3-0) at Notre Dame Stadium next week, Oct. 2, as the Irish go for two straight victories over ranked opponents.

No. 12 Notre Dame ran away with a 41-13 victory over No. 18 Wisconsin Saturday at Soldier Field in Chicago. Here are some of the images from t…