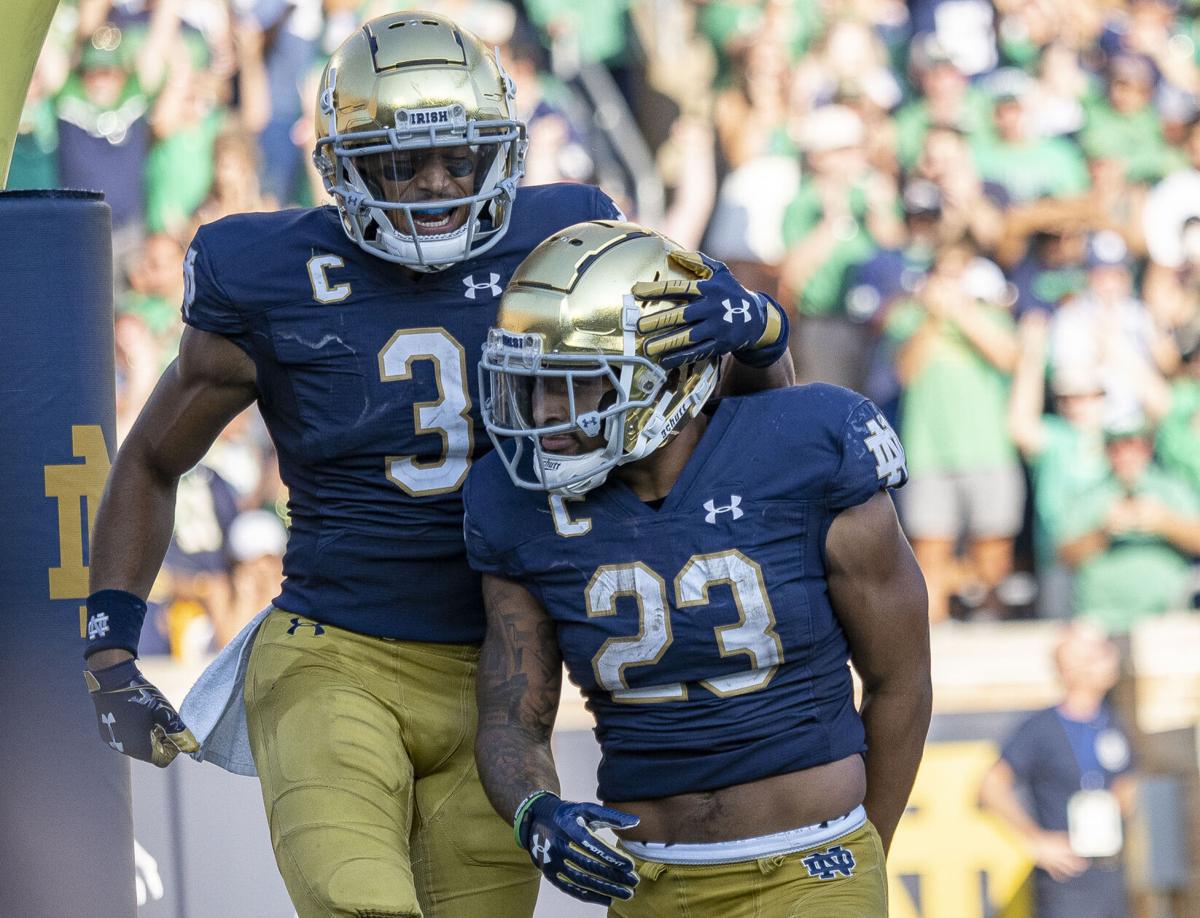 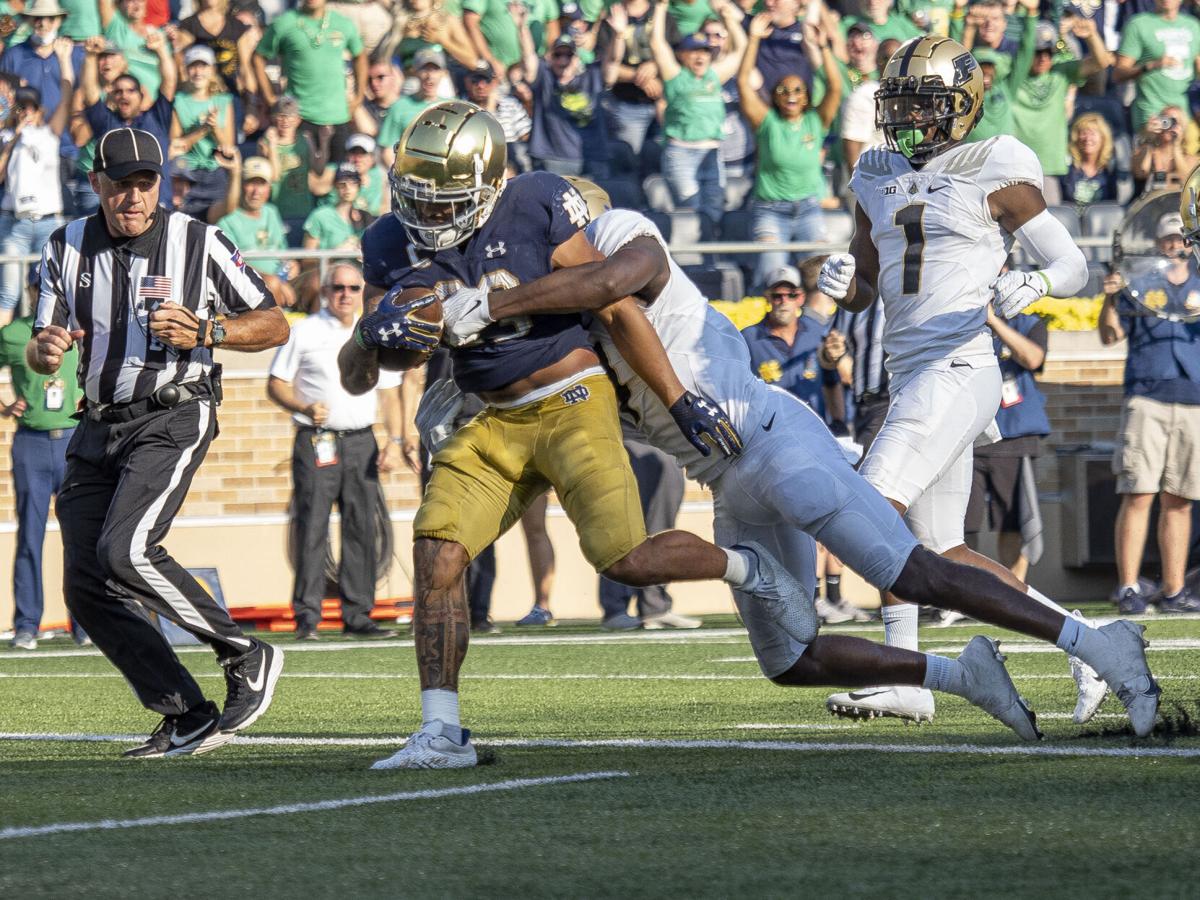 Notre Dame running back Kyren Williams (23) scores a touchdown in the fourth quarter against Purdue Saturday at Notre Dame Stadium in South Bend. 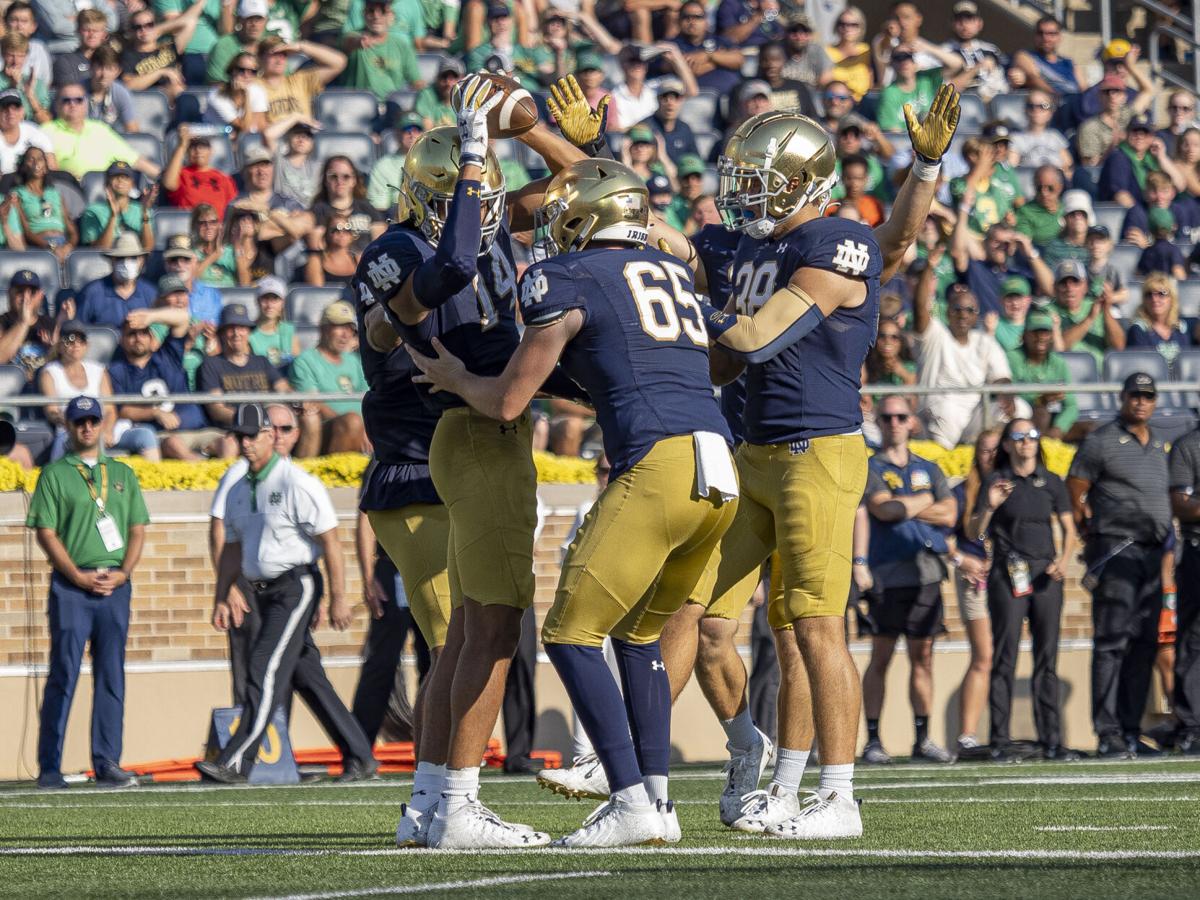 Notre Dame safety Kyle Hamilton (14) reacts after hauling in an interception during Saturday's game against Purdue at Notre Dame Stadium in South Bend. 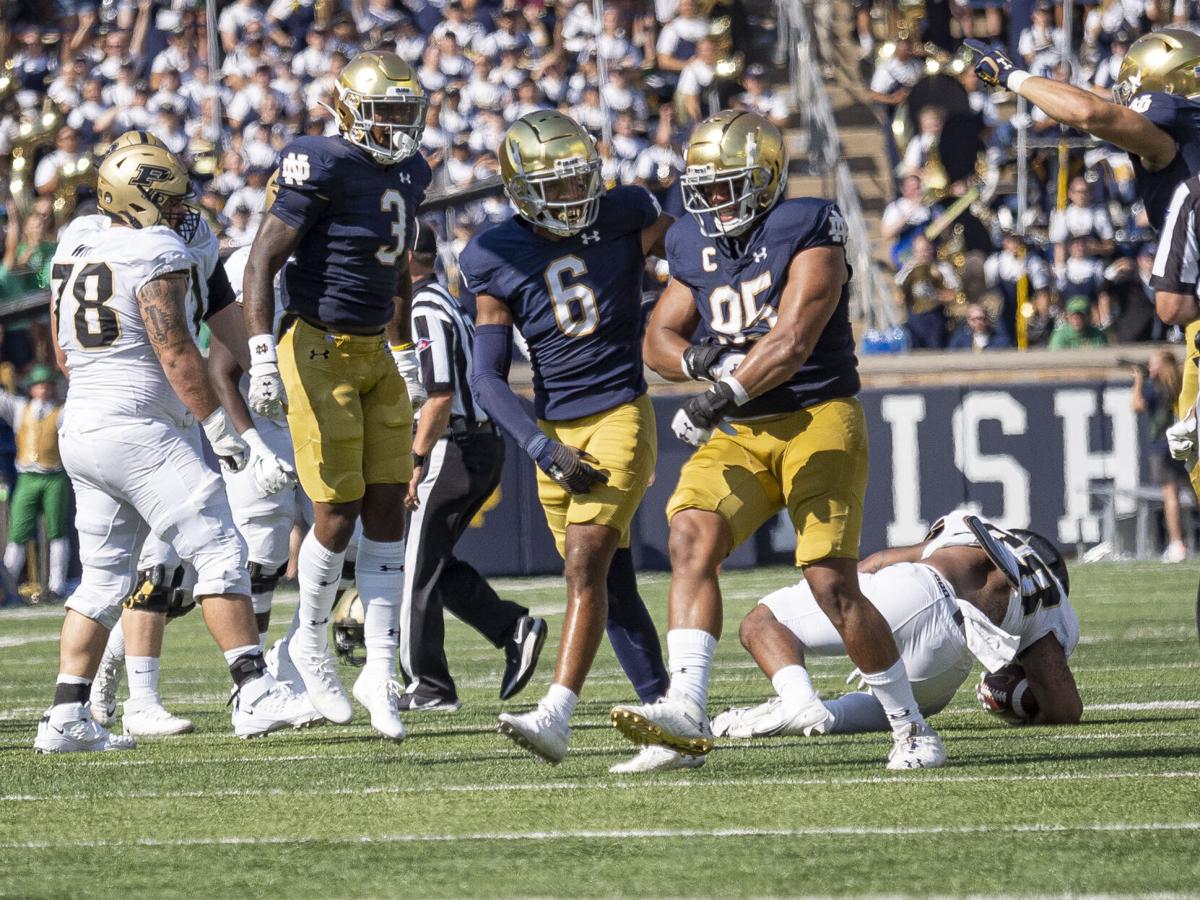 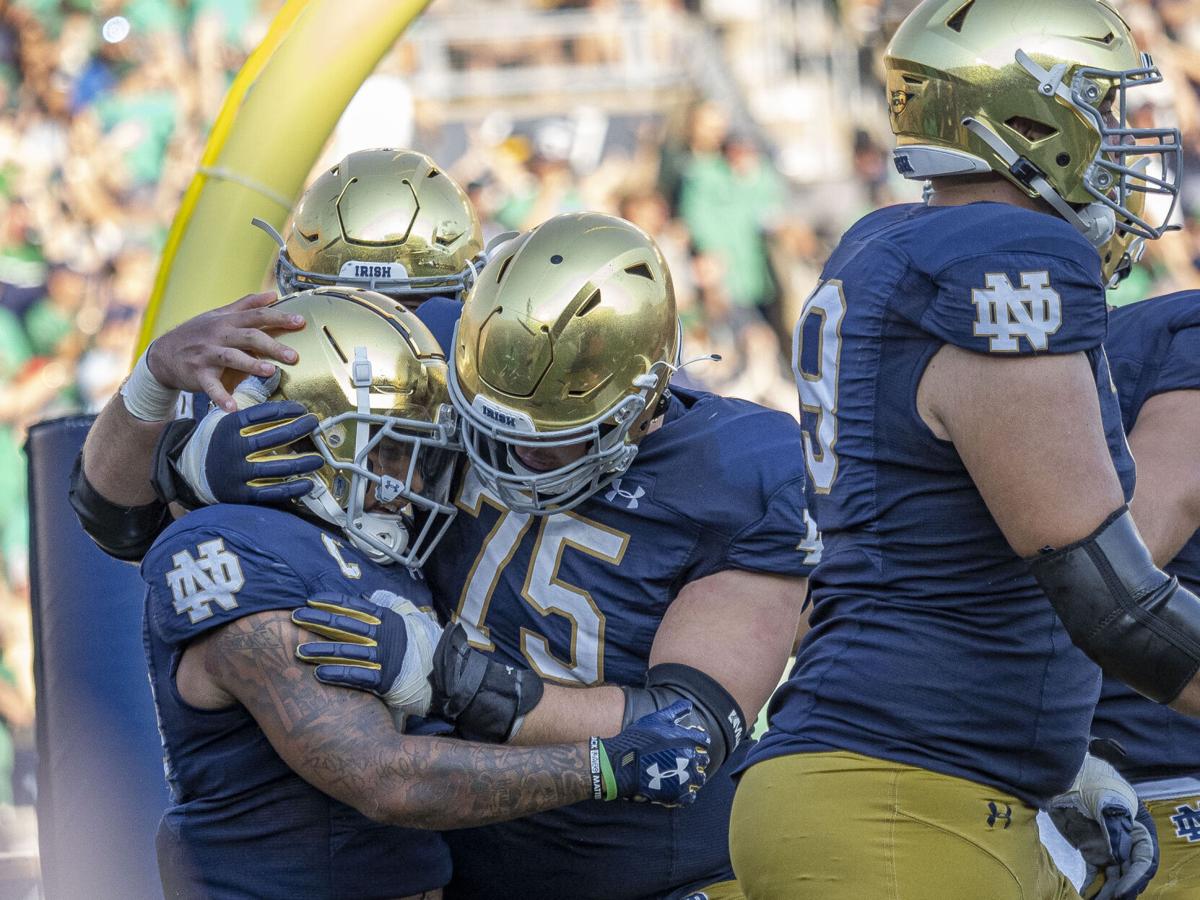 Notre Dame offensive lineman Josh Lugg (75) reacts with his teammates after a touchdown during Saturday’s game against Purdue at Notre Dame Stadium in South Bend. 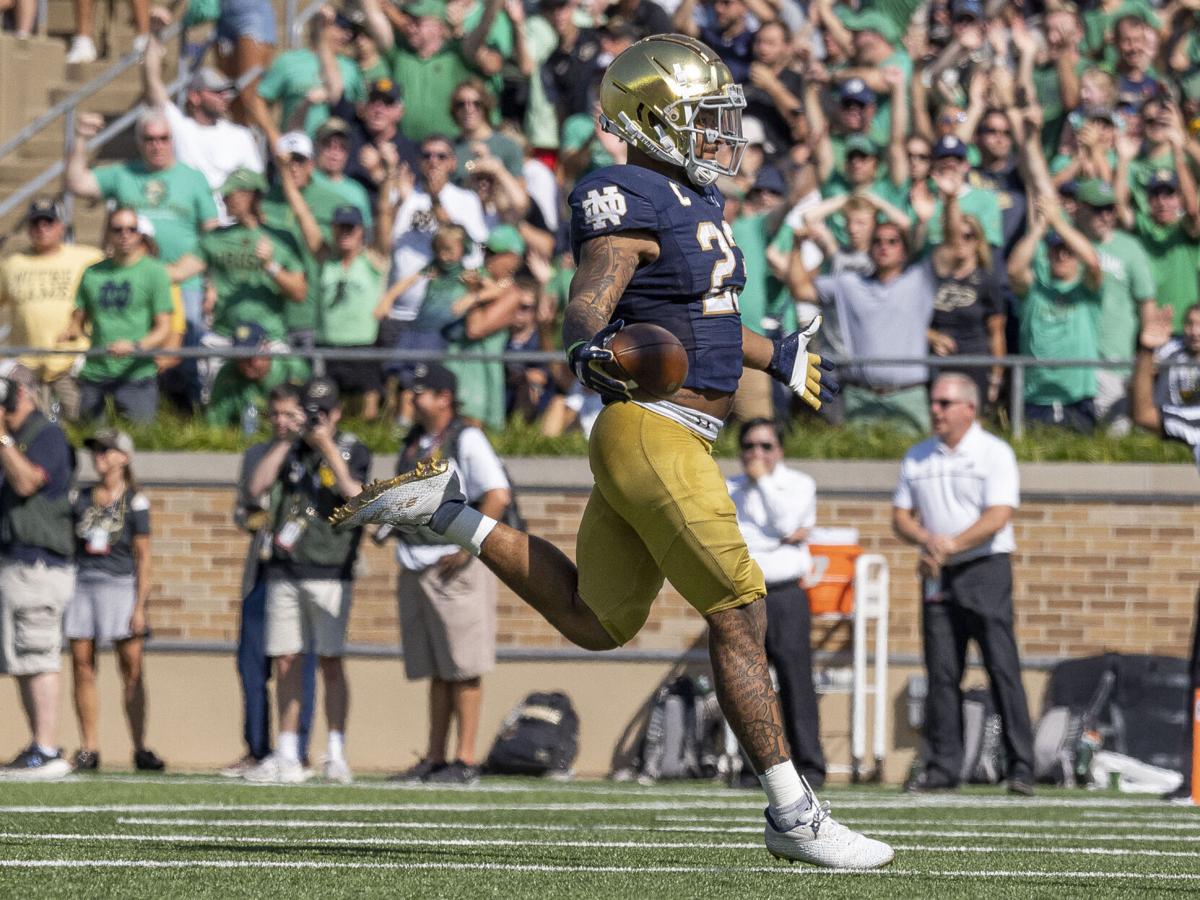 Notre Dame running back Kyren Williams (23) runs in for a touchdown during Saturday’s game against Purdue at Notre Dame Stadium in South Bend.

Notre Dame running back Kyren Williams (23) scores a touchdown in the fourth quarter against Purdue Saturday at Notre Dame Stadium in South Bend.

Notre Dame safety Kyle Hamilton (14) reacts after hauling in an interception during Saturday's game against Purdue at Notre Dame Stadium in South Bend.

Notre Dame offensive lineman Josh Lugg (75) reacts with his teammates after a touchdown during Saturday’s game against Purdue at Notre Dame Stadium in South Bend.

Notre Dame running back Kyren Williams (23) runs in for a touchdown during Saturday’s game against Purdue at Notre Dame Stadium in South Bend.

SOUTH BEND – During the first quarter of play on Saturday, it appeared the same problems that have haunted Notre Dame through the first two weeks of the season were back. The Fighting Irish offensive line was being manhandled, quarterback Jack Coan was playing inconsistently and the running game was non-existent once again.

Last week, freshman quarterback Tyler Buchner provided the spark that jump started Notre Dame’s offensive attack. This week, it was a perfect throw on a fourth down early in the second quarter that turned the tide.

Coan threaded the needle to running back Kyren Williams between two Purdue defenders for what wound up being a 39-yard touchdown that put Notre Dame up 7-3. The Boilermakers would hang within seven points for most of the game until a Williams rushing touchdown with 6:05 left put the contest out of reach and helped secure the 27-13 Irish win.

“Our level of preparation rose this week, and so did our performance,” Notre Dame head coach Brian Kelly said. “It wasn’t flawless by any means, but we played a Big Ten opponent that has some really good players. Some players that are going to play on Sundays. … I just like the fact that we’re growing, we’re getting better and we can come back now and look at what we need to continue working on.”

After Williams’ touchdown early in the second quarter, both teams settled down on the defensive side of the ball.

The Irish did manage a 28-yard field goal off the right foot of Jonathan Doerer to give Notre Dame a 10-3 advantage with just under nine minutes to play in the first half, but that’d be all the scoring before halftime.

The Irish defense was very effective throughout the game in stopping a team that had scored 79 points and gained nearly 1,000 yards from scrimmage during the first two weeks of the season. Overall, Notre Dame forced two turnovers, had three sacks and held Purdue’s offense to just 4-of-16 on third-down conversions.

The big plays that have hurt Notre Dame’s defense so far this season didn’t occur on Saturday, and the rushing defense that has been suspect held the Boilermakers to just 57 rushing yards in the contest.

“I think throughout practice this week, we really bought in,” said Notre Dame safety Kyle Hamilton of the defense. “Obviously last week, we didn’t play as well as we wanted to in all facets of the game. I thought we were a lot tighter this week and a lot more focused. … Now this can’t just be a one-game thing. We have to stack these up every week to get where we want to go.”

While the defense did its job of eliminating big plays on defense, the offense made a habit of making splash plays at the most opportune times on Saturday.

Up 10-6 early in the third quarter, Coan connected on a pass deep down the field to a streaking Avery Davis for a 62-yard score. The touchdown was important given the fact that Coan missed a couple throws to Kevin Austin Jr. earlier in the game that would’ve been good for six on both occasions.

Players like tight end Michael Mayer (one catch for five yards) and Austin Jr. (no catches) weren’t a factor against the Boilermakers, but Davis had the breakout game the senior had to have when his team needed him the most. He led all receivers with five catches for 120 yards and a touchdown.

“It was an amazing feeling,” said Davis of his touchdown grab. “I knew it was coming to me based on the look. But yeah, to finally connect on one of them it felt amazing. Jack (Coan) really played well and put the ball in the perfect spot.”

Purdue had an answer later on the following drive that went six plays for 75 yards. The Boilermakers cut the deficit to four after a fade route between Purdue quarterback Jack Plummer and wideout Milton Wright was successful from two yards out.

That’d be the closest Purdue would get though after Notre Dame dominated the fourth quarter. The Irish outscored the Boilermakers 10-0, which was highlighted by the 51-yard rushing touchdown that saw Williams bulldoze his way through multiple Purdue tacklers.

For the game, the Notre Dame running back scored two touchdowns and had 168 all-purpose yards. He managed 91 rushing yards, which was his best output so far this season.

“We were trying to just milk the clock, but sometimes plays like that just happen,” said Williams of his touchdown run. “When it’s your time and the play is called for you, you just have to make the play, and that’s what I did. That was my big emphasis this week was to run through tackles, because I don’t feel like I did that well enough last week. Running through contact was big for me this week, and I just need to continue getting better at it.”

With the win, Kelly tied Notre Dame coaching legend Knute Rockne for most wins as a head coach in program history with 105.

Notre Dame (3-0) has two tough tests over the next two weeks in No. 18 Wisconsin (1-1) and No. 8 Cincinnati (3-0). This game against Purdue was the team’s most complete performance of the season, and the Irish will have to continue to build off of it if Kelly and Co. hope to be 5-0 two weeks from Saturday.

GALLERY: Purdue vs. No. 12 Notre Dame