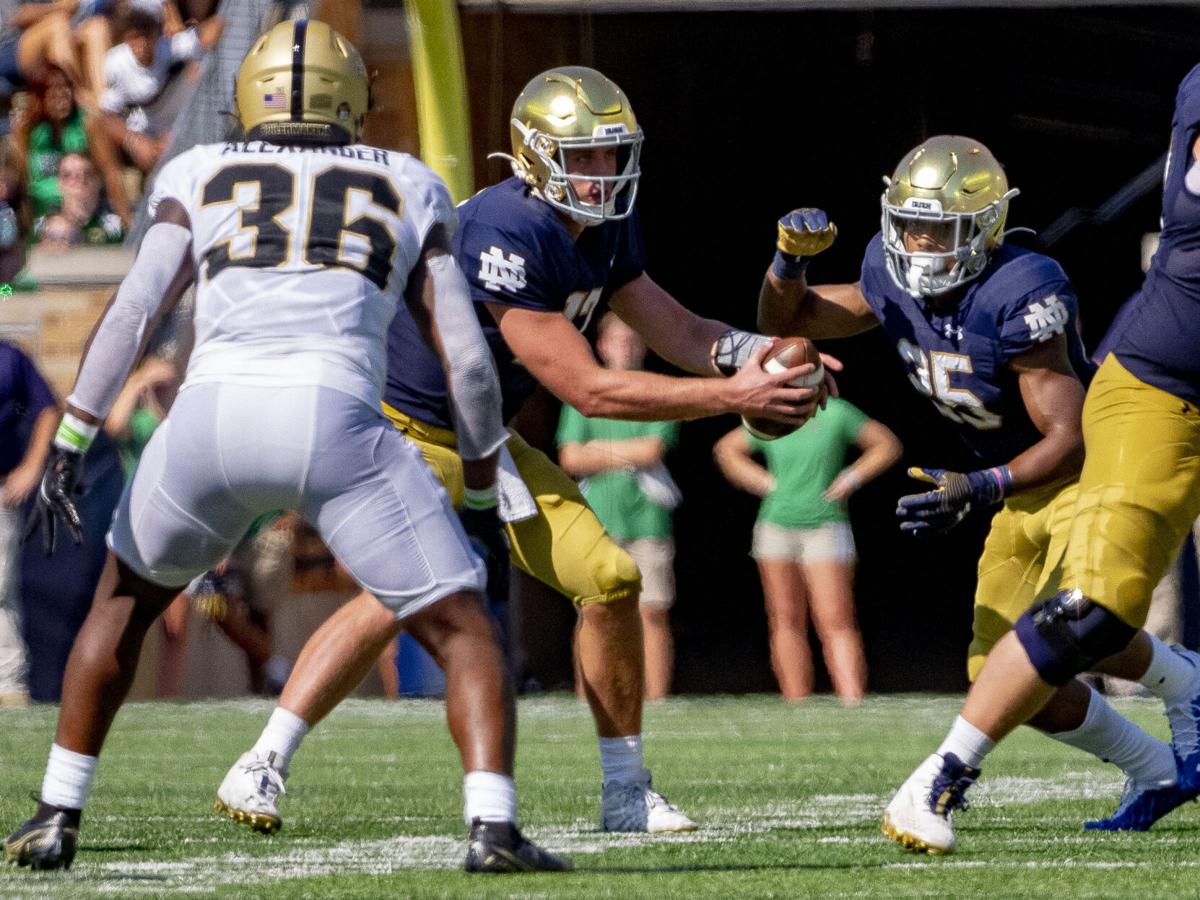 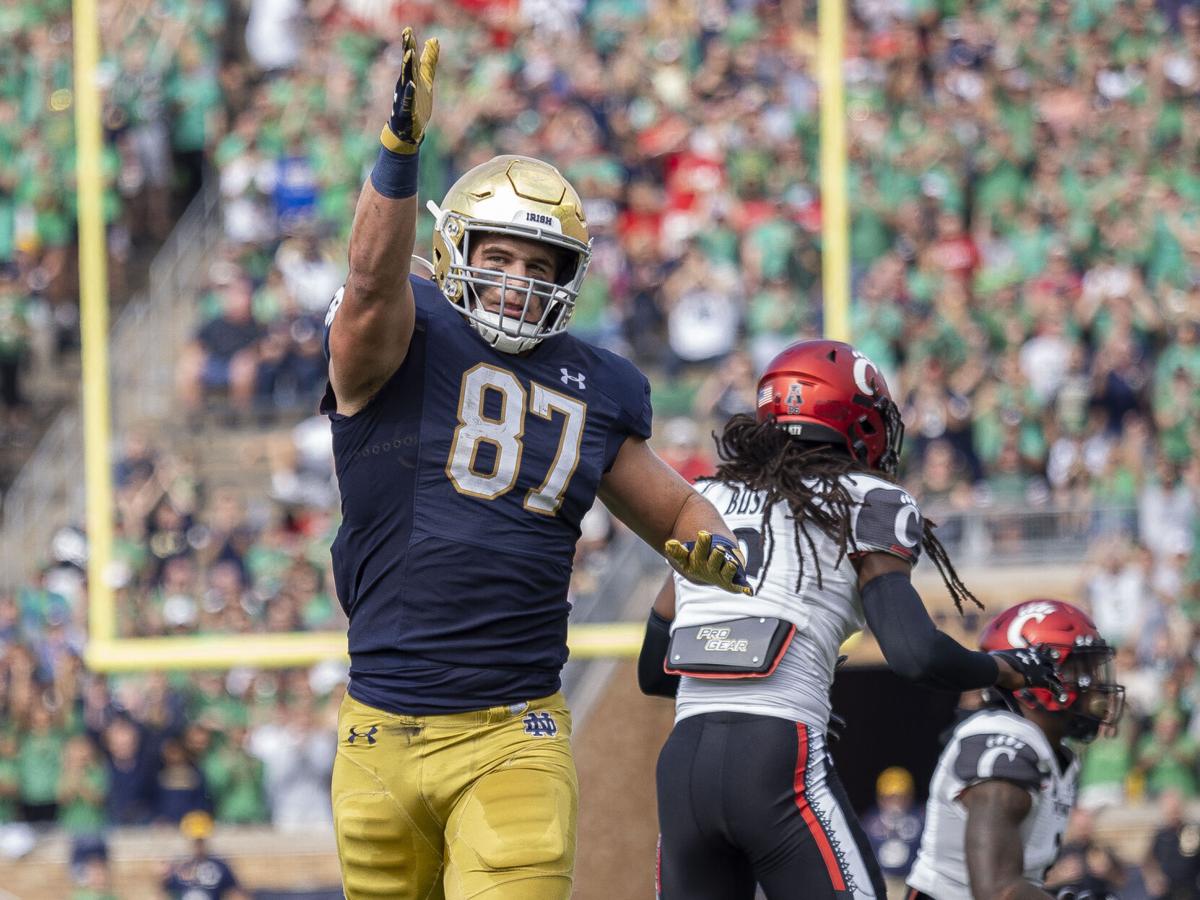 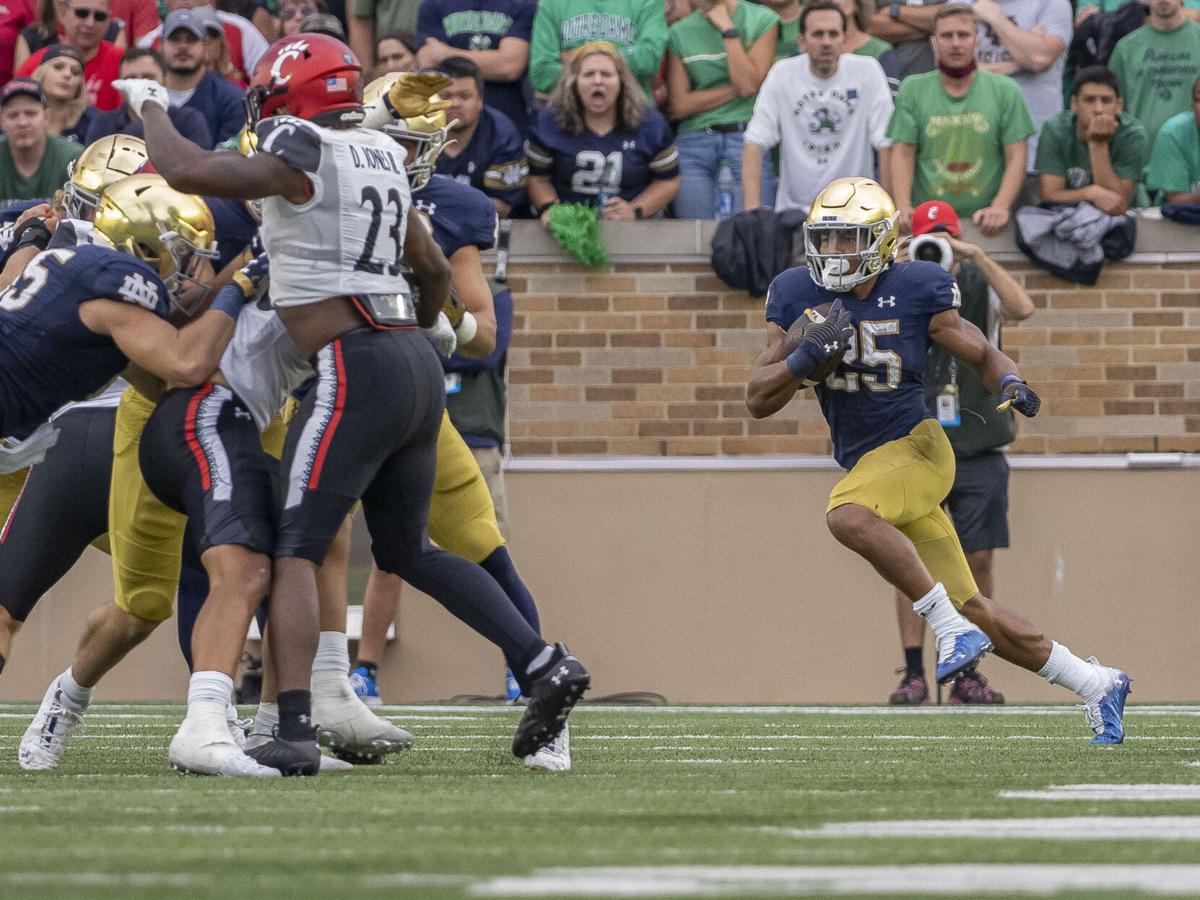 Notre Dame running back Chris Tyree (25) runs the ball for positive yards against Cincinnati at Notre Dame Stadium in South Bend on Oct. 2. 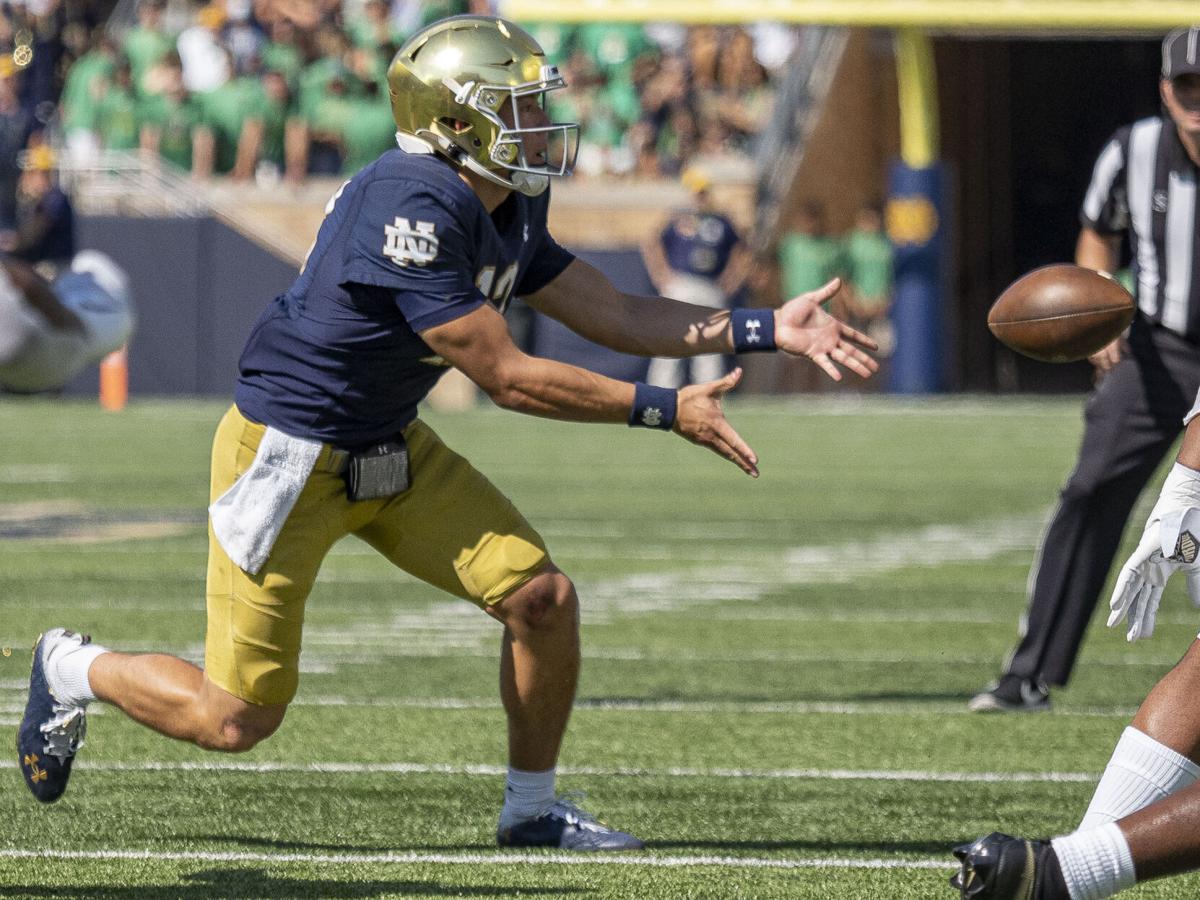 Notre Dame running back Chris Tyree (25) runs the ball for positive yards against Cincinnati at Notre Dame Stadium in South Bend on Oct. 2.

SOUTH BEND — With the first half of the season over and the bye week having just wrapped up, Notre Dame head coach Brian Kelly preached a lot about consistency during his regularly scheduled press conference this week.

Anyone who has watched all six Notre Dame football games so far this season would understand why that’s the main point of emphasis heading into this weekend’s rivalry game with Southern California.

The No. 13 Fighting Irish are 5-1, but they’ve faced a ton of obstacles during the first six weeks of the season: an up-and-down defense from week-to-week, a lack of decisiveness at the quarterback position and an injury-riddled offensive line. The list is long, yet Notre Dame has weathered several of those storms.

One glance at the remaining schedule, and it’s not hard at all imagining the Irish finishing this season at 11-1 and earning a trip to a New Year’s Six bowl game.

“We certainly got done what we needed to accomplish,” said Kelly of the bye week. “We did some self-scouting, and we did some work on USC. Some work with our players from a developmental standpoint, and we also had a chance to get some work done in the weight room. … We were able to check all of those boxes, and now we’re able to get back to it and play our rival.”

SOME STABILITY AT QB?

For the first time since the season opener against Florida State, the quarterback situation seems to have finally been cemented. Both graduate senior Jack Coan and freshman quarterback Tyler Buchner shared almost an even amount of snaps during Notre Dame’s last contest against Virginia Tech. According to Kelly, those are the two quarterbacks Irish fans will continue to see take the field on Saturdays moving forward.

“Coan continues to be the guy that gives us the best chance to win,” Kelly said. “It’ll be a mixture of him with Buchner. … Right now, in my mind, Jack will continue to start and Tyler will continue to get more playing time.”

Both quarterbacks played pretty evenly against the Hokies, with Buchner getting the nod full-time after Coan struggled early in Blacksburg. However, because Buchner made some freshman mistakes that led to costly turnovers, Coan got the opportunity to lead the team back with less than four minutes to play.

The graduate senior made the most of that chance, helping Notre Dame to 11 points and the win on the final two offensive drives.

“Coan’s looked good late in games,” Kelly said. “Those defensive lineman are chasing Tyler Buchner around all game, so they’re tiring out a little bit. So it’s definitely different during the first and second series compared to the last series. Jack also tends to speed it up a little bit during those drives. The ball comes out a little bit quicker. … We looked a lot at that during our bye week in terms of what we needed to work on earlier in the game to be more efficient.”

If those issues get cleaned up, Coan and Buchner both could put up eye-popping numbers if they can stay healthy.

Playing those caliber of defenses not only takes pressure off the quarterback position, but the offensive lineman and running backs as well, which are two areas that have looked average at best so far in 2021.

“We’ve gone up against some fine defensive structures and players that you have to pay attention to,” Kelly said. “We’ll see some of that against USC. Having said that, playing those defenses has seasoned our players, in particular the offensive linemen. … We think that after six games, it has given (our players) the opportunity to really feel confident that they can go out there and compete at a high level.”

Notre Dame’s most prolific offensive player should be back making plays at Notre Dame Stadium on Saturday when the Irish line up with USC.

Sophomore tight end Michael Mayer, who has been dealing with an adductor strain in his hip, is back after missing the game against the Hokies.

Mayer leads the team with 32 catches, 360 yards and three touchdowns this season. The Irish did just enough to win in Blacksburg without him, but his presence alone makes the Notre Dame offense both much more dynamic and much tougher to defend.

“Mayer looks to be 100%,” Kelly said. “He went through weight training and looked really good, so we feel good about him being at 100% for us.”

Other key injuries in the tight end room were discussed as well. Freshman Cane Berrong was lost for the year after tearing his ACL, while Kevin Bauman is expected back sometime over the next two weeks. Bauman’s been sidelined since fracturing his fibula against FSU.

Running back Chris Tyree – who dealt with turf toe during Virginia Tech week – practiced during the bye week and looks primed to play against USC. In addition, Buchner’s also close to 100% after he played banged up against the Hokies.