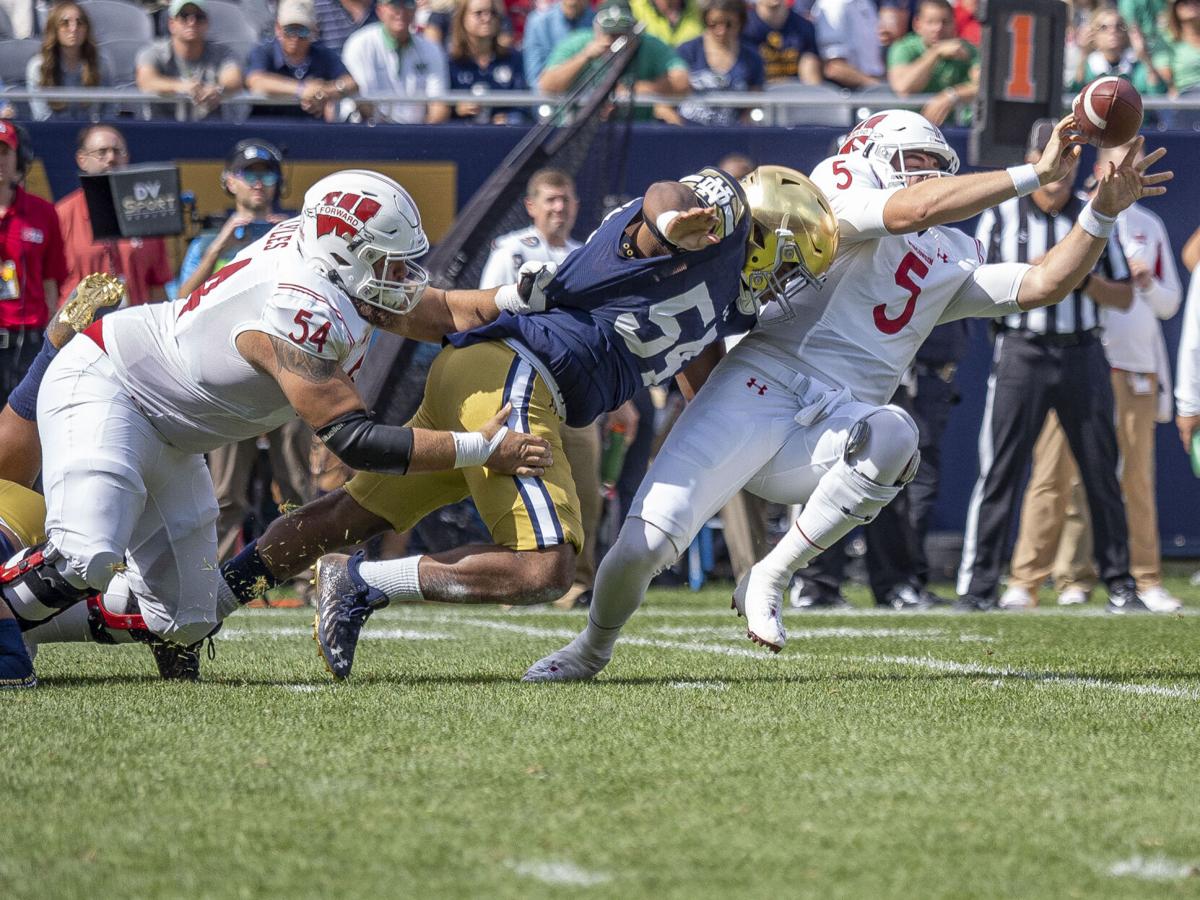 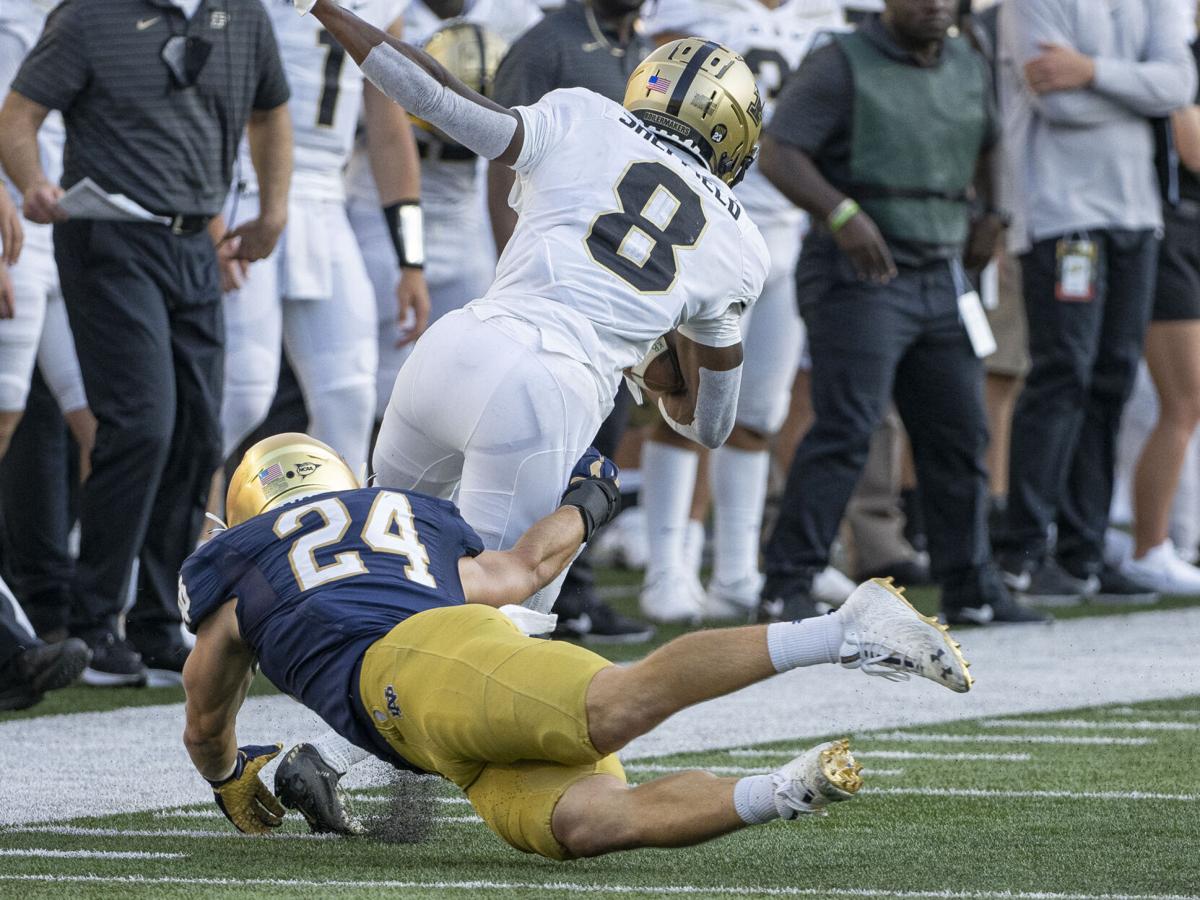 Notre Dame linebacker Jack Kiser (24) tackles Purdue wide receiver TJ Sheffield during their game on Sept. 18 at Notre Dame Stadium in South Bend. Kiser had an interception return for a touchdown in the fourth quarter against Wisconsin this past Saturday. 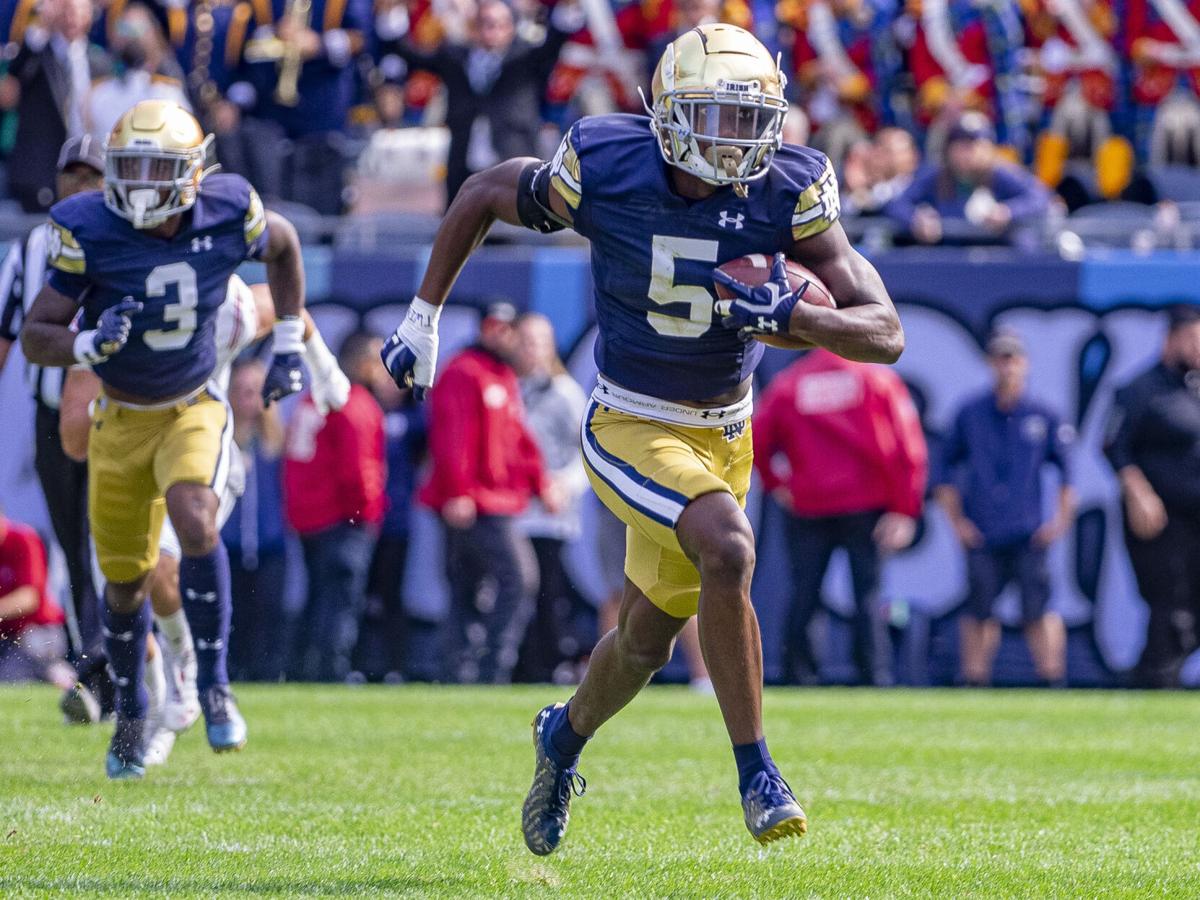 Notre Dame defensive back Cam Hart runs after earning one of two interceptions against Wisconsin Saturday at Soldier Field in Chicago.

Notre Dame linebacker Jack Kiser (24) tackles Purdue wide receiver TJ Sheffield during their game on Sept. 18 at Notre Dame Stadium in South Bend. Kiser had an interception return for a touchdown in the fourth quarter against Wisconsin this past Saturday.

Notre Dame defensive back Cam Hart runs after earning one of two interceptions against Wisconsin Saturday at Soldier Field in Chicago.

CHICAGO — For Wisconsin to have success offensively, they have to run effectively and possess the football at a high rate.

Heading into their bout with Notre Dame, the Badgers ran for 532 yards in two games against Penn State and Eastern Michigan. Chez Mellusi and Isaac Guerendo came into the contest with 100-yard rushing games under their belts, and with Notre Dame missing nose tackle Kurt Hinish, it seemed Wisconsin had a shot to run wild on a suspect Fighting Irish rushing defense.

Instead, the Irish defense built off its solid performance against Purdue, shutting down the Badgers in the run game (74 yards on 28 attempts) while keeping Wisconsin off the field at a higher rate (31:23 to 28:37 time of possession in favor of Notre Dame).

A big key to that victory in time of possession came from Notre Dame’s ability to get off the field on third down. Wisconsin was only 1-of-14 on Saturday in converting on third down. If you combine that performance with the one against Purdue, teams are just 5-of-30 on third down against Notre Dame the last two weeks.

“With coach (Marcus) Freeman, his attack mindset has allowed us to go out there and make plays,” Notre Dame defensive back Cam Hart said. “I really give credit to our defensive lineman. Just going out there on third down and having a dog mentality to get after the quarterback. That makes things a lot easier for us on the back end.”

With how well Wisconsin’s defense was playing against a Notre Dame offense that was missing starting quarterback Jack Coan for a majority of the second half, it was imperative for the defense to come up big and make plays for the Irish to win.

After quarterback Drew Pyne turned the ball over to the Badgers at Notre Dame’s 40 late in the third, a touchdown drive from Wisconsin could’ve been a death blow for the Irish. Instead, Notre Dame’s defense stepped up by holding the Badgers to a short field goal. That stop allowed Chris Tyree’s kickoff return touchdown to put Notre Dame ahead in a game where points were hard to come by during the first three quarters.

With the run game being virtually non-existent for the Badgers, the Irish had the advantage all fourth quarter. Wisconsin quarterback Graham Mertz, who has become known for his erratic passing ability over the past two seasons, was forced to put the ball in the air for his team late in the game. He looked uncomfortable in the pocket all day, and the Irish took full advantage during the final quarter of play.

Mertz tossed three interceptions late in the game, and each one resulted in touchdowns for Notre Dame. The first came from Hart near midfield, which setup a six-play, 46-yard drive that ended with a 16-yard touchdown to Kevin Austin Jr. from Pyne to make it 24-13.

The next one was hauled in by linebacker Jack Kiser, who then sprinted down the Wisconsin sideline for a 66-yard score. Senior linebacker Drew White added to the fun when he was the beneficiary of a tipped pass that fell into his arms. He’d run in from 48 yards out to top off what was an exceptional defensive performance.

“It’s surreal,” said Hart of the turnovers. “Going back to camp, we have this thing called 'get gold', which emphasizes things like turnovers and getting our hands on the ball. So just to see us being able to get pick-sixes and get after the quarterback and get pass breakups like that is insane.”

While Notre Dame head coach Brian Kelly said Coan’s injury isn’t believed to be severe, the defense’s ability to create turnovers and shutdown the opposition could become that much more critical if the offense struggles without the graduate senior.

Freeman’s system took a couple games to grow into for this defense, but over the last two games, his players are playing a lot more aggressive and free. Their continued evolution as the season goes on will be essential for the Irish if they hope to find themselves in the College Football Playoff conversation again in December.

“I think I’ve alluded to this when I’ve answered questions about our defense,” Kelly said. “It takes some time to get everything in. There’s layers to our defense. We played a lot of man early on. We’ve added some dime and nickel packages. And quite frankly, we have some guys making plays. Cam’s a great example of that. … We just continue to develop. Marcus is starting to get his players to develop on defense, and we’ve been adding some layers to the defense as well. This team practices and prepares well, and they have a really good way about them of flipping (in games).”